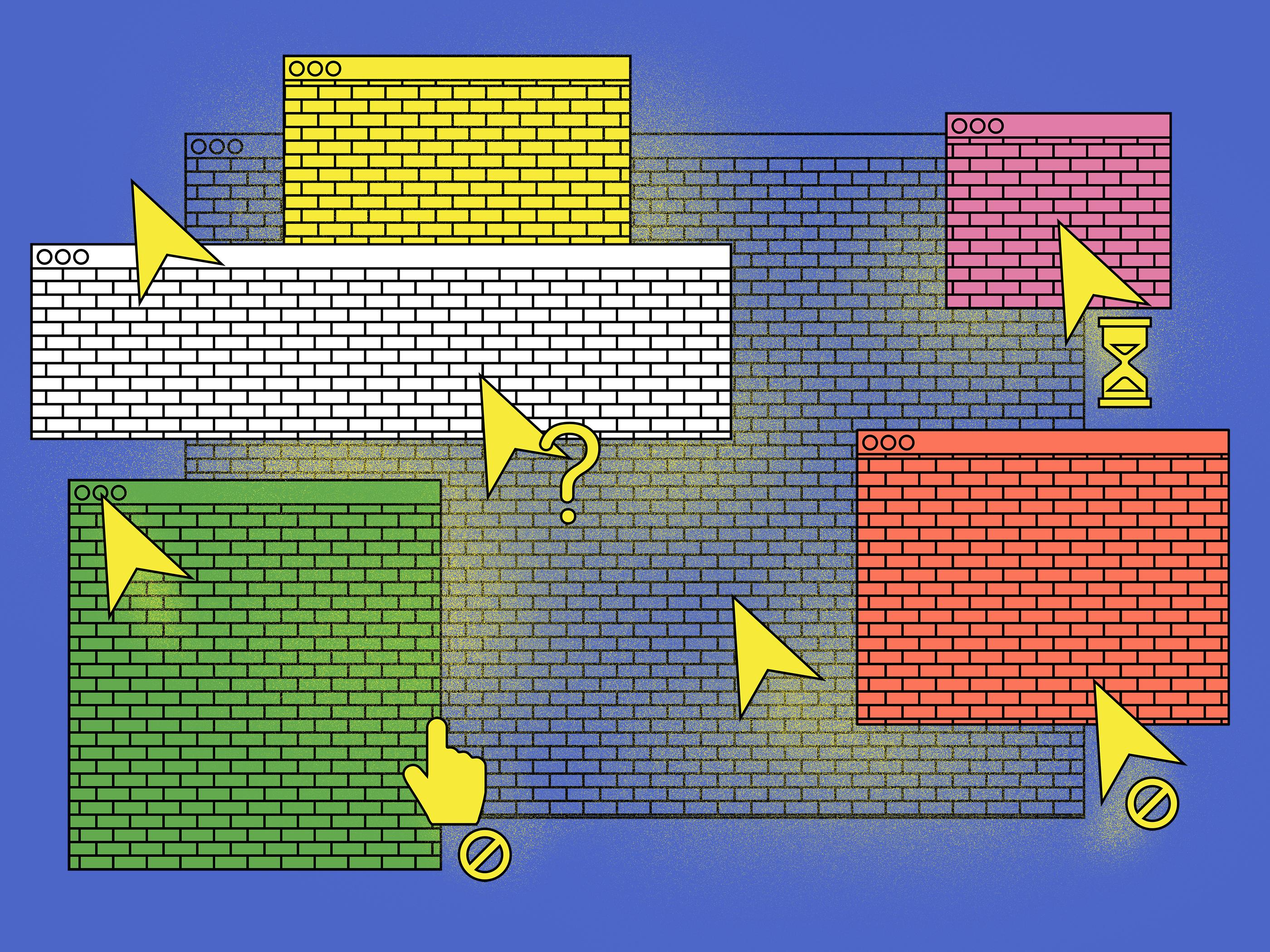 The internet can be a hostile space for 15 percent of the world’s population who experience some form of disability.

Try navigating a website as someone who is visually impaired: Turn on voice command on your computer (Command ⌘ + F5  if you’re on a Mac, enable Navigator if you’re on a PC) and go to Amazon’s Kindle store. You’ll quickly find out that those who rely on voice commands can’t skip around and are doomed to listen to every notation about every page element before getting to the one piece of information they need.

“It’s a crime that the most versatile device on the planet—the computer—has not adapted well to people who need help,” laments Vint Cerf, the “father of the internet,” who co-authored the net’s communication protocol with Bob Kahn. The 75-year old computer scientist knows this pain point first hand having been born with a hearing impairment and color blindness.

The internet was a welcoming place when Cerf conceived of it. Email, for instance, originated as an assistive device that allowed the deaf to receive messages accurately. He developed its protocols, in part, to communicate with his wife Sigrid, who is deaf. Cerf often recounts the story about how she got the proper cochlear implants quickly when she communicated with doctors via email. “It’s a great equalizer in that everyone, hearing and deaf, uses the same technology,” he said to the New York Times in 1998.

But as websites got flashier, the experience has quickly become a source of frustration for disabled users. Despite the internet’s potential to improve their lives—from ordering groceries to communicating with friends—going online is an even more stressful prospect for many. A 2016 Pew Research survey found that only 40 percent of disabled Americans feel comfortable using the internet compared to 80 percent of able-bodied users. In the UK, less than 30 percent are online.

Using his platform as Google’s “chief internet evangelist,” Cerf has been proselytizing about how bad design results in injustice. ”It’s almost criminal that programmers have not had their feet held to the fire to build interfaces that are accommodating for people with vision problems or hearing problems or motor problems,” Cerf says.

To navigate a website, people with vision impairments, for instance, listen to short phrases describing each element on a webpage. But in the rush to meet deadlines, web developers often skip the process of tagging photos, graphics and buttons adequately unless they’re required by law. In the US, only federal agencies and their contractors are required to make information accessible to people with disabilities and even that isn’t consistently enforced. Accessibility is often treated as a stage 2 project, after a webpage is launched.

Gifs Can Do Harm

Creating a more accessible internet rests on the shoulders of designers and developers who make web content. The good news is that it requires relatively simple actions. In fact, there’s already a blueprint for it, explains Towson University computer science professor Jonathan Lazar. ”If we can just get people to use what we already know to do, that is fantastic! That’s the challenge,” he tells Quartz.

A resource called Web Content Accessibility Guidelines (WCAG) outlines strategies and resources for creating accessible sites. Authored and vetted by a cadre of international experts, WCAG was updated this year to include best practices for mobile devices.

Many WCAG recommendations echo the basic principles of good web design. This includes making pages work well in landscape and portrait display orientations; promoting the use of autofill forms; and making sure that  default font sizes are at a comfortable reading setting.

In 2017, the FBI arrested Maryland resident John Rayne Rivello for tweeting a strobing gif to embattled journalist Kurt Eichenwald with the words: “You deserve a seizure for your posts.” The New York Times reports that Eichenwald, who has epilepsy, immediately suffered a seizure upon seeing the animated message on his Twitter feed. His lawyer described the malicious tweet as “no different than a bomb sent in the mail or anthrax sent in an envelope.” These short looping videos often fail WCAG principles because they can’t be stopped by the user and a descriptive file name for screen readers is often missing. (There’s an endless scroll of uncategorized gifs on Giphy uploaded as “gif1,” for example.)

Getting web developers to implement WCAG’s best practices is difficult because accessibility is often an afterthought. This prejudice is even reflected in the very layout of web design textbooks, notes Rachel Olivero, director of technology at the National Federation of the Blind. “A lot of the textbooks and online training address accessibility as a side bar,” she says. “How many times do you skip over the asides because you’re in a hurry? It’s not taught as the right way to do it, so only the people who know accessibility are those who have to and not just anyone building sites.”

In the US, only federal agencies are required to produce accessible materials to comply with Section 508 of the Rehabilitation Act. And even then, many government agencies fail to implement guidelines adequately. Like textbook sidebars, the role of the Section 508 coordinator is often treated as a side job at many budget-strapped US agencies.

“There are some agencies where someone is told, ‘By the way, you kinda work in technology, so we’re going to make you the 508 coordinator,'” says Lazar who has documented the struggles of Section 508 coordinators (pdf). “Even if they have the interest and the passion, they don’t have the time, budget, nor proper training to implement it well,” he attests.

Lazar suggests software companies could train designers to build accessible sites. In a lecture at Google in July 2017, he proposed a scenario where software prompts designers to follow WCAG principles, as part of the normal production process. For instance, what if design tools required designers to add tags to every element they introduce, much like commerce sites compel us to supply personal data to proceed with a transaction. The key, Lazar says, is to make it the standard.

Major tech companies actually offer great accessibility features in their products. Apple, in particular, is regarded as the industry trailblazer when it comes to assistive technology and its efforts have been applauded by the American Foundation for the Blind . The problem, oftentimes, isn’t the lack of solutions but the lack of awareness outside disability communities.

Accessibility features are still often buried in sub-menus. Adobe Illustrator, for instance, has a useful, but little-known  Color Blind Proof Setup Mode, which gives graphic designers a preview of how their work will be perceived by individuals with red-green colorblindness. Lazar argues that we need to make accessibility tools apparent for people who don’t need them. “Why don’t we just make accessibility so much more obvious?” he says. “Minor changes have big impact.” He  applauds Microsoft for updating its Office software with a “check accessibility” button that appears on the top menu. The button scans the document and generates a list of items that are problematic for persons with disability. By placing it in a prominent spot, the button also serves as a reminder for authors to  think about accessibility. 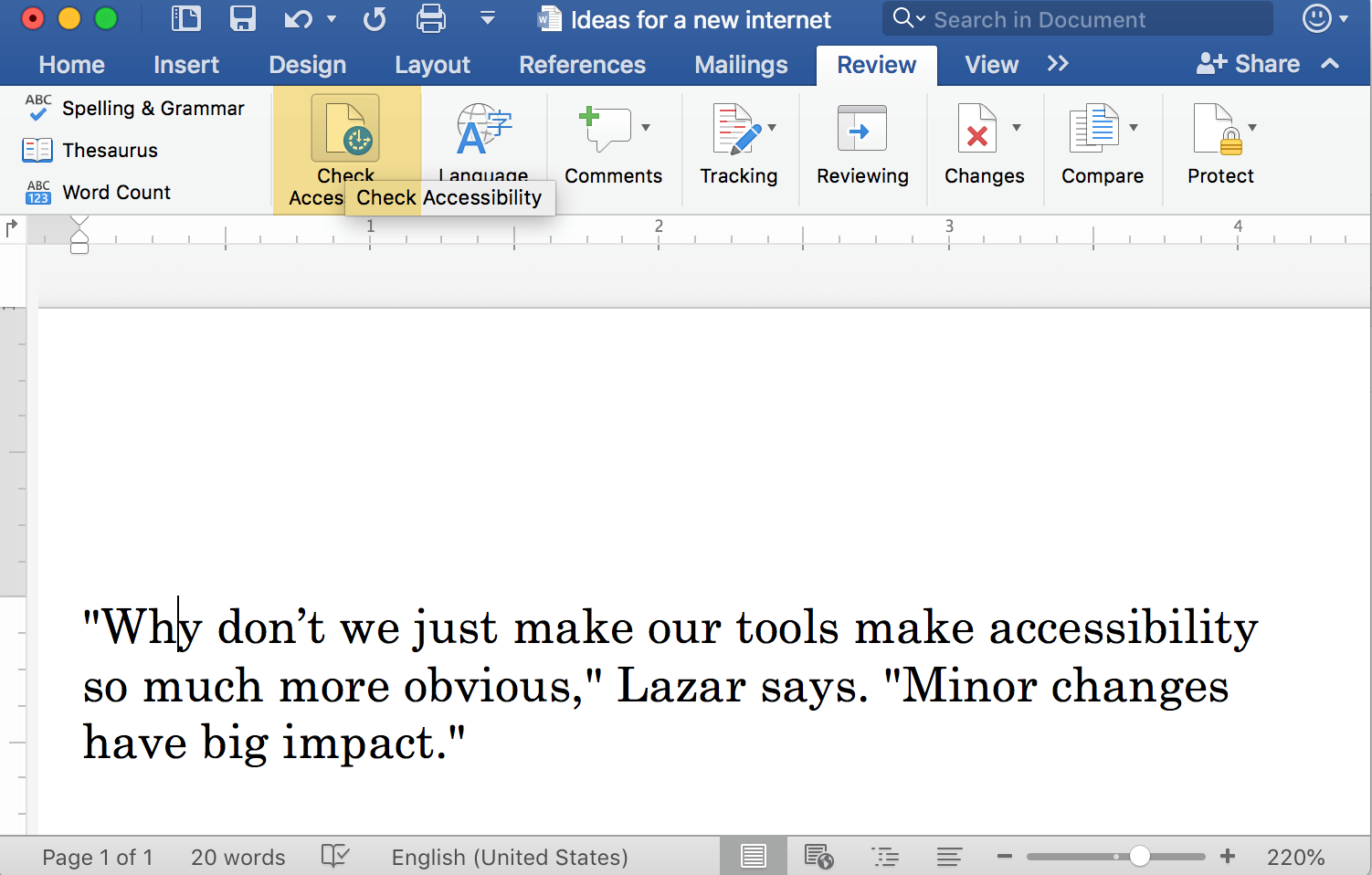 Top of mind. Photo from Quartz .

Design that considers the needs of disabled users can benefit a company’s bottom line. A 2016 Microsoft-funded investigation about the economic value of accessible technologies to companies suggests several advantages for employees from increased talent diversity, boost in productivity, and increased retention. For customers, showing a company cares about accessibility engenders loyalty and generates repeat business.

There’s a particularly dramatic return for online businesses. For instance, UK insurance company  Legal & General Group doubled its online traffic in three months when it redesigned its website to make it accessible to disabled people. It recovered the cost of the redesign  within 12 months.

Similarly, CNET improved its SEO and saw a 30 percent spike in Google traffic after adding transcripts of videos in 2016. “Between the easy-to-crawl site outlines, the relevant keywords found on the alt-text [descriptor text] for all of the images, and the adherence to best practices, accessible sites are prime picking for Google’s algorithms and tend to rank more highly in searches,” explains web developer Helena McCabe.

Neglecting accessibility can be disastrous to businesses. In the UK alone, Business Disability International estimates that 70 percent of customers with access needs close out of websites that are hard to navigate. They estimate that £11.75 billion ($15.3 billion)—called the “ click away pound“—is lost when disabled customers click away of sites. Companies that invest in accessible technologies have a better chance of capturing the $8 trillion that people with disabilities and their families around the world spend each year. Inaccessible sites also present a legal risk. The  landmark case on the matter involves Target Corporation paying $6 million to settle a class action lawsuit in 2008 because its website was inaccessible to users with vision impairments. Filed by the National Federation of the Blind, the case cited the e-commerce giant’s lack of alt tags that help blind users parse the site.

Kat Holmes, who previously led the Inclusive Design practice at Microsoft, notes that accessible design can even lead to innovation. “There’s a long history of innovations designed with and by excluded communities that have become a part of everyday life for many more people,” she explains to Quartz. Closed captioning, touchscreen mobile devices, audiobooks, and even the keyboard all originated as assistive technology, like Cerf did with email.

Ultimately, perhaps the biggest motivation for improving accessibility on the web boils down to a selfish reason. “There is one reason for inclusion that transcends all other justifications: uncertainty,” writes Holmes in  Mismatch How Inclusion Shapes Design. “Many of us are temporarily able bodied and will face exclusion as we age. When we design for inclusion, we’re designing for our future selves.”