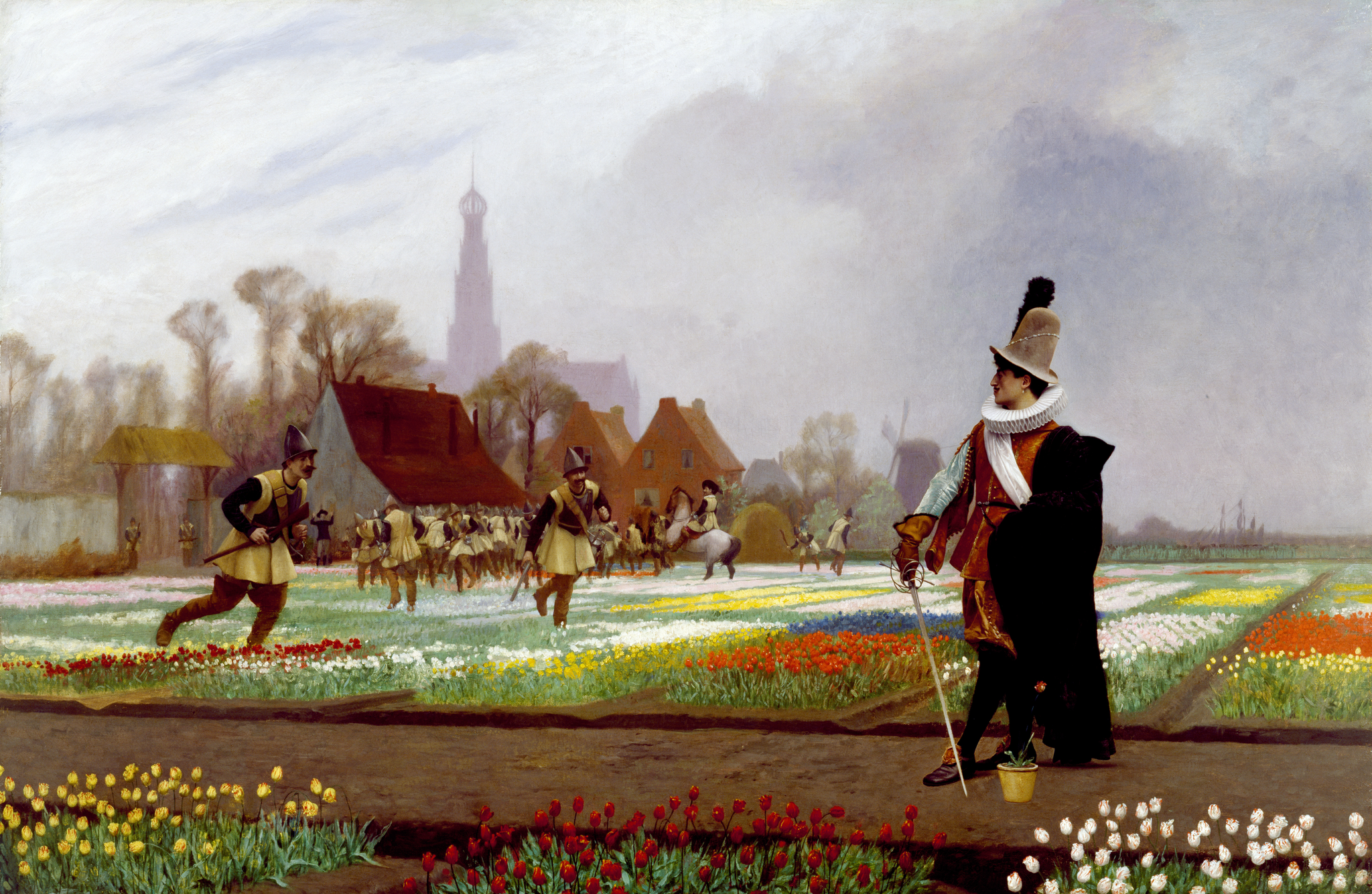 When tulips came to the Netherlands, all the world went mad. A sailor who mistook a rare tulip bulb for an onion and ate it with his herring sandwich was charged with a felony and thrown in prison. A bulb named Semper Augustus, notable for its flame-like white and red petals, sold for more than the cost of a mansion in a fashionable Amsterdam neighborhood, complete with coach and garden. As the tulip market grew, speculation exploded, with traders offering exorbitant prices for bulbs that had yet to flower. And then, as any financial bubble will do, the tulip market imploded, sending traders of all incomes into ruin.

For decades, economists have pointed to 17th-century tulipmania as a warning about the perils of the free market. Writers and historians have reveled in the absurdity of the event. The incident even provides the backdrop for the film Tulip Fever, based on a novel of the same name by Deborah Moggach.

The only problem: none of these stories are true.

What really happened and how did the story of Dutch tulip speculation get so distorted? Anne Goldgar discovered the historical reality when she dug into the archives to research her book, Tulipmania: Money, Honor, and Knowledge in the Dutch Golden Age.

“I always joke that the book should be called ‘Tulipmania: More Boring Than You Thought,’” says Goldgar, a professor of early modern history at King’s College London. “People are so interested in this incident because they think they can draw lessons from it. I don’t think that’s necessarily the case.”

But before you even attempt to apply what happened in the Netherlands to more recent bubbles—the South Sea Bubble in 1700s England, the 19th-century railway bubble, the dot-com bubble and bitcoin are just a few comparisons Goldgar has seen—you have to understand Dutch society at the turn of the 17th century.

For starters, the country experienced a major demographic shift during its war for independence from Spain, which began in the 1560s and continued into the 1600s. It was during this period that merchants arrived in port cities like Amsterdam, Haarlem and Delft and established trading outfits, including the famous Dutch East India Company. This explosion in international commerce brought enormous fortune to the Netherlands, despite the war. In their newly independent nation, the Dutch were mainly led by urban oligarchies comprised of wealthy merchants, unlike other European countries of the era, which were controlled by landed nobility. As Goldgar writes in her book, “The resultant new faces, new money and new ideas helped to revolutionize the Dutch economy in the late 16th century.”

As the economy changed, so, too, did social interactions and cultural values. A growing interest in natural history and a fascination with the exotic among the merchant class meant that goods from the Ottoman Empire and farther east fetched high prices. The influx of these goods also drove men of all social classes to acquire expertise in newly in-demand areas. One example Goldgar gives is fish auctioneer Adriaen Coenen, whose watercolor-illustrated manuscript Whale Book allowed him to actually meet the President of Holland. And when Dutch botanist Carolus Clusius established a botanical garden at the University of Leiden in the 1590s, the tulip quickly rose to a place of honor.

Originally found growing wild in the valleys of the Tien Shan Mountains (at the border where China and Tibet meet Afghanistan and Russia), tulips were cultivated in Istanbul as early as 1055. By the 15th century, Sultan Mehmed II of the Ottoman Empire had so many flowers in his 12 gardens that he required a staff of 920 gardeners. Tulips were among the most prized flowers, eventually becoming a symbol of the Ottomans, writes gardening correspondent for The Independent Anna Pavord in The Tulip.

The Dutch learned that tulips could be grown from seeds or buds that grew on the mother bulb; a bulb that grows from seed would take 7 to 12 years before flowering, but a bulb itself could flower the very next year. Of particular interest to Clusius and other tulip traders were “broken bulbs”—tulips whose petals showed a striped, multicolor pattern rather than a single solid color. The effect was unpredictable, but the growing demand for these rare, “broken bulb” tulips led naturalists to study ways to reproduce them. (The pattern was later discovered to be the result of a mosaic virus that actually makes the bulbs sickly and less likely to reproduce.) “The high market price for tulips to which the current version of tulipmania refers were prices for particularly beautiful broken bulbs,” writes economist Peter Garber. “Since breaking was unpredictable, some have characterized tulipmania among growers as a gamble, with growers vying to produce better and more bizarre variegations and feathering.”

After all the money Dutch speculators spent on the bulbs, they only produced flowers for about a week—but for tulip lovers, that week was a glorious one. “As luxury objects, tulips fit well into a culture of both abundant capital and new cosmopolitanism,” Goldgar writes. Tulips required expertise, an appreciation of beauty and the exotic, and, of course, an abundance of money.

Here’s where the myth comes into play. According to popular legend, the tulip craze took hold of all levels of Dutch society in the 1630s. “The rage among the Dutch to possess them was so great that the ordinary industry of the country was neglected, and the population, even to its lowest dregs, embarked in the tulip trade,” wrote Scottish journalist Charles Mackay in his popular 1841 work Extraordinary Popular Delusions and the Madness of Crowds. According to this narrative, everyone from the wealthiest merchants to the poorest chimney sweeps jumped into the tulip fray, buying bulbs at high prices and selling them for even more. Companies formed just to deal with the tulip trade, which reached a fever pitch in late 1636. But by February 1637, the bottom fell out of the market. More and more people defaulted on their agreement to buy the tulips at the prices they’d promised, and the traders who had already made their payments were left in debt or bankrupted. At least that’s what has always been claimed.

In fact, “There weren’t that many people involved and the economic repercussions were pretty minor,” Goldgar says. “I couldn’t find anybody that went bankrupt. If there had been really a wholesale destruction of the economy as the myth suggests, that would’ve been a much harder thing to face.”

That’s not to say that everything about the story is wrong; merchants really did engage in a frantic tulip trade, and they paid incredibly high prices for some bulbs. And when a number of buyers announced they couldn’t pay the high price previously agreed upon, the market did fall apart and cause a small crisis—but only because it undermined social expectations.

“In this case it was very difficult to deal with the fact that almost all of your relationships are based on trust, and people said, ‘I don’t care that I said I’m going to buy this thing, I don’t want it anymore and I’m not going to pay for it.’ There was really no mechanism to make people pay because the courts were unwilling to get involved,” Goldgar says.

But the trade didn’t affect all levels of society, and it didn’t cause the collapse of industry in Amsterdam and elsewhere. As Garber, the economist, writes, “While the lack of data precludes a solid conclusion, the results of the study indicate that the bulb speculation was not obvious madness.”

So if tulipmania wasn’t actually a calamity, why was it made out to be one? We have tetchy Christian moralists to blame for that. With great wealth comes great social anxiety, or as historian Simon Schama writes in The Embarrassment of Riches: An Interpretation of Dutch Culture in the Golden Age, “The prodigious quality of their success went to their heads, but it also made them a bit queasy.” All the outlandish stories of economic ruin, of an innocent sailor thrown in prison for eating a tulip bulb, of chimney sweeps wading into the market in hopes of striking it rich—those come from propaganda pamphlets published by Dutch Calvinists worried that the tulip-propelled consumerism boom would lead to societal decay. Their insistence that such great wealth was ungodly has even stayed with us to this day.

“Some of the stuff hasn’t lasted, like the idea that God punishes people who are overreaching by causing them to have the plague. That’s one of the things people said in the 1630s,” Goldgar says. “But the idea that you get punished if you overreach? You still hear that. It’s all, ‘pride goes before the fall.’”

Goldgar doesn’t begrudge novelists and filmmakers for taking liberties with the past. It’s only when historians and economists neglect to do their research that she gets irked. She herself didn’t set out to be a mythbuster—she only stumbled upon the truth when she sat down to look through old documentation of the popular legend. “I had no way of knowing this existed before I started reading these documents,” Goldgar says. “That was an unexpected treasure.”

Lorraine Boissoneault is a contributing writer to SmithsonianMag.com covering history and archaeology. She has previously written for The Atlantic, Salon, Nautilus and others. She is also the author of “The Last Voyageurs: Retracing La Salle's Journey Across America.”