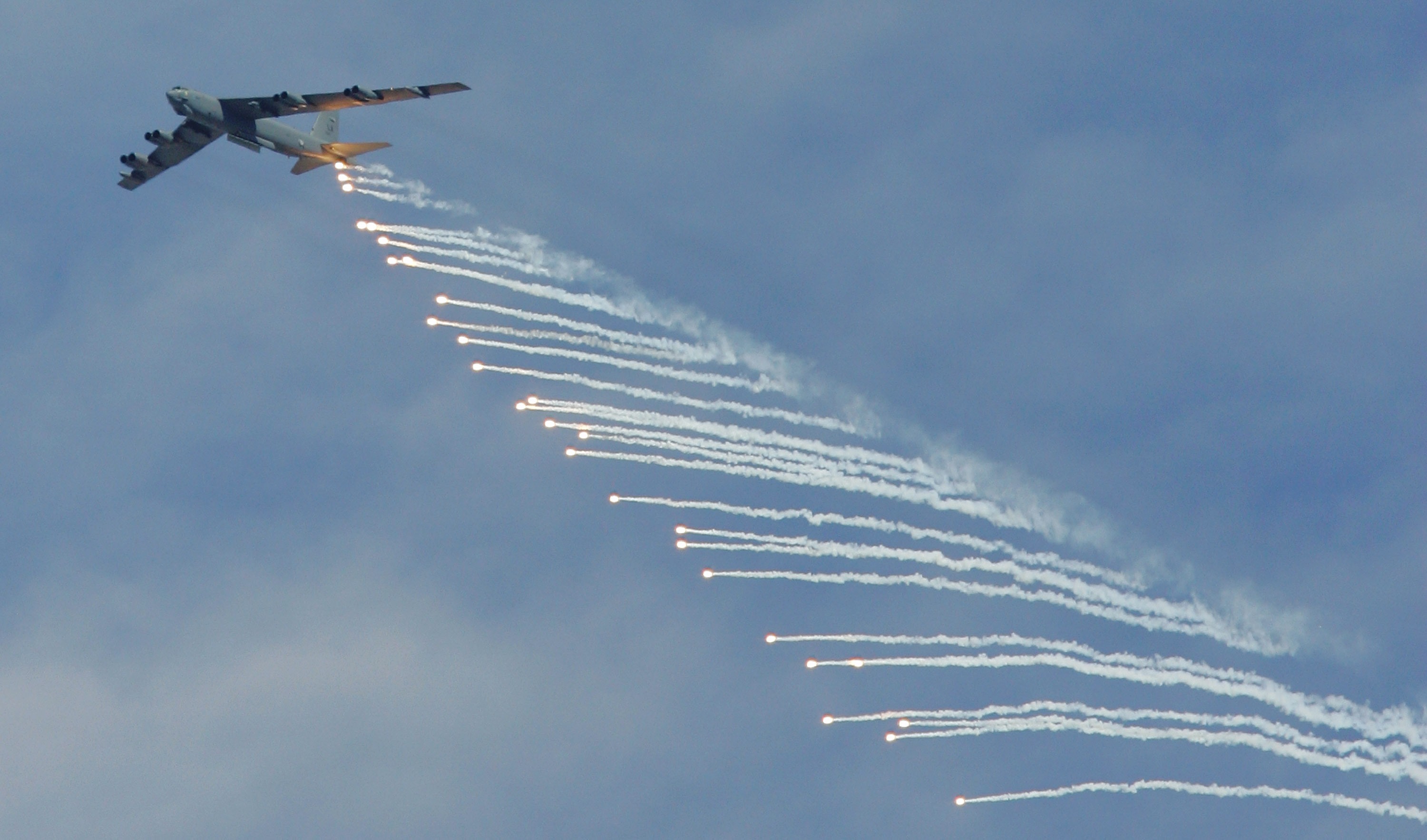 A B-52 Stratofortress drops flares during a U.S. Air Force firepower demonstration at the Nevada Test and Training Range on Sept. 14, 2007. Photo by Ethan Miller / Getty Images.

On June 4, 2013, the city of Huntsville, Alabama was enjoying a gorgeous day. Blue skies, mild temperatures. Just what the forecasters had predicted.

But in the post-lunch hours, meteorologists started picking up what seemed to be a rogue thunderstorm on the weather radar. The “blob,” as they referred to it, mushroomed on the radar screen. By 4 PM, it covered the entire city of Huntsville. Strangely, however, the actual view out of peoples’ windows remained a calm azure.

The source of the blob turned out to be not a freak weather front, but rather a cloud of radar chaff, a military technology used by nations all across the globe today. Its source was the nearby Redstone Arsenal, which, it seems, had decided that a warm summer’s day would be perfect for a completely routine military test.

More surprising than the effect that radar chaff has on modern weather systems, though, is the fact that its inventor’s life’s work was obscured by the haze of a male-centric scientific community’s outdated traditions.

The inventor of radar chaff was a woman named Joan Curran.

Born Joan Strothers and raised in Swansea on the coast of Wales, she matriculated at the University of Cambridge’s Newnham College in 1934. Strothers studied physics on a full scholarship and enjoyed rowing in her spare time. Upon finishing her degree requirements in 1938, she went to the University’s preeminent Cavendish Laboratory to begin a doctorate in physics.

At the Cavendish, Strothers was assigned to work with a young man named Samuel Curran. For two years, Strothers got along swimmingly with her new lab partner. But with international conflict brewing in Europe, in 1940 the pair was transferred twice to work on military research, and ended up at Exeter.

There, the two developed proximity fuses to destroy enemy planes and rockets. There also, Strothers married Sam and took on his last name, becoming Joan Curran. Shortly after their wedding in November, the Currans transferred to the Telecommunications Research Establishment (TRE) in the autumn of 1940. Curran joined a team led by British physicist and scientific military intelligence expert R.V. Jones that was developing a method to conceal aircraft from enemy radar detection.

The idea, Jones later explained in his book Most Secret War, was simple. Radar detectors measure the reflection of radio waves of a certain wavelength off of incoming objects. As it turns out, thin metal strips can resonate with incoming waves, and also re-radiate the waves. Under the right conditions, the re-radiated waves create the sonic impression of a large object when in reality, there is none—hence, the blob in Alabama.

This property means that a few hundred thin reflectors could, together, reflect as much energy as a heavy British bomber plane would. A collection of strips might conceal the exact location of an aircraft during a raid behind a large cloud of signal, or even lead the enemy to believe they were observing a major attack when in reality, there was only one or two planes.

By the time Pearl Harbor was attacked in 1941, Curran was nearly a year into painstaking experiments on using metals to reflect radar signals. She had tried a seemingly countless number of sizes and shapes, from singular wires to metal leaflets the size of notebook paper. The leaflets had been a particularly interesting idea, since they could do double-duty as propaganda sheets with text printed on them.

In 1942, Curran finally settled on reflectors that were about 25 centimeters long and 1.5 centimeters wide. The reflectors were aluminized paper strips bundled into one-pound packets and intended to be thrown out of the leading aircraft. When defenestrated from a stream of bombers once every minute, they could produce “the radar equivalent of a smokescreen,” according to Jones.

In 1943, the reflector strips were put to a serious military test when the Allies launched Operation Gomorrah on Hamburg, Germany. Operation Gomorrah was a brutal campaign of air raids that lasted over a week, destroyed most of the city and resulted in almost 40,000 civilian deaths. But with rates of only 12 aircraft losses out of 791 on one evening’s bombing raid, the campaign was a major victory for the Allies, in large part due to Curran’s reflectors.

Perhaps most notably, radar chaff was used as part of a large-scale, elaborate diversion on June 5, 1944 to prevent German forces from knowing exactly where the Allied invasion into Nazi-held continental Europe would begin. Deployed on the eve of what would become known as D-Day, two radar chaff drops, Operations Taxable and Glimmer, were combined with hundreds of dummy parachutists to draw German attention towards the northernmost parts of France, and away from the beaches of Normandy.

Curran went on to work on many more scientific and military technologies in both the UK and U.S., including the Manhattan Project. She is remembered as being a truly unique and skilled researcher, and was lauded in her obituary for having “the scientific equivalent of gardening green fingers.”

But despite her impressive body of work, Curran’s legacy was obscured due to the customs of the time. In fact, Curran did not actually possess a degree from Cambridge when she did all of her remarkable war-winning work. This was not for reasons of merit—she had, of course, completed all her coursework for an honors degree in physics—but only because in that day and age, women were simply not granted degrees, despite completing all the work and being hired to continue their studies.

In 1987, Curran was finally awarded an honorary degree of Doctor of Laws by the University of Strathclyde. She died in 1999.

In her obituary, Jones was quoted as having said, “In my opinion, Joan Curran made an even greater contribution to [Allied World War II victory] than Sam.” Like many other female scientists who have faded unrecognized into history, Curran and her work was discussed only by men, and only in the context of that of her male counterparts. And her own words have never been published, nor recorded in interviews, making her voice unavailable to generations of female scientists who followed in her footsteps.

According to Jess Wade, a postdoctoral scholar studying solid state physics at Imperial College London and who also creates Wikipedia pages for female scientists, it’s crucial that we tell the stories of Curran and other scientists whose work has been obscured.

“We don’t know how many women were working in the labs of famous male scientists, or how many discoveries women contributed to, because for centuries men did a very good job hiding the achievements of women,” Wade remarked in an email.

This sense of urgency is echoed in the work of organizations like the National Math and Science Initiative (NMSI), an education nonprofit organization based in Dallas, Texas. “It’s important for young girls to see women who are achieving in this field, to give them hope, excitement and encouragement that it is totally possible to achieve this dream,” said NMSI communications manager Lauren Little.

NMSI focuses on developing culturally relevant teaching to encourage underrepresented groups like women to careers in these fields. Such teaching includes stories like Curran’s, which are crucial to tell now because it’s vital to “find [uncelebrated scientists’] family members and interview them before it is too late,” wrote Wade.

We are in an age where female scientists are, at last, getting their due. They’re being recognized through a number of efforts—a poster series intended to be hung in lab and classroom walls and a bestselling anthology of women in science. Outreach organizations like 500 Women Scientists are working towards increasing diversity in science through public speaking events, consulting gigs and political campaign support. And stories of women in science are entering mainstream media through television shows, feature films and documentaries.

Curran’s life and work may not be splashy enough for a TV show, nor well-documented enough for a book. But she still deserves a place in history for changing the course of airborne warfare, and for confusing the heck out of 21st century weathermen.