The Way You Think About Willpower Is Hurting You

Willpower is not a limited resource. 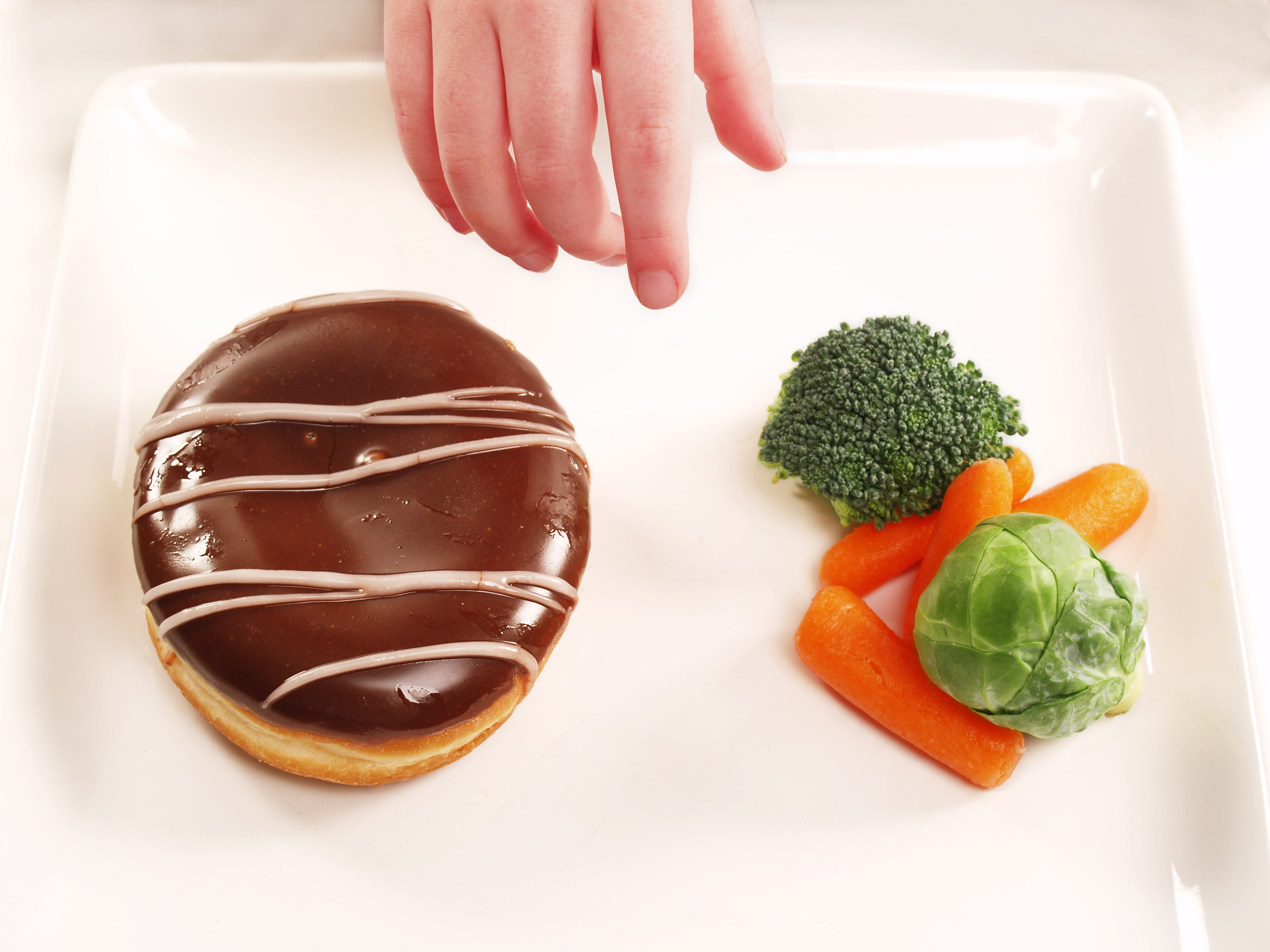 Not so long ago, my after work routine looked like this: After a particularly grueling day, I'd sit on the couch and veg for hours, doing my solo version of "Netflix and chill," which meant keeping company with a cold pint of ice cream. I knew the ice cream, and the sitting, were probably a bad idea, but I told myself this was my well-deserved "reward" for working so hard.

Psychological researchers have a name for this phenomenon: it’s called “ego depletion.” The theory is that willpower is connected to a limited reserve of mental energy, and once you run out of that energy, you’re more likely to lose self-control. This theory would seem to perfectly explain my after-work indulgences.

But new studies suggest that we’ve been thinking about willpower all wrong, and that the theory of ego depletion isn’t true. Even worse, holding on to the idea that willpower is a limited resource can actually be bad for you, making you more likely to lose control and act against your better judgment.

One of the most pervasive bits of folk psychology may be the belief that self-control is somehow “spent.” The idea received scientific support in the late 1990s, when the psychologist Roy Baumeister and his colleagues at Case Western Reserve University put it to the test, conducting an experiment that has since been cited over three thousand times by their academic peers. In the study, the researchers asked two sets of test subjects to wait in a room where there were two plates of food. One plate held fresh-baked cookies, their scent wafting through the room. On the other plate lay dull red and white radishes. Each group was allowed to eat from only one plate but not the other. The thinking went that the group allowed to eat only radishes would have to expend serious willpower to resist eating the cookies. Next, the researchers gave both groups a puzzle to work on. Unbeknownst to the study’s participants, the puzzle was designed to be impossible to finish. The researchers wanted to see which group would work on the task longer, and anticipated that the people in the radish group—who would have spent significant reserves of energy trying not to eat the cookies—would give up on the puzzle sooner. That’s exactly what happened. The study participants who had denied themselves cookie yumminess lasted an average of just eight minutes, while the cookie eaters (and a control group who did only the puzzle-solving part of the experiment) lasted nineteen minutes. The study concluded that the radish eaters’ egos had clearly been depleted. But had they? In 2011, Baumeister teamed up with the New York Times journalist John Tierney to publish Willpower: Rediscovering the Greatest Human Strength. The book, with its mainstream appeal, soon became a best seller. Its authors cited several studies demonstrating the ego-depletion theory. In addition, one notable study showed a seemingly miraculous way to restore willpower: by consuming sugar. The study claimed that participants who had sipped sugar-sweetened lemonade demonstrated increased self-control and stamina on difficult tasks.

Fluke, Fake, or For Real?

The beauty of the scientific method is that it accepts, even encourages, doubt. Unlike religious miracles taken on faith or political dogma blindly accepted by party diehards, scientific studies can be tested and new evidence considered. Scientific studies (particularly those with ready-for-press conclusions) beg to be redone to determine if the effect seen in the original study was a fluke, a fake, or for real. Unfortunately for Baumeister and his collaborators, the ego-depletion theory’s proverbial cookie has begun to crumble. A 2016 study published in Perspectives on Psychological Science, which used Baumeister-approved experiments and involved over two thousand participants, attempted to reproduce Baumeister’s results but found no evidence of ego depletion. Furthermore, two additional studies, both appearing in the journal PLOS ONE, could not replicate the original study’s results. Baumeister has disputed the methodologies used in some of the follow-up studies, but more than one scientist now doubts the theory of ego depletion. The scholar Evan Carter, at the University of Miami, was one of the first to challenge Baumeister’s findings. Carter looked into a 2010 meta-analysis of nearly two hundred experiments that concluded ego depletion was real. Upon closer inspection, he discovered that the meta-analysis showed a “publication bias” in which studies that produced contradictory evidence were not included. When factoring in the results of those studies, he concluded there was no firm evidence supporting the ego-depletion theory. Furthermore, some of the more magical aspects of the theory, such as that sugar acts as a willpower juicer, have been fully debunked. For one, the sugar from a quick sip of lemonade can’t enter the bloodstream fast enough to account for any boost in mental energy. Moreover, brain experts have known for quite some time that the brain does not consume more blood sugar when working on difficult tasks. The brain is an organ, not a muscle, and thus does not consume extra energy the way a muscle would. Your brain uses the same number of calories per waking minute whether you’re working on calculus equations or watching cat videos.

Your Willpower Is Limited if You Think It Is

So what explains the phenomenon observed by researchers? After all, isn’t it common knowledge that working hard drains our energy, and that refueling, with cookies or other indulgences, makes us better able to carry on with difficult tasks? It turns out this is a classic case of how correlation does not imply causation. The anecdotal effects observed by early ego-depletion studies may have been authentic, but it now appears that researchers behind the studies jumped to the wrong conclusions. New research proposes another explanation for why we run out of steam. In a study conducted by the Stanford psychologist Carol Dweck and her colleagues, published in the journal Proceedings of the National Academy of Sciences, Dweck concluded that signs of ego depletion were observed only in test subjects who believed willpower was a limited resource. Those participants who did not see willpower as finite did not show signs of ego depletion. It appears ego depletion may be just another example of the way belief drives behavior. Thinking we’re spent makes us feel worse, while rewarding ourselves with an indulgence makes us feel better. It’s not the sugar in the lemonade that produces the sustained mental stamina, but rather the placebo effect at work. If ego depletion is essentially caused by self-defeating thoughts, one has to wonder about the harm done by this overturned hypothesis. Many people, particularly self-help gurus, still promote the idea of ego depletion, perhaps unaware of the contradictory evidence calling the theory into question. But if Dweck’s conclusions are correct, then perpetuating the idea of willpower as a finite resource is doing real harm. For one, spreading the ego-depletion hypothesis is making people less likely to actually accomplish their goals by inserting the idea in the first place, giving them reason to quit when they could otherwise persist. And ancillary propositions such as the glucose-depletion theory hit us twice. Not only do they provide a subconscious rationale for quitting prematurely, but they also fatten us up with a sugary pseudo-pick-me-up.

Baumeister says he and his colleagues are working on further studies to show ego depletion is real. It may well be that in carefully controlled lab conditions, willpower does appear to run out—even though the contradictory evidence makes this conclusion premature.

Perhaps the idea of ego depletion caught on because it satisfies a need to justify why we sometimes do things we know we shouldn’t, like slacking off at work when we should be finishing a project. But rather than looking for a hidden willpower gas tank in our heads that doesn’t exist, perhaps we should accept that we are fragile, distractible beings and cut ourselves some slack. Perhaps our flagging energies and wandering minds are trying to tell us something.

Michael Inzlicht, a professor of psychology at the University of Toronto and the principal investigator at the Toronto Laboratory for Social Neuroscience, believes willpower is not a finite resource but instead acts like an emotion. Just as we don’t “run out” of joy or anger, willpower ebbs and flows based on what’s happening to us and how we feel. Viewing willpower through this lens has profound implications.

For one, if mental energy is more like an emotion than like fuel in a tank, it can be managed and utilized as such. A toddler might throw a temper tantrum when refused a toy, but adults learn to ride out bad feelings. Similarly, when we need to perform a difficult task, it’s more productive and healthful to believe a lack of motivation is temporary than it is to tell ourselves we’re spent and need a break and some ice cream.

Most studies to date have looked at willpower as a force that helps people do things they don’t want to do, or that helps them resist temptations they’d rather give in to. But if we adjust the perspective and treat willpower as an emotion, it could instead be seen as providing insights about what we should and shouldn’t be spending our time on.

For example, whenever I feel myself easily distracted while working on an article, I know something isn’t right. If I’m checking Facebook or Twitter more than I should, I take that as a clear sign I’ve lost interest in the topic and should write about something else. If I were to force myself to power through despite my lack of interest, I’m sure I could write an article or two, but I certainly wouldn’t be able to make a lifetime career out of it.

However, when I find a topic that piques my curiosity or is in line with a cause I believe in, I get into a zone where time flies and words flow. I no longer need to force myself to write, I want to write. After a day of working on tasks requiring no willpower, I don’t feel drained, I feel energized. I don’t feel like binge-watching Netflix, I feel like telling the world about what I’m working on!

Fundamentally, we give up on tasks that don’t engage us. Doing unsolvable puzzles per the order of a social scientist in a lab coat isn’t fun, nor is it purposeful. Same goes for the mindless tasks too many people suffer through each day at work. We can power through unenjoyable tasks for a while, but we’ll never be our best if we ignore what our feelings are telling us. By listening to our lack of willpower as we would an emotion—as a helpful decision-making assistant working in concert with our logical capabilities—we can find new paths that may not require us to do things we fundamentally don’t want to do.

Just as we should seek joy indirectly by engaging in enjoyable pursuits, we can receive the benefits of willpower indirectly, by removing the need to expend it in the first place. Instead of focusing on willpower, we should look to the power of will.