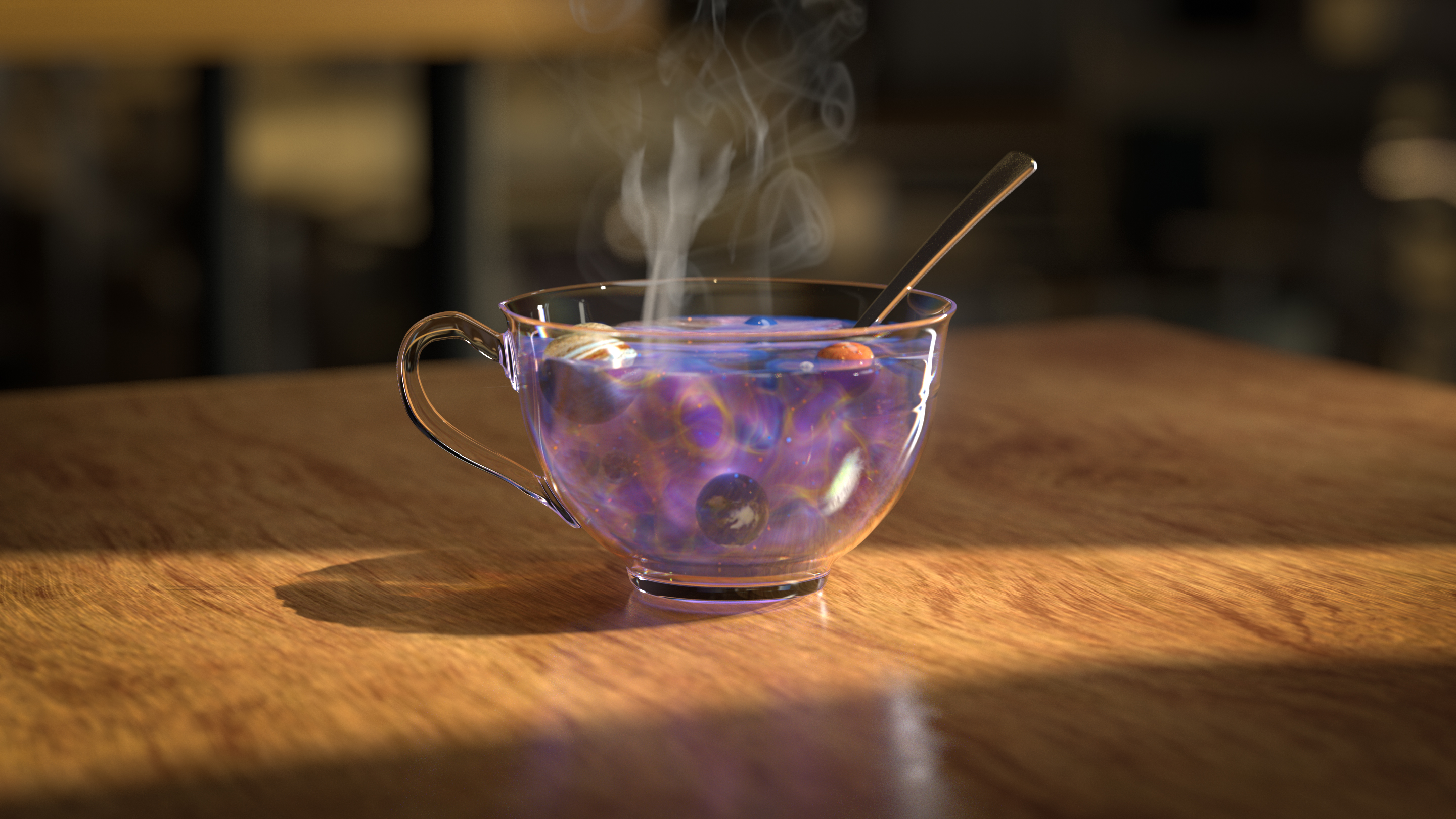 Coffee and the cosmos at large both approach thermal equilibrium. Credit: Rolando Barry for Quanta Magazine.

Pour milk in coffee, and the eddies and tendrils of white soon fade to brown. In half an hour, the drink cools to room temperature. Left for days, the liquid evaporates. After centuries, the cup will disintegrate, and billions of years later, the entire planet, sun and solar system will disperse. Throughout the universe, all matter and energy is diffusing out of hot spots like coffee and stars, ultimately destined (after trillions of years) to spread uniformly through space. In other words, the same future awaits coffee and the cosmos.

This gradual spreading of matter and energy, called “thermalization,” aims the arrow of time. But the fact that time’s arrow is irreversible, so that hot coffee cools down but never spontaneously heats up, isn’t written into the underlying laws that govern the motion of the molecules in the coffee. Rather, thermalization is a statistical outcome: The coffee’s heat is far more likely to spread into the air than the cold air molecules are to concentrate energy into the coffee, just as shuffling a new deck of cards randomizes the cards’ order, and repeat shuffles will practically never re-sort them by suit and rank. Once coffee, cup and air reach thermal equilibrium, no more energy flows between them, and no further change occurs. Thus thermal equilibrium on a cosmic scale is dubbed the “heat death of the universe.”

But while it’s easy to see where thermalization leads (to tepid coffee and eventual heat death), it’s less obvious how the process begins. “If you start far from equilibrium, like in the early universe, how does the arrow of time emerge, starting from first principles?” said Jürgen Berges, a theoretical physicist at Heidelberg University in Germany who has studied this problem for more than a decade.

Over the last few years, Berges and a network of colleagues have uncovered a surprising answer. The researchers have discovered simple, so-called “universal” laws governing the initial stages of change in a variety of systems consisting of many particles that are far from thermal equilibrium. Their calculations indicate that these systems — examples include the hottest plasma ever produced on Earth and the coldest gas, and perhaps also the field of energy that theoretically filled the universe in its first split second — begin to evolve in time in a way described by the same handful of universal numbers, no matter what the systems consist of.

The findings suggest that the initial stages of thermalization play out in a way that’s very different from what comes later. In particular, far-from-equilibrium systems exhibit fractal-like behavior, which means they look very much the same at different spatial and temporal scales. Their properties are shifted only by a so-called “scaling exponent” — and scientists are discovering that these exponents are often simple numbers like   and . For example, particles’ speeds at one instant can be rescaled, according to the scaling exponent, to give the distribution of speeds at any time later or earlier. All kinds of quantum systems in various extreme starting conditions seem to fall into this fractal-like pattern, exhibiting universal scaling for a period of time before transitioning to standard thermalization.

“I find this work exciting because it pulls out a unifying principle that we can use to understand large classes of far-from-equilibrium systems,” said Nicole Yunger Halpern, a quantum physicist at Harvard University who is not involved in the work. “These studies offer hope that we can describe even these very messy, complicated systems with simple patterns.”

Berges is widely seen as leading the theoretical effort, with a series of seminal papers since 2008 elucidating the physics of universal scaling. He and a co-author took another step this spring in a paper in Physical Review Letters that explored “prescaling,” the ramp-up to universal scaling. A group led by Thomas Gasenzer of Heidelberg also investigated prescaling in a PRL paper in May, offering a deeper look at the onset of the fractal-like behavior.

Some researchers are now exploring far-from-equilibrium dynamics in the lab, as others dig into the origins of the universal numbers. Experts say universal scaling is also helping to address deep conceptual questions about how quantum systems are able to thermalize at all.

There’s “chaotic progress on various fronts,” said Zoran Hadzibabic of the University of Cambridge. He and his team are studying universal scaling in a hot gas of potassium-39 atoms by suddenly dialing up the atoms’ interaction strength, then letting them evolve.

When Berges began studying far-from-equilibrium dynamics, he wanted to understand the extreme conditions at the beginning of the universe when the particles that now populate the cosmos originated.

These conditions would have occurred right after “cosmic inflation” — the explosive expansion of space thought by many cosmologists to have jump-started the Big Bang. Inflation would have blasted away any existing particles, leaving only the uniform energy of space itself: a perfectly smooth, dense, oscillating field of energy known as a “condensate.” Berges modeled this condensate in 2008 with collaborators Alexander Rothkopf and Jonas Schmidt, and they discovered that the first stages of its evolution should have exhibited fractal-like universal scaling. “You find that when this big condensate decayed into the particles that we observe today, that this process can be very elegantly described by a few numbers,” he said.

To understand what this universal scaling phenomenon looks like, consider a vivid historical precursor of the recent discoveries. In 1941, the Russian mathematician Andrey Kolmogorov described the way energy “cascades” through turbulent fluids. When you’re stirring coffee, for instance, you create a vortex on a large spatial scale. Kolmogorov realized that this vortex will spontaneously generate smaller eddies, which spawn still smaller eddies. As you stir the coffee, the energy you inject into the system cascades down the spatial scales into smaller and smaller eddies, with the rate of the transfer of energy described by a universal exponential decay factor of , which Kolmogorov deduced from the fluid’s dimensions.

Kolmogorov’s “” always seemed mysterious, even as it served as a cornerstone of turbulence research. But now physicists have been finding essentially the same cascading, fractal-like universal scaling phenomenon in far-from-equilibrium dynamics. According to Berges, energy cascades probably arise in both contexts because they are the most efficient way to distribute energy across scales. We instinctively know this. “If you want to distribute your sugar in your coffee, you stir it,” Berges said — as opposed to shaking it. “You know that’s the most efficient way to redistribute energy.”

There’s one key difference between the universal scaling phenomenon in far-from-equilibrium systems and the fractal eddies in a turbulent fluid: In the fluid case, Kolmogorov’s law describes energy cascading across spatial dimensions. In the new work, researchers see far-from-equilibrium systems undergoing fractal-like universal scaling across both time and space.

Take the birth of the universe. After cosmic inflation, the hypothetical oscillating, space-filling condensate would have quickly transformed into a dense field of quantum particles all moving with the same characteristic speed. Berges and his colleagues conjecture that these far-from-equilibrium particles then exhibited fractal scaling governed by universal scaling exponents as they began the thermal evolution of the universe. 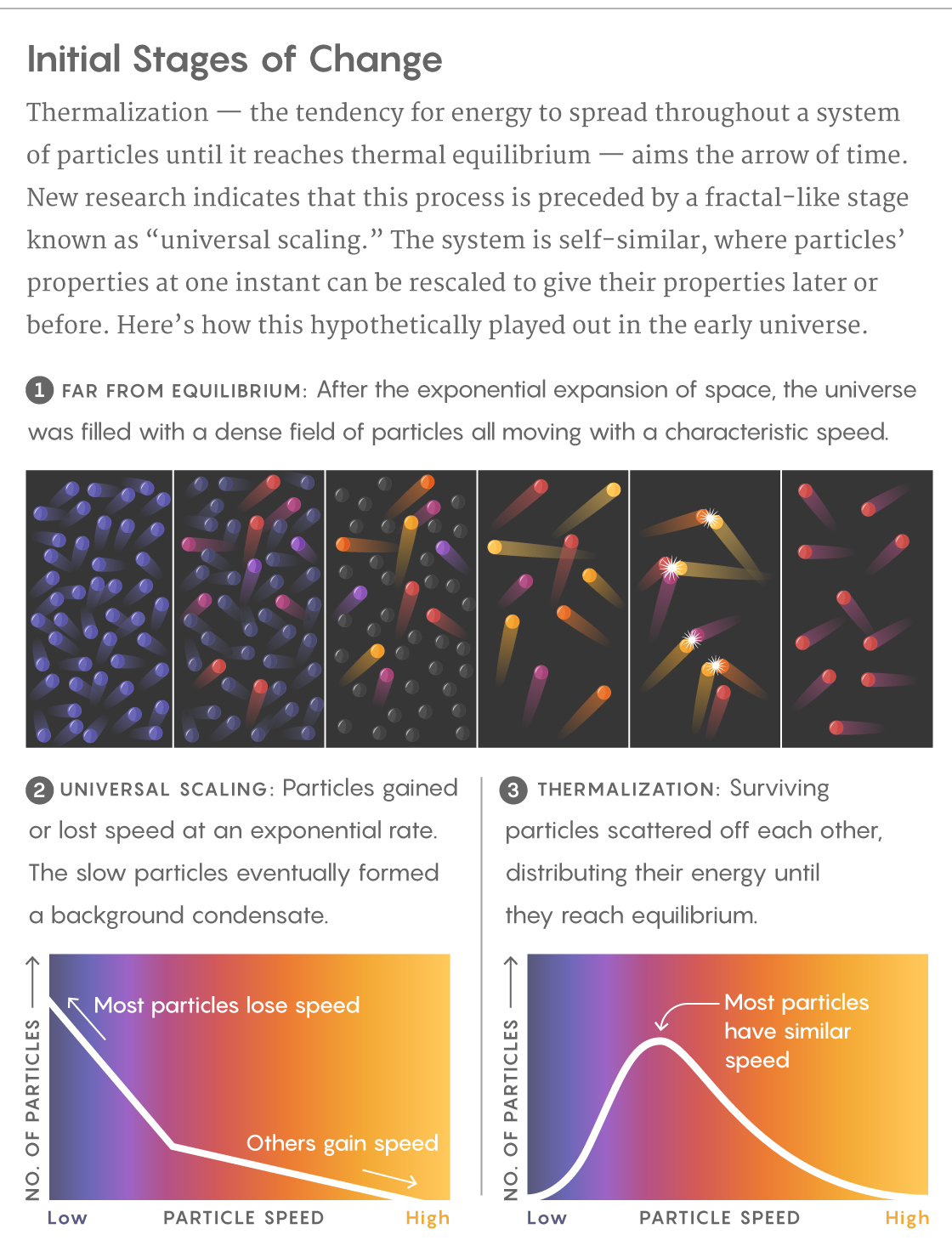 According to the team’s calculations and computer simulations, instead of a single cascade like the one you’d find in a turbulent fluid, there would have been two cascades, going in opposite directions. Most of the particles in the system would have slowed from one moment to the next, cascading to slower and slower speeds at a characteristic rate — in this case, with a scaling exponent of approximately . Eventually they would have reached a standstill, forming another condensate. (This one wouldn’t oscillate or transform into particles; instead it would gradually decay.) Meanwhile, the majority of the energy leaving the slowing particles would have cascaded to a few particles that gained speed at a rate governed by the exponent . Essentially, these particles started to move extremely fast.

The fast particles would have subsequently decayed into the quarks, electrons and other elementary particles that exist today. These particles would then have undergone standard thermalization, scattering off each other and distributing their energy. That process is still ongoing in the present-day universe and will continue for trillions of years.

The ideas about the early universe aren’t easily testable. But around 2012, the researchers realized that a far-from-equilibrium scenario also arises in experiments — namely, when heavy atomic nuclei are smashed together at nearly the speed of light in the Relativistic Heavy Ion Collider in New York and in Europe’s Large Hadron Collider.

These nuclear collisions create extreme configurations of matter and energy, which then start to relax toward equilibrium. You might think the collisions would produce a complicated mess. But when Berges and his colleagues analyzed the collisions theoretically, they found structure and simplicity. The dynamics, Berges said, “can be encoded in a few numbers.”

The pattern continued. Around 2015, after talking to experimentalists who were probing ultracold atomic gases in the lab, Berges, Gasenzer and other theorists calculated that these systems should also exhibit universal scaling after being rapidly cooled to conditions extremely far from equilibrium.

Last fall, two groups — one led by Markus Oberthaler of Heidelberg and the other by Jörg Schmiedmayer of the Vienna Center for Quantum Science and Technology — reported simultaneously in Nature that they had observed fractal-like universal scaling in the way various properties of the 100,000-or-so atoms in their gases changed over space and time. “Again, simplicity occurs,” said Berges, who was one of the first to predict the phenomenon in such systems. “You can see that the dynamics can be described by a few scaling exponents and universal scaling functions. And some of them turned out to be the same as what was predicted for particles in the early universe. That’s the universality.”

The case of the early universe may hold the most intrinsic interest, but it’s the highly controlled, isolated laboratory systems that are enabling scientists to tease out the universal rules governing the beginning stages of change. “We know everything that’s in the box,” as Hadzibabic put it. “It’s this isolation from the environment that allows you to study the phenomenon in its pure form.”

One major thrust has been to figure out where systems’ scaling exponents come from. In some cases, experts have traced the exponents to the number of spatial dimensions a system occupies, as well as its symmetries — that is, all the ways it can be transformed without changing (just as a square stays the same when rotated by 90 degrees).

Those insights are helping to address a paradox about what happens to information about the past as systems thermalize. Quantum mechanics requires that as particles evolve, information about their past is never lost. And yet, thermalization seems to contradict this: When two neglected cups of coffee are both at room temperature, how can you tell which one started out hotter?

It seems that as a system begins to evolve, key details, like its symmetries, are retained and become encoded in the scaling exponents dictating its fractal evolution, while other details, like the initial configuration of its particles or the interactions between them, become irrelevant to its behavior, scrambled among its particles.

And this scrambling process happens very early indeed. In their papers this spring, Berges, Gasenzer and their collaborators independently described prescaling for the first time, a period before universal scaling that their papers predicted for nuclear collisions and ultracold atoms, respectively. Prescaling suggests that when a system first evolves from its initial, far-from-equilibrium condition, scaling exponents don’t yet perfectly describe it. The system retains some of its previous structure — remnants of its initial configuration. But as prescaling progresses, the system assumes a more universal form in space and time, essentially obscuring irrelevant information about its own past. If this idea is borne out by future experiments, prescaling may be the nocking of time’s arrow onto the bowstring.

Natalie Wolchover is a senior writer and editor at Quanta Magazine covering the physical sciences.