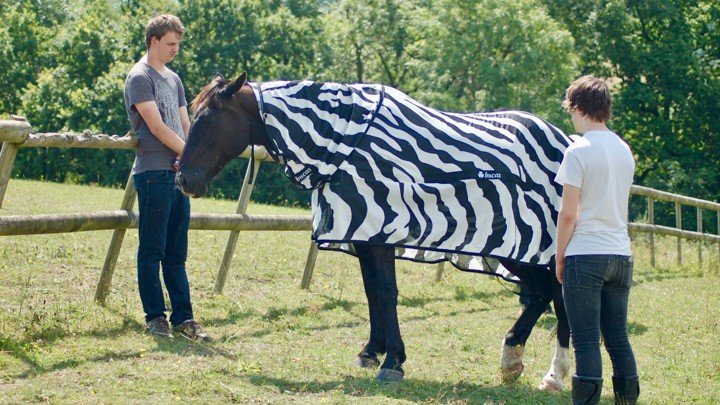 Are you sure this is a zebra? Photo from Tim Caro.

For Tim Caro, it was surprisingly easy to dress horses like zebras. Several vendors were already selling coats with black-and-white stripes, often as fun gimmicks. But, as Caro learned, such coverings have an unexpectedly serious effect. “There are enormous benefits to having a striped coat for a horse,” he told me.

Caro, a biologist at the University of California at Davis, has spent years thinking about why zebras are striped, and has even written a book about this mystery. In his latest bid to get clear answers, he and his colleagues traveled to Hill Livery, a stable in southwest England that keeps several captive zebras alongside domestic horses. By comparing these two species, as well as horses that were comically cloaked in zebra-striped coats, the team found fresh evidence for what Caro thinks is the only plausible explanation for the striking stripes: They evolved to deter bloodsucking flies.

Scientists have been puzzling over the role of zebra stripes for more than 150 years. But, one by one, the most commonly proposed explanations have all been refuted. Some researchers have suggested that the stripes act as camouflage—they break up zebras’ outlines or resemble fields of tree trunks. But that can’t be true: Amanda Melin of the University of Calgary recently showed that lions and hyenas can’t even make out the stripes unless they get very close. Another hypothesis says that the black stripes heat up faster than the white ones, setting up circulating air currents that cool the zebras. But a recent study showed that water drums cloaked in zebra pelts heat up just as much as those covered in normal horse skins.

That leaves the fly idea. When it comes to biting insects, zebras are doubly cursed. For one, they’re highly susceptible to a variety of fatal diseases, including trypanosomiasis, African horse sickness, and equine influenza, that are spread by horseflies and tsetse flies. They’re also very vulnerable to insect attacks: Compared with other grazers such as antelopes, the hairs on their coat are unusually short, allowing flies to more easily find blood vessels with their piercing mouthparts.

Stripes, for some reason, seem to help. In 2014, Caro and his colleagues showed that striped horses—three zebra species and the African wild ass with thin stripes on its legs—tend to live in regions with lots of horseflies. And several researchers, over the years, have shown that these flies find it hard to land on striped surfaces. No one, however, had watched the insects trying to bite actual zebras. That’s why Caro’s team went to Hill Livery.

By watching and filming the stable’s horses and zebras, the team confirmed that horseflies were much worse at alighting on the latter. The flies had no problem finding the zebras or approaching them, but couldn’t stick the landing. “You get a quarter as many landings,” Caro said. “The flies just can’t probe for a blood meal with the zebras.”

The team found the same trend when they put striped coats on the horses. Cloaked in stripes, the very same animals suddenly became more resistant to flies, except on their uncovered heads. And uniformly colored coats had no effect; the stripes, specifically, befuddled the flies.

“When we looked at the videos, we found that the flies simply aren’t decelerating when they come in to the stripes,” Caro said. Either they miss and overshoot the zebras, or they bump into the hides and bounce off. Something’s clearly throwing them off, but the details are still a mystery. Caro said that they might treat the black stripes like a pair of trees, try to fly between them, and end up colliding with the white stripes. Alternatively, the stripes might mess with their optic flow—their sense of objects moving across their visual field.

Paloma Gonzalez-Bellido of the University of Minnesota, who studies insect vision, favors the latter idea. These insects use optic flow to gauge their own speed and their distance from nearby objects. “I think that the key is that the stripes’ thickness and orientation is not consistent, either within a stripe or across them,” she says. “This is probably what makes it difficult for the flies to control their landing.” (She also notes that cuttlefish use their color-changing skins to create striped patterns that move across their bodies, and these “passing clouds” might also work by disrupting the optic flow of their prey.)

If Gonzalez-Bellido is right, a more evenly striped coat should offer less protection. Caro’s team is now planning to test this hypothesis, and others. “Now that we know striped coats work just as well as stripes on real zebras, we can really play around with them,” he said. “We can put on coats with very wide stripes, or different orientations, or gray stripes. We can see how those affect fly behavior.”

In the meantime, he is wary of making firm recommendations to the equine industry. “I wouldn’t want to suggest that horse-wear companies sell striped livery for their riders yet,” he said. “We need to do the work first.”

More important, I ask him, Would a striped shirt protect me from biting flies? “I’ve been very cautious about saying that until we got these results, but now I’m not so sure,” he said. “I think that a striped T-shirt might work very nicely.”