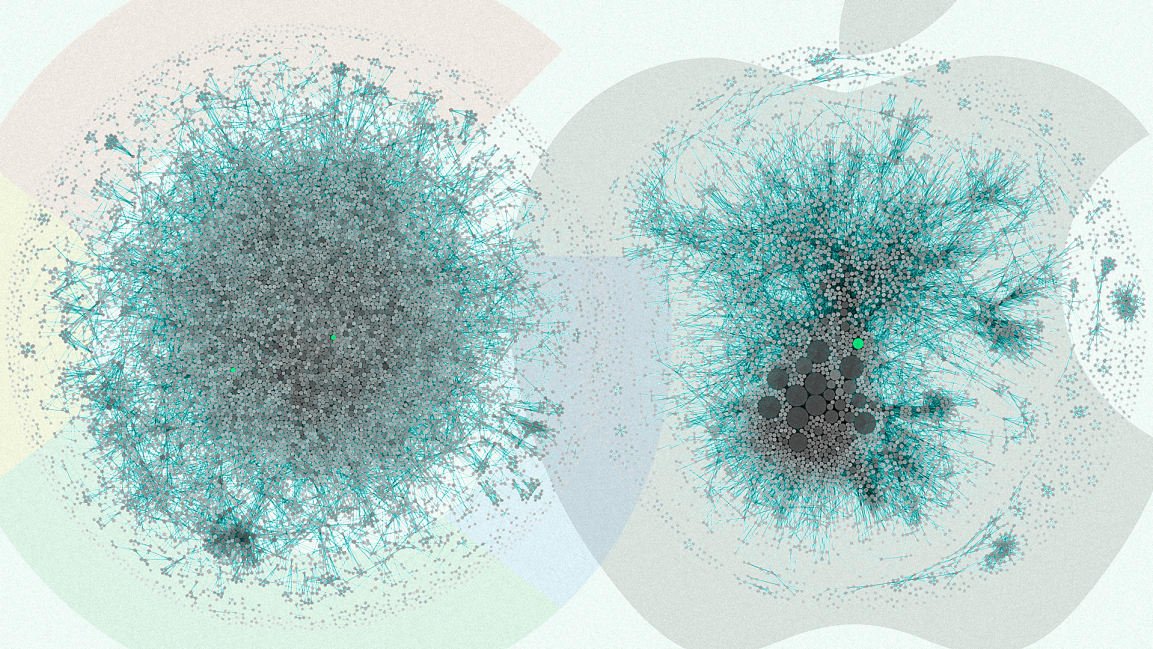 Steve Jobs has been granted 347 patents in the past decade, many awarded posthumously. By contrast, Google’s Sergey Brin and Larry Page only have a combined 27 over the same period.

It’s a telling statistic about how Apple and Google operate differently. Apple is driven largely by a centralized development structure, stemming from its fabled design studio, whereas Google has a more distributed, open-source approach to new products. And to get a real picture of how this plays out organizationally, the Portland-based data visualization studio Periscopic created a series of visualizations custom for Co.Design, which compares “innovation signatures” charting the last 10 years of patents filed at Apple and Google. 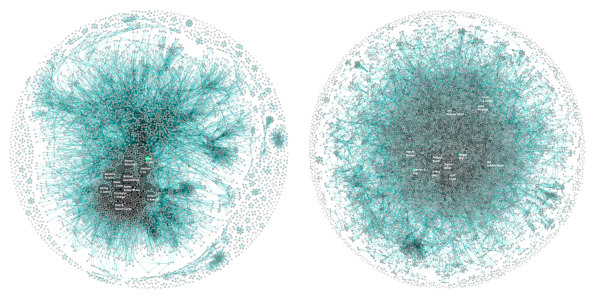 To understand what you’re looking at, know that each blob is a patent inventor, and since many patents have multiple inventors, each line is a link between an inventor and co-inventors.

From this view, Apple looks like a big ball of tinker toys, while Google is a monotonous, cellular blob more akin to the Borg. And while you can only tell so much of a company’s structure from just its patents, Periscopic believes it has spotted a clear narrative in the images.

“Over the past 10 years Apple has produced 10,975 patents with a team of 5,232 inventors, and Google has produced 12,386 with a team of 8,888,” writes Wes Bernegger, data explorer at Periscopic. Those numbers are, frankly, pretty similar in terms of proportion. “The most notable difference we see is the presence of the group of highly connected, experienced ‘super inventors’ at the core of Apple compared to the more evenly dispersed innovation structure in Google,” he continues. “This seems to indicate a top-down, more centrally controlled system in Apple vs. potentially more independence and empowerment in Google.” 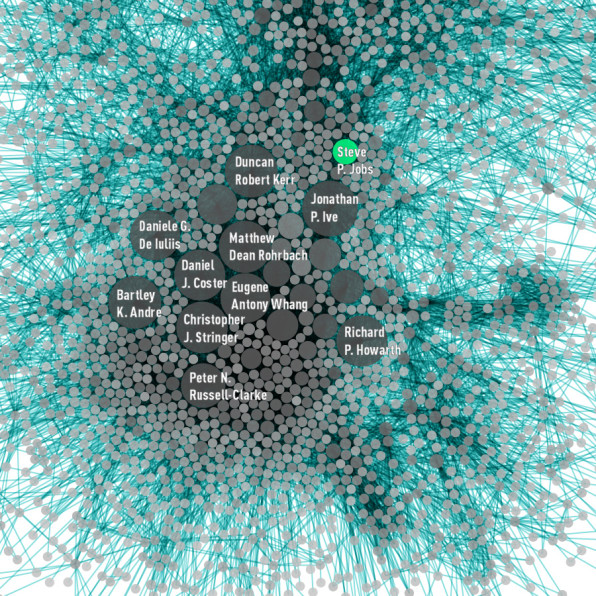 The theory makes a lot of sense. Apple’s top-secret design lab, long led by Jonathan Ive, has given birth to the company’s very few, very profitable products. And inside Apple’s innovation footprint, you’ll spot Ive, along with the names of basically every under-celebrated designer in the inner circle, including Eugene Whang, Christopher Stringer, Bart Andre, and Richard Howarth, who now leads hardware development at Apple and is largely responsible for the design of every iPhone you’ve seen. 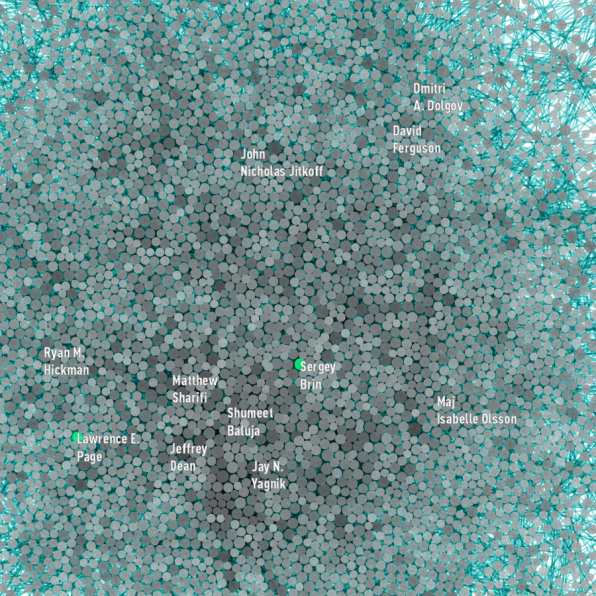 Google, on the other hand, has a relatively flat organizational structure of many small teams filled with empowered individuals. (The company even attempted to wipe out all management back in 2002, but since reinstated the idea.) All of this can be seen in their innovation signature, of course. By patents, Googlers all look pretty equal, dispersed relatively evenly.

That said, Bernegger insists there’s actually more “connectivity and collaboration” at Apple than at Google. “The average number of inventors listed on a patent at Apple is 4.2. At Google, it’s 2.8,” he explains. “These combined effects mean an inventor at Apple has, on average, produced more than twice the patents than one at Google. Nine vs. four.”

They couldn’t appear more different, but look closer at the patent structure, and you can spot a big similarity between the two companies. Namely, both Apple and Google have a membrane-like ring surrounding the entire structure. Who are these patent makers developing stuff in relative isolation? And how are they affiliated with the companies? 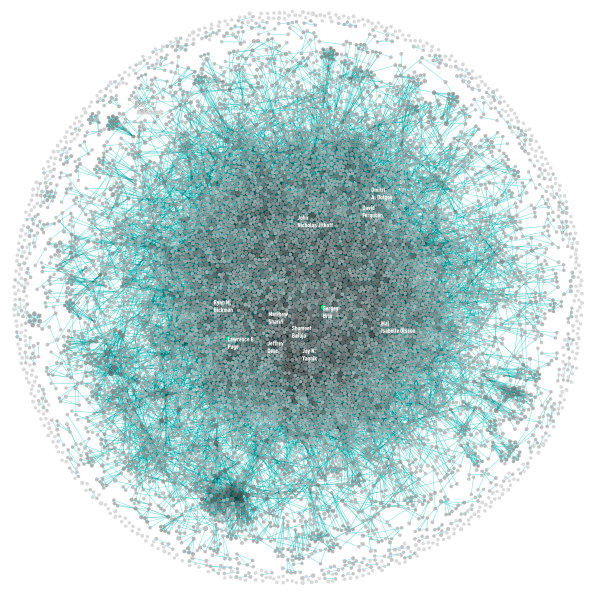 In Google’s case, we get a clue. One of the company’s largest super inventors lives out there, in the periphery, disconnected from other products. That inventor is Kia Silverbrook, who sold the company 269 granted patents on cameras and printers in 2013. Obviously patents that have been recently acquired, rather than developed in house, would lack the interconnections with other employees that centralize the largest bubbles. Furthermore, these outer rings might represent the contributions of anything from one-off inventions by a random employee, to the top secret contributions of skunkworks labs and shell companies, working outside the main team. But that would take further sleuthing to confirm. 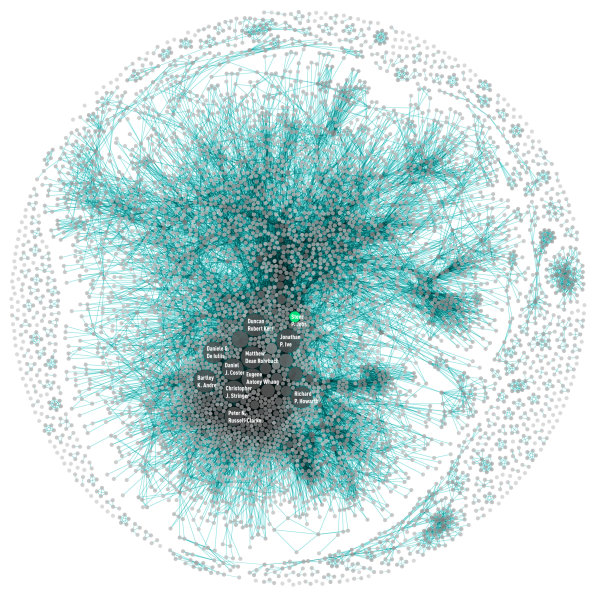 While these graphics were made specifically for this story, they stem from PatentsView, a visualizer Periscopic helped develop for the American Institutes for Research and the USPTO. It’s a publicly accessible system that transforms the patent database we’ve had for years–an early internet searchable database that pulls up some patent scans in JPEG–into a viewable network of connections. You can look at patents within companies, as seen above, or sort them by creator or topic, too.

“Our intention behind PatentsView was to create interfaces that could inspire the public to explore patent data,” says Periscopic cofounder Dino Citraro. “Part of that was to make streamlined access to patent data for people like patent lawyers who need to research it. But we wanted to embrace this open government effort and say, ‘This is public information, it’s interesting. There could be interesting patterns here.'”

Indeed, Apple and Google may only be a start. You could probably write a book on the corporate organizational structures revealed in PatentsView–information that’s been public for a century, but really only readily transparent now.

Mark Wilson is a senior writer at Fast Company who has written about design, technology, and culture for almost 15 years. His work has appeared at Gizmodo, Kotaku, PopMech, PopSci, Esquire, American Photo and Lucky Peach.