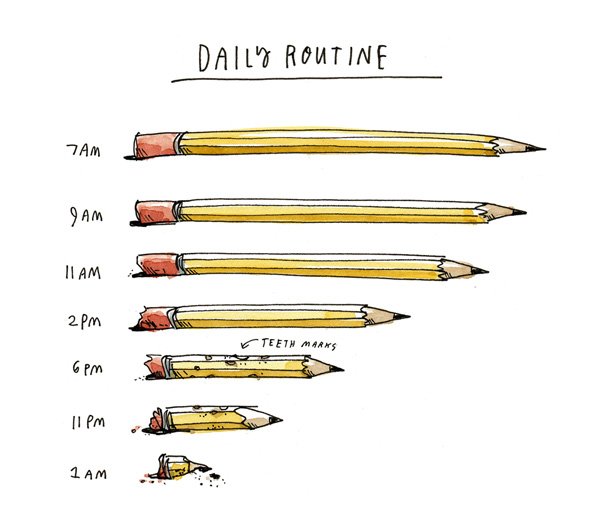 Wendy MacNaughton for Brain Pickings
Reflecting on the ritualization of creativity, Bukowski famously scoffed that “air and light and time and space have nothing to do with.” Samuel Johnson similarly contended that “a man may write at any time, if he will set himself doggedly to it.” And yet some of history’s most successful and prolific writers were women and men of religious daily routines and odd creative rituals. (Even Buk himself ended up sticking to a peculiar daily routine.)

Such strategies, it turns out, may be psychologically sound and cognitively fruitful. In the altogether illuminating 1994 volume The Psychology of Writing (public library), cognitive psychologist Ronald T. Kellogg explores how work schedules, behavioral rituals, and writing environments affect the amount of time invested in trying to write and the degree to which that time is spent in a state of boredom, anxiety, or creative flow. Kellogg writes:

[There is] evidence that environments, schedules, and rituals restructure the writing process and amplify performance… The principles of memory retrieval suggest that certain practices should amplify performance. These practices encourage a state of flow rather than one of anxiety or boredom. Like strategies, these other aspects of a writer’s method may alleviate the difficulty of attentional overload. The room, time of day, or ritual selected for working may enable or even induce intense concentration or a favorable motivational or emotional state. Moreover, in accordance with encoding specificity, each of these aspects of method may trigger retrieval of ideas, facts, plans, and other relevant knowledge associated with the place, time, or frame of mind selected by the writer for work.

Kellogg reviews a vast body of research to extract a few notable findings. Among them is the role of background noise, which seems to fall on a bell curve of fecundity: High-intensity noise that exceeds 95 decibels disrupts performance on complex tasks but improves it on simple, boring tasks — noise tends to raise arousal level, which can be useful when trying to stay alert during mindless and monotonous work, but can agitate you out of creative flow when immersed in the kind of work that requires deliberate, reflective thought. (The psychology of writing, after all, as Kellogg notes in the introduction, is a proxy for the psychology of thinking.) The correlation between skill level and task difficulty also plays a role — feeling like your skills are not up to par raises your level of anxiety, which in turn makes noise more bothersome.

These effects, of course, are relative to one’s psychological constitution — Kellogg surmises that writers more afflicted with the modern epidemic of anxiety tend to be more disconcerted by noisy environments. Proust and Carlyle appear to have been among those writers — the former wrote in a cork-lined room to eliminate obtrusive sounds and the latter in a noiseproof chamber to ensure absolute silence — whereas Allen Ginsberg was known for being able to write anywhere, from trains to planes to parks. What matters, Kellogg points out, are each writer’s highly subjective requirements for preserving the state of flow:

The lack of interruption in trains of thought may be the critical ingredient in an environment that enables creative flow. As long as a writer can tune out background noise, the decibel level per se may be unimportant. For some writers, the dripping of a faucet may be more disruptive than the bustle of a cafe in the heart of a city.

Turning an eye to research on the specific timing and duration of writing sessions, Kellogg points to several studies indicating that working for 1 to 3 hours at a time, then taking a break before resuming, is most conducive to productivity, not only for writers but also for athletes and professional musicians — a finding since repeated in more recent research. He also cites a 1985 study of circadian rhythms — something scientists have since explored with swelling rigor — which found that performance on intellectual tasks peaks during morning hours, whereas perceptual-motor tasks fare better in the afternoon and evening. Hemingway, in fact, intuited this from his own experience, telling George Plimpton in a rare 1958 interview:

When I am working on a book or a story I write every morning as soon after first light as possible. There is no one to disturb you and it is cool or cold and you come to your work and warm as you write. You read what you have written and, as you always stop when you know what is going to happen next, you go from there. You write until you come to a place where you still have your juice and know what will happen next and you stop and try to live through until morning when you hit it again. You have started at six in the morning, say, and may go on until noon or be through before that.

Location and physical environment also play a role in maintaining a sustained and productive workflow. Bob Dylan, for instance, extolled the virtues of being able to “put yourself in an environment where you can completely accept all the unconscious stuff that comes to you from your inner workings of your mind.” Reviewing the research, Kellogg echoes Faulkner’s memorable assertion that “the only environment the artist needs is whatever peace, whatever solitude, and whatever pleasure he can get at not too high a cost” and notes that writers’ dedicated workspaces tend to involve solitude and quiet, although “during the apprenticeship phase of a writer’s career, almost any environment is workable” — most likely a hybrid function of youth’s high tolerance for distraction and the necessity of sharing space earlier in life when the luxury of privacy is unaffordable.

But the key psychological function of such dedicated environments isn’t so much superstitious ritualization — an effort to summon the muse through the elaborate juju of putting everything in its right place — as cognitive cueing. Kellogg considers the usefulness of a special space used solely for writing, which cultivates an “environment that cues the desired behavior”:

This phenomenon can be reinterpreted in terms of the cognitive concept of encoding specificity. The abstract ideas, images, plans, tentative sentences, feelings, and other personal symbols that represent the knowledge needed to construct a text are associated with the place and time of the writing environment. These associations are strongest when the writer engages in few if any extraneous activities in the selected environment. Entering the environment serves as a retrieval cue for the relevant knowledge to enter the writer’s awareness. Once the writer’s attention turns to the ideas that pop into consciousness, the composing process flows again. Particular features of the environment may serve as specific prompts for retrieving, creating, and thinking.

For instance, a scene outside an office window, a painting hanging on the wall, or a plant sitting in the corner may become associated with thinking deeply about a particular text under development. Staring at the feature elicits knowledge representations bearing on the problem at hand.

This strategy is rather similar to the one most often recommended for treating insomnia — instituting a regular bedtime and using the bedroom as a space dedicated solely to sleep, in order to optimize the brain’s ability to enter rest mode upon going to bed and cue that behavior each night just by entering that environment. (Perhaps not coincidentally, many of the most successful writers are also zealous in their sleep habits.)

In fact, Kellogg cites a 1990 treatment program, developed by research psychologist Bob Boice developed for educators and other professionals who must write for a living and who were struggling with writer’s block, which uses a similar approach:

A key component of [Boice’s] program is the rearranging of the writing environment. He recommends that the writer “establish one or a few regular places in which you do all serious writing” and “nothing but serious writing; other writing (e.g., correspondence) would be carried out elsewhere.” Boice insists that magazines, novels, and other nonessential reading material be banned, social interactions minimized or eliminated, and cleaning and straightening up of the place delayed until a writing session is completed. By following these recommendations, the writer creates a space solely to think and write, avoiding extraneous activities. This space, therefore, becomes associated with all the mental products of creating meaning and can then serve as a unique retrieval cue for those products.

Note that these strategies were developed more than a decade before modern smartphones existed and long before social networks like Facebook and Twitter were moaning their constant 95-decibel siren calls for our attention. Today, Boice’s treatment program would no doubt also require the elimination of smartphones and any medium of social networking from the dedicated writing environment, among countless other “nonessential” forms of communication that the past, as is usually the case, could not have envisioned of the future.

Thomas Mann seems to have captured many of the principles Kellogg unveils in a single exquisite letter to the Austrian writer and journalist Viktor Polzer:

For writing I must have a roof over my head, and since I enjoy working by the sea better than anywhere else, I need a tent or a wicker beach chair. Much of my composition, as I have said, has been conceived on walks; I also regard movement in the open air as the best means of reviving my energy for work. For a longer book I usually have a heap of preliminary papers close at hand during the writing; scribbled notes, memory props, in part purely objective — external details, colorful odds and ends — or else psychological formulations, fragmentary inspirations, which I use in their proper place.

In the closing of the chapter, Kellogg considers what the wide variation of such routines and rituals reveals:

The diversity in environments chosen by writers, from Proust’s cork-lined room to Sarraute’s Parisian cafe, suggests the flexibility of human thought. A person can think in any environment, though some locations become habitual for certain individuals. The key is to find an environment that allows concentrated absorption in the task and maximum exposure to retrieval cues that release relevant knowledge from long-term memory.

Indeed, despite all these fruitful strategies for optimizing creative flow, the bigger truth — something I wholeheartedly believe — remains: There is no ideal rotation of the chair or perfect position of the desk clock that guarantees a Pulitzer. What counts, ultimately, is putting your backside in the chair — or, if you happen to be Ernest Hemingway or Virginia Woolf, dragging your feet to your standing desk — and clocking in the hours, psychoemotional rain or shine. Showing up day in and day out, without fail, is the surest way to achieve lasting success.

Complement The Psychology of Writing — which goes on to explore such cognitive crannies as the intricacies of symbol-creation, the role of personality in writing, and the impact of drugs and daydreams on the creative process — with Anna Deavere Smith on discipline, a guided tour of the daily rituals of famous writers, and some pointers on how to hone your creative routine.