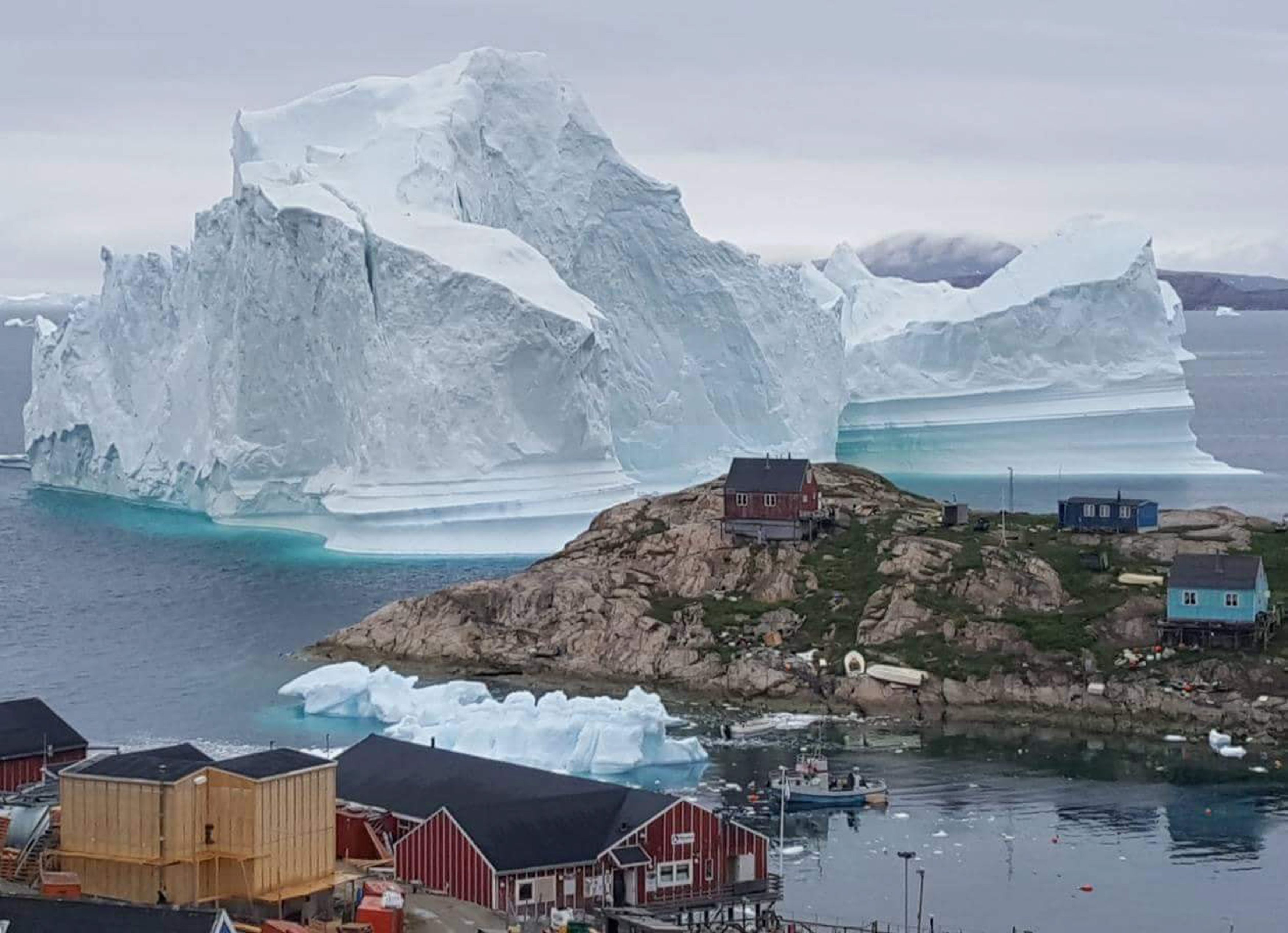 In August 2018, scientists learned that 40-foot piles of compacted sea ice — some of the oldest and most durable clusters in the Arctic — are breaking away from the coast of Greenland and drifting out to sea. One meteorologist called it “scary,” but it was hardly unexpected. As the earth’s climate heats up, the idea of a “blue Arctic” — that is, the disappearance of sea ice for at least part of the year, leaving only open ocean — has long been predicted by climate scientists. Some researchers believe that you might be able to kayak to the North Pole as early as 2030; others think the sea ice might last until 2040 or longer.

The thawing of the Arctic is one of the biggest stories of our time, even if it is playing out at a pace and in a way that virtually guarantees most people will pay little or no attention to it. What’s going on is not a future concern, or simply a tragedy for polar bears; the warming Arctic is already having a tremendous impact on our world and may help explain much of the recent extreme weather, especially in the U.S. and in western Europe. To oversimplify this only slightly, you could argue that 2018’s historic wildfires in California were predicted by heat in the Arctic.

In recent years, the Arctic has been heating up faster than any other place on the planet. (In February 2018, temperatures in the Arctic were 45 degrees Fahrenheit above normal). That same year, German climate scientist Stefan Rahmstorf wrote an excellent piece in Politico explaining why the warming Arctic is not only causing ice to melt, but changing the weather dynamics for the entire planet. “That global warming leads to more heat extremes is not rocket science and has been confirmed by global data analysis,” Rahmstorf wrote. He pointed out that we are seeing five times more monthly heat records — such as “hottest July on record in California” — than we would in a stable climate. More heat means drier soils, causing more drought and wildfires. It also means more extreme rain, given that a warmer atmosphere can suck up and then release more moisture (a global increase in rainfall records is well-documented in weather station data).

But then Rahmstorf made a crucial point: “It’s not just that the weather is doing what it always does, except at a higher temperature level. Rather, there is growing evidence that the dynamics of weather itself are changing.”

The basic idea, Rahmstorf argued, is that the jet stream — a band of high winds around the Northern Hemisphere that significantly influences our weather in the mid-latitudes — is changing. Researchers showed in 2015 that the jet stream has actually slowed down significantly in recent decades and undulates more. The cause is likely to be the warming of the Arctic, as the stream is driven by the temperature contrast between the tropics and the Arctic. Because this temperature difference is getting smaller and smaller, the jet stream is weakening and becoming less stable. “The weaker summer circulation means fewer weather changes, so the weather is becoming more persistent,” Rahmstorf wrote.

It’s not only summer weather that is changing. In 2018, one study showed that when the Arctic is unusually warm, extreme winter weather is two-to-four times more likely in the eastern U.S. As Rahmstorf noted, “Climate change does not just mean that everything is gradually getting warmer. A certain wave pattern in the jet stream, meandering from north to south, settles for a long time and brings heat and drought or continuous rain, depending on where you are in this pattern. Such a persistent jet stream pattern has played an important role in the weather extremes of recent weeks, connecting the extremes around the Northern Hemisphere.”

More extreme weather is not the only immediate and alarming consequence of a melting Arctic. Another is the thawing of permafrost, the vast realm of permanently (until now) frozen ground that lies beneath the snow and ice in the Arctic. Trapped in this frozen soil and vegetation is more than twice the carbon found in the atmosphere. As the permafrost thaws, microbes come to life and start eating the buried organic matter, which in turn releases CO2 and methane, a greenhouse gas that is 25 times as potent as CO2 (although shorter-lived). A 2014 study estimated that thawing permafrost could release around 120 gigatons of carbon into the atmosphere by 2100, which would contribute another .3 degrees Celsius of warming. And that may be a conservative estimate.

National Geographic ran compelling story about a Russian scientist who is seeing permafrost melt in northern Siberia at a much faster rate than anyone anticipated — the landscape is warping and the ground is literally cratering as the soil thaws. And a new study by Katy Walter Anthony, a biochemist at the University of Alaska, has discovered that methane is bubbling out of thermokarst lakes (meltwater lakes on the permafrost) at a rate that is double the previous estimates.

As the permafrost thaws, who knows what else will be revealed? All kinds of long-frozen artifacts have been emerging from the ground recently, from well-preserved humans to a 30,000 year old baby horse. One real but still-unquantifiable risk: long-frozen bacteria and viruses like anthrax and smallpox could emerge, triggering an epidemic that plays out like a climate change-driven remake of The Andromeda Strain.

Plenty of people see the melting Arctic as a boon, of course. In the next few days, the first container ship will sail through a new shipping route in the Arctic, potentially shortening travel times from Asia to Europe. In Greenland, new mining operations (mostly for rare metals) are poised to open as the ice sheets retreat. For the Russians, the Arctic is a new military frontier, a place for Vladimir Putin to show northern Europeans who’s boss. And of course nobody is doing more than President Trump to ensure a blue Arctic in the very near future. The Trump administration has successfully pushed Congress to open the Arctic National Wildlife Refuge for drilling, and proposed both rolling back vehicle emissions standards and rewriting the Clean Power Plan to loosen limits on carbon pollution from power plants. If there is any clearer way of saying I could give a shit about the Arctic (or any other fragile eco-system), I can’t think of it.

Can the Arctic be saved? In theory, various geoengineering strategies might eventually be deployed to slow the melt, but for 10,000 different reasons (which you can read about here) that’s a dangerous idea. A far better solution would be an all-out assault on carbon emissions — a goal which, urgent as it may be, the world has made zero progress toward in the last three decades.

“Save the Arctic!”, however, is not a rallying cry that’s going to motivate many Americans. The Arctic is too distant, too far away, too alien. But that doesn’t mean it doesn’t matter. Think of the Arctic as our early warning system, a big screaming alarm that is alerting us to the fact that the planet we will live on tomorrow is nothing like the planet we lived on yesterday, and we better get ready. As the Arctic heats up, it raises sea levels in Miami and Bangladesh and every other coastal city in the world, and it increases the odds of wildfires in California and the west. In a sense, the massive changes that are taking place in the Arctic are remaking the weather in America and northern Europe, with profound implications for everyone who lives there, whether they know it or not. And they are a reminder of one of the great truths about climate change, and one that is hardest to grasp: In our rapidly changing world, no place is too distant or too far away to matter. Like it or not, we are all in this together. When ice melts in the Arctic, the west burns.