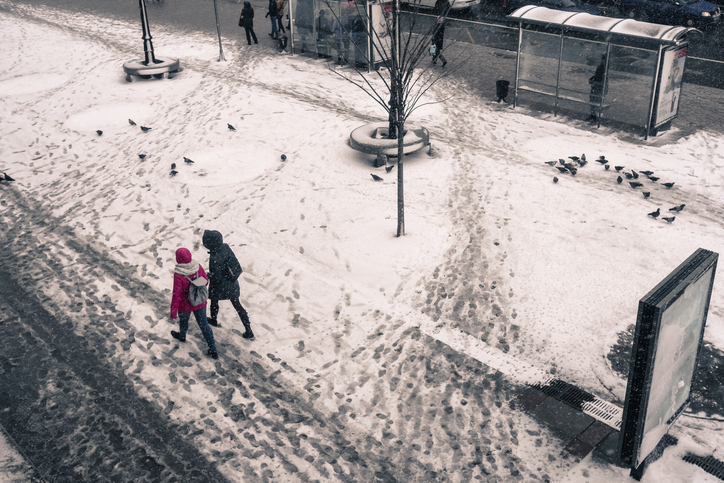 A daily walk, even in the winter, is the perfect time to sharpen the mind and encourage creativity. Photo by Maarten Merkelbach/EyeEm/Getty Images

The weather is rubbish, there is nowhere to go and, bereft of the joys of spring, the daily walk can feel pointless. But, of course, it is not: the mental and physical health perks of exercise are immune to seasonal changes. We need to gallivant around outside in daylight so that our circadian rhythms can regulate sleep and alertness. (Yes, even when the sky is resolutely leaden, it is still technically daylight.) Walking warms you up, too; when you get back indoors, it will feel positively tropical.

But if meeting these basic needs isn’t enough to enthuse you, there are myriad ways to add purpose to your stride and draw your attention to the underappreciated joys of winter walking.

Even Alex Strauss, the author of The Mindful Walker, has to tackle her resistance to get out on wild winter days. Sometimes, she says, “it takes a few mind games to get motivated. When it’s cold, when it’s grey, instead of saying you’re going to go out and do a 40-minute walk, allow yourself to say: ‘I’m going to do five minutes.’ Your brain is much less likely to resist that. Then, once you’re out there, it often turns into a longer walk.”

“It’s a big misconception that not a lot goes on in winter,” says the Springwatch presenter Megan McCubbin. Plus, it is easier to spot birds in leafless trees. “There are some amazing winter spectacles to see, if it’s safe to do so within regulations. One of my favourites is the starling murmurations. The birds come together in their hundreds, if not thousands, in particular areas across the UK – for safety in numbers, as they’re going in to roost. They perform the most amazing synchronised movements in the sky.”

If you can get to open fields at dusk, you might spot “the beautiful white silhouettes of barn owls hunting along the hedgerows and across fields”, she says. “While our summer and spring visitors might have left on their migration, we’ve got a lot of winter visitors.” Waxwings come to the UK for some relief from freezing Russia and their fluffy crests and waxy red wing markings make them “one of the most attractive visitors we get. We often see them around car parks and in urban trees.”

The Echoes interactive “sound walks” app contains audio made by artists, musicians, authors and historians around the world, with content triggered by GPS or Apple iBeacons along the route. The musical soundtrack for a Gloucestershire country walk – or a murder mystery in Coventry, or the stories of the forgotten bodies in Bath’s 19th-century workhouse burial ground – unfolds as you go.

Being mindful, says Strauss, “just means to be present, focused and aware of your internal and external landscapes in any given moment. When we bring mindfulness into the equation, we take everything up a notch in terms of benefits. We know that mindfulness can slow our heart rate and reduce anxiety and depression.” When we are mindful during exercise, our workout is more effective. One of the easiest ways to “drop into mindfulness” while walking, she says, is to listen to your footsteps. “I like to do a little activity where I breathe in for four steps, hold my breath for about four steps – whatever feels comfortable – and then exhale for four steps,” she says. This takes a little concentration, but it allows you to release the extraneous thoughts in your head and live in the present.

Give Yourself a Mission

Winter is a surprisingly good time of year to practise mindfulness outside, says Strauss: “The fact that the natural world is partly dormant can prompt us to turn our attention inward more. Things tend to come into sharper focus in the outdoors.” It is the perfect season, therefore, to try a “mindful mission”. Once you are “quiet inside” from the breathing exercise outlined earlier, “notice five things in nature you can see, four things you can hear, three things you can feel, two things you can smell and one thing you can taste, although I don’t recommend licking trees or anything. It’s just a way to bring all of your senses into sharp focus.”

Foxes are very active in the winter, says McCubbin, “trying to get as much food as possible … males will be finding females ahead of the breeding season, starting in February. So if you know where your local foxes are, it’s a great thing to be able to observe them from a distance and get to know them.” It is a similar situation with badgers. “It’s another common misconception that they hibernate,” she says.

“Because it’s frosty and frozen, and slightly damp and muddy in areas, there’s a lot more evidence on the ground of what’s been around,” says McCubbin. “Look in the mud, because often footprints will be frozen in it. It’s a really great time of year to learn animal tracks and footprints and discover what species are around.” Children love this activity, she says; inviting them to investigate animal tracks is often much more successful than saying: “Right, who wants to come on a walk?”

Get a Magnifying Hand Lens

When nature isn’t wearing its spring regalia, stopping to zoom in on rock-dwelling lichen, or to reveal the rich ecosystem beneath a rotting log, can be fascinating. On recent rainy days, Lucy Jones, the author of Losing Eden: Why Our Minds Need the Wild, has been searching for moss. It thrives in the winter, when there is less tree shade. “Rain plumps the moss up and it makes it bright emerald,” she says. “There are lots of different shapes and types you can look at. If you have a hand lens, that will deepen your engagement and what you can see. I live on a busy urban street and there are all sorts of different types on the walls and in the cemetery. It’s everywhere.” Who needs a rainforest when you can get a bug’s eye view of a moss jungle?

Clue Up On Vegetation

If you happen upon some fantastical turquoise goblet-shaped fungi, why leave it at that? You could look it up and go home with the satisfaction of knowing that you have encountered some green elf cup mushrooms. Take wildflower or mushroom identification books out with you, or download a tree guide from the Woodland Trust. Jones swears by the app PictureThis for instant plant identification. “I did it with some catkins the other day and learned that they were hazel catkins and pussy willow, so called because they look like cats’ paws.” Having an identification focus on a walk is often a hit with children, too, she says: “You can give 100 points for bracket fungi, which grow like fairy ladders up trees, 200 points for a squirrel, that kind of thing.”

Another app Jones recommends is GoJauntly, which helps people all over the UK find green and pleasant circular walks nearby, such as park to park through the Curry Mile in Manchester, or the Hamble Rail Trail in Southampton. If you have an idea of where you would like to explore, but not the best route, Footpath lets you trace it roughly with your finger and then shows you the best paths and roads to take, adding information on distances and climbs.

Logging your achievements is a proven motivator, until you know by heart which local jaunts earn you 10,000 steps – then it gets boring. Boost your data dopamine hits with the app MapMyWalk, which uses your phone’s GPS to capture your route. It also provides stats on distance, elevation, speed, pace and calorie expenditure. You can save and share your favourite walks and try those posted by others in your area.

Recreate Trails in Your Garden

Take a longer view on the distances you walk by measuring your cumulative progress against grand routes of the world using the World Walking app. The goals are endless – crossing the Sahara, walking Route 66 – and one early adopting walking group has already reached the moon.

Treasure Trails sells downloadable walking routes with clues and landmarks to spot as part of interactive adventure stories, or to bring local history to life in British towns and cities. Routes range from a self-guided adventure in Manchester called The Wizard’s Spellbook, which promises “fantastical tales”, to a historical “treasure map” of Herne Bay in Kent.

Shane O’Mara, a neuroscientist and the author of In Praise of Walking, once wowed me with the many ways in which walking sharpens the mind and encourages creativity – bringing on theta brainwaves and the production of brain-nourishing chemicals among them. This is why a daily walk is the perfect time to mentally plan your essay, rehearse your lines, carry out thought experiments, solve an advanced maths problem or daydream.

Look Up and Travel Back in Time

Ben Olins, the co-founder of the unapologetically analogue cultural guide and map company Herb Lester, looks up as much as is safely possible when he is walking. “You get a better idea of what it used to be like, when you don’t see cars and modern door furniture,” he says. Even in less exciting areas, “you might spot an old sign, or different street furniture. I like looking at where pubs used to be and getting a sense of just how many there used to be, what areas were like when they were first developed”. The more looking up you do, the more of an area’s story will fall into place. In north London, Olins says, “it’s all piano factories and breweries: businesses that involved great weight, because of the canals. You start to make sense of the area, a little like with language – discovering the Latin origin of a word, then all these other words suddenly start to make sense.”

Walk Your Routes in Reverse

“I don’t understand people who walk the same route over and over,” says Olins – unless, of course, you are rushing to the station. The beauty of lockdown walks with no destination is that there is no need to repeat routes. But even if you are wedded to your favourites, says Olins, doing them backwards will throw up new aspects and discoveries. “There’s always a different way to do it,” he says. “You’ll see it very differently.”

In the lockdown of April 2019, in the run-up to his 100th birthday, Captain Tom Moore raised millions for the NHS by walking laps of his garden. You could try something similar for your chosen charity, using justgiving.com or virginmoneygiving.com/giving, or directly with a charity such as Macmillan Cancer Support, with whom you can register a walking challenge to suit you.

The give and take of human connection is often as good as medicine, so while we may not be able to meet our friends face to face, we can call them up to walk and talk. It is hard to feel like there is much to say when you are cooped up in the same four walls day in, day out, but while you are strolling along, stimulated by your senses and momentum, you might find there is suddenly plenty to talk about.

Get a Physical Map

Get Lost on Purpose

Olins, whose guides include Clandestine London and An Edinburgh Companion, is drawn to overlooked routes. “Even if they don’t seem as if they might have that much potential, you never know,” he says. “There are so many hidden streets and enclaves. They may have no great architectural or historical significance, but they might show a community that’s obviously neighbourly and they’ve all put plant pots outside.” We all like to nose at other lives going on around us, says Olins. “It’s comforting, isn’t it?”