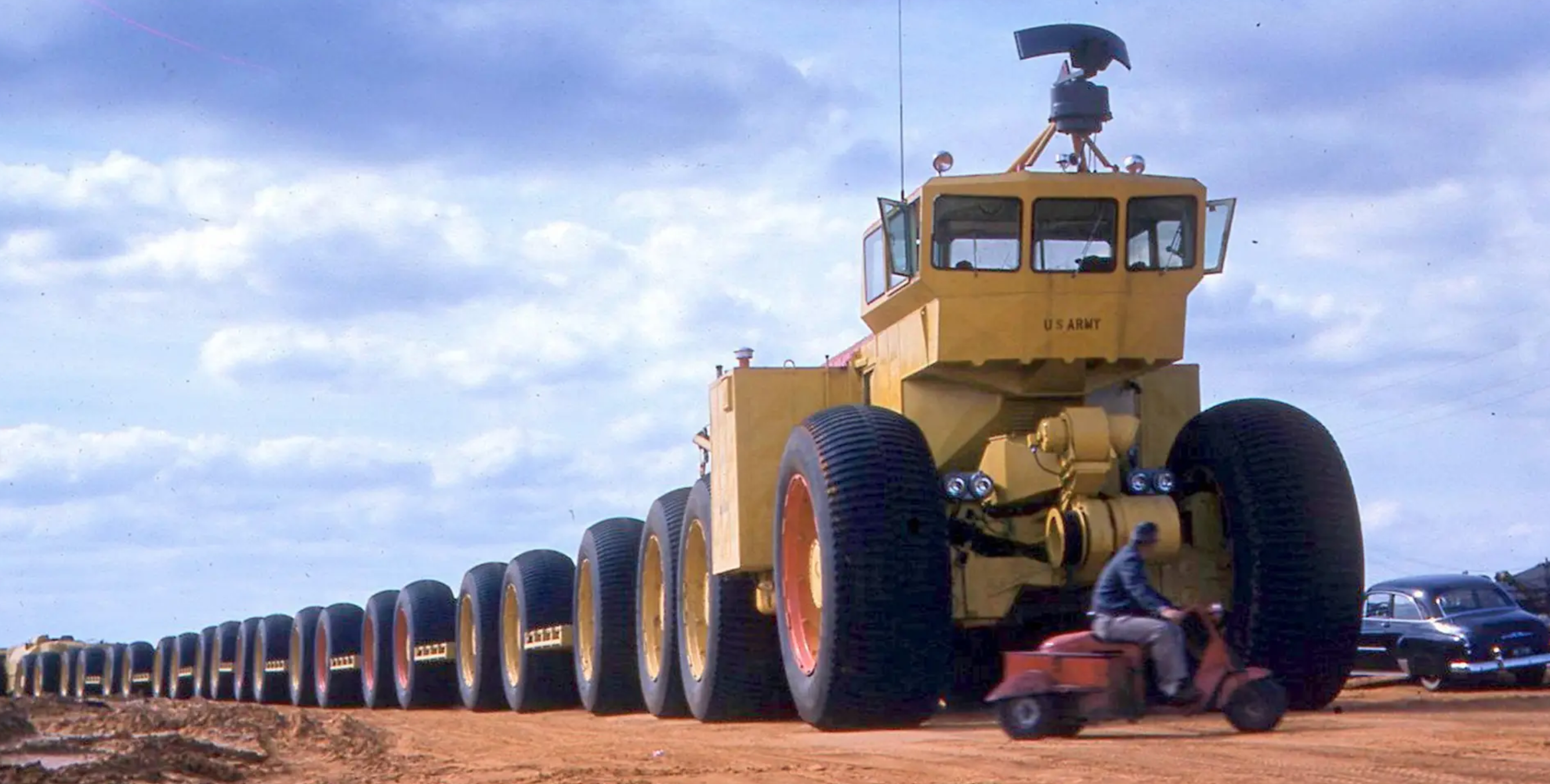 You need to get 500 tons of supplies from Fairbanks, Alaska to the Arctic Ocean—a journey of about 400 miles through pure wilderness. There are no roads, very few airstrips, and endless ice. You're going to have to withstand minus 68 degree temperatures. Also, nuclear armageddon is on the menu if you're not quick about it.

You, my friend, need a LeTourneau land train.

By 1954, with the Cold War well underway, the U.S. government realized the quickest way to get a nuclear bomber from Russia to America was to go right over the Arctic Circle. If we wanted any chance of preventing a nuclear apocalypse, we needed to know if Soviet bombers were crossing the North Pole as soon as possible. The Army planned to build 63 manned radar stations in the high Arctic around the 69th parallel (200 miles north of the Arctic circle) as a result. And to transport all the necessary material that far north, it would have to get creative. 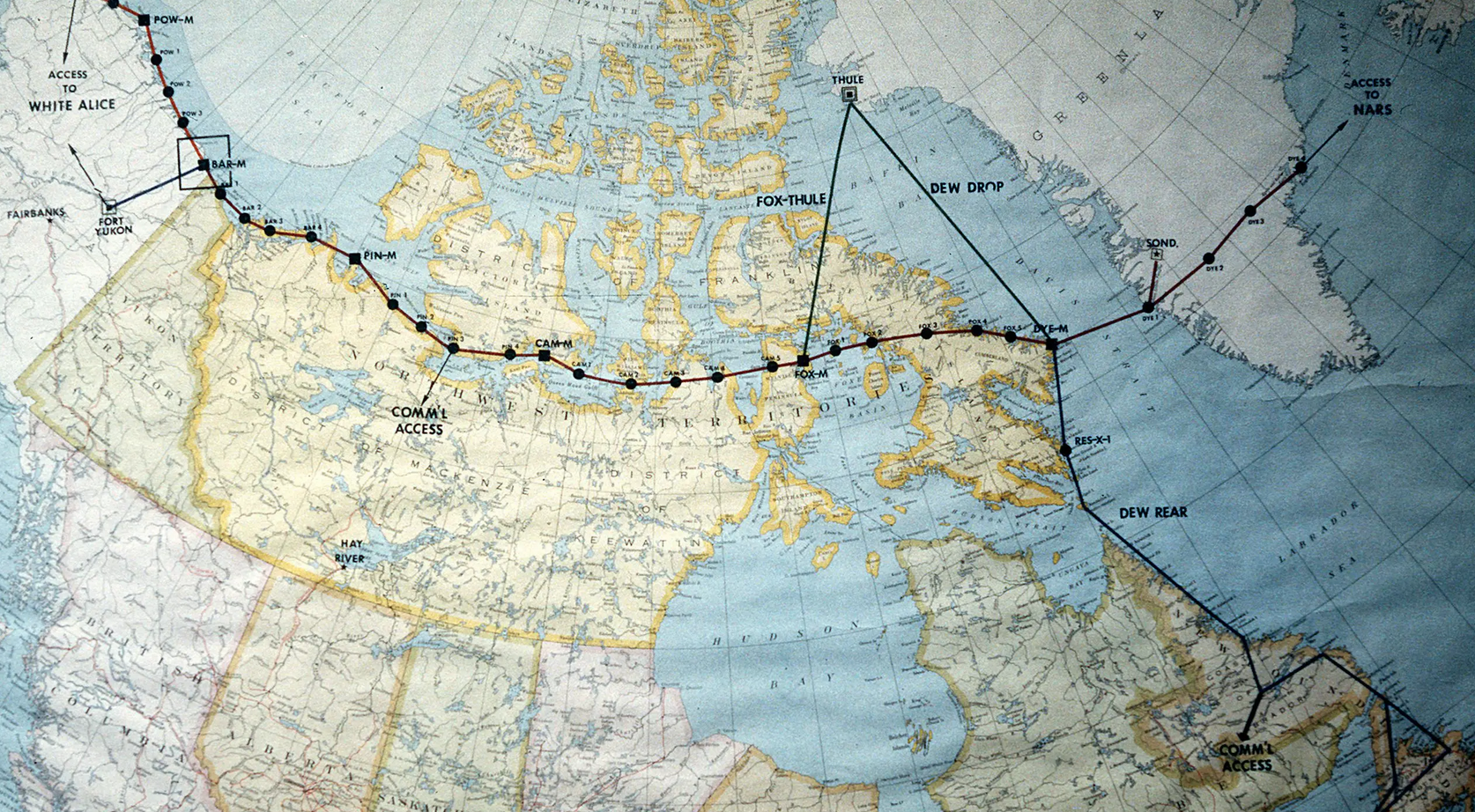 Working together, Canadian and American governments determined they would need about 500 tons of materials to construct all of these outposts. With no suitable runways or ports and heavy lift helicopters still in their infancy, it would all have to be hauled in over land. The task of figuring out how exactly to get that done fell to the same company that had been chosen to build the stations themselves—The Western Electric Company, a subsidiary of AT&T.

Solving unsolvable logistics issues wasn't exactly its forte. But with the help of TRADCOM (U.S. Army Transportation Research and Development Command), it found the one company—more accurately, the one man—that might be able to help.

That's R. G. LeTourneau To You

Born in 1888, Robert Gilmore LeTourneau was an inventor of heavy machinery. In WWII, 70 percent of the Allies' earthmoving equipment was created by LeTourneau Technologies, Inc. Having very little formal education, LeTourneau began his working career as an ironmonger. By the time he died in 1969 he was tremendously wealthy and personally held nearly 300 patents. He is buried on the campus of the University he founded in his name, where his gravestone reads "MOVER OF MEN AND MOUNTAINS." Just a little character development for you. 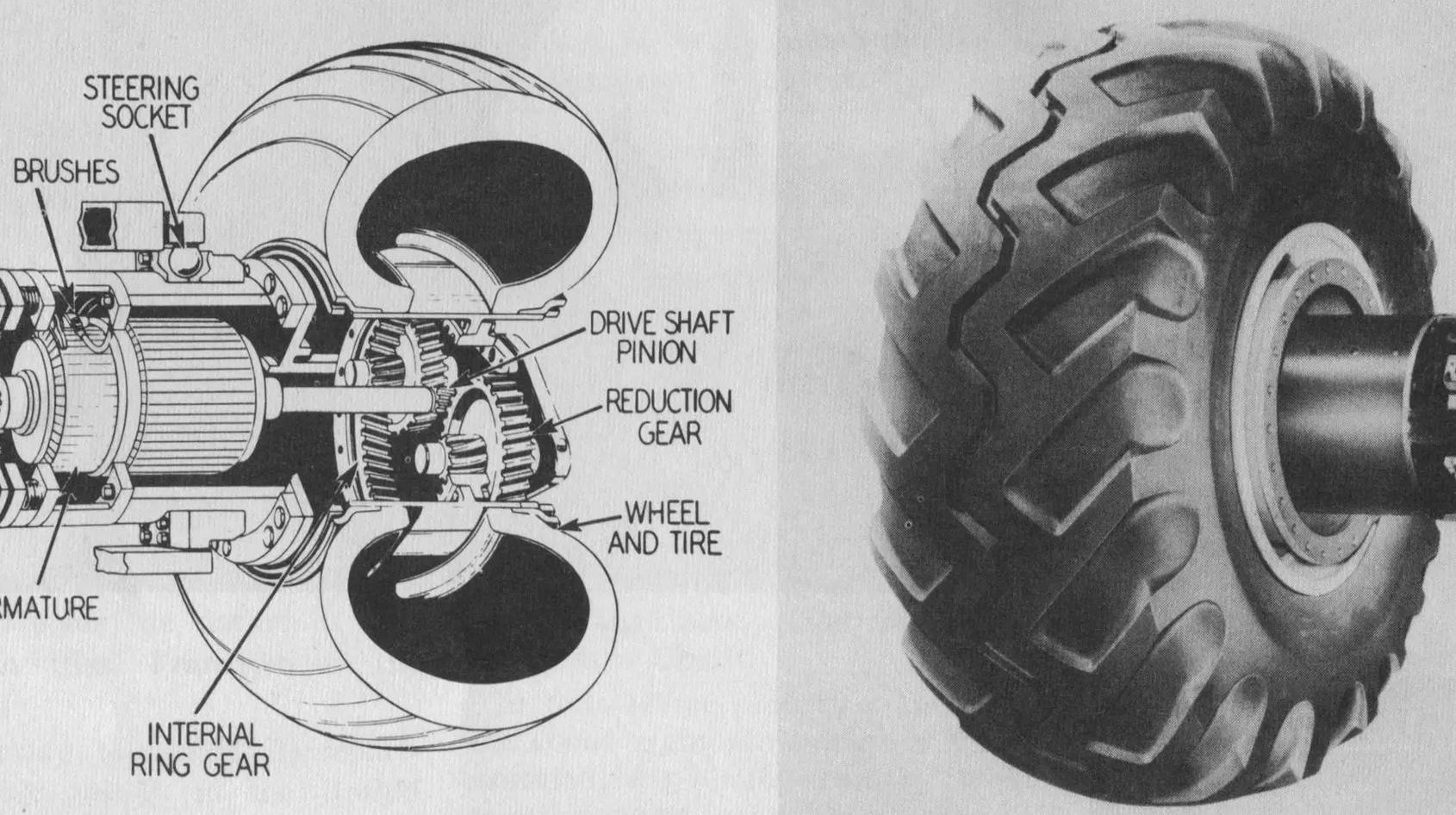 LeTourneau had spent the early 1950s perfecting a sort of diesel-electric drivetrain for multi-wheeled heavy-machinery. The system—somewhat similar in concept to the sort used on many locomotives—used a combustion engine to spin an electric generator. This generator would send its power to hub motors mounted to each wheel of the vehicle, allowing for multi-wheel-drive without differentials, driveshafts, or the drivetrain losses associated with them.

This powertrain setup will sound familiar to anyone who read our story on the doomed Antarctic Snow Cruiser in 2020. But LeTourneau's design was clearly a generation ahead of Thomas Poulter's hub motors, which weren't geared properly to handle anything beyond a gentle incline.

LeTourneau originally applied this technology to scrapers and graders, but realizing the scalability of such a system, he soon moved beyond just earthmoving. In 1953, he dreamed up the first trackless land train to assist logging operations, the VC-12—a four-wheeled control cab with a 500-horsepower Cummins diesel connected to a generator, pulling three cargo trailers on giant, rugged tires, all of which were powered by hub motors to make it a true 16-wheel-drive vehicle. It was brutally ugly, but critically, it worked.

Developed to haul lumber out of forests over rough terrain, the VC-12 had a hauling capacity of 140 tons. A second version saw LeTourneau add three more cargo trailers and another control cab out back with a second Cummins diesel, much like a real train would be set up with multiple locomotives. TRADCOM caught wind of the project and asked for a demonstration.

TRADCOM came away impressed. This would be the vehicle to help engineers build up the DEW Line, or at least a version of it. The government decided to pay for the construction of a prototype control cabin built by LeTourneau and designed specifically for Arctic conditions. The result? The TC-264 Sno-Buggy—and, incidentally, monster trucks.

Entering the Arctic With a Giant Machine

The Sno-Buggy had a single, 28-liter Allison V-1710 V12, the same engine used in many American fighter aircraft during WWII including Lockheed's P-38 Lightning. In this application, it ran on butane and powered a generator, which in turn sent the juice to four hub motors, each spinning two massive 10-foot-diameter wheels. There was no suspension system; any cushioning was provided by the low-pressure tires instead. 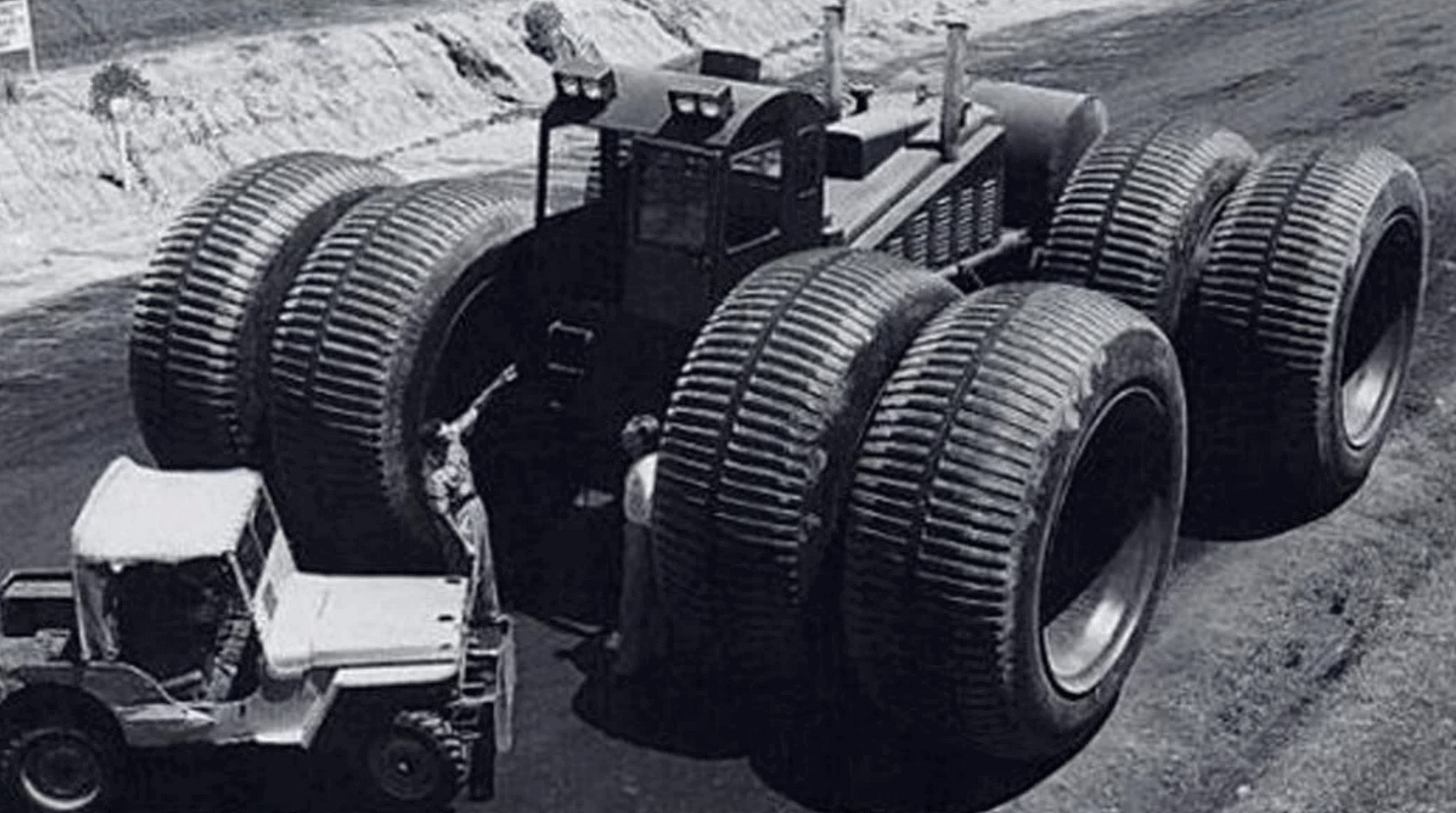 Speaking of those huge wheels, four of them eventually made their way to the iconic Bigfoot monster truck (Bigfoot IV and V, to be exact) in the 1980s after owner Bob Chandler bought them from a Seattle-area junkyard for $1,000.

The Sno-buggy had an exceptionally large contact area on the ground, which allowed it to spread its weight over the soft snow and ice. As a result it excelled when tested in Greenland in 1954, and both the U.S. Army and Alaska Freightlines (the Seattle-based company Western Electric contracted to transport their freight north) were impressed enough to order a pair of overland trains. Alaska Freightlines' rig was the first to be completed, dubbed the VC-22 Sno-Freighter.

The VC-22 was quickly assembled in a little more than a month. This is impressive considering it was one of the longest (if not the longest) off-road vehicle ever built at the time, with its six cars (including the locomotive) measuring a total of 274 feet. Each car had four driven wheels, resulting in 24-wheel-drive courtesy of two 400 horsepower Cummins diesel engines and the now-familiar hub motor setup. It had a payload capacity of 150 tons.

Thanks to its 7.3-foot-tall wheels and tires, it could traverse nearly any terrain. It had a very successful first season hauling freight to the DEW Line, but a year later it jackknifed and a fire started in the engine room that rendered it inoperable. Soon after, Alaska Freightlines' contract with Western Electric ended and the VC-22 was hauled out of Canada and left on the side of a highway in central Alaska, where it remains to this day.

Seriously, it's visible in both Google Maps satellite images and the Street View perspective from Steese Highway outside Fox, Alaska. See for yourself. 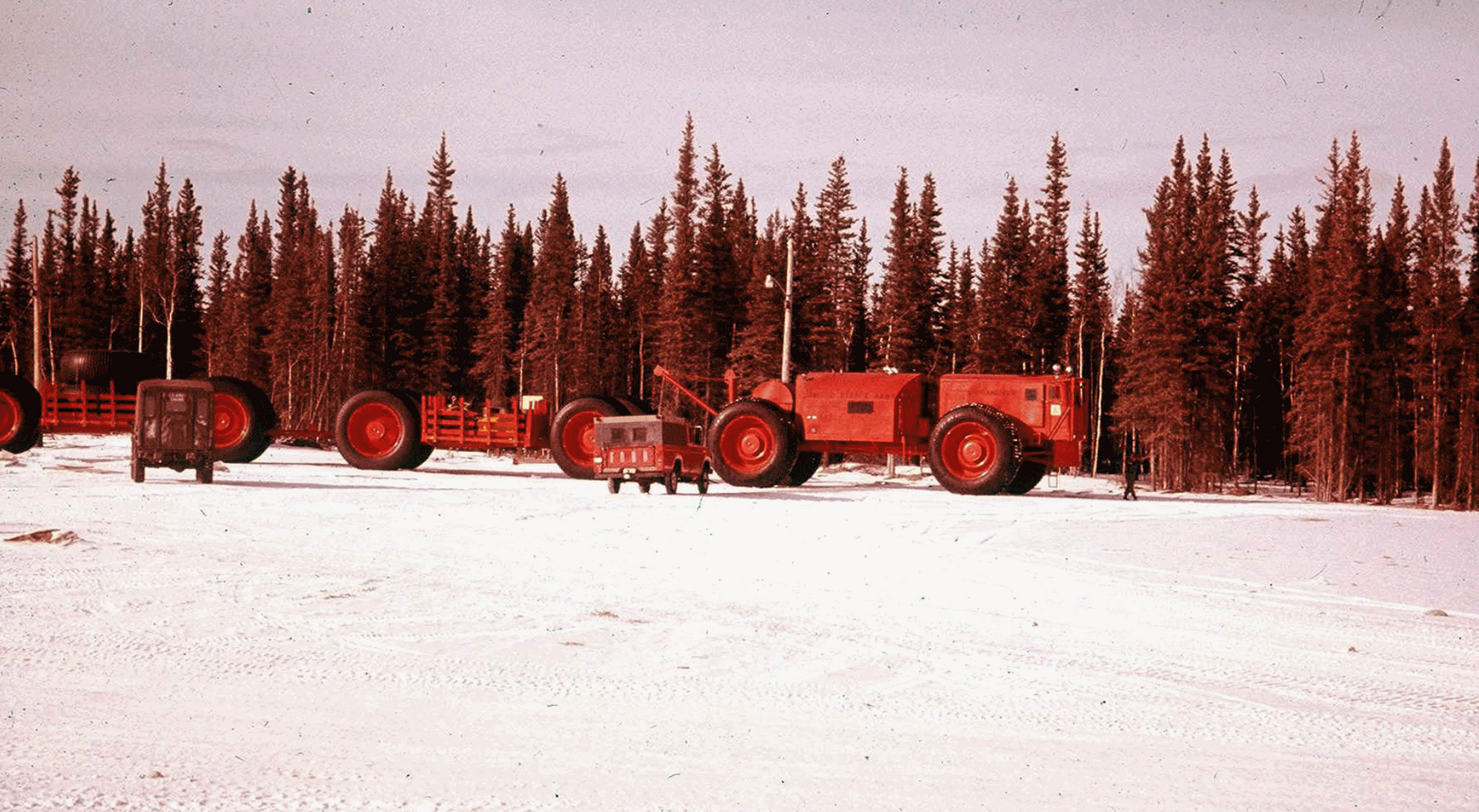 Sometime after the VC-22 was completed, the Army's more complex machine was also finished. Donning the same 10-foot wheels as the Sno-Buggy that impressed officials, the so-called LCC-1 had four cars including an articulating locomotive at the front. Its 600-hp diesel engine sent power to all sixteen wheels, and it was capable of hauling 45 tons.

This machine led a much longer and more successful life than the VC-22. Dispatched to Greenland, it hauled cargo all over the region from 1956-1962. But it too was eventually abandoned in an Alaska salvage yard before being rescued and put on display at the Yukon Transportation Museum in Whitehorse, Canada, where it's also visible from space on Google Maps.

It might not sound like it, but the Army was very impressed with the LCC-1's capabilities. So in 1958, officials commissioned the construction of its successor, the longest off-road vehicle ever and LeTourneau's final triumph: the TC-497 Overland Train Mark II. 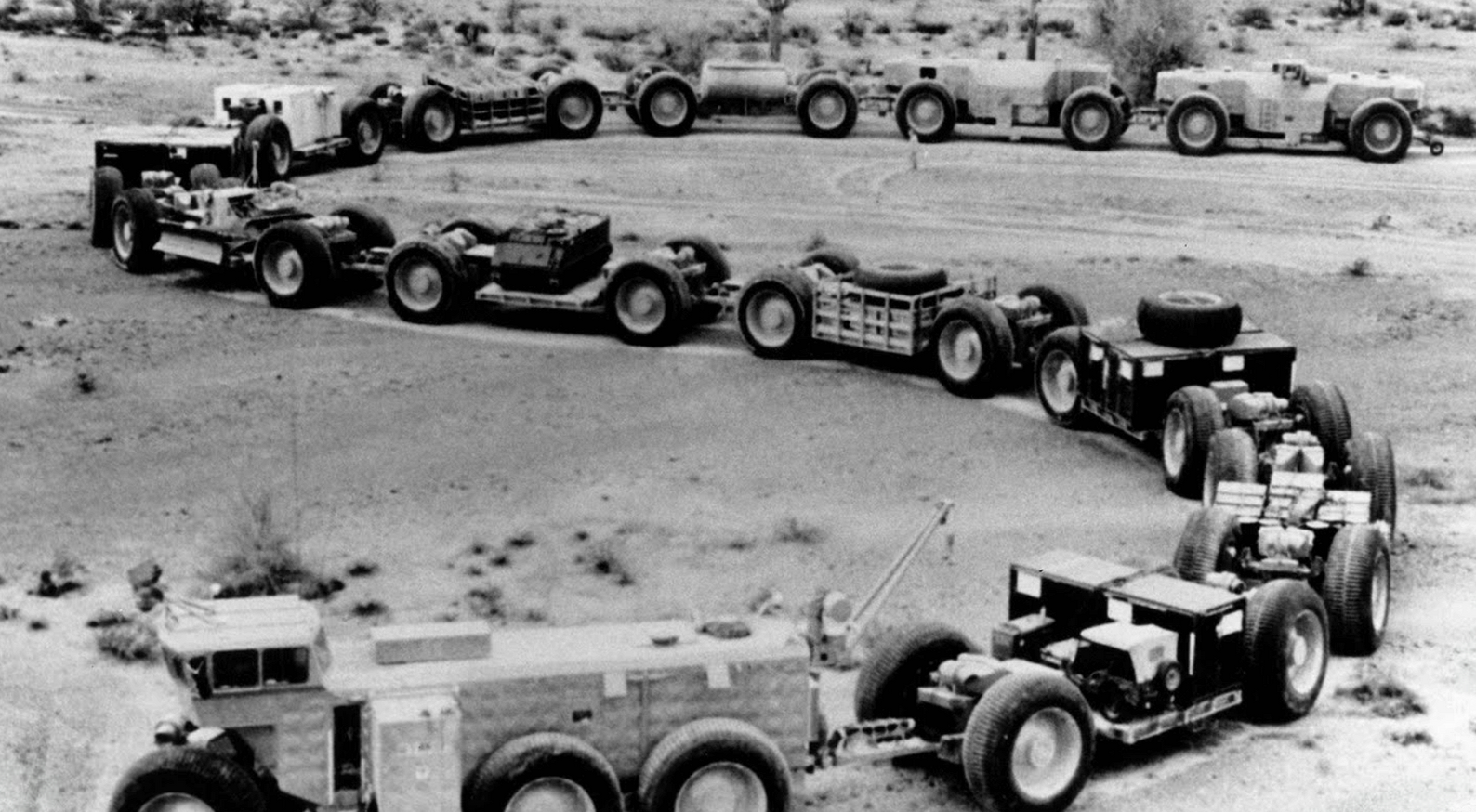 The TC-497 is a truly remarkable feat of engineering. Capable of hauling 150 tons at 20 mph for nearly 400 miles (this range could be extended by carrying extra fuel cars), it was powered by four 1,170-hp gas turbine engines. Only one of these engines was in the locomotive, with the other three were housed in their own separate cars.  It retained the hub motor system from previous overland trains as well, meaning all 54 wheels on the vehicle were powered.

But unlike on LeTourneau's other land trains, the trailers were also steerable, so the turning radius (which was formerly something like a quarter mile) was now much tighter, as seen in the image above.

The locomotive itself was massive at over 30 feet tall, but its size belied the fact that the smaller gas turbine engines allowed LeTourneau to add living quarters as well. The inside of the locomotive could sleep six and had a complete galley and bathroom. The train's total length? 570 feet—nearly two football fields. And due to the train's modular construction, the max length was theoretically infinite. As many power cars as were necessary could be added, along with the fuel to keep them running.

The TC-497 was tested by the Army in 1962 at the Yuma Proving Grounds in Arizona. The results were once again impressive—but so were simultaneous advances in heavy-lift helicopters like the Sikorsky CH-54 Tarhe, a fleet of which could accomplish what the TC-497 promised with a fraction of the time and effort. The time of solving a problem like remote logistics with a massive, almost cartoonish machine like an overland train was over.

In the end, the TC-497 was also abandoned. It sat intact in Arizona for almost a decade before its trailers were scrapped; today only the cab survives, still baking in the desert sun and collecting dust. An unfitting end to one of the largest land vehicles ever made.

Got a tip? Send us a note: tips@thedrive.com