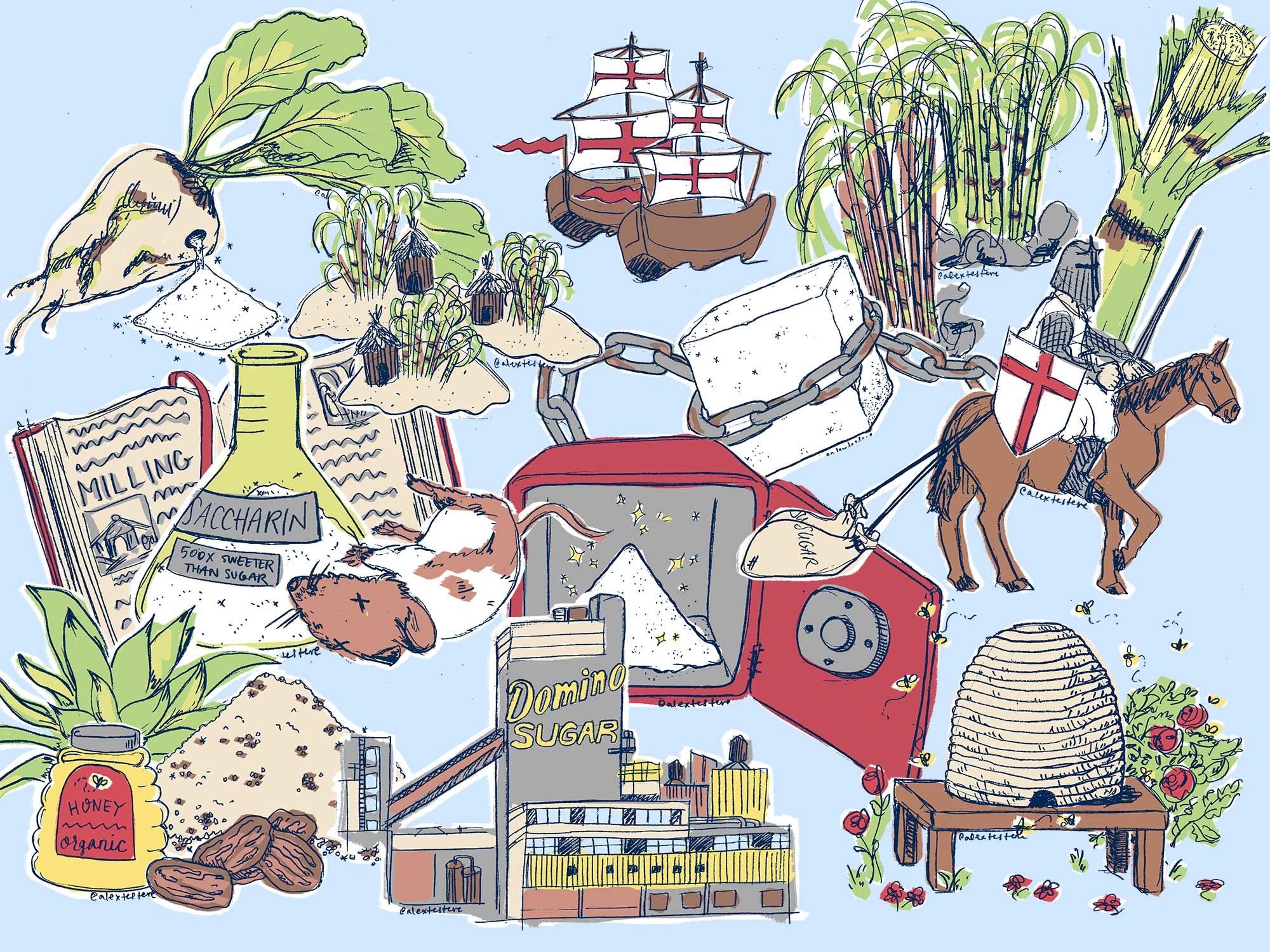 All photos by Alex Testere

If you want to understand Western history, you have to understand sugar. And vice versa. Because sugar’s not just something sweet: over the centuries it’s been a medicine, a spice, a symbol of royalty, and an instrument of disease, addiction, and oppression.

Here’s a selective highlight reel of just how sugar has shaped our world, from India to Hawaii and everywhere in between. 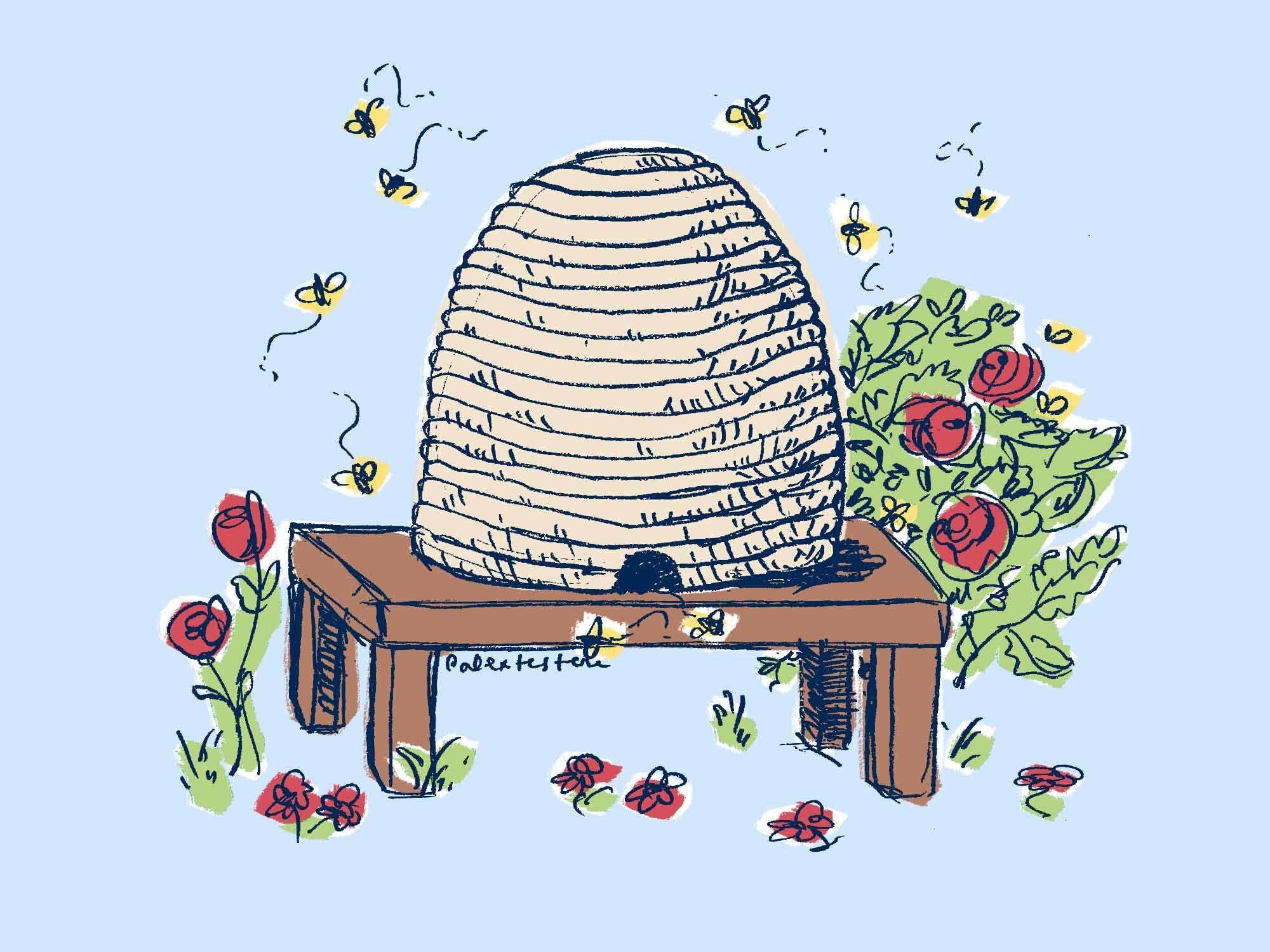 10,000 B.C.: Before sugar ruled the world, honey is queen. Basically any part of Europe, Africa, or Asia that isn’t covered in ice has bees, and thus honey. There are no bees in the Americas, though, so their sweeteners are syrups from trees, agave nectar from cactus, or mashed fruits. People eventually domesticate bees, so instead of happening upon a hive and feeling lucky to encounter honey, they keep hives nearby.

The Birth of Sugar 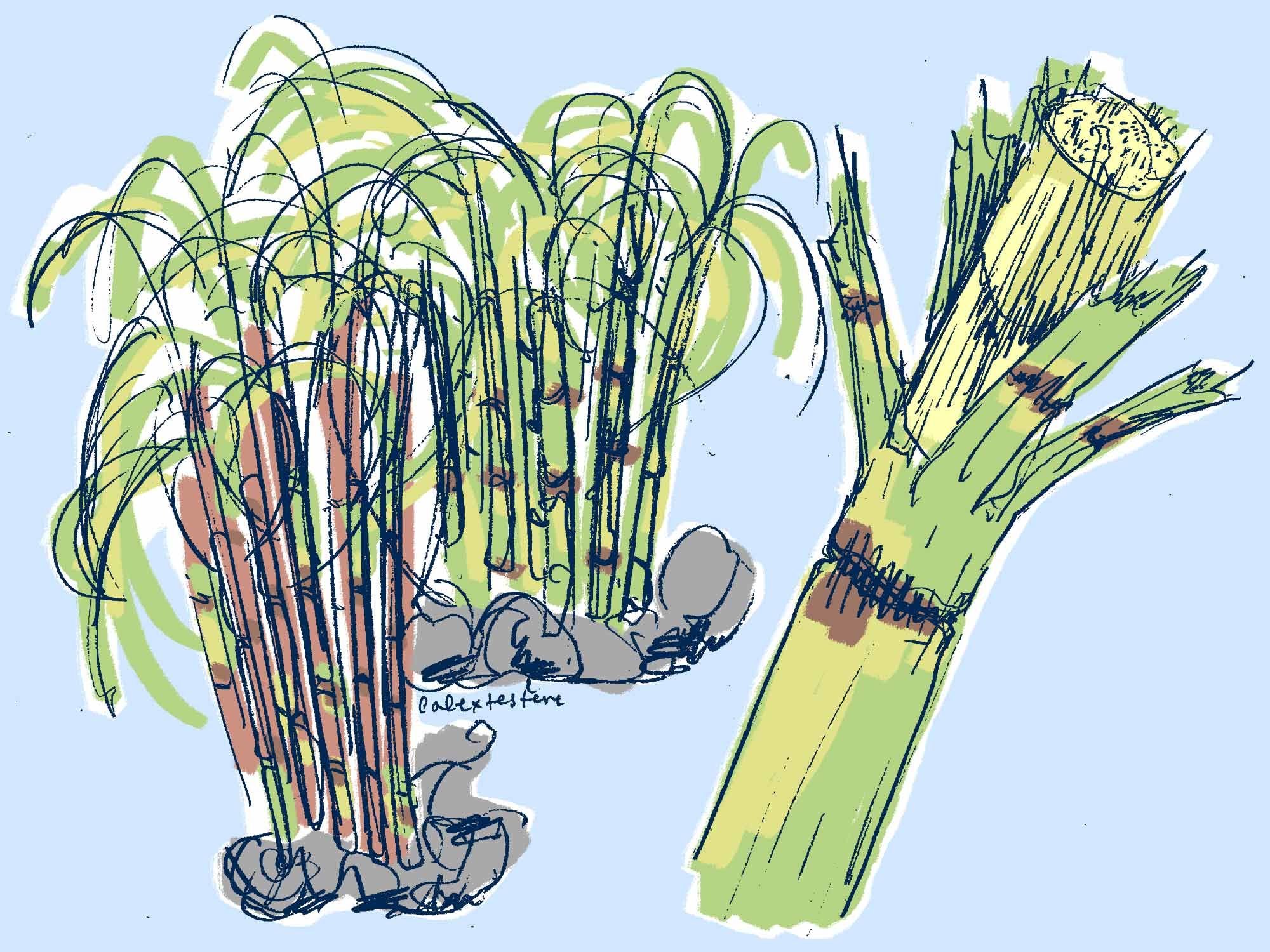 8,000: Sugar is native to, and first cultivated in, New Guinea. Initially, people chew on the reeds to enjoy the sweetness. 2,000 years later, sugar cane makes its way (by ship) to the Phillipines and India. Sugar is first refined in India: the first description of a sugar mill is found in an Indian text from 100 A.D.

400-350: Recipes call for sugar in the Mahabhashya of Patanjali. They include rice pudding with milk, sweet barley meal, and fermented drinks with ginger.

327: Greeks and Romans learn about sugar during visits to India. Nearchus, Alexandria’s general, writes of “a reed in India that brings forth honey without the help of bees, from which an intoxicating drink is made, though the plant bears no fruit.” Small amounts are brought back to the Mediterranean and traded to physicians who use it for medical purposes.

The University of Sugar 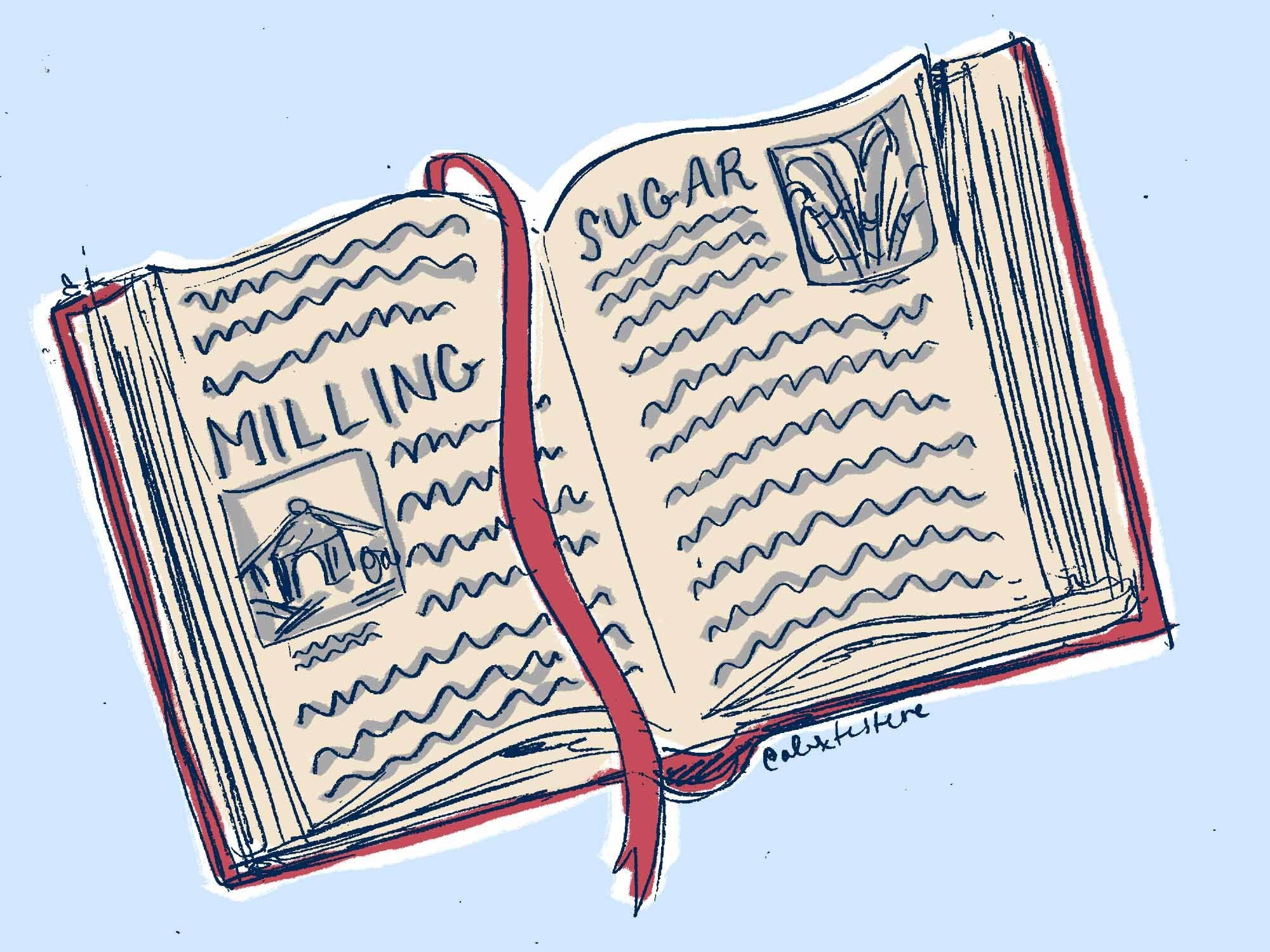 500-600 A.D.: Jundi Shapur, a university in Iran, becomes the meeting place for the world’s scholars (at least those west of China). Greek, Christian, Jewish, and Persian scholars gather to create the first teaching hospital. They study texts from various cultures, and by 600 A.D. they are writing about a potent Indian medicine: sugar. They also develop better methods for processing sugar cane into crystallized sugar. Circa 650: The Arabs were masters of growing, refining, and cooking with sugar; they begin to conceptualize it not just as a medicine or spice, but as a rare delicacy for royalty and the most wealthy. They combine it with ground almonds to create a moldable sweet still popular today—marzipan—and sugar sculptures become regular parts of lavish dinner parties.

As armies of Muslims take over Egypt, Persia, India and the Mediterranean, they bring their knowledge of sugar with them. Many European doctors learn of the medicinal uses for sugar from Arab texts. Under Arab rule, Egyptians master the refining process and become known for making the purest, whitest sugar. 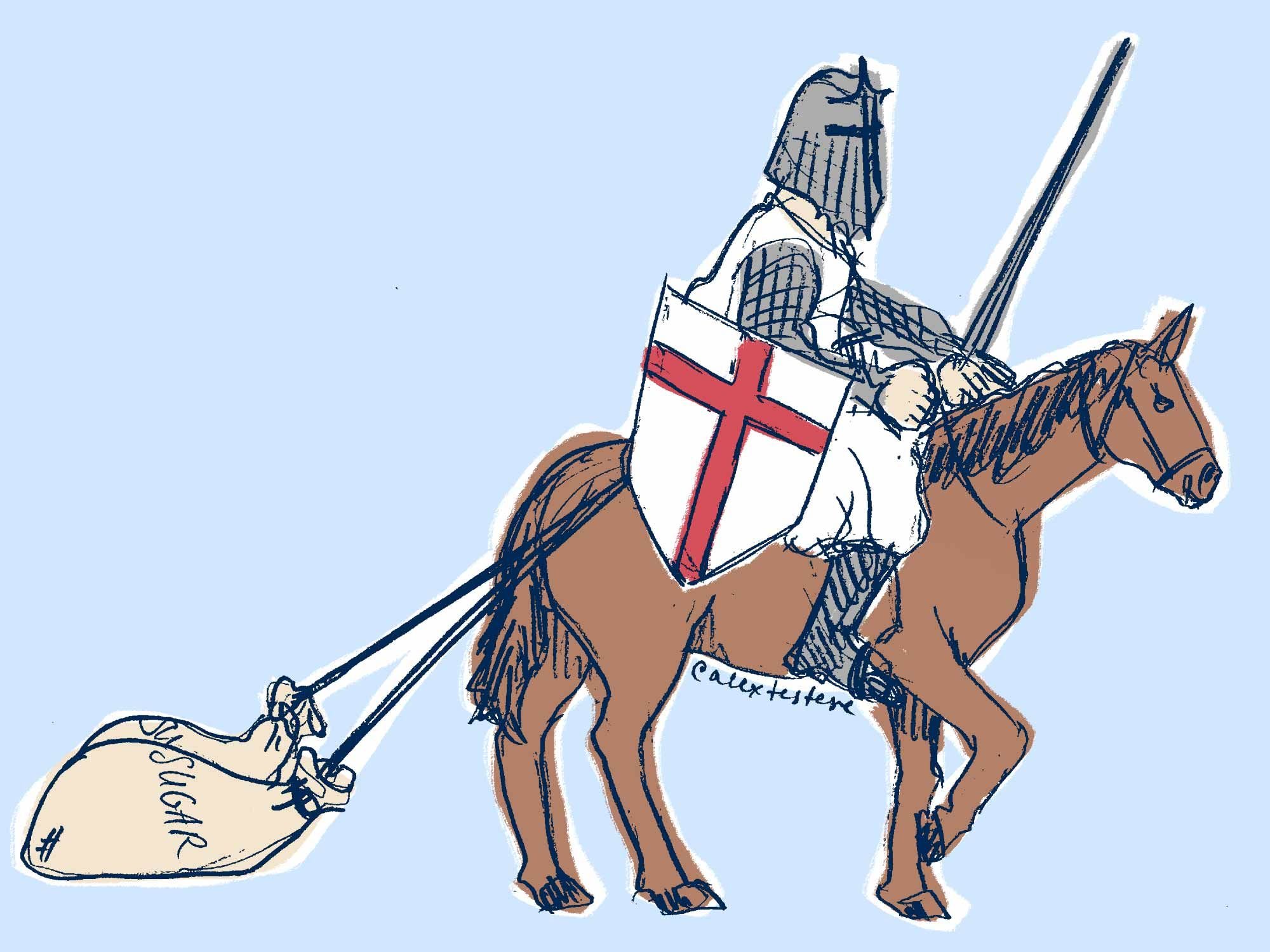 1099: Europeans conquering Jerusalem learn the details of sugar production, which was a profitable business in the city at the time. When the soldiers return home, they bring sugar with them, sparking widespread demand across Europe.

Venice had been trading with the Muslim world prior to the Crusades, which gave them a fast inroad to dominate the sugar trade in the Mediterranean for almost half a century. But the sweetener remains so rare and expensive that it’s only available to the wealthiest classes until the 1300s. 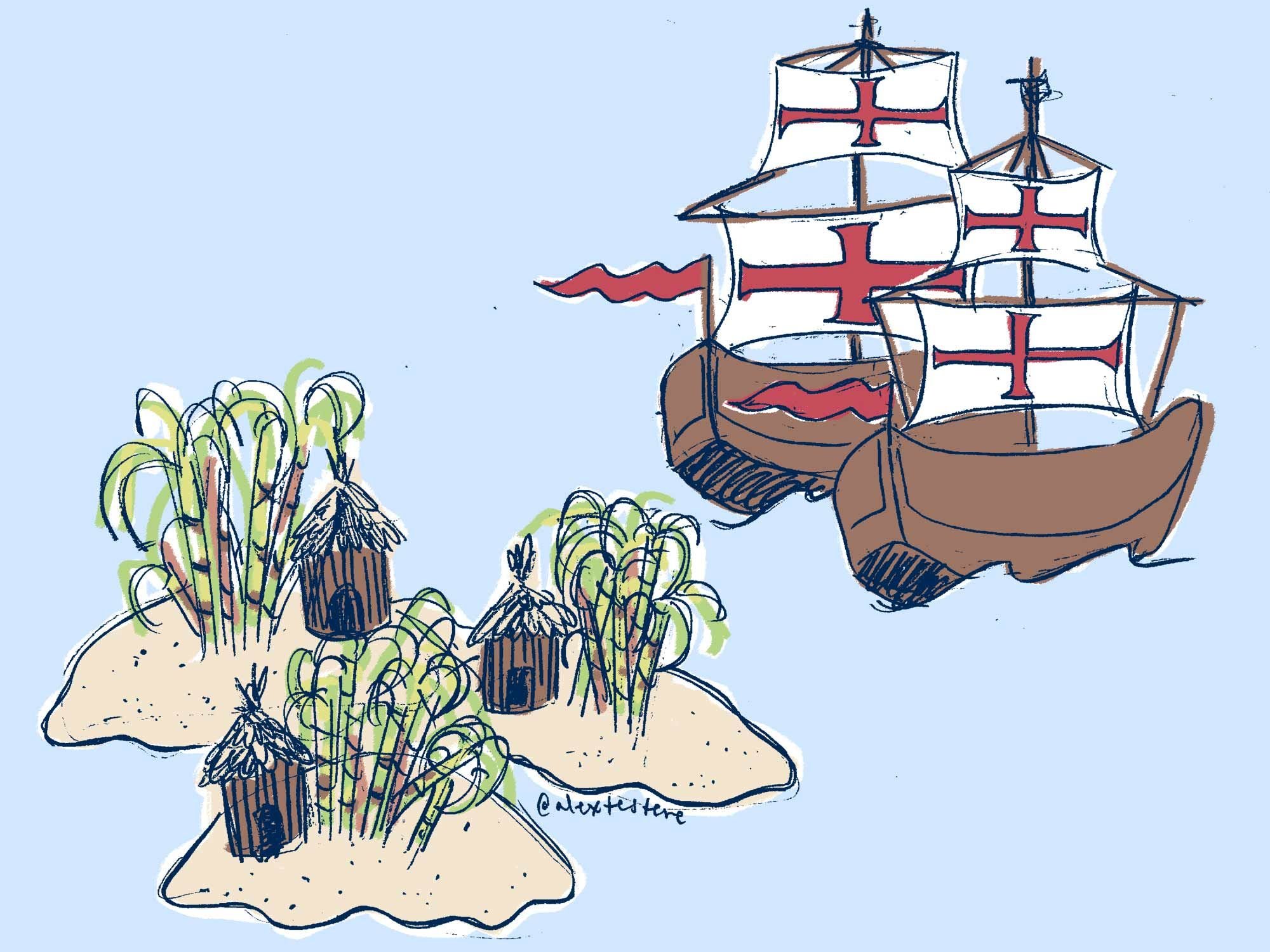 1402-1500: The Spanish colonize the Canary Islands, setting up sugar plantations and enslaving indigenous people to run the mills. Export back to Spain is up and running by 1500, though, when the islands become mostly deforested, the sugar industry falters. In 1493, Columbus brings sugar cane from the Canary Islands to Hispañola (Haiti and the Dominican Republic). By 1516, Hispañiola is the most important sugar producer in the New World.

Mediterranean sugar production faces many challenges: a diminished labor pool, a climate that isn’t ideal for growing cane, and depleted soil and deforestation. Importing sugar is easier than growing and producing it. When the Ottoman Turks conquer Constantinople in 1453, the Middle East, North Africa, and Eastern Europe, they also take control of, and disrupt, the major trade routes. Looking for ways to circumvent the Turks and Arabs, Europeans take to the seas to find new lands on which to grow their own sugar.

1500: Pedro Cabral of Portugal lands on Brazil by accident and establishes sugar plantations there. Portuguese growers make technological advances in sugar production: a new mill design that could be powered by animals, water, or even wind, and a new method for refining sugar that allows them to operate on a larger scale. Brazilian sugar production eventually dominates the industry.

At this point, sugar’s purported medicinal properties have become widely established across Europe. Tabernaemontanus (c.1515-90) writes of it: Nice white sugar from Madeira or the Canaries, when taken moderately cleans the blood, strengthens body and mind, especially chest, lungs and throat, but it is bad for hot and bilious people, for it easily turns into bile, also makes the teeth blunt and makes them decay. As a powder it is good for the eyes, as a smoke it is good for the common cold, as flour sprinkled on wounds it heals them. With milk and alum it serves to clear wine. Sugar water alone, also with cinnamon, pomegranate and quince juice, is good for a cough and a fever. Sugar wine with cinnamon gives vigor to old people, especially sugar syrup with rose water which is recommended by Arnaldus Villanovanus. Sugar candy has all these powers to higher degree. 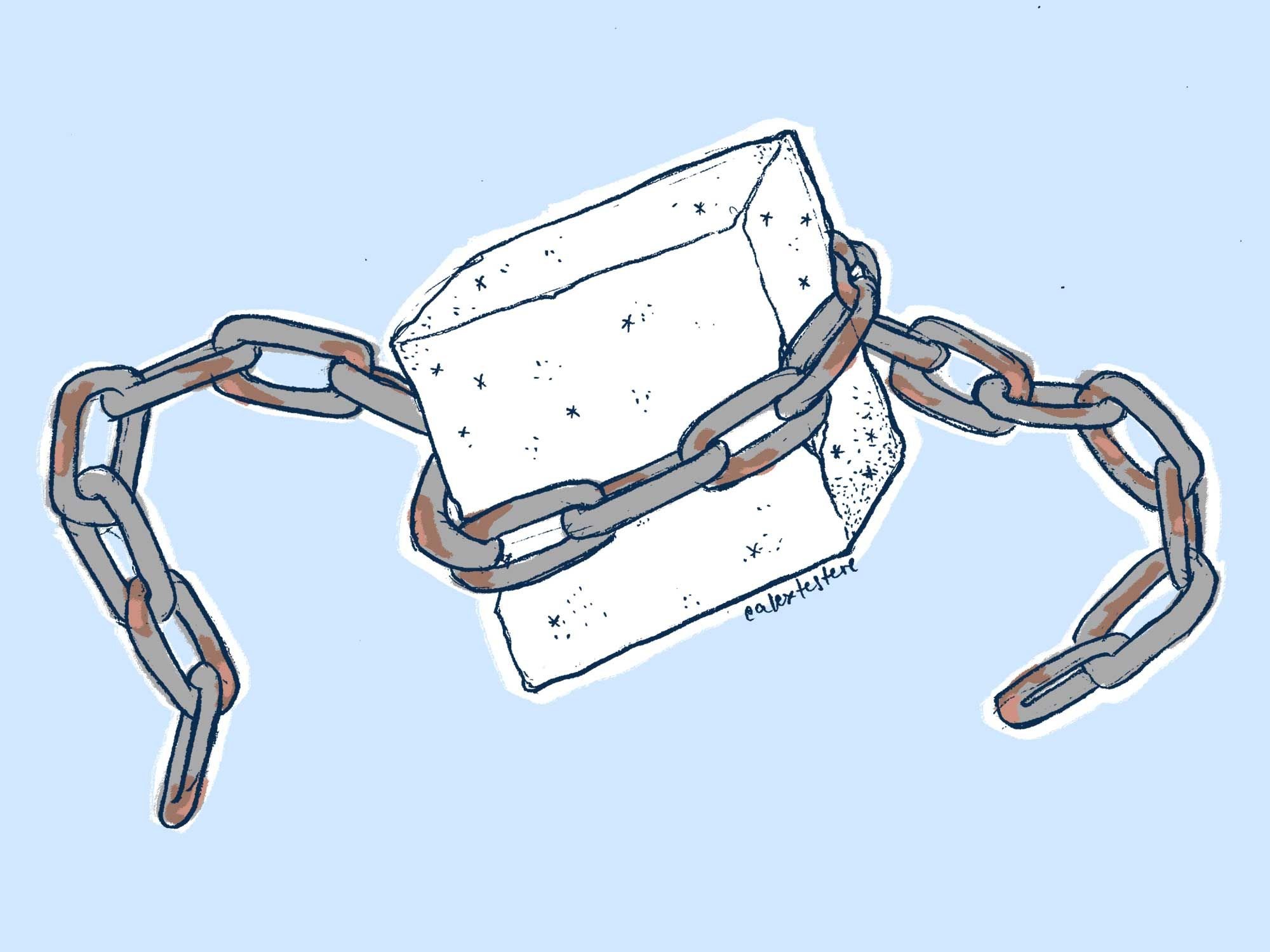 1583: São Tomé, a Portuguese colony that can’t keep up with Brazil’s rate of sugar production, starts exporting slaves to Brazil and other New World islands to work on sugar plantations. It’s a profitable business. By the late 16th century, Brazil out-produces all of the New World colonies and the Mediterranean. The Mediterranean sugar industry collapses.

1600s: At this point, coffee, tea, and chocolate have made their way to Europe. Their arrival drastically increases sugar consumption, making sugar more popular than alcohol ever did, and increasing demand—with lower prices—means a greater reliance on slavery. During the 17th century alone, over half a million African slaves are shipped to Brazil and other New World colonies to work on sugar plantations.

1791: The British Parliament fails to pass the Slave Trade Abolition Bill, which leads to an abstention movement. Abolitionists boycott slave-grown sugar, and the movement increases the demand for slave-free sugar grown in India. American abolitionists also try to avoid Caribbean-grown sugar, turning instead to the maple sugar industry. In 1789, some residents of Philadelphia agree to buy certain amounts at fixed prices in hopes of helping the industry take off. The U.S. government urges Americans to make maple syrup at home and to avoid sweets sold in shops.

1807: Thomas Jefferson signs a bill that prohibits importing slaves to the U.S. Shortly after, the British House of Lords passes an act for the abolition of the slave trade. But slavery remains a widespread practice, continuing in:

1817: Ribbon Cane, a fast-maturing sugarcane variety that grows well in the Louisiana territory’s swampy climate, is introduced to the region’s 75 sugar mills. The new production is enough for Congress to pass tariffs on imported sugar, raising demand for cheap slave labor to grow the American sugar industry. Higher yields and plummeting prices, across the U.S. and the Caribbean, help make sugar cheap and accessible to common consumers.

Rise of the Sugar Beet 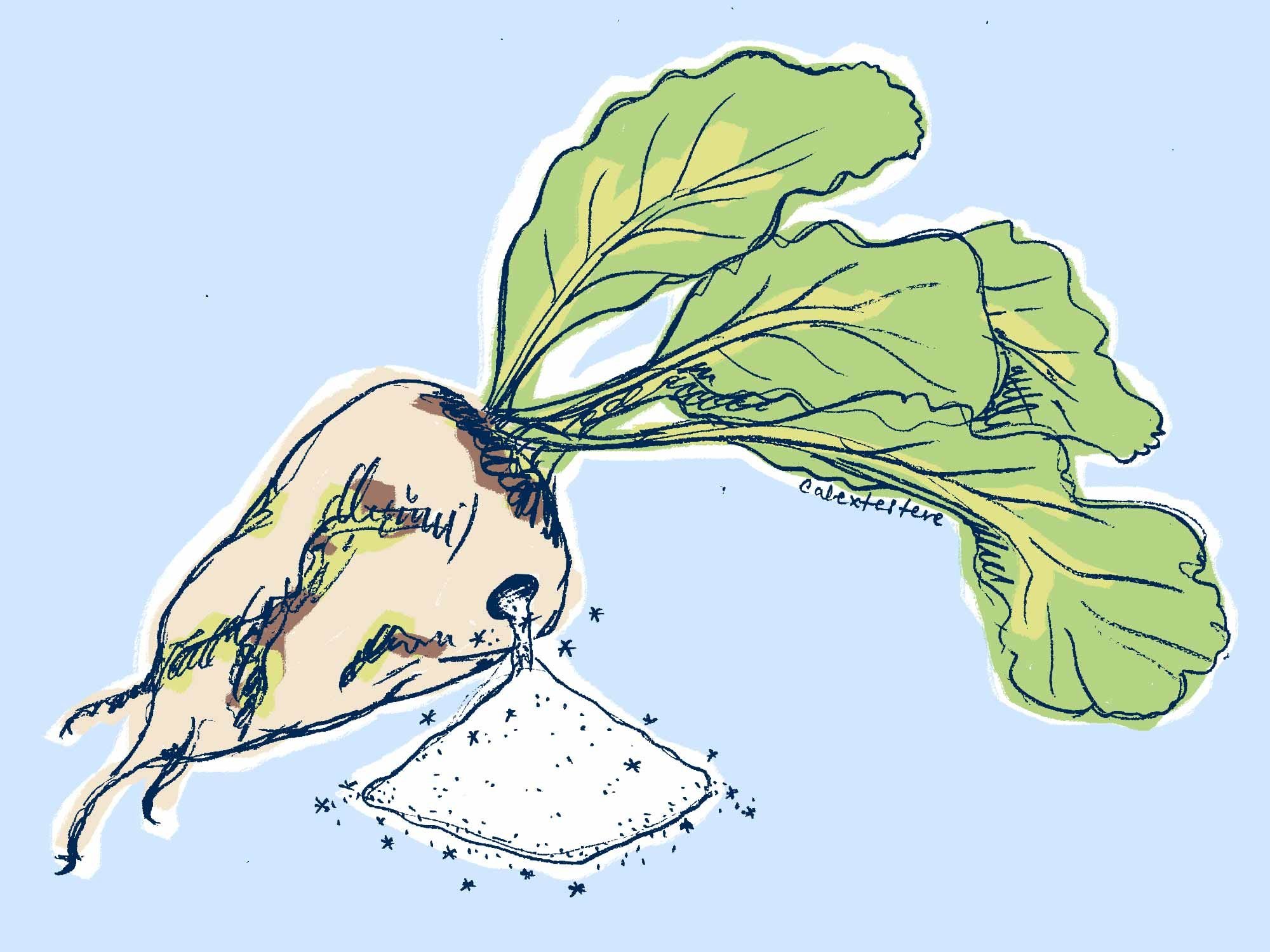 1747: Prussian chemist Andrea S. Margraff discovers that sucrose can be derived from beets.

1801: Franz Carl Achard, a student of Margraff, is credited as the first person to extract sugar from beets on a commercial level.

1815 The beet sugar industry thrives in Europe through the Napoleonic Wars, though Napoleon is the subject of much ridicule for supporting the industry. When the wars end, cheap Caribbean sugar is once again exported to Europe, severely damaging the sugar beet business.

1837: Vilmorin, a French seed company, creates the sugar beet, which has a high sucrose content and a structure designed for optimal sugar extraction. As slavery dies out in the Caribbean, European governments enact policies to support their beet growers. With governmental support, the European beet sugar industry expands through the 20th century. 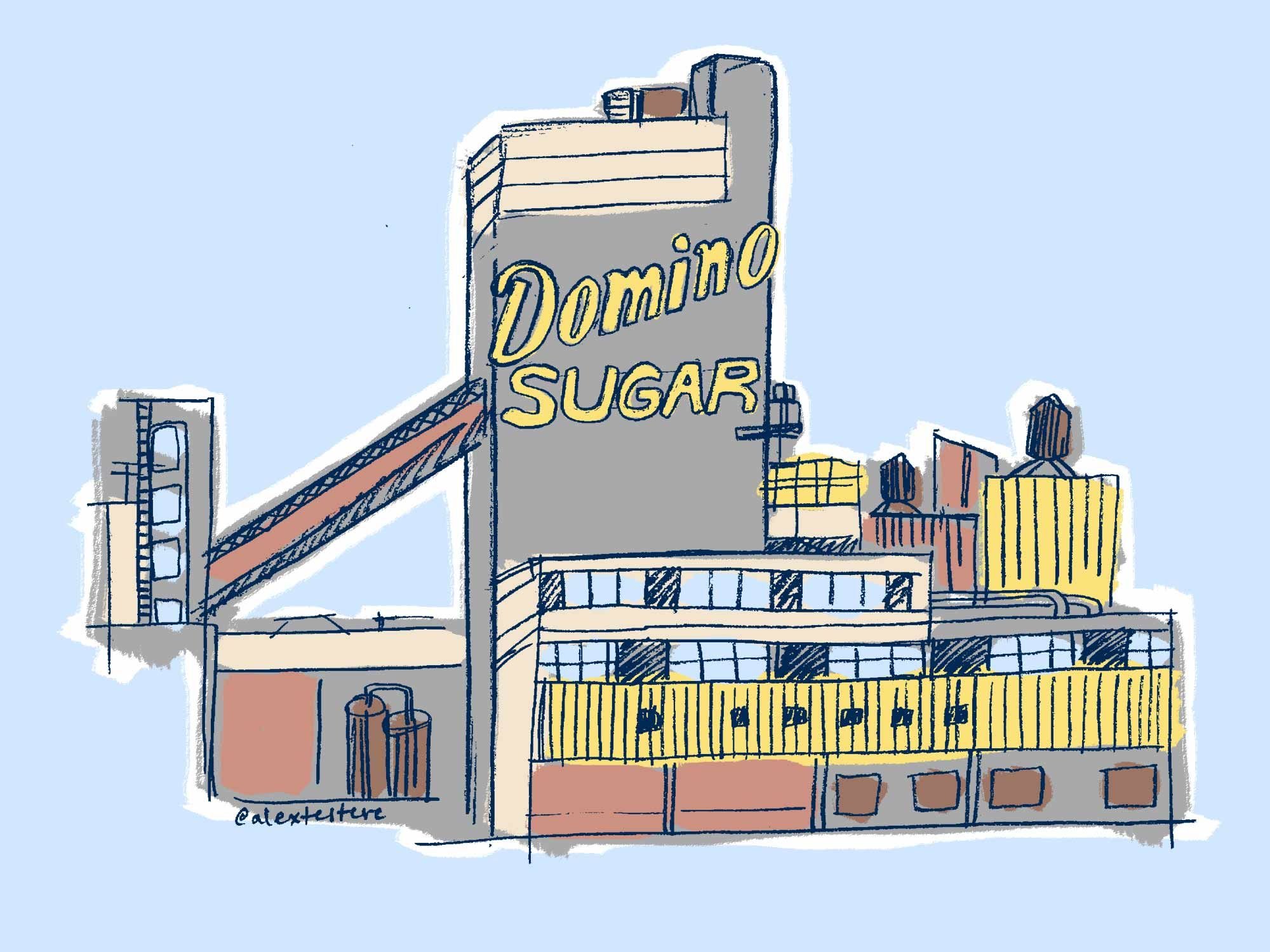 1864: The largest and most technologically advanced sugar refinery in the world opens in Williamsburg on Long Island. With improvements in manufacturing, the production of American sugar increases and drives down the prices.

In 1875, the Reciprocity Treaty between Hawaii and the US permits duty-free importation of Hawaiian sugar. In 1887, American sugar interests force the king of Hawaii to agree to a constitution that gives them significant power in the the kingdom. By 1893, they overthrow the Hawaiian monarchy and pressure the US Congress to annex Hawaii.

1887: Lower prices mean less profit, so in 1887, eight leaders in the American sugar industry form the American Sugar Trust with the intention of reducing production to increase prices and profits for all of their companies. After acquiring more companies, they change their name to The American Sugar Refining Company (ASRC). They close facilities they deem inefficient and combine others with ones they already own, essentially fixing the price of refined sugar.

1900: The ASRC creates the Domino Sugar brand to market all of the sugar they produce under one name. By 1907 ASRC controls 97% of all American sugar production.

1906: C&H sugar company is formed by Claus Spreckles, a German immigrant who ran a beet sugar factory in California (C&H stands for California and Hawaii). Spreckles dominates sugar production in Hawaii until the 1930s, when sugar plantations are converted for other uses. Today C&H is part of Domino Sugar, and there are no more sugar factories or mills in operation on Hawaii. Read about the last days of Hawaiian sugar here. 1942: The American Medical Association’s Council on Food and Nutrition suggests that it “would be in the interest of the public health for all practical means to be taken to limit consumption of sugar in any form in which it fails to be combined with significant proportions of other foods of high nutritive quality.”

1966: Medical professionals recommend a decrease in sugar intake, noting new studies that correlate sugar consumption with diabetes and other diseases. These studies, and the increasing rates of diabetes and obesity, spark an interest in sugar substitutes.

The Age of Artificial Sweeteners 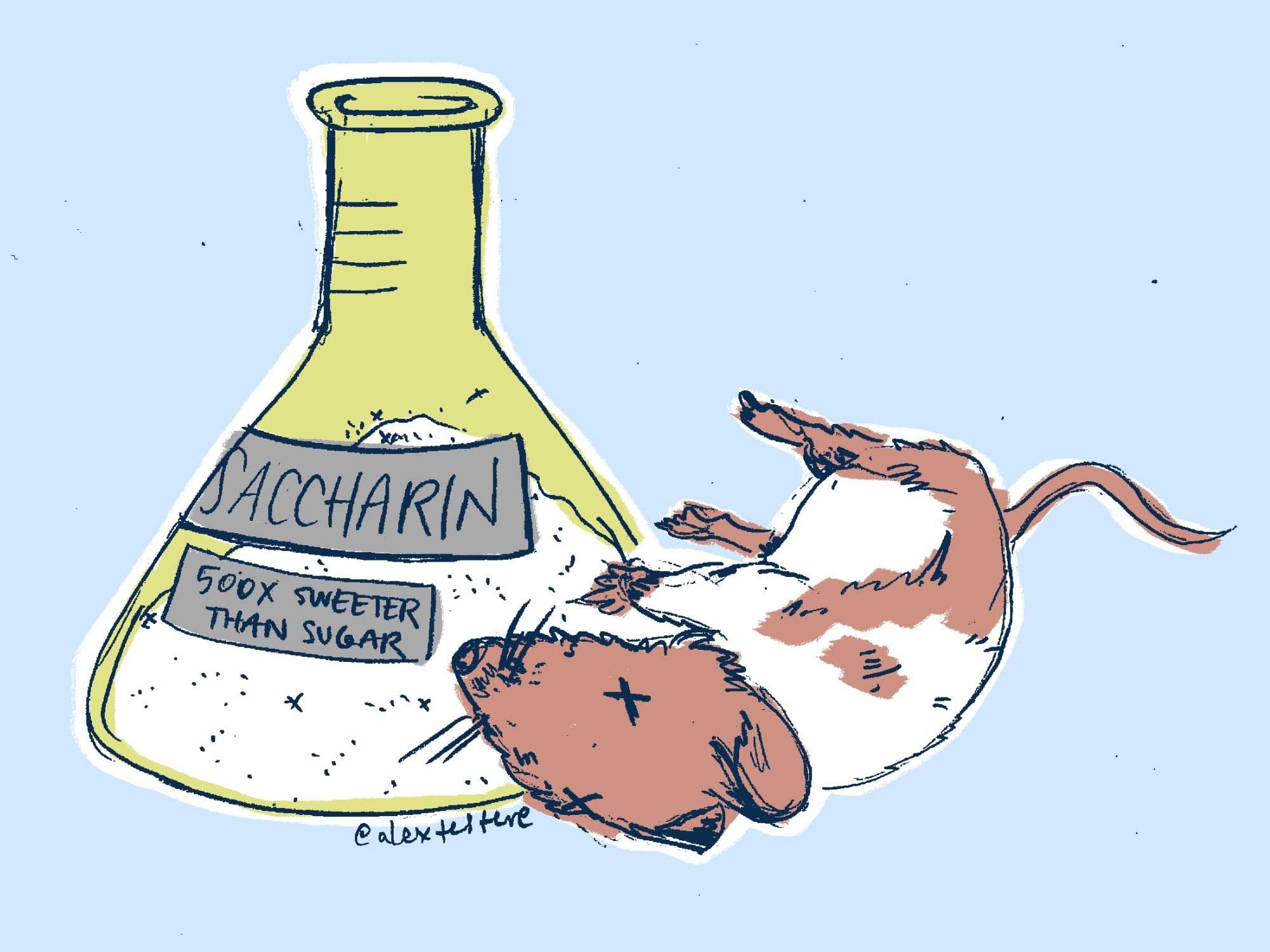 1879: A graduate student at Johns Hopkins refines saccharin, a crystalline powder 300 to 500 times sweeter than sugar but with no calories. It doesn’t see widespread use until World War I, when sugar was subject to strict rationing; once sugar became available again, saccharine was shunted to diet foods. A 1977 study reports that saccharin caused cancer in test animals, causing the FDA to place a moratorium on saccharine use, which is only lifted in 1991.

1952: Calcium cyclamate starts appearing in diet sodas. Studies in the 1960s show that it’s likely carcinogenic, and the FDA bans the sweetener in 1970.

1998: Sucralose, which goes by the brand name of Splenda and is a whopping 600 times sweeter than sugar, is approved for use in the U.S. Artificial sweeteners supplement or replace sugar in all kinds of food products, but have yet to prove rigorously measurable health benefits.

And We Come Full Circle 2000s: As artificial sweeteners fall out of vogue, ancient forms of sugar make a major comeback: agave nectar, stevia, dates, and of course honey, which is delicious, shelf-stable, and linked to many health benefits. Nothing beats the classics.