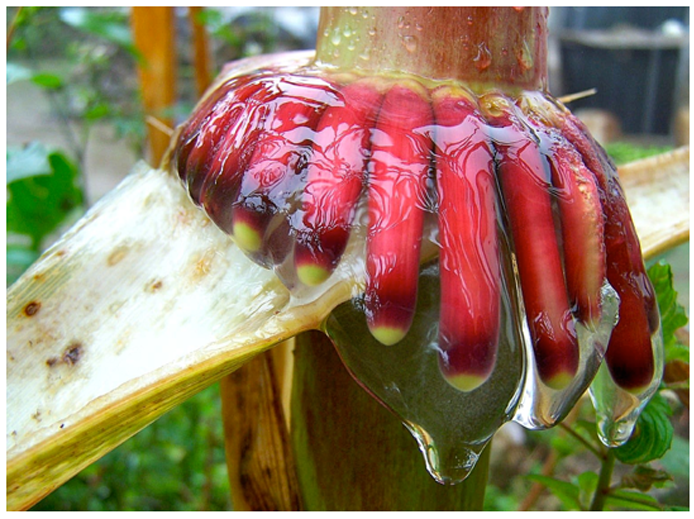 The corn variety Sierra Mixe grows aerial roots that produce a sweet mucus that feeds bacteria. The bacteria, in turn, pull nitrogen out of the air and fertilize the corn. If scientists can breed this trait into conventional corn, it could lead to a revolution in agriculture. Photo from Wikimedia Commons / CC BY 4.0.

In the 1980s, Howard-Yana Shapiro, now chief agricultural officer at Mars, Incorporated, was looking for new kinds of corn. He was in the Mixes District of Oaxaca in southern Mexico, the area where the precursors to maize (aka corn) first evolved, when he located some of the strangest corn ever seen. Not only was it 16 to 20 feet tall, dwarfing the 12-foot stuff in American fields, it took six to eight months to mature, far longer than the 3 months needed for conventional corn. Yet it grew to those impressive heights in what can charitably be called poor soil, without the use of fertilizer.. But the strangest part of the corn was its aerial roots--green and rose-colored, finger-like protrusions sticking out of the corn’s stalk, dripping with a clear, syrupy gel.

Shapiro suspected that those mucousy fingers might be the Holy Grail of agriculture. He believed that the roots allowed this unique variety of corn, dubbed Sierra Mixe and locally bred over hundreds or even thousands of years, to produce its own nitrogen, an essential nutrient for crops that is usually applied as fertilizer in epic amounts.

The idea seemed promising, but without DNA tools to look into the specifics of how the corn was making nitrogen, the discovery was shelved. Nearly two decades later, in 2005, Alan B. Bennett of the University of California, Davis—along with Shapiro and other researchers—began using cutting-edge technology to look into the nitrogen-fixing properties of the phlegmy corn, finding that indeed, bacteria living in the mucus were pulling nitrogen from the air, transmuting it into a form the corn could absorb.

Now, in 2018, after over a decade of field research and genetic analysis, the team has published their work in the journal PLOS Biology. If the nitrogen-fixing trait could be bred into conventional corn, allowing it to produce even a portion of its own nitrogen, it could reduce the cost of farming, reduce greenhouse gas emissions and halt one of the major pollutants in lakes, rivers and the ocean. In other words, it could lead to a second nitrogen revolution.

The synthetic production of nitrogen may be the greatest achievement of the 20th century. The discovery of the Haber-Bosch process and its refinements, in which nitrogen is stripped out of the air under high heat and pressure in the presence of a catalyst, has led to three separate Nobel prizes. And they are well deserved. It’s estimated that crop yields more than doubled between 1908 and 2008, with synthetic nitrogen fertilizer responsible for up to half that growth. Some researchers have tied the massive growth in human population in the last seventy years to the increased use of nitrogen fertilizer. Without it, we’d have to farm almost four times as much land or have billions of fewer people in the world.

But producing all that nitrogen has consequences. It’s estimated that making fertilizer via the Haber-Bosch process uses between 1 and 2 percent of the world’s energy, emitting lots of greenhouse gases. And synthetic nitrogen routinely washes off fields into waterways, leading to massive algae blooms that suck up all the oxygen, killing fish and other organisms. So much nitrogen goes into rivers and streams that large dead zones have developed at the mouths of the world’s rivers, including one in the Gulf of Mexico that last year was the size of New Jersey. Mark Sutton of the UK Centre for Ecology and Hydrology calls nitrogen “the Godfather of pollution”—its effects are everywhere, but you never really see the culprit.

But we can’t just quit nitrogen without seeing major reductions in agriculture. While better management and farming practices can help keep it out of waterways, those strategies aren’t enough to fix nitrogen’s ecological problems. That’s why researchers have for decades wondered if there was a way to help cereal crops like corn and wheat produce their own nitrogen.

The idea is not as farfetched as it sounds. Lots of plants, in particular legumes like soybeans, peanuts and clover, have a symbiotic relationship with Rhizobium bacteria, which produce nitrogen for them. The plants grow root nodules where the bacteria take up residence and sip on plant sugars while converting nitrogen in the air into a form the plants can use. If a similar symbiotic relationship could be found that works in cereal crops like corn and wheat, researchers believe we could reduce our use of the pollutant.

That’s why the mucus corn is so important, and why Bennett and his team spent eight years studying and re-studying the bacteria and gel to convince themselves that the corn was indeed able to produce its own nitrogen. Using DNA sequencing, they were able to show the microbes in the slime carried genes for fixing nitrogen and demonstrated the gel the corn excretes, which is high sugar and low oxygen, is perfectly designed to encourage nitrogen fixation. Using five different tests they showed that the nitrogen produced by the microbes then made its way into the corn, providing 30 to 80 percent of the plant’s needs. They then produced a synthetic version of the slime and seeded it with the microbes, finding that they produced nitrogen in that environment as well. They even grew Sierra Mixe in Davis, California, and Madison, Wisconsin, showing that it could perform its special trick outside its home turf in Mexico.

“This mechanism is totally different from what legumes use,” Bennett says, adding it may exist in other crops as well. “It’s certainly conceivable that similar types of systems exist in many cereals. Sorghum, for example, has aerial roots and mucilage. Maybe others have more subtle mechanisms that occur underground that could exist more widely. Now that we’re aware, we can look for them.”

Co-author Jean Michel-Ane from the University of Wisconsin, Madison, agrees that this discovery opens up all types of new possibilities. “Engineering corn to fix nitrogen and form root nodules like legumes has been a dream and struggle of scientists for decades. It turns out that this corn developed a totally different way to solve this nitrogen fixation problem. The scientific community probably underestimated nitrogen fixation in other crops because of its obsession with root nodules,” he says in a statement. “This corn showed us that nature can find solutions to some problems far beyond what scientists could ever imagine.”

It turns out that nature has even more nitrogen-producing tricks up her sleeve that researchers are just getting a handle on. There are several other ongoing projects aimed at getting cereal and vegetable crops to do the Haber-Bosching for us. One of the most promising is the use of endophytes, or microorganisms like bacteria and fungi that live in the intercellular spaces of plants. University of Washington researcher Sharon Doty got interested in the organisms a couple decades ago. She was studying willow and poplar trees, which are among the first trees to grow on disturbed land after events like a volcanic eruption, floods or rockfall. These trees were growing out of river gravel, with hardly any access to nitrogen in the soil. Inside their stems, however, Doty found endophytes that fixed the nitrogen for the trees, no root nodules necessary. Since then, she’s teased out dozens of various endophyte strains, many of which help plants in surprising ways. Some produce nitrogen or phosphorus, another important nutrient, while others improve root growth and some allow plants to survive in drought or high-salt conditions.

“There [are] a whole slew of different microbes that can fix nitrogen and a broad range of plant species impacted by them,” she says. Her tests have shown that the microbes can double the productivity of pepper and tomato plants, improve growth in rice, and impart drought tolerance to trees like Douglas firs. Some even allow trees and plants to suck up and break down industrial contaminants and are now being used to clean up Superfund sites. “The advantage of using endophytes is that it’s a really large group. We’ve found strains that work with rice, maize, tomatoes, peppers and other agriculturally important crop plants.”

In fact, endophytes might make it into farmers’ hands sooner rather than later. The Los Altos, California-based IntrinsyxBio is commercializing some of Doty’s endophytes. Chief Science Officer John L. Freeman says in an interview the company is on track to have a product ready for market in 2019. The goal is to deliver several strains of endophytes into plants, most likely by coating the seeds. After those bacteria take up residence inside the plant, they should pump out about 25 percent of the nitrogen it needs.

Another biotech company, called Pivot Bio, recently announced it is beta testing a similar solution, using nitrogen-fixing microbes that grow in the root systems of corn.

The newly emerging field of synthetic biology is also taking a crack at the nitrogen problem. Boston-based Joyn Bio, formed last September, is a co-project between Bayer and Ginkgo Bioworks, a biotech company with experience creating custom yeasts and bacteria for the food and flavoring industry, among other “designer microbe” projects. Joyn is currently combing through Bayer’s library of over 100,000 microbes to find a host that can successfully colonize plants, similar to Doty’s endophytes. Then they hope to tweak that “host chassis” with genes that will allow it to fix nitrogen. “Rather than rely on nature and find a magic microbe, which we don’t think exists, we want to find our host microbe and fine tune it to do what we need it to do for corn or wheat,” says Joyn CEO Michael Miille.

The Gates Foundation is also in on the game, supporting projects attempting to impart the nitrogen-fixing abilities of legumes into cereals. Still other teams are hoping that the advent of supercharged quantum computing will open up new realms of chemistry and identify new catalysts that will make the Haber-Bosch process much more efficient.

While it’s unlikely that one solution alone will be able to replace 100 percent of the synthetic fertilizer humans use, perhaps together these projects could make a serious dent in nitrogen pollution. Bennett hopes that Sierra Mixe and what his team has learned from it will be part of the nitrogen revolution, though he admits it’s a very long leap before his slimy corn fingers start producing nitrogen in conventional crops. He now wants to identify the genes that produce the aerial roots and pin down which of the thousands of microbes discovered in the mucilage are actually fixing the nitrogen.

“I think what we’re doing could be complementary to those [endoyphte and synthetic biology] approaches,” he says. “I think we’ll see many divergent strategies, and in 5 to 10 years something will emerge that impacts how corn gets nitrogen."