The Badass Lady Pilot Who Revolutionized the Art of Food Writing

With a name like Clementine Paddleford, she should have been unforgettable. So why don’t you know who she is? 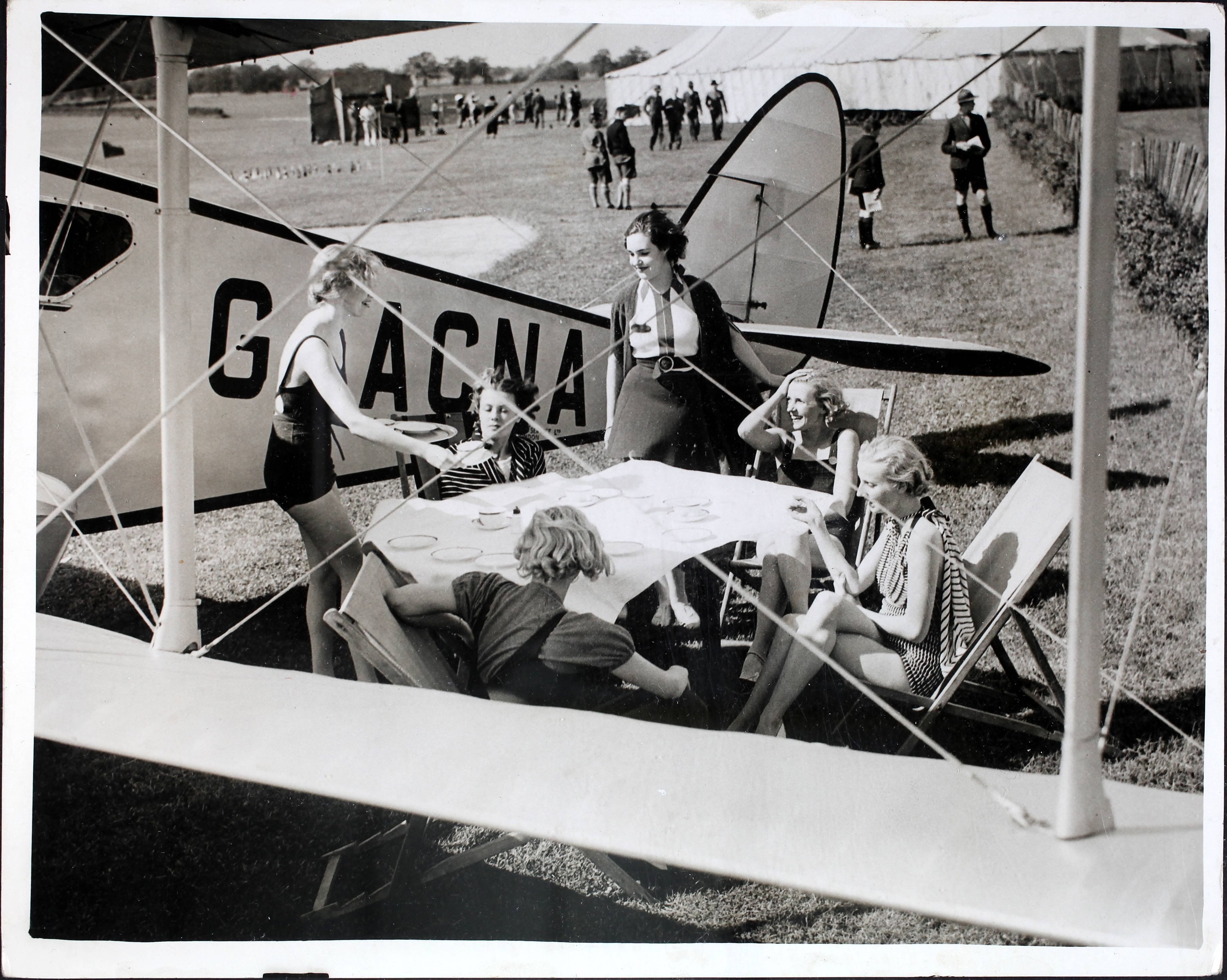 In the Long Island Sound, the world’s fastest nuclear submarine was cruising 200 feet beneath the waves. Sirens and horns whined as the crew tested the submarine’s alarms. As usual, the USS Skipjack hummed with activity. Sailors walked purposefully through tight passageways, their buzz cuts skimming the ceilings. That wasn’t the only buzz in the air: Word on the ship was that Clementine Paddleford was touring the galley.

It was March 26, 1960, and after a year of wrangling, the U.S. Navy had finally given the 61-year-old journalist permission to board the Skipjack. Now she was in the submarine’s capsule kitchen, a cape around her shoulders and a notebook in hand, scoping out the 54-square-foot room where cooks prepared nearly 300 meals a day for the crew. They flurried about, making strawberry shortcake, prime rib, and endless pots of coffee from ingredients compressed to save space. Though she was no stranger to unusual kitchens, the endeavor was nerve-racking. Paddleford would later write that as she boarded the ship loaded with torpedoes, she’d been “clothed in gooseflesh.”

But she hadn’t worked so hard just to walk away empty-handed—she’d get her story, along with a brownie recipe that could feed 80. Whether Paddleford was inspecting a kitchen at the bottom of the ocean or piloting a plane across the country in search of new delicacies, she was a fearless pioneer, intent on uncovering tales that would resonate with the American public.

Growing up on a farm in Stockdale, Kansas, taught Paddleford to appreciate the difficulties of ushering food from field to plate—if you craved pork, you needed to kill one of the pigs out back—and her mother instilled a strong work ethic, cautioning, “Never grow a wishbone, daughter, where your backbone ought to be.”

As Kelly Alexander and Cynthia Harris recount in their comprehensive 2009 biography, Hometown Appetites: The Story of Clementine Paddleford, the Forgotten Food Writer Who Chronicled How America Ate, Paddleford was ambitious and nosy, spending her high school years writing for the local newspaper. She would head to the local train depot at 6 a.m. after her chores to stake out stories. One morning, the 15-year-old spotted a local businessman boarding a train with a woman who wasn’t his wife. It could have been the scoop of her young career, but the story never ran. Her father wouldn’t let her file it.

Little else could stop her. She majored in industrial journalism at Kansas State, where she was an editor at both the college newspaper and the local paper she reported for as a teenager. All the while, she earned money freelancing for Kansas newspapers and farm magazines.

After graduating, Paddleford packed her bags with notepads and pencils and left Manhattan, Kansas, for Manhattan, New York. As Alexander and Harris explain, she worked feverishly, freelancing for The Sun, The New York Telegram, and papers back in Kansas. She made $8 per Sun story, writing puff pieces like “Girl Uses a Fake Limp to Get Seat.” Despite her motivation, she struggled to make ends meet and supplemented her income with babysitting, waiting tables at a seminary, writing press releases for an interior designer, and working at the Gimbels umbrella counter.

Paddleford felt like a failure. “Sometimes I fairly hate New York,” she wrote to her mother. In the spring of 1922, she attended a wedding in Chicago, and within two weeks, she’d made the Windy City her new home. Paddleford promptly landed two jobs—with the Agricultural News Service and the Milk Market News—making a name for herself covering everything from price-fixing scandals to shipments coming in all the way from China.

Within two years, New York had noticed. The editors of Farm & Fireside magazine invited Paddleford to be the women’s editor, and she returned to the city. She cultivated a chatty, authoritative voice, reaching out to readers directly for stories. They reached back: Response increased 179 percent during her tenure. Unlike other editors, she refused to be chained to her desk, traipsing onto Midwest farms run by women to find out how they lived. On another assignment, she reported from the home of famous flapper Clara Bow.

In 1930, Paddleford joined the Christian Herald, the nation’s largest religious newspaper, and picked up the church kitchen beat. She wrote increasingly about food: how to brew a good cup of coffee, how Dickens served Christmas pudding. At the time, most food writing was dry, short, and scientific. Journalists explained the benefits of nutrients and how to measure ingredients for recipes. Paddleford’s writing was different. She focused on the people and stories behind recipes instead of just the recipes themselves. Though her turns of phrase would verge on overwrought through the years—mushrooms were “pixie umbrellas,” the sun didn’t rise when it could “flame into a new day”—her descriptions were so brilliant that readers could almost taste each dish. She tapped into their emotions, too: “We all have hometown appetites,” she said. “Every other person is a bundle of longing for the simplicities of good taste once enjoyed on the farm or the hometown they left behind.” Her words made people think about food not only as sustenance but as an experience. Then, just as her career was blossoming, her voice became raspy.

Paddleford was a no-nonsense farm girl. She wasn’t going to visit the doctor over a measly sore throat. But as weeks passed, her hoarseness didn’t improve. The pain became so unbearable that she finally caved and visited New York Hospital. The doctor had bad news: The 33-year-old had laryngeal cancer.

Paddleford was devastated. She needed her voice. How could she do her job as a reporter without talking to people? The timing felt particularly cruel. Finally on the cusp of a national career, she was about to lose what made her exceptional.

Doctors gave her two options. They could stop the cancer by removing her larynx and vocal cords, leaving her unable to speak. Or she could undergo a partial laryngectomy, a new and unpredictable procedure that removed part of her larynx. In this case, she would risk a relapse.

There was only one answer for Paddleford: She needed to speak. Surgeons removed part of her larynx and inserted a permanent tracheotomy tube. For the rest of her life, she’d have to breathe through a hole in her throat—but she could talk. To speak, she had to press a button on the side of her throat to allow air to pass through her mouth.

Though it took her a year to speak above a whisper, within six months of surgery she was back to work, a black velvet ribbon wrapped around her neck to hide the hole. Her low, grating voice didn’t stop her from reporting with her typical vigor. She’d later say it was a blessing in disguise: “People never forget me.”

In March 1936, she took over the New York Herald Tribune’s market column. She woke before dawn and hustled to the markets to file copy about produce prices. It wasn’t her creative dream, but Paddleford saw it as a strategic move—the opportunity to write about food full time.

The decision wasn’t simply borne out of a passion for good eating—it was also business savvy. In the waning years of the Great Depression, Paddleford wanted a steady income from a beat she knew would keep people interested even in hard times. Brainstorming what people needed most, she wound up with shoes and food. And obviously, she liked food better.

That bet paid off. Her singular voice was a perfect fit for a regular column. Reader response nearly tripled in her first year. Soon she was the paper’s food editor, and by 1940, she’d become the food editor of the nationally syndicated Sunday magazine This Week.

Her work was game changing. Paddleford was the first American writer to approach food with as much respect and research as other journalists did with the established serious topics. She used it as a vehicle to talk about the Republican National Convention in Philadelphia and the New York World’s Fair. When Winston Churchill visited Missouri in 1946, most reporters parsed his Iron Curtain speech. Paddleford wrote about the buffet menu.

She traveled the country, looking for good food and good stories in the cooking pots at hobo conventions and the pantries at governors’ mansions, in the kitchens of fine restaurants in New Orleans, Louisiana, and the galley of an 85-foot yacht sailing the Gulf of Mexico. She cajoled kitchen secrets out of everyone from actress Joan Crawford to caterers at the Ritz-Carlton. By the late 1940s, she was filing stories from sugar shacks in Vermont, salmon canneries in Alaska, and trailer homes in Florida, traveling more than 50,000 miles a year as a “roving food editor.” It was more than a full-time job: Paddleford worked 12-hour days, starting a column each day at 5 a.m. Surrounded by a personal library of 1,900 cookbooks, she guzzled coffee and, to save time, typed in a personalized shorthand. (A secretary translated it.) When she visited the office, she brought her cats. She didn’t just travel to do her reporting—she flew a Piper Cub plane. Between 1948 and 1960, she logged more than 800,000 miles, enough mileage to span the globe 31 times. In her private life, she kept track of her male friends according to what they ate. She almost never cooked at home. One of her two maids prepared her dinner, which she’d eat at her desk.

She was an educator, exposing the country to new dishes. And she was practical: During World War II, she tested turtle, beaver, bear, and whale as substitutes for rationed beef, and she promoted American attempts at European cheeses. (Her recipes, however, called for Cheez-Its and canned mushroom soup more often than they called for truffles and fresh lobster.)

The work paid off. Paddleford earned a salary of $25,000—about $250,000 today. More important, she became America’s steward of regional food, the first person to celebrate the nation’s cuisine as uniquely multicultural. “Tell me where your grandmother came from and I can tell you how many kinds of pie you serve for Thanksgiving,” she wrote in 1960.

At Paddleford’s height in the late 1950s, roughly 12 million households read her columns. In 1960, she published How America Eats, a collection of regional recipes and stories. It was enormously successful and went through several print runs. By then, other writers had begun to stake claims in Paddleford’s territory. Food writing was now a legitimate enterprise, and people wanted more.

But when she died in 1967, the genre she created forgot her. Her name was eclipsed by new television food personalities (Julia Child’s The French Chef went on air in 1963). By 1969, her book was out of print. The work that had consumed her life was carried on by other writers who recalled her name only dimly—and as years passed, not at all.

Still, Paddleford’s work survives in the many magazines, books, and television shows now devoted to food, as well as in the realization that taste, culture, and the diversity of America are all vividly reflected in what we eat. Paddleford didn’t just discover that. She embraced it, weaving stories with a voice that doctors once feared would never speak again. Its influence has been heard, and has helped nourish people, all over the world.