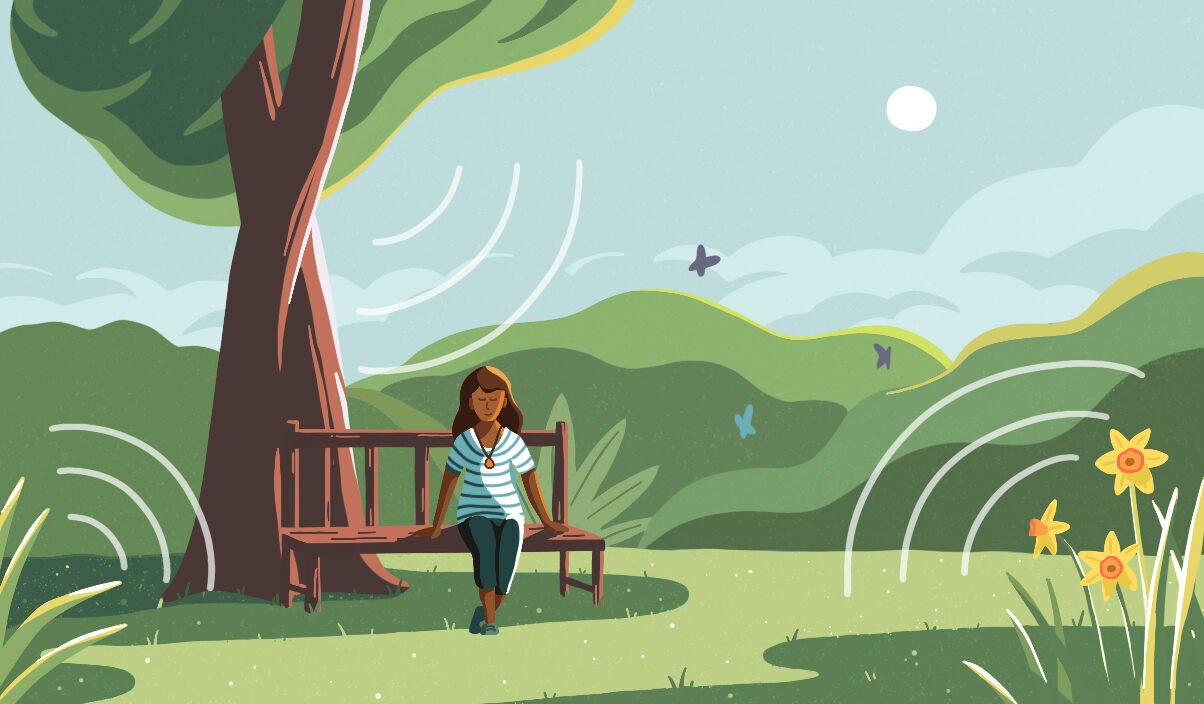 Sounds bounce off surfaces—and you can practice listening to them. All illustrations by Kristen Boydstun.

Daniel Kish navigates the world like a bat does—and he does so without ever leaving the ground.

After losing his vision as an infant, Kish taught himself to move around with the help of echolocation. Like bats, Kish uses his mouth to produce a series of short, crisp clicking sounds, and then listens to how those sounds bounce off the surrounding landscape. (Our winged neighbors tend to emit these clicks at frequencies humans can’t hear, but Kish’s clicks are perfectly audible to human ears.) From there, Kish makes a mental map of his environment, considering everything from broad contours—like walls and doors—down to textural details.

Kish now teaches echolocation, mostly to students who are blind. For these students, Kish believes that an echolocation practice can buoy confidence and independence. Kish’s own experience is persuasive—he famously bikes along hilly, car-lined streets—and a growing body of scholarly research has begun to unpack exactly how expert echolocaters do their thing. This research has also backed up the idea that this skill is highly learnable. When researchers at the University of California, Berkeley, asked novice echolocators to use tongue clicks to determine which of the two objects in front of them was larger, the newbies were soon able to do so in a way that the scientists couldn’t attribute to chance.

Whatever your sightedness, there’s something to be said for learning to listen more attentively to sonic scenery. Kish believes that vision has a way of blunting the other senses unless people work to really flex them. Deft echolocators, he says, are able to perceive fine differences—distinguishing, say, between an oleander bush (“a million sharp returns”) and an evergreen (“wisps closely packed together, which sound like a bit like a sponge or a curtain”). They’re discovering sonic wonder wherever they go. We asked Kish to tailor a lesson for first-timers just learning to listen to the landscape.

Before you begin producing your own sounds, just practice noticing the ways that sounds change around you. Try this exercise next time you’re in a car (assuming you’re not in the driver’s seat).

Crack open the window and close your eyes. This is a good chance to pass through a varied landscape pretty quickly, and begin to differentiate between sounds. “On a residential street, you should hear the sound of the car jump in and out as you pass other parked cars, possibly trees, posts, mailboxes, or houses near the curb,” Kish says. “Everything we pass reflects the sound of our car differently.” Prime yourself to pay attention to incidental soundtracks.

If you are a sighted person, you’ll want a blindfold. “It’s very, very difficult to discern these kinds of subtleties if your eyes are working at the same time,” Kish says. Occluding one sense gives the less-dominant ones room to stretch their legs.

Now is also a good time to stock up on what you’ll need for your practice sessions. First, you’ll need a metal tray or a bowl, so make sure you’ve got one on hand. Once you start moving through space later on, it will also help to have a trekking pole or a cane, or at least a partner you trust to shout if you wander too far off base. 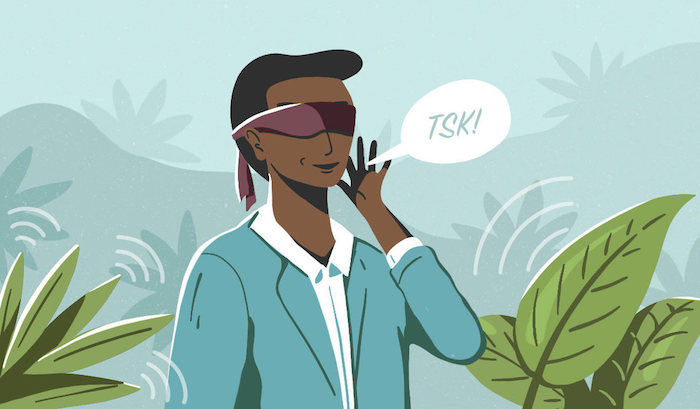 For beginners, the best clicks are ones that you can make cleanly and reliably.

Expert echolocators like Kish can get a bit fancier with their choices, and try to hear the character of a room. Tin decor, buttresses, or other accoutrements that might make a realtor swoon will also give Kish reason to perk up his ears. “It will sound more alive,” he says. “It will sing to you.”

For beginners, picking the right place is a bit of a Goldilocks situation: You don’t want a flat field, where there’s nothing for sound to bounce off. Then again, you ought to steer clear of spots where your hearing will be impeded by, say, a sea of carpet. “Probably the best is a fairly quiet, open space without a lot of clutter, maybe a non-reverberant room,” Kish says.

Clicks are not created equal, and some of them will work against you. “The most commonly produced rubbish click is a ‘cluck,’” Kish says. A cluck sounds something like two clicks on top of each other, which masks the returning sound. A good click can’t be sloppy, and it must be possible to reliably reproduce.

For beginners, Kish says that a dental click fits the bill (this is a tsk-tsk sound, Kish says, “like you’re disappointed”). Another contender is the sound you might use to prompt a horse to giddy-up; a “ch” sound, as in “check” or “church,” is another option.

The key is finding the option that’s comfortable for you. “You settle on whatever click you can do, and stick to it,” Kish says. 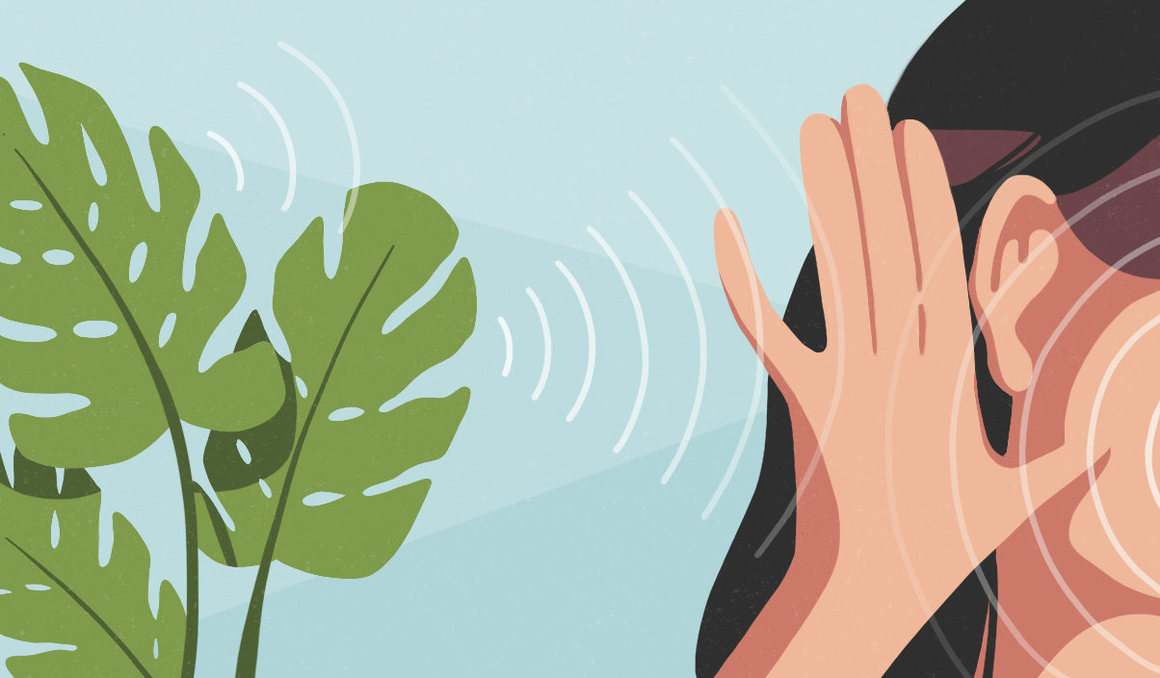 The goal with clicking is to take stock of three things. The first is presence/absence (is something there?). Then, the location (what direction is it in?). Finally, distance (how far away is it?).

To teach these skills, Kish often starts with this exercise: Students pair up with a partner who holds a bowl or flat paddle somewhere above their head. The student clicks, turns their head, and tries to gauge where the bowl is—straight ahead, or off to the side?

Kish doesn’t click all the time—only when he needs to refresh the mental map he’s working from. For beginning students, though, it’s helpful to practice the physical mechanics of clicking, in order to learn how to listen to bouncing sounds.

The next step is to do all of this while in motion. Walk along a hallway and try to listen for differences in sounds that might indicate corners or open doors.

At first, you’ll shuffle and fumble through this exercise, and it’s bound to be frustrating. Go ahead and ask your partner whether or not you’re on the right track—but, if you’re using a blindfold, keep it on. “The temptation is very strong to pop the blindfold off and on,” Kish says. “I resist that because there is an adaptation process that has to happen here. You disrupt it entirely when you pull off the blindfold. I wouldn’t use vision to spot-check an experience; I would try to avoid that.”

7) Stop When You Need To

Moving through the world in a new way can be both thrilling and thoroughly disorienting. Kish has found that people who are sighted, and are unaccustomed to not being able to rely on their vision, need to take breaks every 30-45 minutes. His blind students, for whom non-visual navigation is routine, can hang in longer.

Echolocation takes patience and practice. Kish cautions that it’s hard to get good at this—it took him years. But trying it out can open your ears to the world.