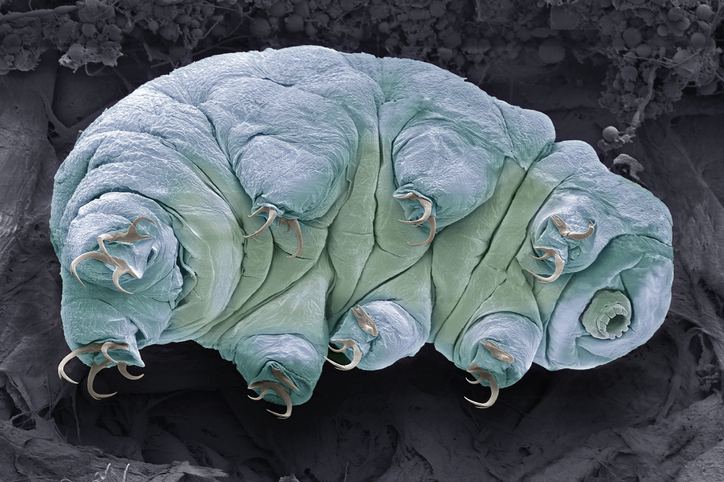 On 11 April 2019, a spacecraft crashed on to the Moon. The Israeli Beresheet probe was supposed to land gently in the Mare Serenitatis, a huge plain of basalt rock formed in a volcanic eruption billions of years ago. It would have been the first privately funded mission to land on the Moon. But owing to a last-minute instrument failure Beresheet did not slow down enough and slammed into the surface at 500 kilometres per hour.

From the Moon’s point of view, this was a failed alien invasion. Beresheet was carrying animals called tardigrades, which look like stunted, microscopic caterpillars. They may not seem like an obvious candidate for interplanetary travel, but tardigrades are famed among biologists for their ability to survive conditions that would kill almost any other animal. It is possible that some of them survived the crash.

Don’t worry, we haven’t seeded the Moon with new life. The tardigrades were sent out in an inactive state, and that is how they will stay: they cannot become active again without water, something the Moon is notoriously short of. Eventually the extremes of temperature and searing solar radiation will kill them all – but it may take a surprisingly long time.

How did tardigrades become so resilient that they can survive being transported through space, and possibly endure even a high-speed lunar crash? What is their secret, and could we ever use it ourselves? Perhaps most profoundly, why did they evolve to be so tough when most animals didn’t?

Tardigrades are not hard to find. Go outside on a damp day and find a patch of wet moss or lichen. If you have a microscope handy you may well be able to find tardigrades puttering around in the water. They look like a cross between a woodlouse and a caterpillar, shrunken to microscopic size.

Despite their size, we have known about tardigrades for a long time. They were first described by the German naturalist Johann August Ephraim Goeze in 1773. He called them “little water bears”, because of the way they walked. The name tardigrade (which translates roughly as “slow stepper”) was bestowed on them a few years later by the Italian priest-turned-biologist Lazzaro Spallanzani in his book Opuscoli di Fisica animale e vegetabile (“Booklet of Animal and Vegetable Physics”).

Despite their tiny size they are complex animals. “They’re built of maybe 1,000 cells, but they’re just as complex as a cockroach or a fruit fly,” says Nadja Møbjerg at the University of Copenhagen in Denmark. That includes mouthparts for puncturing algal cells and other food sources.

Tardigrades also have very variable reproductive strategies, says Lorena Rebecchi of the University of Modena and Reggio Emilia in Italy. While some have males and females, others are hermaphrodites, while still others reproduce by parthenogenesis or “virgin birth”.

However, none of these details is as famous as tardigrades’ extraordinary resilience. Thomas Boothby at the University of Wyoming in Laramie lists the threats they can endure: “They can survive being dried out. They can survive being frozen down to about a degree above absolute zero, which is the temperature at which all molecular motion stops. In their dry state they can be heated up well past the boiling point of water. They can survive thousands of times as much radiation as we can. And they’re the only animal we know of that can survive prolonged exposure to the vacuum of outer space.”

The basic story of tardigrades’ survival has been clear ever since Spallanzani studied them. He encountered them when he took sediment from a gutter and added water to it. What had previously looked like a bunch of lifeless grains became vigorously swimming tardigrades.

When Spallanzani’s tardigrades dried out, they shrivelled up, shrinking to about a third their normal size. They stopped moving, stopped breathing, stopped doing pretty much everything. They became tiny immobile lumps. Scientists call this their “tun” state. Tardigrades can stay in tun for years, only to revive when they encounter water again.

The tun state challenges the popular idea that there is a hard line between life and death. A tardigrade in tun is not doing any of the things we associate with being alive, but it is not dead either.

This can sometimes be misinterpreted, says James Fleming of the University of Oslo Natural History Museum in Norway. “Something that has been bandied around a lot in popular media is the idea tardigrades can live for hundreds of years,” he says. In reality, tardigrades only have a few weeks of active life. The interval between when a tardigrade is born and when it dies might be very long, but only if it spends most of that time in this “super-hibernation” to escape an environmental threat. “Really it’s best to think of it as a lifespan of a few weeks, but not necessarily consecutive,” says Fleming.

Entering the inactive tun state clearly offers a way for tardigrades to survive. If conditions become too dry, too cold or too radioactive, they can shrivel into a tun and wait it out. But most animals cannot do anything of the sort. Even if we humans could survive losing most of the water from our bodies – which we absolutely cannot – we would still die: DNA and other key molecules in our cells would become damaged, so when we rehydrated we would find that nothing in our bodies worked.

Something must be happening inside tardigrades’ bodies to preserve them in the tun state.

In the late 20th century, the American biologist John Crowe and the Danish researcher Hans Ramløv both homed in on one key molecule: a sugar called trehalose. In tardigrades, and other animals that can survive being dried out such as nematode worms, trehalose often accumulates as the water leaves their bodies, and it is destroyed when they rehydrate.

“Trehalose is an important molecule,” says Rebecchi. In particular it seems to be good at preserving the outer membranes of cells, which might otherwise be ruptured as they dry out, or if the animal becomes so cold that ice crystals form inside it.

“At high levels, trehalose forms these super-viscous environments that kind of slow everything down,” says Boothby. “While damage might still accumulate, it will only do so slowly – so provided the tardigrade does not have to stay in tun too long, it should be OK.”

Boothby adds that tardigrades also use other “mechanisms of stress tolerance”. In 2017 his team showed that some tardigrades make unusual proteins, which preserve the innards of their cells. “They start filling up the cells of the tardigrade,” says Boothby. “You can think of that as like turning the inside of a cell from water into honey.” Eventually the cells start to resemble glass.

This ability depends on the three-dimensional structure of the proteins. All proteins are long molecules like chains, which are twisted into pretzel shapes. Most proteins have a handful of preferred shapes that their chains like to fold into, but the tardigrade proteins do not have preferred shapes and instead just flop around seemingly at random. Only these “intrinsically disordered proteins” can form the glass-like substance.

“It slows down all these biological processes that are going on inside the cell,” continues Boothby. That includes slowing down damage. For instance, most proteins do need to be the correct shape to work. Being surrounded by water helps them to do that. “If water is removed from the system, most proteins unfold and break,” he says. “By creating this super-viscous environment inside the cells, these tardigrade disordered proteins actually slow down processes like well-folded proteins unfolding and breaking.”

Intrinsically disordered proteins from tardigrades are so good at protecting biological material, we might find them useful for storing medicines such as vaccines. One bottleneck in the fight against Covid-19 is that many of the vaccines need to be kept cold. But it should be possible to preserve them at room temperature using intrinsically disordered proteins. “We are actively working on that,” says Boothby. He explains that the proteins have evolved to protect tardigrade cells, not vaccines, so his team is making small tweaks to optimise them for this new purpose. “We have patents out on these things and have some partnerships,” he says. “If all goes well, hopefully we will see this technology out soon.”

Even intrinsically disordered proteins are not the whole story. There is also a protein called damage suppressor (Dsup), which was identified in 2016 by Takekazu Kunieda of the University of Tokyo and his colleagues. Dsup binds to DNA in the cell, protecting it from damaging chemicals.

Last year, Galas’s team published a study of tardigrades in the tun state which revealed that structures resembling the ramparts of a castle form outside their cells. “This species can synthesise a specific structure that surrounds every cell of the tardigrade, that can protect the tardigrade for desiccation, but only desiccation,” says Galas.

There is more to come, predicts Boothby. “There are almost certainly a myriad other mechanisms and tricks that these organisms are using to protect themselves,” he says. Intrinsically disordered proteins seem to be good at protecting other proteins, and Dsup protects DNA, but there are many other substances and structures inside tardigrade bodies that must be preserved.

Indeed, some of tardigrades’ abilities remain almost entirely mysterious. For example, in 2020 researchers found a new species that can resist intense doses of ultraviolet radiation. It seems to do this by fluorescing, but it’s not clear what the fluorescent substance is or how it works. If it can be identified, the team suggest it could form the basis of a new kind of sunscreen.

Studies such as these point the way to an explanation for how tardigrades are so resilient, but they don’t tell us why. If such resilience is possible, why is it only these peculiar little animals that have it? The answer may lie in tardigrades’ evolutionary history.

Researchers think they have the basics of the story. Like the other major animal groups, tardigrades originated in the sea. Millions of years later, along with other groups such as insects, they began venturing on to land. But there they encountered a problem: becoming dried out.

Other land animals such as reptiles evolved waterproof skin so that they did not easily lose their body water, but tardigrades never did. “They don’t have a skin that allows them to hold on to their water when they go on land,” says Møbjerg. Instead they evolved the tun state, a way to become dormant when conditions become difficult.

On this view, tardigrades first evolved resilience to desiccation to survive on dry land. Their strategy was to enter a dormant state with their cells and organs packaged away by protective chemicals. This inadvertently also made them resilient to other stressors including cold and radiation, because temporarily halting all biological processes works just as well for those situations too.

If this is correct, tardigrades’ near-invincibility is a kind of accident. An accident that worked so well that they can even preserve themselves in outer space.