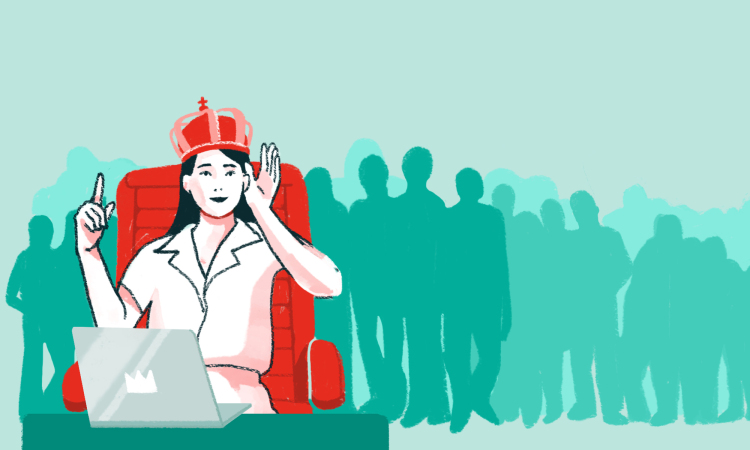 Who would you rather work for: a narcissistic leader or a humble leader?

The answer is more complicated than you think.

In a Fortune 100 company, researchers studied whether customer service employees were more productive under narcissistic or humble leaders. The least effective bosses were narcissists — their employees were more likely to spend time surfing the Internet and taking long breaks. Employees with humble bosses were a bit more productive: they fielded more customer service calls and took fewer breaks. But the best leaders weren’t humble or narcissistic.

They were humble narcissists.

How can you be narcissistic and humble at the same time? The two qualities sound like opposites, but they can go hand in hand. Narcissists believe they’re special and superior; humble leaders know they’re fallible and flawed. Humble narcissists bring the best of both worlds: they have bold visions, but they’re also willing to acknowledge their weaknesses and learn from their mistakes.

Humble narcissists have grand ambitions, but they don’t feel entitled to them. They don’t deny their weaknesses; they work to overcome them.

Humble narcissists don’t just have more productive employees — they’re rated as more effective too. It’s not just true in the US: new research also shows that humble narcissists make the best leaders in China. They’re more charismatic, and their companies are more likely to innovate.

Narcissism gives you the confidence to believe you can achieve great things. It’s hard to imagine someone other than Steve Jobs having the grandiose vision of creating Apple. And we’re all drawn to that confidence — it’s why narcissists are more likely to rise up the ranks of the corporate elite and get elected to political office. But alone, narcissism is dangerous. Studies show that tech companies with narcissistic CEOs have more fluctuating, volatile performance. Narcissists tend to be overconfident. They’re prone to dismissing criticism and falling victim to flattery. They surround themselves with yes-men and take unnecessary risks. Also, narcissistic presidents are more likely to engage in unethical behavior and get impeached (hello, Richard Nixon and Bill Clinton).

Adding humility prevents capriciousness and complacency. It helps you remember that you’re human. Humble narcissists have grand ambitions, but they don’t feel entitled to them. They don’t deny their weaknesses; they work to overcome them.

As an organizational psychologist, I study leaders and teams, and I’ve been struck that there are three kinds of humility that matter.

We’ll actually seem more credible and trustworthy — and other people will see more potential in our ideas — if we have the humility to acknowledge the limitations.

The first kind of humility is humility about your ideas. Take Rufus Griscom (TED Talk, given with Alisa Volkman: Let’s talk parenting taboos). When he founded the parenting blog Babble, he did something I’ve never seen an entrepreneur do. He said, “Here are the three reasons you should not invest in my company” — and he walked away with $3.1 million in funding that year. Two years later, he went to pitch Babble to Disney, and he included a slide in his pitch deck that read, “Here are the five reasons you should not buy Babble.” Disney acquired it for $40 million.

By speaking candidly about the downsides of his idea, Rufus made his comments about the upsides more credible. Admitting the flaws outright also made it tougher for investors to come up with their own objections. The harder they had to work to identify what was wrong with the company, the more they thought was right with the company. The conversation changed: his investors proposed solutions to the problems.

If you ever took a debate class, you were taught to identify the weaknesses in your argument and address them out loud. But we forget to do this when we pitch our ideas: we worry that they’re fragile and we don’t want to shoot ourselves in the foot. We overlook the fact that we’ll actually seem more credible and trustworthy — and other people will see more potential in our ideas — if we have the humility to acknowledge their limitations.

Of course, it seems like there are times when this won’t work, like at a job interview. But actually, people are about 30 percent more interested in hiring candidates who answer the question about their greatest weakness honestly, instead of pulling a Michael Scott: “I have weaknesses. I work too hard, and I care too much.” But you might not want to go as far as George Costanza: “I’m unemployed and I live with my parents.”

Employees who seek negative feedback get better performance reviews. They signal that want to learn, and they put themselves in a stronger position to learn.

The second kind of humility is performance humility. It means admitting that we fall short of our goals, we make mistakes, sometimes we even fall flat on our faces. Scientist Melanie Stefan has pointed out that our bios and résumés only highlight only our accomplishments — we scrub out all the stumbles and struggles along the way. In response, a Princeton professor made a failure résumé: a list of all the degree programs that rejected him, all the journals that turned him down, and all the fellowships and awards that he didn’t win. (He has since lamented that it’s gotten more attention than all his academic work combined.)

You might not want to put your failures out there that openly. But every leader can take steps toward showing performance humility. At Facebook, marketing VP Carolyn Everson decided to take her own performance review from her boss and post it in an internal Facebook group for her team — 2,400 people — to read.

Carolyn wanted to signal to them that she isn’t perfect; she’s a work in progress. She figured that if she let people know where she was working to improve, they’d give her better feedback. What she didn’t expect is that her humility would be contagious: other managers started doing it, too, recognizing that it would help to strengthen a culture of learning and development.

That can be true across the hierarchy — not just in leadership, but at the entry level. The evidence is clear: employees who seek negative feedback get better performance reviews. They signal that want to learn, and they put themselves in a stronger position to learn.

The moment you get excited about a new background, skill set or base of experience is the moment you have to diversify again, and this requires real humility.

The third kind of humility is cultural humility. In many workplaces, there’s a strong focus on hiring people who fit the culture. In Silicon Valley, startups that prize culture fit are significantly less likely to fail and significantly more likely to go public. But post-IPO, they grow at slower rates than firms that hire on skills or potential.

Hiring on culture fit reflects a lack of humility. It suggests that culture is already perfect — all we need to do is bring in people who will perpetuate it. Sociologists find that when we prize culture fit, we end up hiring people who are similar to us. That weeds out diversity of thought and background, and it’s a surefire recipe for groupthink.

Cultural humility is about recognizing that your culture always has room for growth, just like we do. When Larry Page returned as the CEO of Google, he told me that he didn’t want it to become a cultural museum. Great cultures don’t stand still; they evolve.

At the innovative design firm IDEO, instead of cultural fit, they emphasize cultural contribution, a term coined by Diego Rodriguez. The goal isn’t to find and promote people who clone the culture; it’s having the humility to bring in people who will stretch and enrich the culture by adding elements that are absent. That’s something every organization needs to revisit every year, because what’s missing from the culture changes over time.

After IDEO designed the mouse for Apple, they started working on a wider range of projects — from bringing Sesame Street into the digital age to reimagining shopping carts for grocery stores. They realized that while they had great designers, they were short on people who were skilled at going into foreign environments and making sense of them. That’s what anthropologists do for a living, so they created a new job title: anthropologist.

As they saw the contributions from people in that role, it was tempting for them to just keep hiring anthropologists. But that would be the culture fit trap again. Cultural humility forces you to ask what else is missing. In IDEO’s case, they realized it was storytellers: people gifted in translating new insights back to designers and clients. So they started hiring screenwriters and journalists. The moment you get excited about a new background, a new skill set or a new base of experience is the moment you have to diversify again, and this requires real humility.

If you work with a narcissist, don’t try to lower their confidence. Just temper it with humility.

Even if you don’t start your career as a narcissist, success can go to your head. Maintaining humility requires you to surround yourself with people who keep you honest, who tell you the truth you may not want to hear but need to hear, and who hold you accountable if you don’t listen to them.

I think that’s what happened to Steve Jobs at Apple. He had the grand ambition to build a great company. But after the launch of the Mac was a flop in 1985, he refused to listen to his critics about what needed to change, and he was forced out of his own company.

I’ve heard from his close collaborators that the Steve Jobs who came back to Apple in 1997 was more humble. Reflecting on the revitalization of the company, he once said, “I’m pretty sure none of this would have happened if I hadn’t been fired from Apple. It was awful-tasting medicine, but I guess the patient needed it.”

That’s what a humble narcissist sounds like:. “I believe I can do extraordinary things, but I always have something to learn.”

So if you work with a narcissist, don’t try to lower their confidence. Just temper it with humility. Don’t tell them they’re not great. Instead, remind them that they’re human, they haven’t succeeded alone, and what sets the best apart is that they’re always striving to get better.

Find out more about humility by listening to Episode 3 of WorkLife with AdamGrant, a TED podcast. It explores whether humility is a hidden ingredient in success, and it features author Michael Lewis, a “no-stats all-star,” and the great coach of an unusually humble college basketball team that keeps beating the odds.

Adam Grant is an expert on how we can find motivation and meaning, and lead more generous and creative lives. As a popular TED speaker and the New York Times bestselling author of three books that have sold over a million copies, he has helped Google, the NBA, and the U.S. Army improve life at work. Grant has been Wharton’s top-rated professor for six straight years, and he has been recognized as one of Fortune’s 40 under 40 and the world’s 10 most influential management thinkers. He’s a former magician and junior Olympic springboard diver.