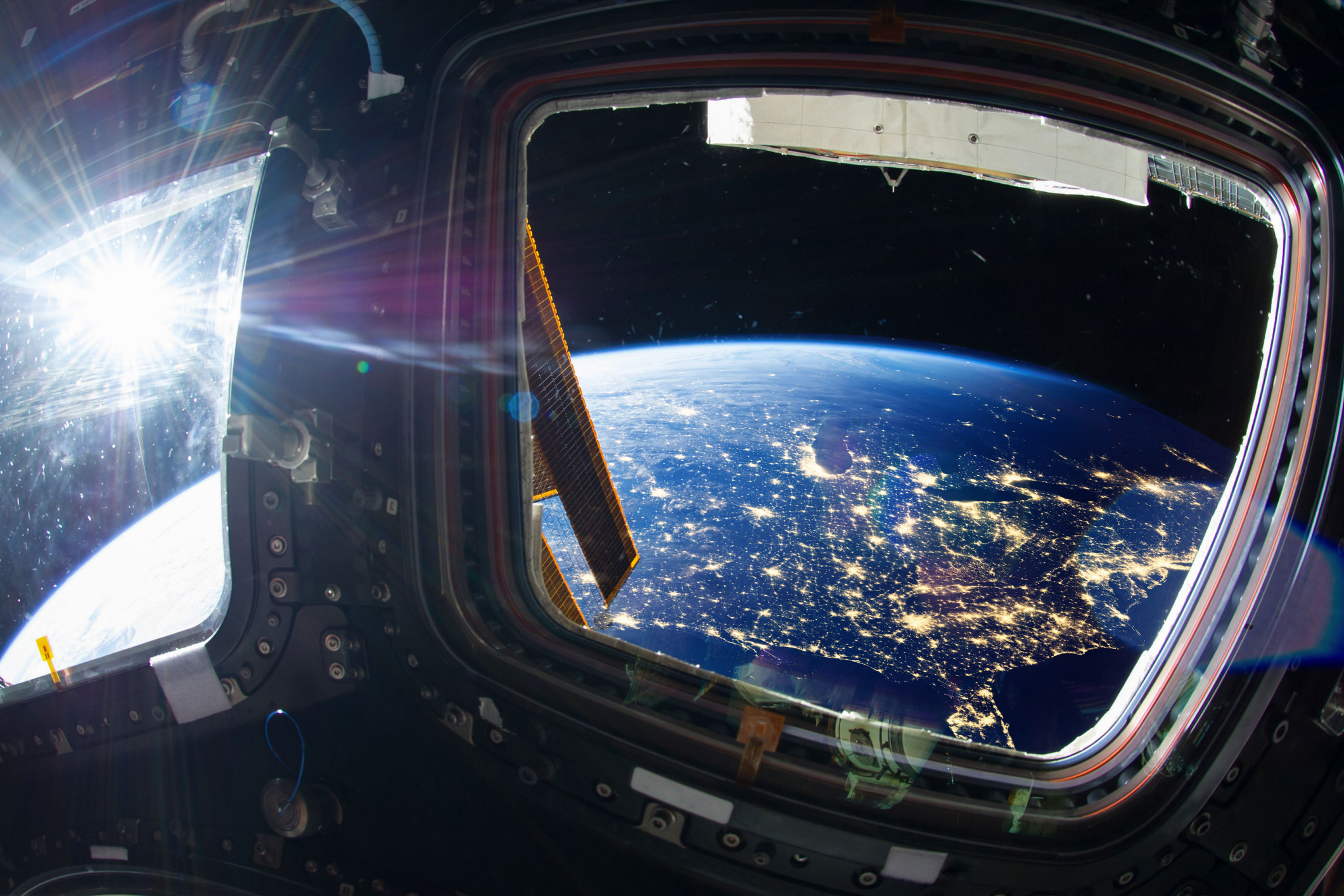 There’s no squinting in space. Things appear small, sure. From your vantage point, 254 miles above Earth, even the colossal Kapok trees of the Amazon are reduced to a verdant swirl in a cat-eye marble. But in space, as six NASA astronauts tell Inverse, what you see isn’t necessarily what you envision. Up there, where perspective is immeasurably wide, it’s impossible to miss the forest for the trees.

The astronauts — Chris Hadfield, Jerry Linenger, Nicole Stott, Mae Jemison, Leland Melvin, and Mike Massimino — have all had the rare opportunity to view our home planet from space. In doing so, all of them went through a change, not only in how they saw the planet but in their relationship to it. Some refer to that change as the “ Overview Effect,” a term coined in 1987 by celebrated space writer Frank White to describe the mental shift astronauts experience when they consider the Earth as part of a larger whole.

The 2018 National Geographic series One Strange Rock, executive produced by Darren Aronofsky and Jane Root of Nutopia, aims to recreate the Overview Effect for everybody else by showing, as best it can, the views that prompted those shifts.

In a series of one-on-one conversations with the astronauts, Inverse asked what exactly each of them saw the moment that everything changed.

It sneaks up on you, because you’re busy and you’re doing stuff. Your emotions almost end up somewhere behind you, because things are happening so fast. One of the reasons we take so many pictures is we don’t have time to see what we’re looking at. And you know if you don’t somehow record this right now, you’re going to miss it, and hopefully you’ll have time later to look at it.

So, sometimes when you’re looking back at something you did, you realize what just happened. It was when I took a picture, actually, of Karachi, Pakistan, and I read what I wrote about it the next day, which was: “There are 6 million of us living in Pakistan.” And I realized that that part of the world had become us for me.

Six million of us? When is that no longer “them?” How did that part of the world, which I’ve never even been to, now, suddenly, because of the cumulative effect of where I am, start to feel like us? I think that’s when the world became one place for me.

You go through the launch and it’s just chaos — it’s just power. You think, “Wow, mankind built this thing — it’s incredible! This thing’s getting me to 17,500 miles an hour.” All that part is incredible. So you catch up with everything; you do all the things your brain has to do: switches, make sure everything’s correct, make sure the spacecraft’s working.

But it’s when you have that reflective moment, when you just float over the top of a window. In my five months on the Russian Space Station, I had some opportunities where, for 90 minutes, I would just levitate over a window, and I’d see the sun rise, the sun set, the stars come out, and I’d just sort of block the world out. I blocked out science, to some degree. I said: I’m not going to identify the Big Dipper. There’s so much stuff out there; it’s a feeble effort by man to try and put labels on all this stuff.

You just have this incredible view of the universe, of Earth, and a little reflection of yourself as a human being, telling yourself, “Wow, I’m in space. What mankind just accomplished is incredible.”

All I know is I was stunned in a way that was completely unexpected. It was overwhelmingly impressive — beyond anything I’d heard from my colleagues who’ve flown before. We just can’t describe it, you know? When you go to different places here on Earth and experience things that you never thought you would before, it’s difficult to describe it. I think with a lot of those things, you’re seeing it, but you’re feeling it, too. You feel like it’s just getting in you.

The planet just glows. I remember trying to describe to my son, who was seven at the time, what it was looking like to me. I’m like, “Okay, the simplest way I can think is just, take a lightbulb — the brightest lightbulb that you could ever possibly imagine — and just paint it all the colors that you know Earth to be, and turn it on, and be blinded by it.” Because day, night, sunrise, sunset, it is just glowing in all of those colors.

I didn’t expect that. I expected it to be really, really pretty, but I didn’t expect to feel like you could almost reach into it. You immediately cannot deny that it’s a planet. That you live on a planet.

I do remember initially looking out the window the first couple of days and wanting to see my home, wanting to see Florida from space. Finally, we were flying over Florida. I wanted to fly to the window and see it, and then realized somewhere down the line that I wasn’t looking at Florida that same way anymore. I still wanted to see Florida, but Florida had just become this special part of home, which is Earth. I don’t know when that happened. Was that two days after I got there? I mean, it wasn’t like one day I woke up and was like, “Oh yeah, Earth’s my home.”

It’s a feeling of interconnectivity that you sometimes just don’t get when you’re in the middle of something. I think separating ourselves from things that are important to us is good because you then appreciate it in a new way. That definitely happened for me with Earth.

One of the things that’s really interesting is that you respond to what you took up with you. I didn’t have any, “ Aha, everything that belongs to me in life is down here on Earth.” Mine was quite different. Mine was about connecting with the rest of the universe. I never grew up thinking that this was the end-all, be-all. I never thought of boundaries and borders. I always knew they were human-made — that we put them there; they had no relationship to anything. I knew that the clouds carry water over different parts of the world. That wasn’t a big whoop for me.

I tried to make myself afraid. I thought that I would be nervous being up there, but I was just so mellow and cool. I’d done a couple of things: I was exactly where I wanted to be, I’d made my peace with everybody if something happened, so I was very cool and in the moment. But I was like, “This is just feeling a little too good, right?”

I imagined that on the other side of this hatch is an atmosphere and environment that doesn’t support my life form. But I couldn’t make myself nervous. And I tried to imagine myself being on another star system 10,000 light-years away, and I felt fine. I thought it would be important that I was there with a bunch of people, but I was like, “I would have loved to have been up there by myself in a big glass bubble with my cat.”

Because I felt that connected. For me, it wasn’t a connection back down to Earth. It was a connection with the rest of the universe.

For me, it was about outward versus inward. But I think it depends on who you are when you go up.

Actually, it really happened after we installed the laboratory. Peggy Whitson, who is one of my colleagues on the show, she invited us over to the Russian segment to break bread; basically, to have a meal. And she said, “You guys bring the rehydrated vegetables, we’ll have the meat.”

So, we came over with this bag of vegetables, and we’re floating there, having this meal with people we used to fight against. Russians and Germans are on this mission. It’s almost a Benetton commercial. African-American, Asian-American, French, German, Russian, the first female commander, breaking bread at 17,500 miles per hour, all doing this while listening to Sade’s “Smooth Operator.”

I look out the window, and I see the planet again. We’re going around it so fast and we’re coming over Virginia. I look down and I’m thinking, “My parents are probably having a meal.” Five minutes later, we’re over Paris, where Léo’s from, our French long-duration astronaut. And then Yuri, from Russia, can look over to the side and see his home.

And so, in this one little moment in time, we’re looking at our respective homes, breaking bread, and celebrating like we are in space. And that’s when this shift happened, because I saw so much of the planet in 90 minutes. I saw all these different things happening. And that’s when I think I really got my over-perspective. I thought it would be when I did this task of installing the Columbus laboratory, but that paled in comparison to the human piece of us sharing and breaking bread and seeing the planet in that way. Our respective homes, up in space.

It happened during a space walk. At Hubble, we were 100 miles higher than the station, so we could see the curve of the planet from up there. The view is really cool.

If we were in a spaceship now, in this room — say we had windows — we’d see 57th Street. Then, whoop, we blast off into space. And now, through that same window, you see something different. You’re floating around; you’re seeing the Earth. Ah, that’s pretty cool. But you’re still inside.

When you go out, you’re in the backyard, and everything opens up to you. You can see differently. For me, it definitely changed the way I think about things. I really think our planet is a paradise.

I was at the Explorers Club Dinner. Jim Lovell, Apollo 13 guy — I had a conversation with during the day. He said, in his acceptance speech, something to the effect of: He knows what heaven is like because he was born there. Here.

This is a paradise that we live in, I think. I do think of this place as heaven-like.

I think this is a wonderful place to be, but I think seeing it from space, the beauty of it, that was my feeling. This is what heaven must look like, and I can’t imagine anything more beautiful than our planet from space.

Yasmin Tayag is a writer and former biologist living in New York. A Toronto girl at heart, her writing also appears in The Last Magazine and SciArt in America. You might recognize her as a past host of Scientific American's YouTube series.