On one February afternoon, in the muffled quiet of a medieval chamber, Alan Kingshott threads his five-foot-eight-inch frame between the cluttered desks. He’s solidly built, and at 64, still twitchy with energy. Here, behind a heavy oak door, away from the buzz of eager tourists, Kingshott is content to let his guard down.

“I can’t stand history, hate it with vengeance,” he confesses in a deep, velvet voice. It’s an unexpected grouse from a man sporting a dark blue and scarlet Tudor uniform and a Beefeater’s cloche hat.

For decades, the Chief Yeoman Warder, lead Beefeater at the Tower of London, has captivated thousands with fiery tales of this legendary fortress by the River Thames. “I’m a storyteller, not an historian,” Kingshott says lifting a straggly brow and offering up his best Cheshire cat grin. “Maybe even a bit of an actor.” 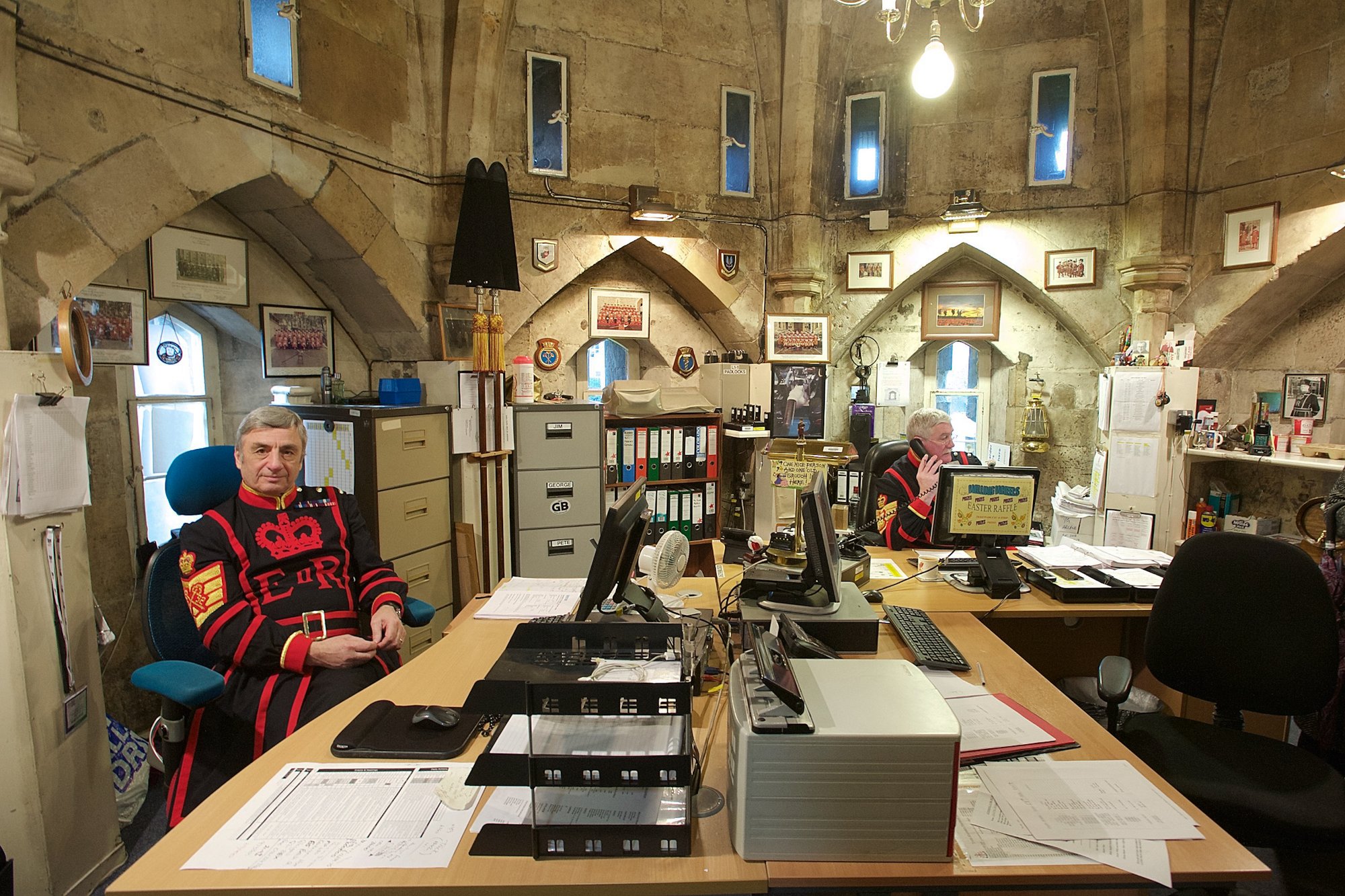 Designed as a castle for William the Conqueror in 1078, the Tower of London is more intimidating fortress than cozy palace. In the shadowy light of his office rooted on the ground floor of the fortress Gate House, Kingshott’s gaze sweeps the octagonal room and the paraphernalia of his job – a cluster of old iron keys, ceremonial axes and a glimmering brass lantern. Today, the Chief Yeoman Warder is in retirement mode. He’ll end two decades of life and work in England’s most iconic tourist attraction later this month. But sentimental musing isn’t his style.

“There’s been a huge amount of change in my nineteen years here, and I’d be fibbing if I didn’t admit there were challenges,” he says, smoothing wrinkles from his uniform’s knee-length tunic where “ERII” – a reference to Queen Elizabeth II – and the Royal crown are embroidered in red across the front.

In his time here as Sergeant Warder, Yeoman Gaoler (once head jailer, now a benign managerial job), and, for the last five years, Chief Yeoman Warder, Kingshott has seen an exponential jump in the number of visitors exploring the complex. About 2.8 million people stop in every year. He’s also watched modern life catapult its way into the ancient fortress via CCTV, Google Glass, selfies and drones – last year two drones violated the no-fly zone. “We’ve had to adapt,” Kingshott says solemnly. And in most ways they have, accommodating even the continuous click of cellphone cameras as modernity tugs at Tower traditions. 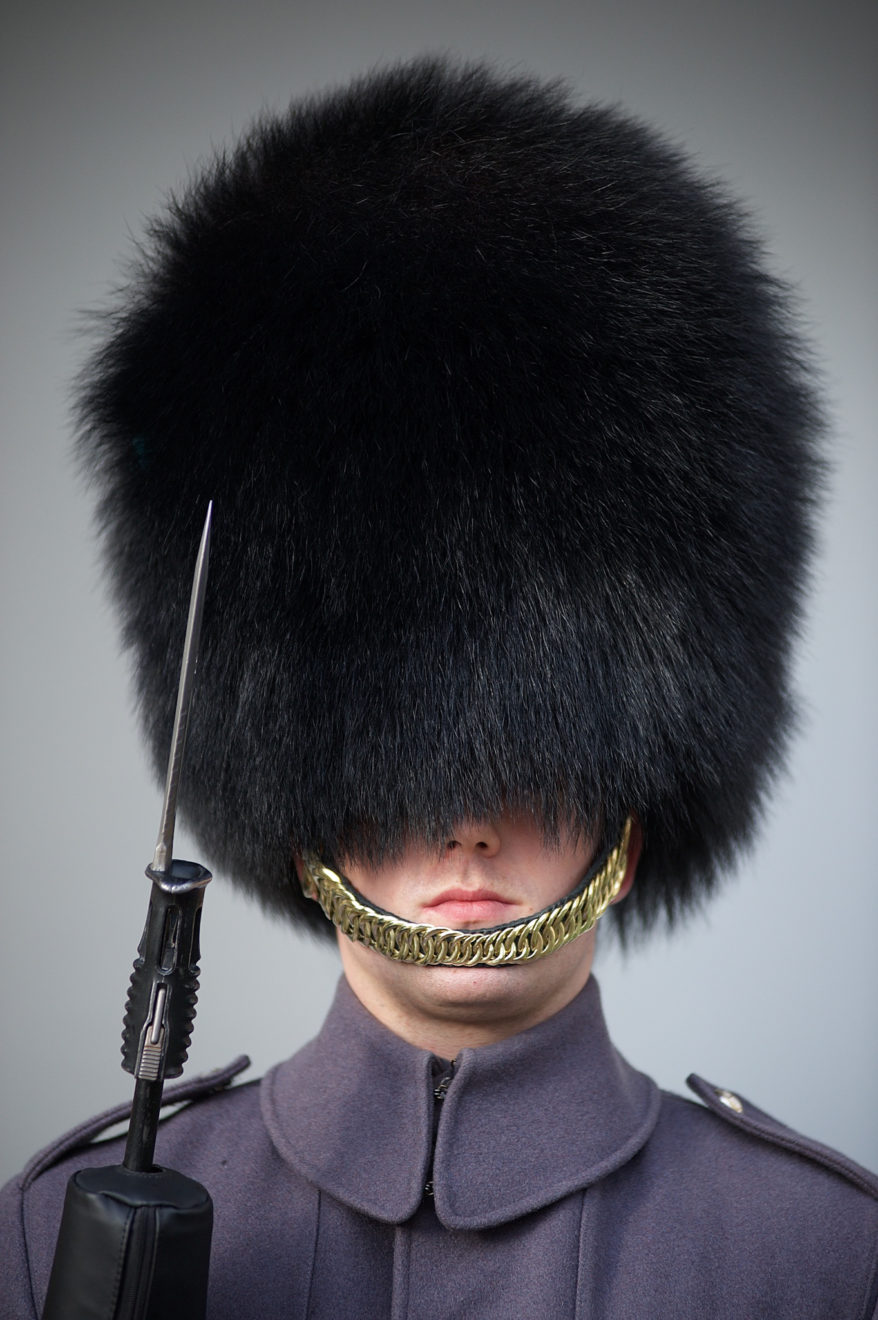 The Beefeaters, whose nickname comes from days when they were partly paid in chunks of beef, spend long, tiring days shepherding waves of tourists around the various attractions within the Tower of London: Traitor’s Gate, the Bloody Tower, the Jewel House. Each hour, warders serve up grisly anecdotes of Britain’s blood-stained history, a chilling smattering of ghosts, murders and beheadings – legend and fact told with a mix of gore and gallows humor. And the tourists love it.

If there’s a tourist favorite among the ranks, it would probably be the Raven Master. His glossy black birds draw the crowds who put them second only to the Crown Jewels as the reason for their visit. Pampered and prized, the ravens are the stuff of legend. The story is that around 1665, a harried Charles II decreed six ravens would always be fed and sheltered in the Tower. Bedevilled by the plague, the King took advice from a soothsayer who predicted that if the birds ever left the Tower, the monarchy would collapse.

If modern life has fast encroached on the ancient fortress, in the ranks of the Beefeaters, history still marches to a slower drumbeat. The second woman to join the all-male corps in its 532-year history took her place in 2017. That’s nine years after the first female recruit stormed the all-male bastion, suffering months of bullying before two of her male colleagues were sacked for harassment.

One reason it’s taken so long for real change to seep into the corps of Beefeaters is that the pool of women and minority candidates hasn’t caught up to determined efforts to attract diverse candidates.

“For most of us the journey here started over 25 years ago. It’s taken time for diversity to break through because the job requires 22 years in military service,” says Yeoman Warder Lawrence Watts, the first black candidate to join the Beefeaters, who was hired in 2016.

When Kingshott became a Beefeater, life in the corps was different. For 25 years he had served as a tank gunner in the Royal Hussars, seeing active duty in places like Northern Ireland and the Middle East. After a brief, dreary career detour to manage an electrical supply store, Kingshott signed on as a Warder in 1998. A balance of charisma and stalwart respect for tradition helped Kingshott rise through the ranks, from Yeoman Warder, to Yeoman Sergeant to Gaoler and finally, in 2012, Chief Yeoman Warder.

“The guys that were on the job when I first got here had a very different view of life and of the job. It was seen as a sort of gentlemen’s retirement club,” he says.

But Tower life today is anything but laid-back. Kingshott rises early in a bedroom that was once a prison cell – the locks still bolt from outside the door – and treads 48 steps down a spiral stone staircase to work. The scene looks staged for a Hollywood swashbuckler with Kingshott decked out in his medieval uniform.

Ceremony infuses his day. Mornings start with a brisk march to the main gate – ancient iron keys in hand and flanked by four regimental guards – where tradition dictates he open the Tower to the public. In his office, Kingshott is deluged with administrative duties, escaping now and then to confer with colleagues around the complex. But it’s evening and the Ceremony of the Keys that he cherishes most is about to begin.

At precisely 9:53 p.m., in a ritual that’s been carried out nightly for around seven hundred years, the Chief Yeoman Warder marches with an escort of Regimental Guards to lock the three Tower gates. For Kingshott, it’s the pomp and tradition that he loves and honors. But it’s the last moments of the ceremony that will stay with him well into retirement: “God preserve Queen Elizabeth,” he shouts, his voice echoing in the dark shadows of the ancient fortress as the Duty Drummer sounds Last Post on a single bugle.

The Beefeater’s job wasn’t always so benign or so honorable. For centuries Warders were mostly jailers, hauling political prisoners, spies and even royalty to forbidding tower cells or worse: Tower Green for execution. They also guarded the Crown Jewels. But with treasures worth some $32 billion at stake, the job is no longer left to “forty guys without weapons,” as Kingshott puts it. The job now falls to the 22-strong Tower Guard and an in-house private security team. The sprawling twelve-acre Tower site is also peppered with nearly one hundred CCTV security cameras.

Today the world likes to cast the Beefeaters as symbols of jolly old England, but Yeoman Warders were once known as infamously corrupt scoundrels who could buy and sell their position for a hefty 250 Guineas – about $100,000 in today’s currency. In 1836, the Duke of Wellington put a stop to the practice, weeding out the worst of the villainous crew.

Thanks to the Duke, Beefeaters must now show 22 years in the British forces, achieve Warrant Officer rank and leave the military with a good conduct medal. Thirty-seven Beefeaters currently work here, with Kingshott overseeing the corps. The job comes with a subsidized apartment in the fortress. With the Yeoman Warders and their families, 120 people in all, living inside the ancient walls, the Tower can sometime feel like a village to its residents.

“There are occasions when we all get together, but we’re not piling out of one house into the next,” Kingshott laughs. “We mostly get enough of each other during the day.”

Outside the Chief Warder’s office, the cobblestone passages bustle with tourists. He nimbly dodges a group gawking at the Ravens strutting across the grounds and heads toward his Gate House apartment. Ravens have been a fixture at the Tower since the 1600’s, when Charles II decreed they be fed and sheltered.

The biggest change? For Kingshott it comes down to money. When he arrived in 1998, the independent charity Historic Royal Palaces (HRP) had just taken over running the Tower from the U.K. government. The charity soon made the tourist mecca a moneymaker, ramping up commercial ventures and funneling cash into upkeep and conservation. Corporate dinners, personal tours – a favorite with celebrities – and private parties alone rake in $3.5 million a year, according to the Tower Events Department.

“Before HRP took over, that was a dingy, dirty mess,” Kingshott says, pointing to the White Tower, the turreted keep famous for its fearsome dungeons. “We would never have had the money for upkeep if funds were still coming from the Department of Environment.”

On the Tower Green, a Beefeater is enthralling tourists with a gruesome account of Anne Boleyn’s beheading, punctuated by the occasional joke.

“It was a quick death, but when her head was lifted from the straw, the blood dripping from her neck, her lips continued to move,” he says dramatically. Then, to laughter of the crowd, hits his punch line: “Isn’t that just like a woman? Always the last word.” 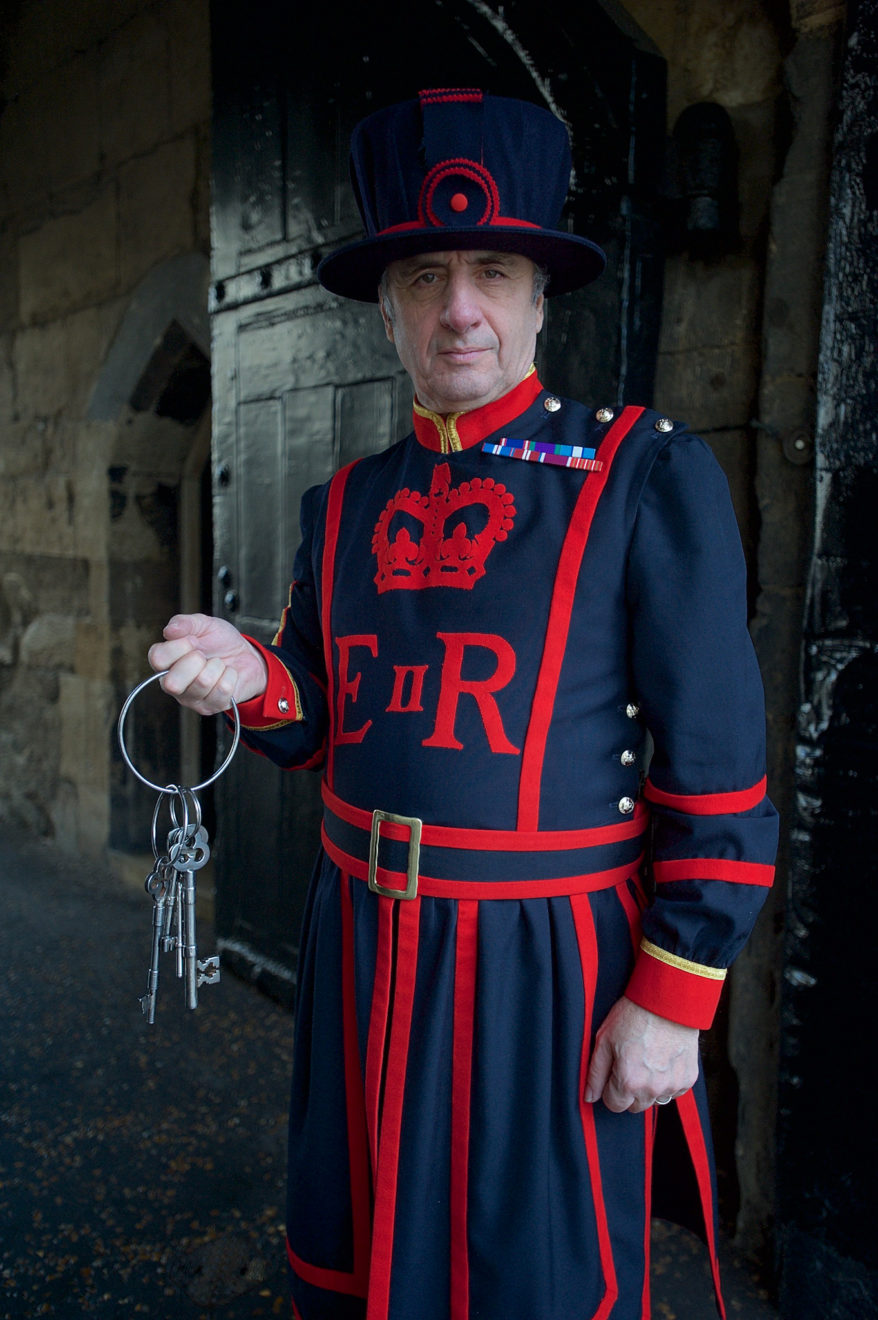 Kingshott holds the ancient keys to the Tower of London.

“I’ll miss the people and I’ll miss making all this accessible and fun,” he says, looking around at the ancient buildings and the tourists who seem to understand that, for all the good-natured bonhomie, this is a cultural landmark and World Heritage site.

With retirement on England’s Sussex coast firmly in mind – ballroom dancing and enjoying his seven grandchildren are high on his to-do list – Kingshott looks forward to a last drink at the Tower’s Beefeaters’ pub.

“May you never die a Yeoman Warder!” is the standard toast, referring to days when Beefeater jobs were bought and sold. If a Warder died before selling on his position, his destitute family would be evicted from the Tower.

“Now it’s just a toast. I’ll always be Yeoman Warder, even without the uniform,” Kingshott says, chuckling. “Maybe I’ll keep a set for my pajamas.”

Caitlin Randall is a London-based freelance writer. She has worked as a staff reporter for Reuters and Dow Jones Newswires. Her work has been published in The Wall Street Journal, Newsday, Art & Antiques Magazine and The Financial Times, among others.