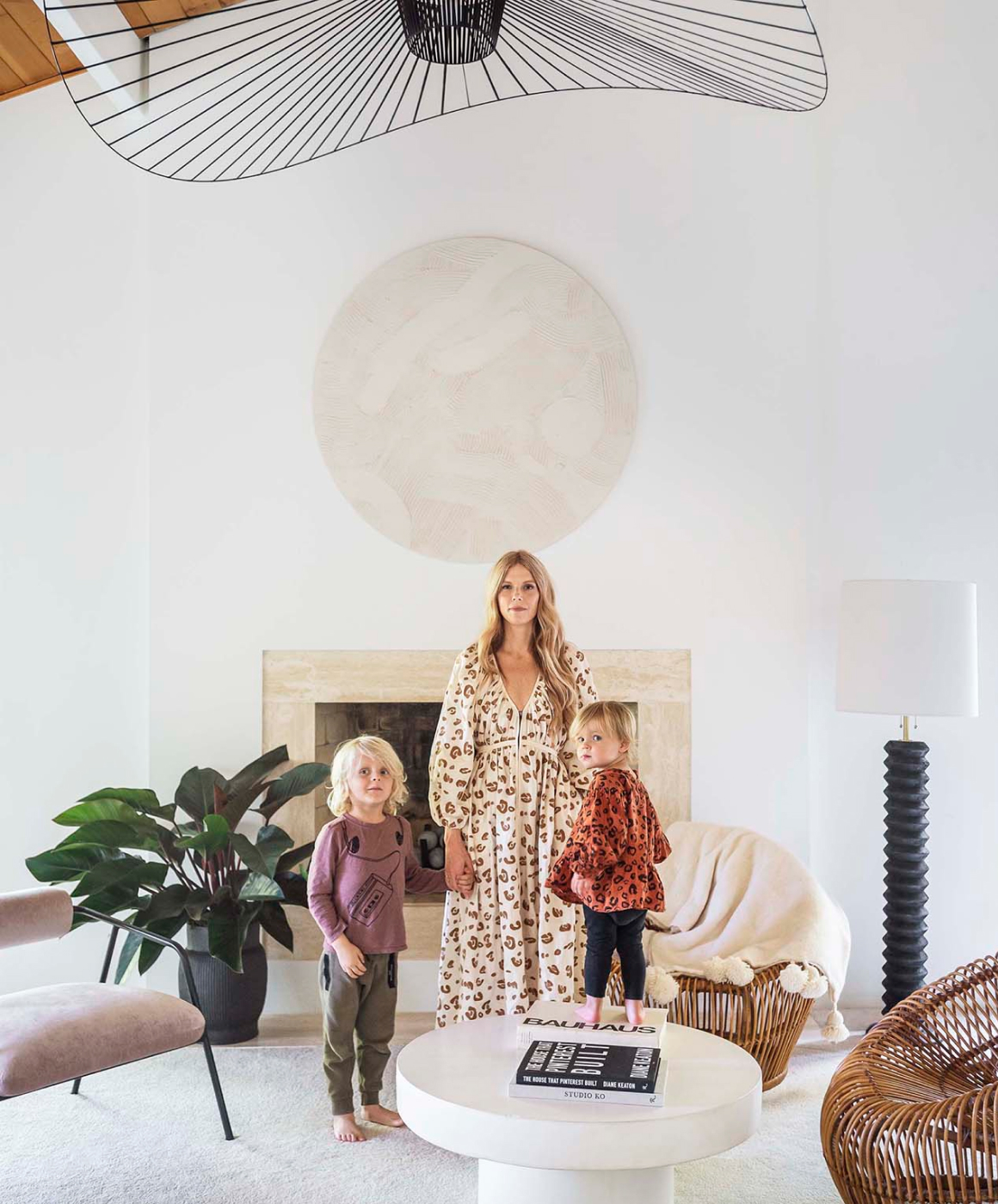 In the living room, Samuel made the sculptural pendant lamp adjustable with a pulley, so it can be moved up or down depending on the mood. Photos by Matthew Williams.

In just five years, interior designer Sarah Sherman Samuel has amassed an obsessive following. With a slew of high-profile renovations (Mandy Moore, Garance Doré) and sold-out collabs (Semihandmade, Cedar & Moss, Concrete Collaborative, Lulu and Georgia), her layered California-cool aesthetic is now a mainstay on just about everyone’s Instagram feed. “My career in Los Angeles was suddenly going crazy,” Samuel affirms. “But I realized I was designing dream homes for everyone except myself.” Indeed, by the end of 2017, her family had outgrown their 1,400-square-foot 1940s bungalow in Venice Beach (as well as their much-photographed one-bedroom A-frame vacation house in Palm Springs), and, with the arrival of their second child, Clover, Samuel and her husband, Rupert, had even given up their master bedroom to be used as a nursery. It was time for a change. After making offers on a handful of properties from California to Texas, on a sweeping cross-country search, they ended up buying sight unseen off Redfin.com. “It was crazy,” says Samuel with a laugh. “But once we took a few FaceTime video tours with our real-estate agent, I just knew it was home.” To create a statement kitchen island, Smauel’s Dad trimmed sheets of unlacquered brass (a material that, Samuel says, “brings character to a new build or remodel”) and wrapped them around MDF plywood to imitate the depth of real cabinets.

I realized I was designing dream homes for everyone except myself.

Located not far from where Samuel grew up (her parents still live about an hour away), the 1980 postmodern fixer-upper in Grand Rapids, Michigan, is surrounded by densely wooded pine groves and boasts more than 4,300 square feet—making it an idyllic spot for raising 4-year-old son Archie and now-2-year-old Clover. Yes, it was in need of some paint and serious updates, but the bones were there, as were a few killer design details that Samuel was swooning over—like the round skylight in the family room, a retro lofted library, 22-foot-high ceilings, and a screened-in porch looking out to a sprawling swimming pool. “It had the mid-century lines I’m drawn to, but on a postmodern house. And I wanted the kitchen and bathrooms to be ugly,” explains Samuel, who prefers having a totally blank slate on big-scale projects. Before even setting foot in the space, she had made 90 percent of the structural renovation decisions in her head and was drawing up plans with local contractors, leaving only the finishes and furnishings to figure out once the family arrived in July 2018. Plus, she and Rupert were prepared to roll up their sleeves and do as much of the work themselves as possible—with the help of her father, a craftsman and woodworker whom she had watched build several of their family homes growing up. 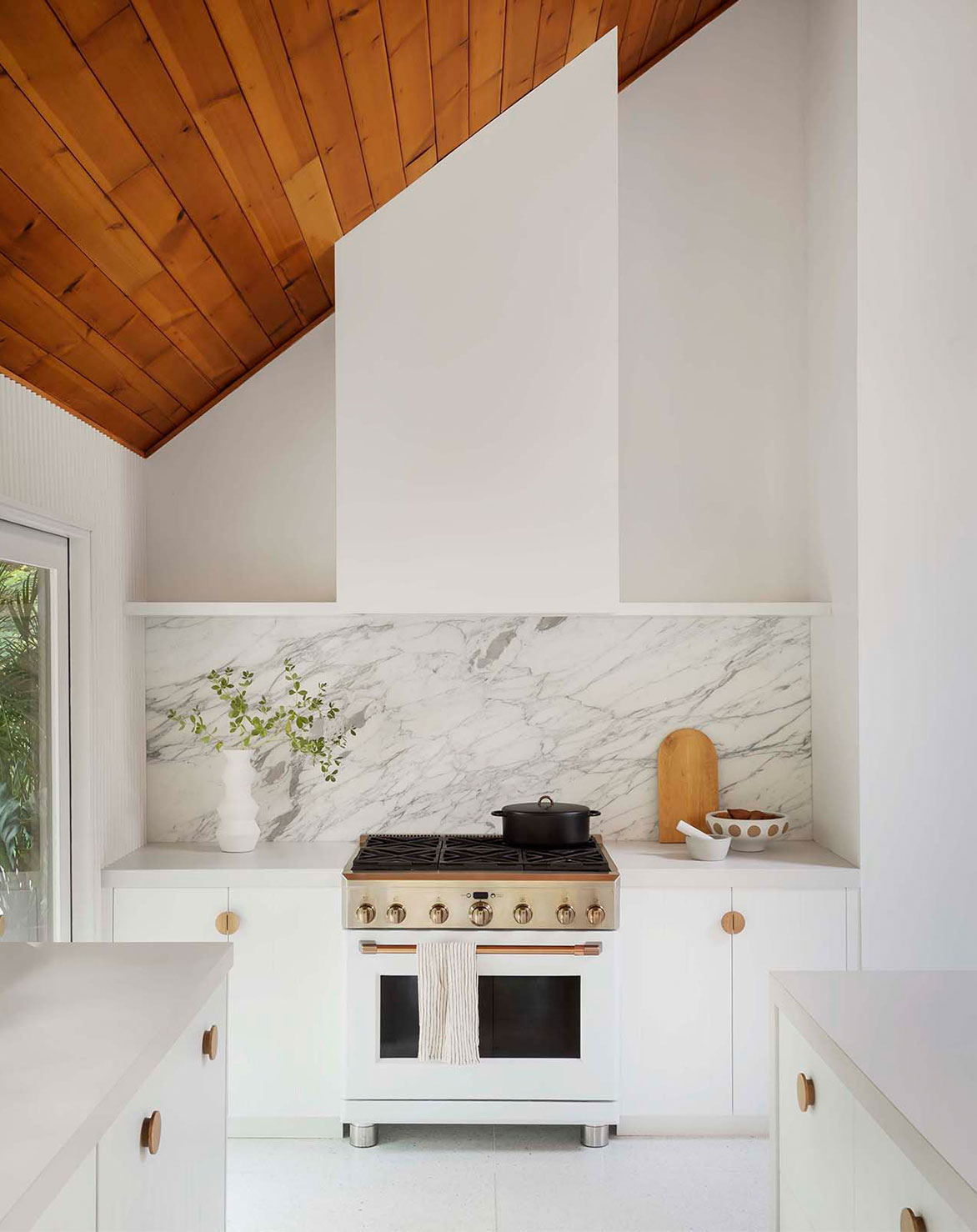 For a clutter-free kitchen, Samuel carved out a station in the pantry to store small appliances and the fridge.

The first major updates? Repainting the entire bright red exterior a sleek Caviar black by Sherwin-Williams. “They really like red out here in Michigan,” jokes Samuel. Next, the over-the-top ’80s relics had to go, like the navy and rust-colored shag carpeting that covered the living spaces and bathrooms (yes, the bathrooms: “You should never, ever carpet a bathroom! You’ll end up dealing with major mold remediation!”), as well as the glass and mirrored built-in bookcases straight out of, the nausea-inducing acid yellow walls, and, of course, the porch’s Astroturf flooring. 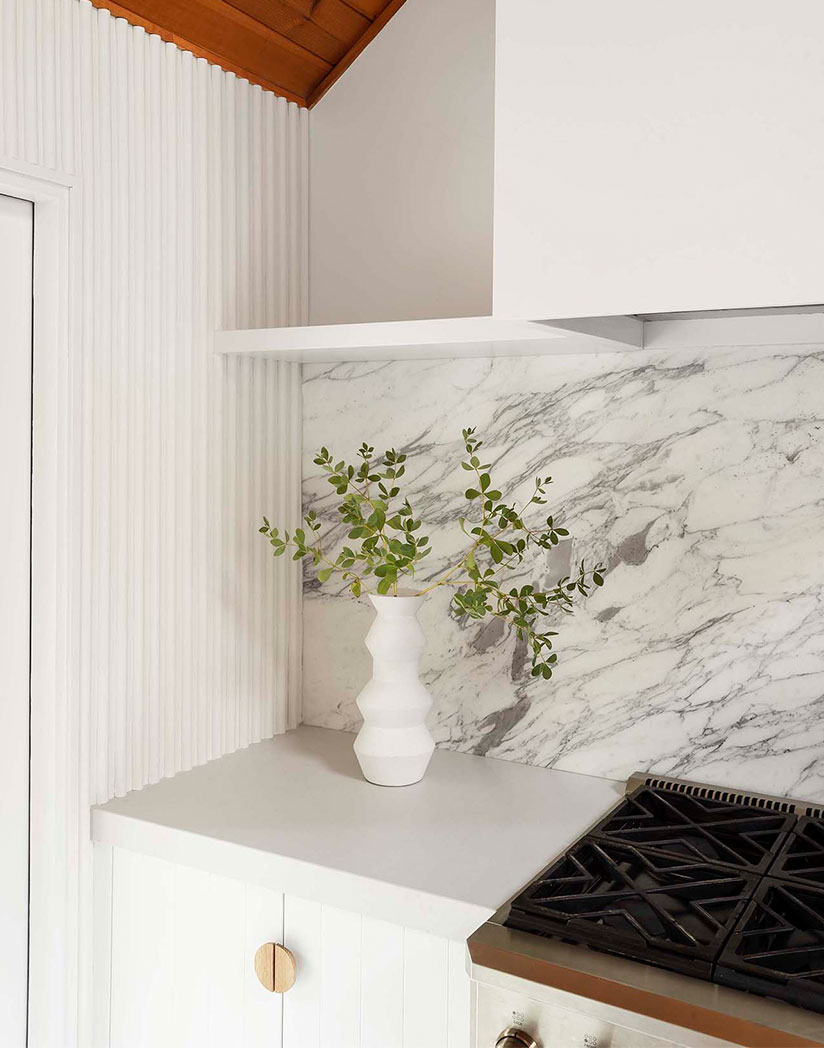 The rippled wall that runs the length of the kitchen was custom-made by pouring plaster into a mold, then finished in a lime-wash paint and coated with a protective sealer to prevent water damage.

The original pinewood tongue-and-groove ceilings dictated a major design decision: Samuel chose to leave the natural wood color untouched rather than paint everything white, but needed to lighten up the floors to balance out the whole. In the kitchen and family room, she went with an ivory terrazzo tile for the floor, while in the formal living room—where retro curved CB2 sofas and rattan chaises encircle the original travertine fireplace—she opted for off-white wall-to-wall carpeting to make the space feel extra warm and cozy during Michigan’s wintry months. “I’ve never put carpet in any of my own houses, as there’s always been this stigma about it,” Samuel says. “Turns out it’s not cheap! But it’s one of my favorite things here.”

I never thought I would have an all-white kitchen, but in this space I wanted the original wood ceiling to be a main focal point. 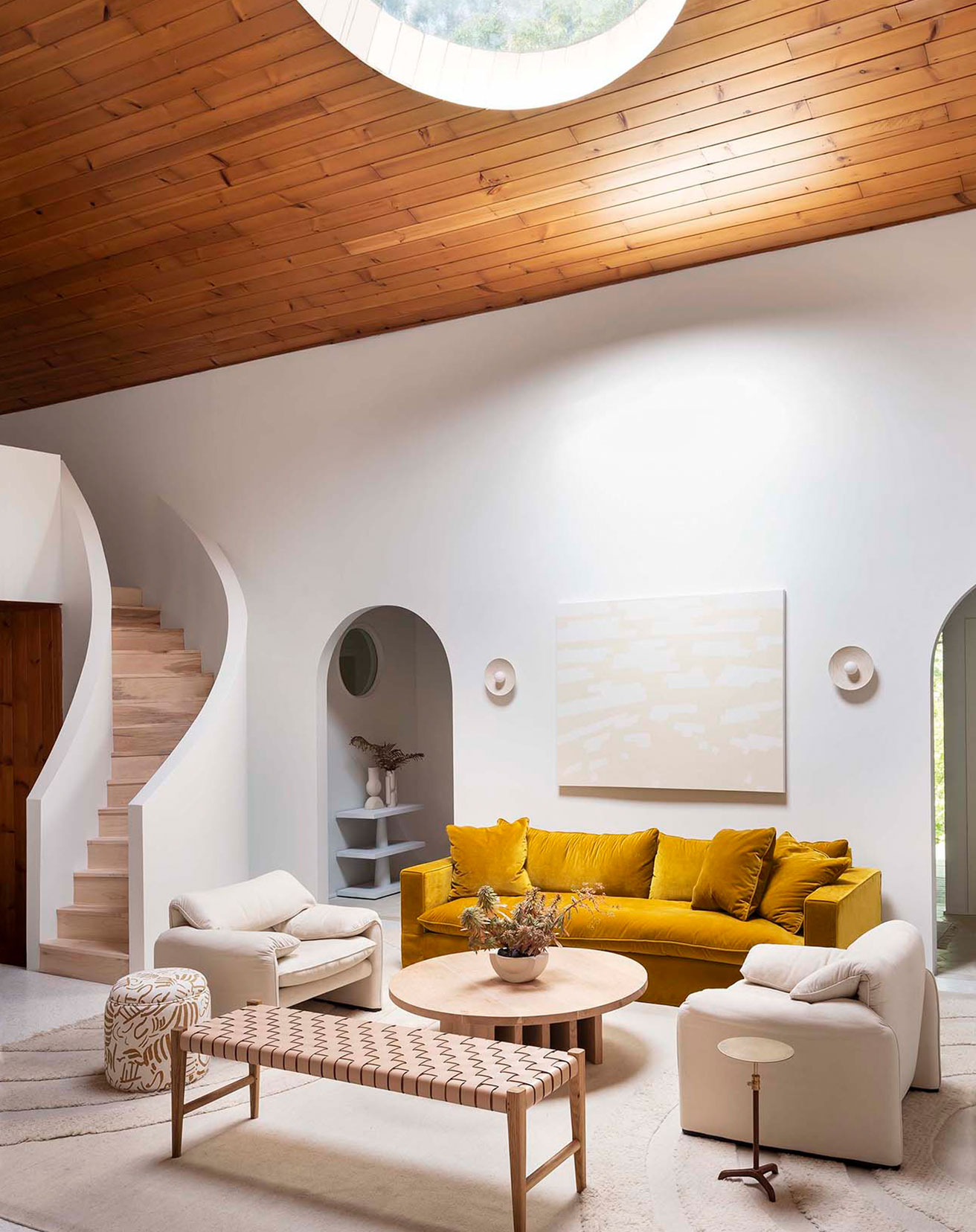 Samuel softened the house’s clean lines with arch motifs and curved shapes that reappear throughout from windows to doorways to the dramatic sweeping banister. The 36” x 48” canvas from Michael’s hung above the sofa—blank—for months before Samuel painted it, deserting her original plans to do a line drawing.

Meanwhile, the gigantic skylight’s circular shape also inspired some cool architectural details throughout the living spaces, like tearing out tiny pocket doors and adding in a handful of arched doorways; the airy decorative cutouts not only create visual interest but also help the flow of the living and dining areas, flooding them with natural light. (The dining room—where a vintage Italian marble table Samuel found at Sotheby’s Home is now surrounded by leather-and-wood chairs from Barnaby Lane—used to be unrecognizably dark and closed off.) “We brought even more postmodern elements into the house—I really played that up,” says Samuel. Poured-concrete recessed built-ins display design books and objets, and a super-mod white spiral staircase, constructed with some bent drywall and Rupert’s help, leads up to the lofted reading nook. “There was a ladder with beige carpeted stair treads before,” she explains. “It looked like a giant cat scratch toy and really had to go.” 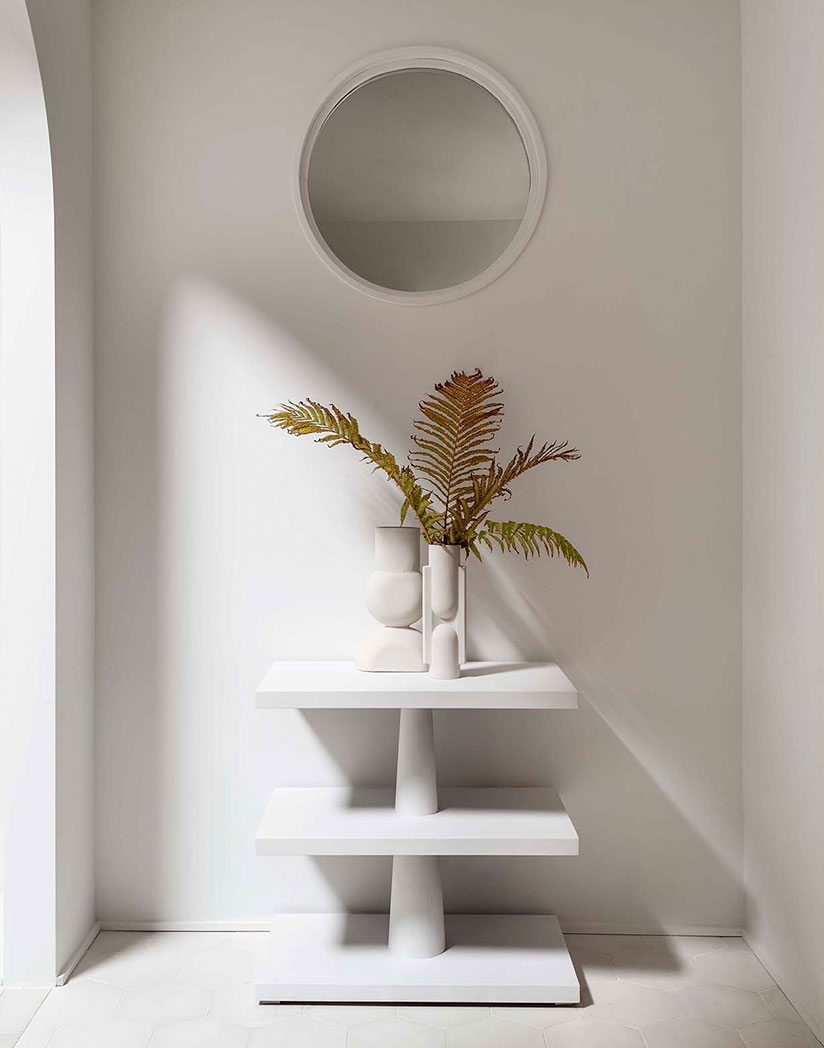 A porthole window lets light into the kids’ bathroom where there was none before—and creates a cool detail in the foyer. The once-brown Lulu and Georgia table was transformed with spray paint to match the walls.

By painstakingly documenting the #SamuelFamilyFixer transformation process for her devout Instagram following and blog, Samuel showed how the renovation, like many, wasn’t without its hiccups—such as when she and Rupert encountered a family of racoons camping out for the winter in their living room chimney, unearthed major toxic mold in the powder room, and weathered a power loss on an install day following a tornado that passed through the area. (“Send me your marble slabs, your generators, and your nannies!” Samuel quipped in one Instagram post.)

But now, after 18 months of renovation, warm neutrals, ochre tones, geometric wall hangings, and sunny upholstery (most notably the pop of marigold in the family room) fill the airy and considered yet casual spaces. “I covered the couch in a performance velvet from Fabricut and so far it has withstood Popsicle stains, yogurt spills, and wear and tear from our two dogs, Pikku and Cracker,” Samuel explains, adding how there’s always a sense of practicality behind her pieces. The sofa is flanked by cream-colored Maralunga armchairs, reissues of the iconic 1973 design from Cassina, as well as earthy Küdd:krig Home tapestries, Cindy Hsu Zell sculptures, and Eny Lee Parker’s quirky ceramic sconces that are “very ’80s in a good way.” Most of Samuel’s favorite decorative discoveries have come from online searches: “I’m essentially a professional Wayfair scout,” she says, referring to how she scored everything from the soaking tub and brass hardware for the master bath to inexpensive blush-hued bedding on the site. 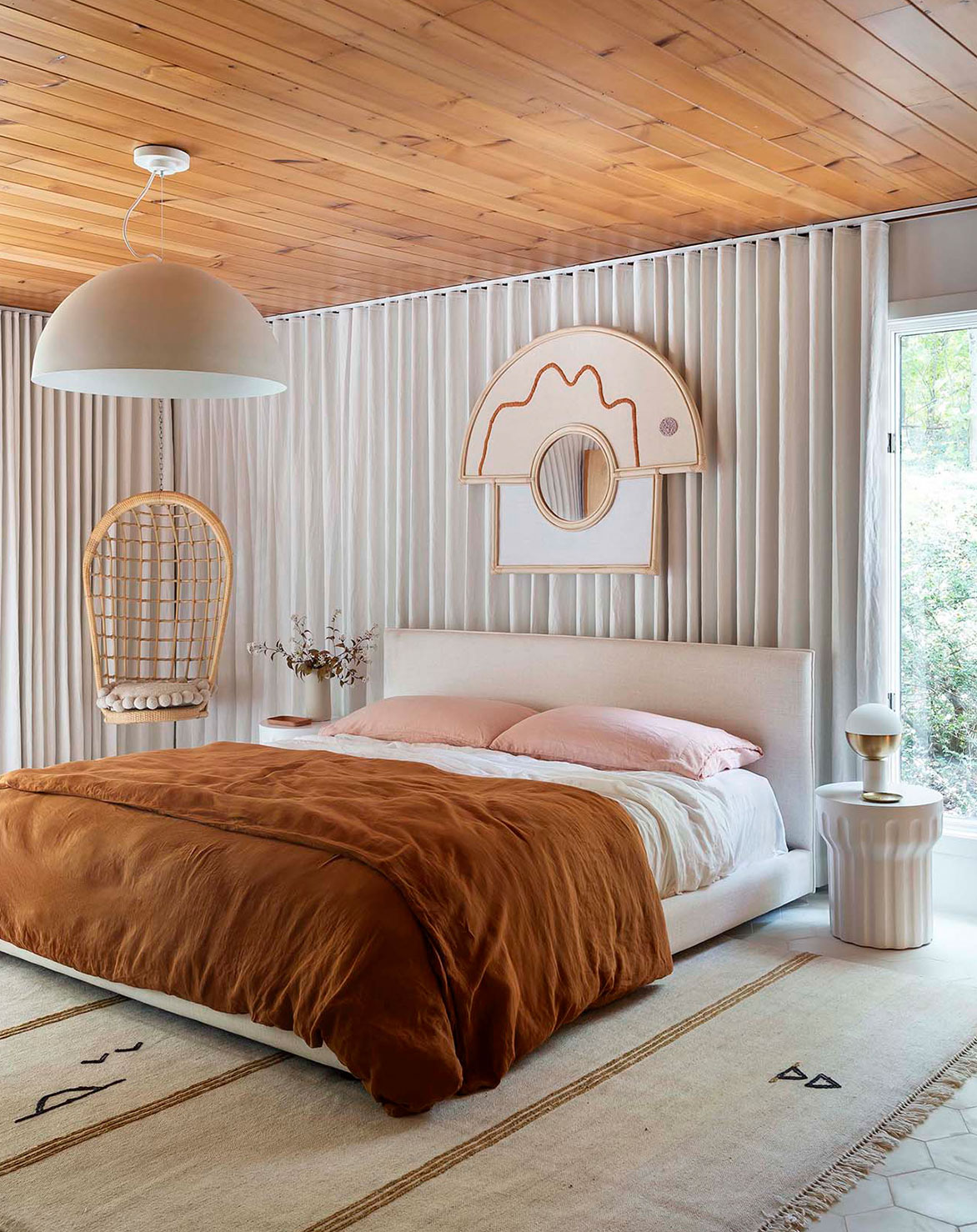 Framing the two skinny windows that flank the bed with drapery would have looked insubstantial, so Samuel wrapped the entire corner of the room with fabric using a mounted curtain track and hung the mirrored artwork from the ceiling to create a floating effect.

The house feels the most ‘me’ of any of the places I’ve ever lived in or renovated. 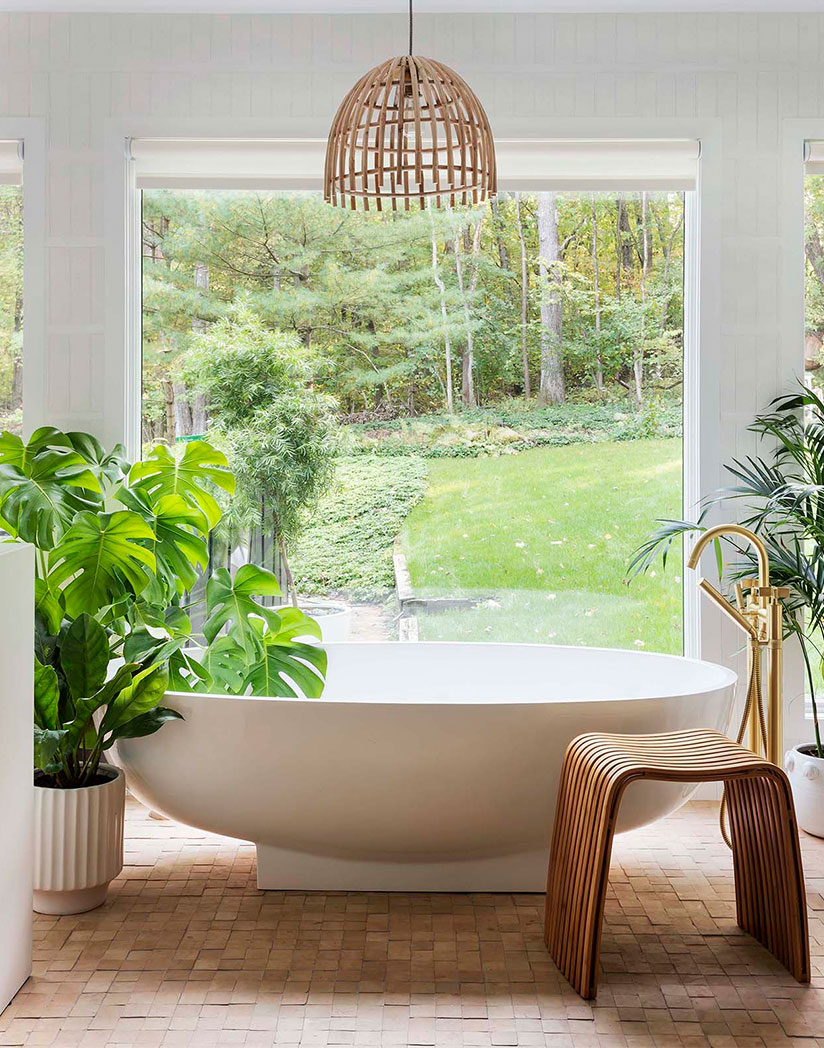 Monstera is Samuel’s go-to bathroom plant—the tropical greenery thrives off the condensation and, when placed in large pots, grows to the size of a large sculpture.

The designer found other clever ways to work within her budget. “I feel like I’ve hacked every single thing in this house,” says Samuel, whose DIY projects have included spray-painting her daughter’s Lulu and Georgia dresser a mauve-hued Audrey’s Blush; gluing wood blocks to add height to a pair of Urban Outfitters bathroom mirrors; painting Archie’s bedroom walls and ceiling an oakmoss-and-white stripe meant to mimic a circus tent; and recovering Ikea kitchen cabinets with her own Semihandmade beaded drawer and door fronts. The creative process for the kitchen renovation overall was one she took to heart: “I often reference clients’ wardrobes when designing for them, because what you choose to wear is such a great reflection of your style, and your home should channel that, too.” For Samuel that meant “bright and natural, with lots of whites and ivories and a touch of gold,” as well as mixing in subtle quartz, brass, marble, and concrete finishes. She also ditched the ugly baseboard heating and installed Warmboard heaters underneath the floors—which she laid down to keep costs low. (Check out her saved Instagram stories to see Rupert going to town with an electric screw gun.)

“The house really tells my story as a designer,” Samuel says. “It feels the most ‘me’ of any of the places I’ve ever lived in or renovated.” Not having client input or an architect to bounce ideas off of was a challenge, but it also pushed her to be more flexible and creative than she’s ever been before. “My worst and pickiest client is, I have to admit, me,” she adds with a laugh. “But creating the perfect place for raising our two kids here at home in Michigan and seeing them reconnect to nature is hands down my greatest project yet.”