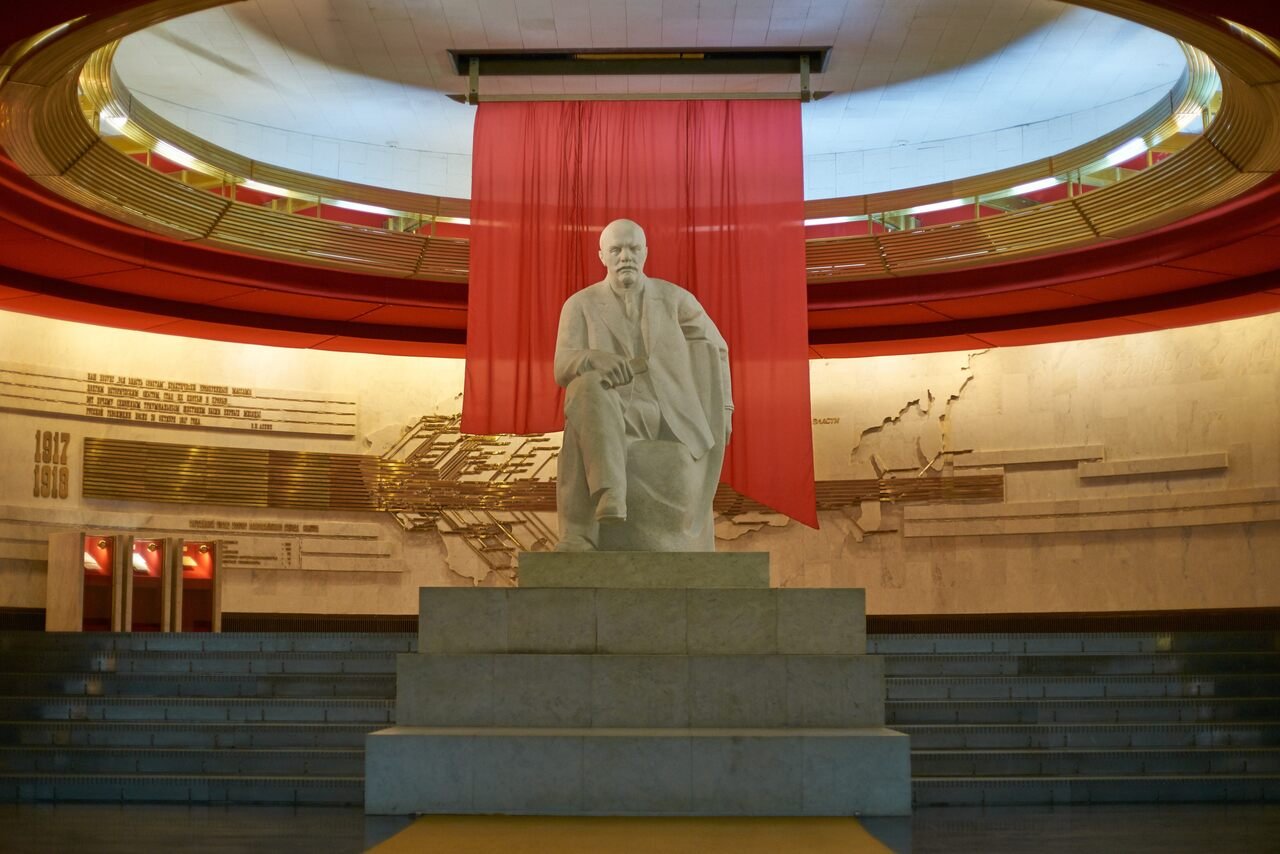 The Lenin Museum opened in 1987, just a few years before the Soviet Union collapsed. Photo by Yuri Litvinenko.

The versatility of the Apple II made it one of the most widespread personal computers of the 1970s and 80s. In schools, labs, and even command centers, these classic American computers kept a foothold even after the advent of more advanced machines. But of all the places you’d expect to find the computer that popularized The Oregon Trail, the mournful museum of a Communist leader is one of the most unlikely. 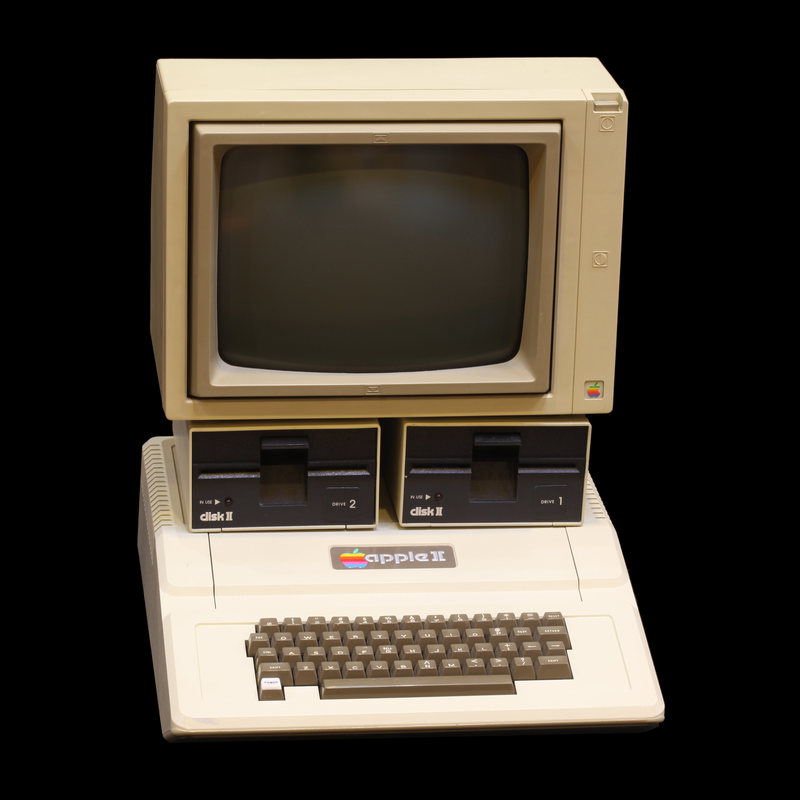 “Originally, they were called ‘ideologico-emotional centers,’” says Boris Vlasov, Deputy Director of Research at Gorki Leninskiye Museum-Reserve, standing in front of a large cube of cranberry-red glass. As he presses a button on a bulky remote, the cube lights up from the inside, revealing moving images surrounded by elaborate props and scenery. Each of the museum’s five cubes, which look almost like monoliths from 2001: Space Odyssey, houses a short three-dimensional presentation. Moving mirrors and Pepper’s ghost projectors—the same technology that helped Tupac perform a posthumous concert—make them look like a theatrical play.

There was a reason for the spectacle. By 1972, when the idea of the museum was outlined by a Soviet government, the public image of Vladimir Lenin was in decline. “There was nothing new to be said about Lenin: his course of life was documented minute by minute, and it was impossible to find any new material,” Vlasov says. “It wasn’t enough to tell about the life of Lenin—one had to impress and surprise.” Lenin was known for his revolutionary politics and massive infrastructure projects, but also for authoritarian policies, mass executions, and concentration camps that he oversaw as the leader of the USSR. 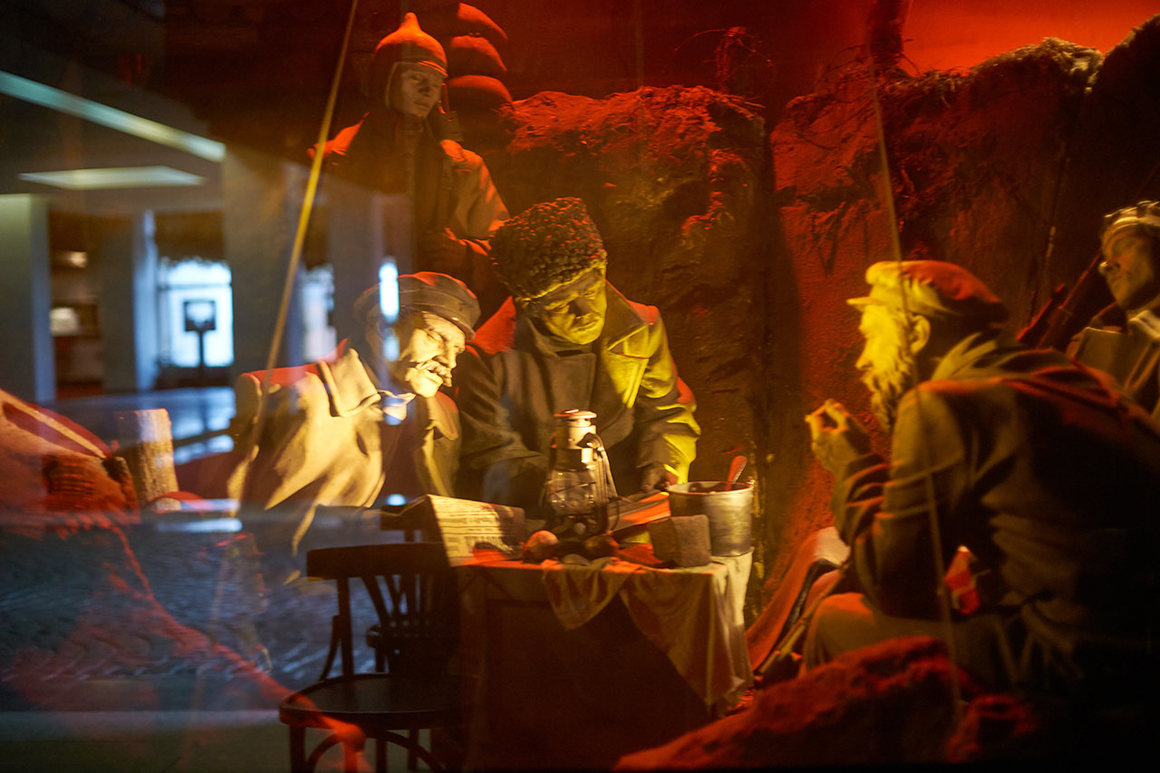 Some of the “cubes” are as tall as a person and show life-sized historical reenactments. Photo by Yuri Litvinenko.

The Soviets were well-versed in the construction of impressive buildings, and the museum was designed by Leonid Pavlov, a constructivist architect who had already built several research and computing centers in a similar cuboid fashion. But creating machinery for a smaller-scale visual spectacle turned out to be a challenge. Lights, motors, and reel-to-reel players had to be synced to each other, each following a script to the second.

Fortunately, there was worldwide demand for equipment that could control such devices. In 1981, the British audiovisual company Electrosonic launched the ES4000. It was a set of computer accessories and software that helped technicians program the building blocks of multimedia exhibitions. The system was built into a computer Electrosonic was already using internally—the Apple II. (A 1987 copy of Apple User magazine spotlighted the ES4000.) The choice of an Apple machine simplified the distribution in many parts of the world. By sticking to a popular, off-the-shelf computer, the company could buy Apple computers locally and extend them with the ES4000 hardware later.

But the creators of the Lenin Museum had a problem. Soviet law barred them from trading directly with foreign companies, and Agat-7, a Soviet Apple II clone, was unlikely to do the job. It required an external card to run software made in the West, and its 60-pin slots would not fit the 50-pin cards used by the ES4000. “All our programs depend on these add-on cards to provide the time code and high-speed communications facilities,” Bob Simmons, Electrosonic’s Managing Director, told Apple User at the time. That meant the company would need to bring their own Apple computers to the Soviet Union. 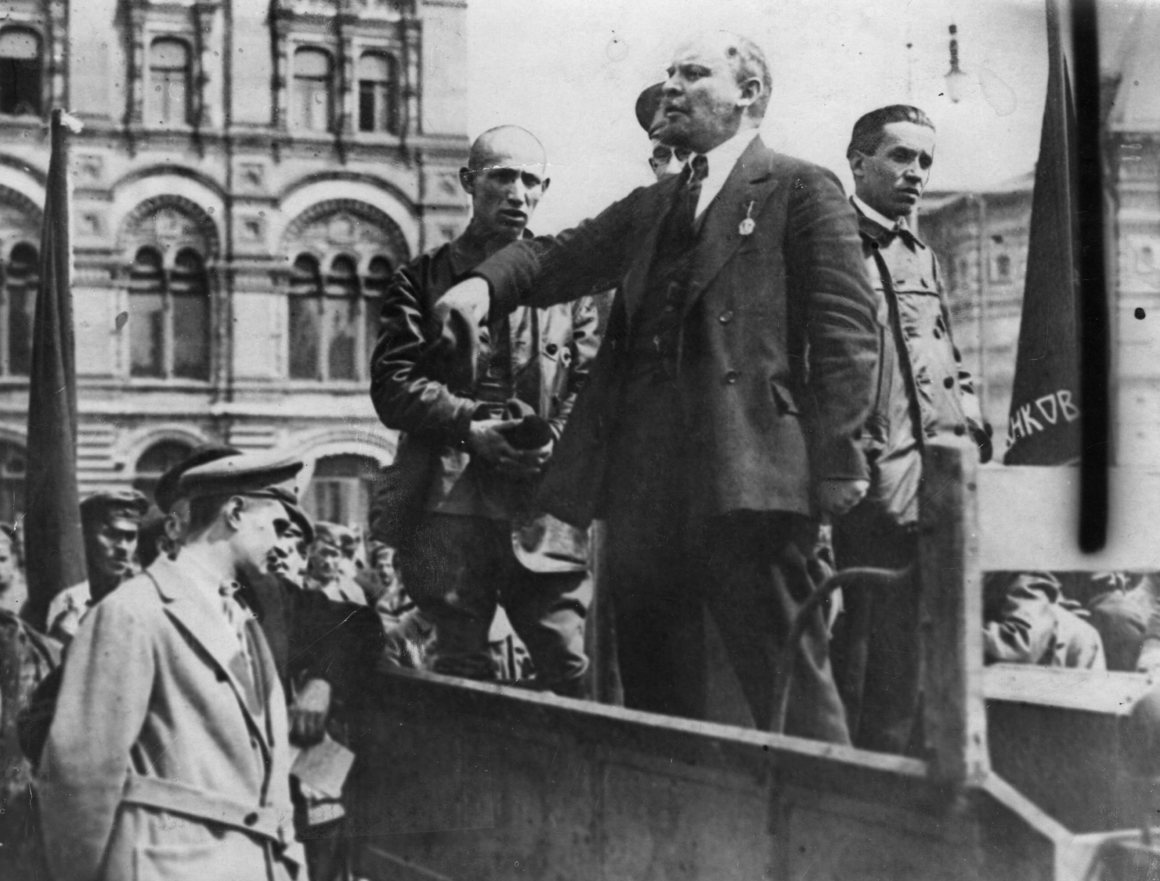 Vladimir Ilyich Lenin (1870-1924) gives a speech from the back of a vehicle in a Russian street. Credit: Hulton Archive / Getty Images.

To get around Soviet regulations, the deal was signed with a specialized economic body, Technointorg, and carried over through Beech Compix, a British front for the Soviet Chamber of Commerce and Industry. Foreign staff traveled to the USSR, too—but Cascade, a Russian company, took credit for their job, seemingly to preserve the impression that Soviet technology could not be beat.

“Officially, Electrosonic did not bring any computer equipment, and the software was formally developed by Cascade,” Vlasov says. But internal documents tell a different story: “General control algorithms and local programs are written by ES personnel.” Vlasov adds, “There were Russian specialists overseeing them, but they were from Leningrad Pictorial and Decoration Art Combine—producers of the exhibition.” The Electrosonic logo is still visible on the museum’s bulky remote controls. 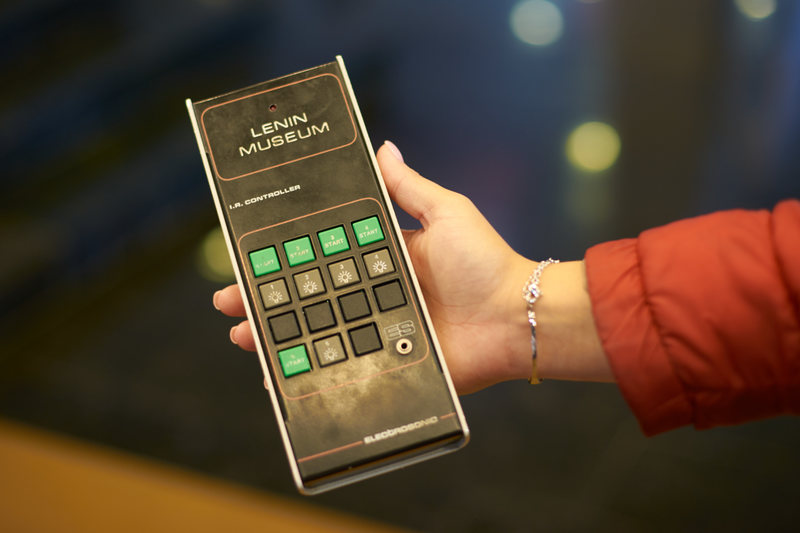 A remote control at the Lenin Museum still bears the Electrosonic logo. Photo by Yuri Litvinenko.

Electrosonic supplied the equipment, but it was up to local engineers to keep it working. This task was delegated to various state enterprises, with most of them originally established for military purposes. In the turbulent time after the dissolution of the USSR, many Russian agencies changed their purpose or went defunct. This period was not kind to the most technically impressive of the cubes, which depicted a historic Soviet plan to electrify the nation. It used a laser projector to beam Lenin’s signature onto a simulated waterfall, and was even featured in Electrosonic’s corporate publication. “The humidity was too high for 1980s lasers,” Vlasov says.

Still, as if frozen in time, Lenin Museum outlived the fall of state-enforced communism with virtually no changes. Nothing was dismantled, altered, or even substantially upgraded, and the same piece of technology installed in the 1980s is still serviced twice a year. Repairing 40-year-old computers is no small task; according to Vlasov, it falls to former staff, who come out of retirement just to provide upkeep to the machines.

In 1985, while the museum was going to get its hands on 8-bit computers, Apple itself was trying to supply the USSR with more powerful Macintoshes. The company sent none other than Steve Jobs to sell Apple computers to the Soviet National Academy of Sciences—and through it, to schools throughout the Soviet Union. (Just a year later, US export restrictions would make such deals impossible.)

The deal never went through, reportedly because of Jobs’ eccentric remarks and public support of Leon Trotsky. In Odyssey: Pepsi to Apple by John Sculley, Al Eisenstat, who accompanied Jobs, recalled him talking about creating AI simulations of Soviet revolutionaries: “The one thing we can’t do is to ask them a question and get their current thinking. Ahh, but in the future you are going to have artificial intelligence and you’ll be able to ask Mr. Lenin a question or Mr. Trotsky a question.” 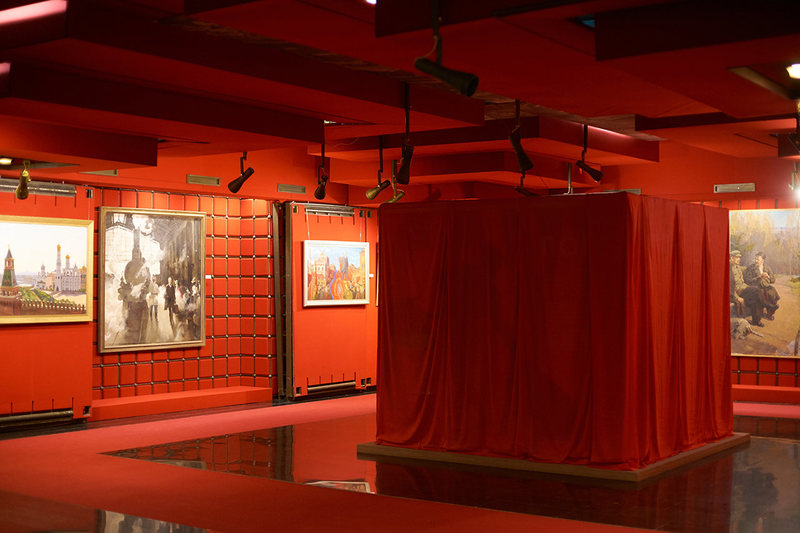 Strict geometry is prominent in the museum, both in its architecture and exhibits. Photo by Yuri Litvinenko.

Just a few years later, Apple officially entered the country through Intermicro, a Soviet-Austrian joint venture that adopted foreign desktop publishing systems to Russian specifications. Anatoly Karachinsky, head of Intermicro and a current president of IBS Group, was also at the forefront of the publications Burda Moden and Kommersant, making Macs a de facto standard of the Russian publishing industry.

Still, Apple technology made very few inroads into Russian government institutions—with the notable exception of the Lenin Museum. Intermicro and other Apple distributors had little luck in pushing Macs to schools or agencies. “There was a major supply of Macintoshes to Bashkortostan’s tax office,” says Andrey Antonov of the Moscow Apple Museum. “It was arguably the most global effort.” More recently, Russia has even tried to deter government workers from using iPhones, pushing them to use a homegrown mobile OS instead. In this context, the Lenin Museum is both a technological time capsule and a national outlier. 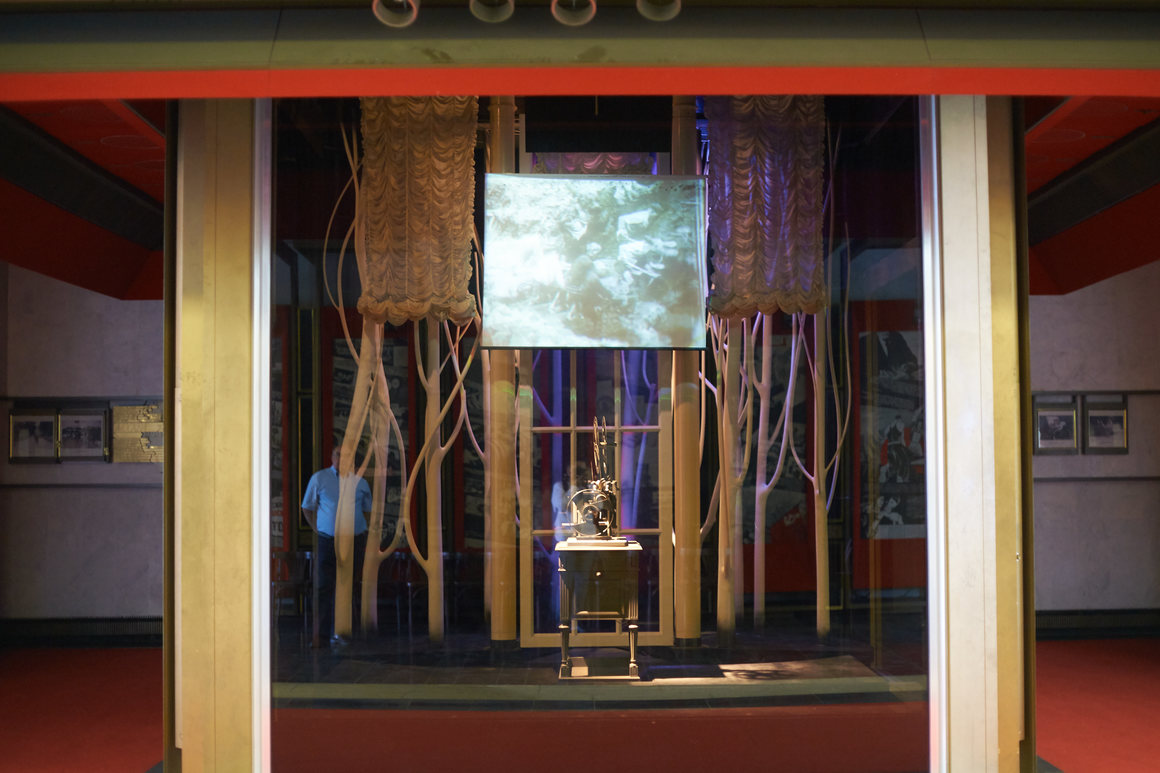 Presentations inside the “cubes” combine archival material with theatrical scenery. Boris Vlasov, the deputy director of research at the museum, is visible at left. Photo by Yuri Litvinenko.

For the most part, the Lenin Museum was left untouched by the change around it. Just as it did in the waning years of the USSR, it focuses on Lenin’s achievements only, omitting stories about the violence of his regime. The addition of information on the anti-communist White movement, which fought the Bolsheviks in the Russian Civil War, did not make it less biased.

There are no plans to update the museum. Instead, it aims to preserve its technological attraction in the way it was first set up. “The cubes were to be replaced in 10 to 15 years,” says Vlasov. They have now lasted more than 30 years. His colleagues even hope to repair the broken one without altering the original artistic work. “It’s going to be the exact same presentation, recreated with modern technology,” he says.

Yuri Litvinenko is a trade journalist from Russia. When not covering the dairy industry, he spends time being fascinated by legacy technology, both “retro” and gadgets approaching retro status.