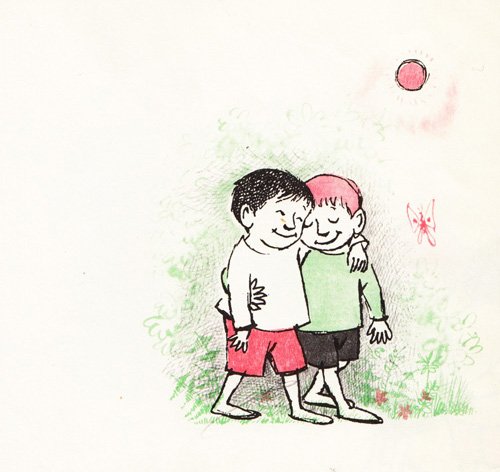 Friendship, C.S. Lewis believed, “like philosophy, like art, like the universe itself … has no survival value; rather it is one of those things which give value to survival.” But the poetic beauty of this sentiment crumbles into untruth for anyone who has ever been buoyed from the pit of despair by the unrelenting kindness of a friend, or whose joys have been amplified by a friend’s warm willingness to bear witness.

I often puzzle over the nature, structure, and function of friendship in human life — a function I have found to be indispensable to my own spiritual survival and, I suspect, to that of most human beings. But during a recent interview on Think Again, I found myself concerned with the commodification of the word “friend” in our culture. We call “friends” peers we barely know beyond the shallow roots of the professional connection, we mistake mere mutual admiration for friendship, we name-drop as “friends” acquaintances associating with whom we feel reflects favorably on us in the eyes of others, thus rendering true friendship vacant of Emerson’s exacting definition. We have perpetrated a corrosion of meaning by overusing the word and overextending its connotation, compressing into an imperceptible difference the vast existential expanse between mere acquaintanceship and friendship in the proper Aristotelian sense.

In countering this conflation, I was reminded of philosopher Amelie Rorty’s fantastic 1976 taxonomy of the levels of personhood and wondered what a similar taxonomy of interpersonhood might look like. I envisioned a conception of friendship as concentric circles of human connection, intimacy, and emotional truthfulness, each larger circle a necessary but insufficient condition for the smaller circle it embraces. “I live my life in widening circles,” Rilke wrote. 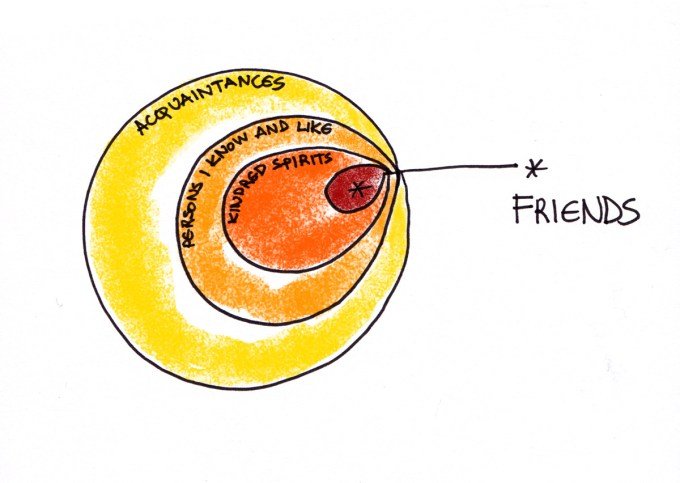 Within the ether of strangers — all the humans who inhabit the world at the same time as we do, but whom we have not yet met — there exists a large outermost circle of . Inside it resides the class of people most frequently conflated with “friend” in our culture, to whom I’ve been referring by the rather inelegant but necessarily descriptive term person I know and like. These are people of whom we have limited impressions, based on shared interests, experiences, or circumstances, on the basis of which we have inferred the rough outlines of a personhood we regard positively.

Even closer to the core is the kindred spirit — a person whose values are closely akin to our own, one who is animated by similar core principles and stands for a sufficient number of the same things we ourselves stand for in the world. These are the magnifiers of spirit to whom we are bound by mutual goodwill, sympathy, and respect, but we infer this resonance from one another’s polished public selves — our ideal selves — rather than from intimate knowledge of one another’s interior lives, personal struggles, inner contradictions, and most vulnerable crevices of character.

Some kindred spirits become friends in the fullest sense — people with whom we are willing to share, not without embarrassment but without fear of judgment, our gravest imperfections and the most anguishing instances of falling short of our own ideals and values. The concentrating and consecrating force that transmutes a kinship of spirit into a friendship is emotional and psychological intimacy. A friend is a person before whom we can strip our ideal self in order to reveal the real self, vulnerable and imperfect, and yet trust that it wouldn’t diminish the friend’s admiration and sincere affection for the whole self, comprising both the ideal and the real.

It is important to clarify here that the ideal self is not a counterpoint to the real self in the sense of being inauthentic. Unlike the seeming self, which springs from our impulse for self-display and which serves as a kind of deliberate mask, the ideal self arises from our authentic values and ideals. Although it represents an aspirational personhood, who we wish to be is invariably part of who we are — even if we aren’t always able to enact those ideals. In this sense, the gap between the ideal self and the real self is not one of insincerity but of human fallibility. The friend is one who embraces both and has generous patience for the rift between the two. A true friend holds us lovingly accountable to our own ideals, but is also able to forgive, over and over, the ways in which we fall short of them and can assure us that we are more than our stumbles, that we are shaped by them but not defined by them, that we will survive them with our personhood and the friendship intact.

For a complementary perspective, see poet and philosopher David Whyte on the true meaning of friendship and John O’Donohue on the ancient Celtic notion of “soul-friend.”

Special thanks to my friend Wendy MacNaughton for the diagrammatic inspiration