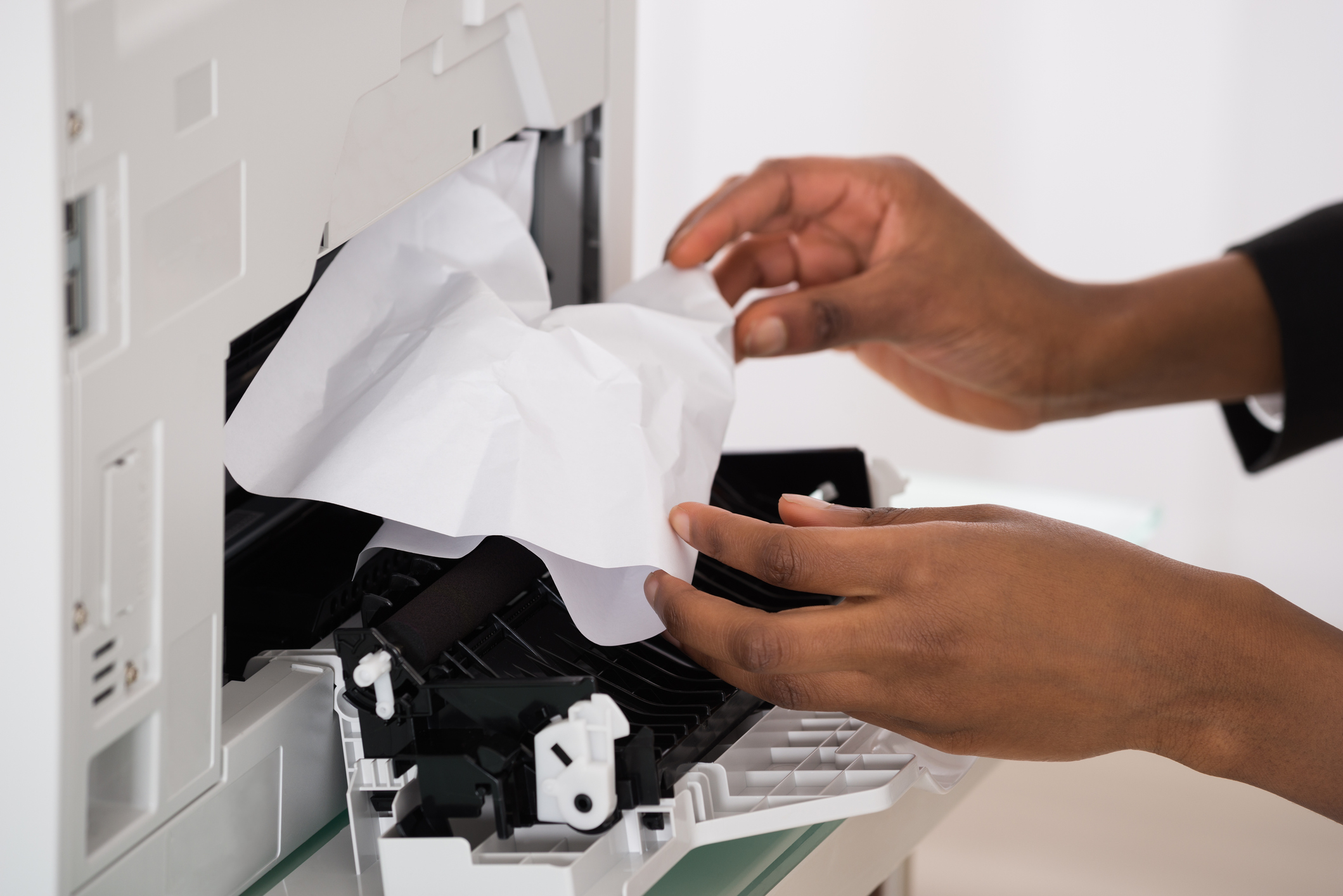 The paper included a little graph, charting the upwards trajectory of circuit numbers over time, that surely made proto-tech investors salivate. Sometime after 1975, his prediction became popularly known as Moore’s Law, even though it technically wasn’t a law but an observation.

Here in the year 2019, with the full benefit of hindsight, I propose a subsidiary law, called the InkJet Corollary. It stipulates that as computer technology gets exponentially harder/better/faster/stronger, printers will get exponentially shittier.

Imagine a similar chart as the one described above, except measuring the overall shittiness of printers, increasing over time. While it’s within the realm of possibility that at some point in the future a bold new startup run by identical twins both named Jorf might try to “design a better printer” which would end up looking like a piece of mid-century modern furniture made from sawdust-wood scavenged from an Ikea dumpster, this is highly unlikely. The need for printing physical documents is rapidly declining and home printers will soon be obsolete. There will be no innovations or disruptions. All of the true Silicon Valley printing disruptors have moved on to 3D printing, leaving goofballs like the Jorf bros to abscond with all their Kickstarter money and go run a #vanlife Instagram account.

Printers haven’t always sucked. The first mass-market home inkjet printer was the Hewlett-Packard Deskjet 500, which was introduced in 1988 and sold for $1,000 (adjusted for inflation, that’s about $2,160). It was beige and boxy, resembling a brutalist office structure that has been dipped in vanilla cream. Strangely, it worked as advertised. “The HP DeskJet 500 was a workhorse. It never failed me in college, or beyond. I printed a lot, and never had a paper jam,” wrote Scott Merrill in a 2010 piece for TechCrunch. “Everything I threw at the DeskJet 500, it printed. Everything.” Additionally, let’s take a brief moment to acknowledge the Game Boy Printer from 1998, which was a portable thermal printer (like a receipt machine) designed to print photos taken with the Game Boy Camera. The quality was primitive, and it could only store about 30 photos, but considering the mass success of digital smartphone cameras since its release, they were way ahead of their time. There’s also the mostly defunct Little Printer, which is sort of like an open-source, arty reimagining of the Game Boy Printer. Both are pretty cool, but incredibly niche, and their greatness does not detract from over 30 years of overall suckitude.

In these modern times, printers have become so shitty that it’s easier to just not own one and deal with whatever small inconveniences might result. I haven’t had one for about a decade, and have rarely missed it. On the few occasions that I need to print something out, I walk down the hill from my apartment to a local copy shop, where I can rent a computer and print out whatever I need. This is cheaper and more convenient than having a big, expensive hunk of plastic take up space on my desk, sucking up ink. Specifically, a “good” printer costs about $180. In 2018, I went to the copy shop only once, and spent a total of $2.40. At this rate, it would take me about 75 years to spend the equivalent cost, without factoring in expensive ink refills.

I’m not alone. When I walk around my neighborhood — to the copy shop and beyond — I sometimes encounter stray printers abandoned on the sidewalk. Often, they have signs declaring them “free.” Nobody ever takes them, and they are gradually lost in weeds and buried in assorted trash, destroyed by the elements, gradually reclaimed by the earth.

What was once an expensive, essential consumer tech item gradually became hated trash. What went wrong?

Turns out, “Why do printers suck?” is a fairly common question. A quick google search dredges up a number of articles written over the years. For proof, please refer to this article (Gizmodo, 2012), plus this one (Wall Street Journal, 2015) and this one (The Wirecutter, 2016) and this one (New Statesman, 2016), plus this YouTube video (Business Insider, 2018). Almost all of them use the same headline and use an image from that scene from Office Space where the protagonists kick the shit out of a combination printer/copier. There’s a huge number of Reddit posts asking the same question, with slight variations (why do printers STILL suck?). The InkJet Corollary holds strong.

Scan through enough of these and one begins to pick up trends as to main sucky things about printers that grinds humanity’s gears. The devices are prone to various physical malfunctions, like paperjams. They also have to attempt to cooperate with every computer ever made, and every computer that ever will be made. This results in inevitable fuckups, especially as your printer ages and is eventually phased out by its manufacturer, its software left to rot, unupdated.

But the overarching reason for the printer’s slide into uselessness is that for the companies who sell them, the products themselves are loss-leaders. Printer companies, in their grand race to the bottom, are priced as low as possible. Whatever money they end up losing in the process is later made up via ink sales. This is why ink is so expensive, and also why it always seems like ink runs out too quickly. Companies have been cutting back on the amount of ink in their cartridges, designing printers to brick if you utilize off-brand cartridges (even ones sold by monks), and juking internal sensors to tell you that you need ink long before the cartridge is actually empty. It also means that the printers themselves are made as cheaply as possible, resulting in further mechanical errors and short product life spans.

Of course this sometimes results in ambitious lawsuits. A New Jersey firm brought a class action case against Brother Printers, alleging that their products stop working before their toner runs out. HP settled for a staggering $1.5 million after it was sued for its anti-third-party ink cartridge firmware, meaning the internal printer software that prevented the use of any brand of ink but their own. Epson faced a similarly framed lawsuit. Despite the occasional legal disputes, printers remain cheap and shitty, largely because the entire business model is a racket.

Strangely, for the wide extent of coverage of inkjet suckitude, nobody seems willing to take the extra half-step to reckon with the fundamental, systematic reason printers suck. Blame the glory of the free market. Manufacturers were incentivised to make them shittier. It’s similar to how freemium mobile games tend to prioritize addictiveness over quality in order to generate more in-app purchases. Or how Facebook utilizes aggressive growth hacks over not incinerating democracy. It’s a prioritization of profit above all else.

Whenever someone on social media suggests even marginal reforms to our economic system, a grating meme is often deployed in response: “But capitalism made the iPhone!” If the iPhone is supposed to represent a triumph of capitalism, let’s then consider the home printer as an implicit critique of it: But it also made our shitty printers!