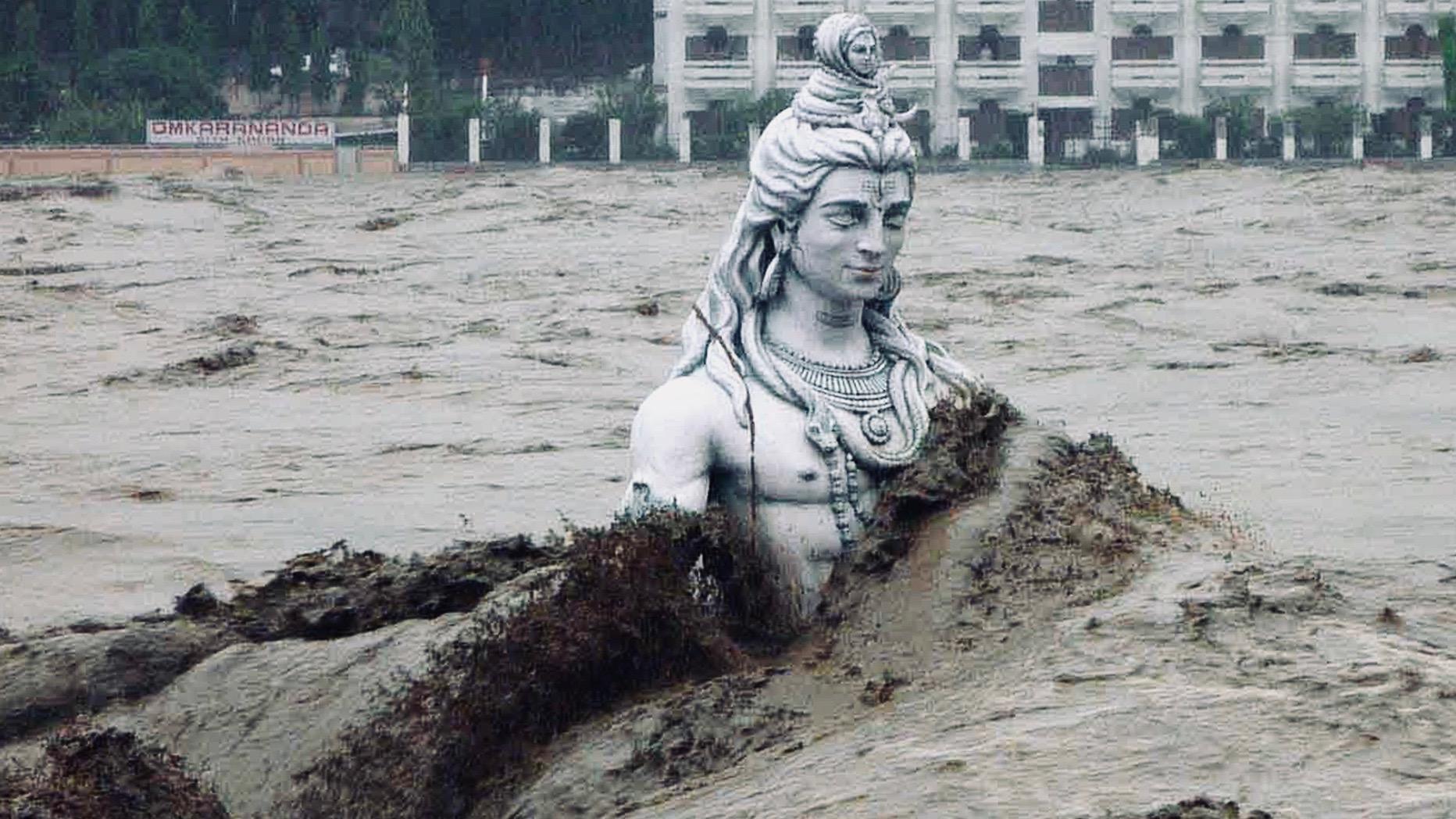 A submerged statue of the Hindu Lord Shiva stands amid the flooded waters of river Ganges. Photo by Reuters/Stringer, India.

When a tree falls in a river, it impedes the water’s flow. No, this isn’t a Zen koan. It is the beginning of a description of innovation and illumination that nature provides, which we can use to understand and improve our lives and society, according to Duke University thermodynamics expert Adrian Bejan.

“Once the tree, or another obstacle—a beaver dam, say—is pushed away, water flows more freely throughout. All the waters have been liberated relative to their previously constricted flow, and that freed area attracts more movement. As a result, the surrounding areas benefit,” Bejan explains to Quartz.

Apply this to a society and you have a physical description of innovation and its effects.

When one person solves a problem with a new idea—and innovation generally stems from an issue that needs resolution, Bejan says—then people in the local landscape and beyond are also positively influenced, economically and otherwise. Money and new notions then flow more freely as the single idea leads to related innovations and opportunities, creating a cascade of additional flow.

Bejan was awarded a Franklin Institute Medal for his flow-theory-turned-physics-principle called constructal law. It posits that all animate or inanimate systems—art, trees, people, organizations, and financial structures—follow the natural design principle of flow. The rule states that for any system to persist over time, it must evolve according to impositions, working with currents that flow through it, and moving with them. To survive and thrive, we must accommodate visible and invisible pressures.

The professor believes pretty much everything can be explained by physics. On June 13, 2018, he published a paper in the International Journal of Energy Research with researchers from Yildiz Technical University in Turkey and Federal University of Paraná in Brazil that shows “the thermodynamic basis for social organization.” In it, he argues that human movement and social constructs are described by flow in nature—just as rivers and trees branch in predictable patterns based on pressures, so do people’s minds, our organizations, and whole societies.

While working on the paper, Bejan realized he and his colleagues had inadvertently alighted upon a physical description of innovation and human illumination. ”This theoretical framework also reveals the physical meaning of innovation: It is a local design change that liberates the flow over the entire territory inhabited by the organized movers,” the study concludes.

Simply put, innovations open new pathways that generate opportunity for more movement for everyone around them. “The sudden removal of a local obstacle to human flow opens a valve for new flow,” Bejan argues. “It can be measured in physical terms as an increase in movement.”

The economic impact of a single innovation is two-fold. The inventor and its local settlement attract sudden movement and the whole flowing area, or population, becomes wealthier than before. “This is the tangible, or physical effect of a single idea, and why research, science, questioning, and tinkering benefit the whole of society,” Bejan says.

Advanced societies incorporate this understanding into policies instinctively—governments, for example, encourage small businesses or educational institutions with tax breaks. But we haven’t visualized the effect of innovation physically or conceived of the physics principle as predictive, which means the concept remains abstract. Because he believes that nature predicts the patterns of our lives and minds, Bejan says we can rely on what we know about the rules of flow to enhance our institutions and ourselves.

The visualization of innovation simplifies calculations and eliminates doubt. Think of the rushing of rivers where there’s free flow, and conceptualize this as a metaphor for creativity in culture—it’s easy to see why more, better education and increased research can yield benefits for everyone though they may seem to be a drain on resources when considered superficially. Bejan argues that cultures that fail to recognize these benefits are doomed to “buy ideas” and stay behind, always faltering economically.

Understanding physical phenomena—movement in nature—gives us a better grasp on what’s possible and what’s optimal. Bejan cites moving type, book binding, the printing press, steam power, electric light, air conditioning, and the iPhone as just some of the ideas that have made their inventors rich or famous or both, created economic opportunities for others, and changed the world.

“Innovation is really the mother of social evolution,” he believes.

A Brief History of Literacy

One of Bejan’s examples—the invention of the printing press—illustrates how innovations solve a problem and lead to additional flow with cascading effects.

In the 12th and 13th century in Europe, only clergymen were educated. Those who dedicated their lives to the church learned to read and write, which arguably stifled the generation of ideas. The problem was solved with a series of interdependent innovations that led to radical change, widespread education, revolution, and gave rise to the natural sciences.

In the 14th century, the first universities were cathedral schools. They supplanted the medieval monastery as the centers of learning. Monasteries, then the major book producers, couldn’t keep up with increasing demand for manuscripts made by the new universities—plus they were hostile to secular literature.

Making books back then was a painstaking process. It involved copying a text by hand. Only the wealthiest readers—people like the Medici family in Italy—could employ their own copyists. And until the 15th century, profiting from manuscripts was strictly prohibited. So the book business could also not be lucrative.

That changed after 1450, when moveable type was perfected in Germany. This innovation—already employed with limited success in Asia in the the 12th and 13th centuries—relied on prior inventions like ink and paper to culminate in a printing press. It was more convenient than manuscripts and copyists and could be lucrative. Publishing became a business, and a booming one at that.

Social forces contributed. Douglas McMurtrie’s 1967 book The Book: The Story of Printing & Bookmaking advanced a theory similar to Bejan’s about innovation. McMurtie argued that printed texts became successful when two conditions arose that are “prerequisite to the development of a creative idea into a useful invention.” First, materials were needed to turn the idea into a thing and, second, a social demand had to exist and be filled.

The demand was there. It’s estimated that in 1500 about 20 million books were published in Europe.

This led to the literary revolution that gave birth to the Age of Enlightenment, a flourishing of philosophical and scientific thought across the continent. By the 16th century, the groundwork was laid for the natural sciences—human knowledge—to replace the divine as our predominant source of authority, according to the Stanford Dictionary of Philosophy. By the 17th century, philosopher Baruch Spinoza’s Ethics dared to describe god as nature, basically, paving the way for atheism, the toppling of monarchies, and modern western thought.

Bejan argues that nature’s description of innovation extends to personal enlightenment. When a single individual becomes “enlightened” by knowledge or a realization, it creates new connections and fortifications in the brain’s synapses. A slew of previously unrealized connections may then follow so that the flow of thought is more evolved.

Countless neurons are connected to one another on the brain’s cortex. “One connection at one point—a new concept, idea or vision—illuminates the whole cortex, with lights that flash randomly, not synchronically. More numerous and more frequent lights make an enlightened mind,” Bejan says.

The more ideas we encounter and are interested in, the more likely we are to be enlightened thinkers. This is borne out by the research of Stanford University psychologist Carol Dweck, whose work on growth mindsets has revolutionized psychology.

Most recently, Dweck and her colleagues argued in a study (pdf) soon to be published in the journal Psychological Science that having a fixed “theory of interest” makes people less curious, less inclined to learn, less motivated, and less resilient when a topic becomes difficult. By contrast, those with a growth mindset—people who encounter new ideas with relish and don’t believe there’s just one area where they’ll flourish—are both more realistic about obstacles and more persistent learners whose work can ultimately be informed by endless perspectives. Someone with a growth mindset solves the problem of restricted flow and has a better chance of innovating.

To put it in physical terms—which is what Bejan prefers—the metaphorical tree that blocks the river’s rush leads a persistent and creative person to an innovation or an insight. They push the tree out of the way somehow, with thought and application. This, in turn, causes more cortical connections and more ideas to flow.

That has a good chance of improving not only their lives, but the world we all share.