Humans can hold only four or five items in their conscious awareness, or working memory, at one time. Overloading that capacity causes the neurological juggling act behind working memory to fall apart. Credit: Malina Omut for Quanta Magazine.

In 1956, the renowned cognitive psychologist George Miller published one of the field’s most widely cited papers, “The Magical Number Seven, Plus or Minus Two.” In it, he argued that although the brain can store a whole lifetime of knowledge in its trillions of connections, the number of items that humans can actively hold in their conscious awareness at once is limited, on average, to seven.

Those items might be a series of digits, a handful of objects scattered around a room, words in a list, or overlapping sounds. Whatever they are, Miller wrote, only seven of them can fit in what’s called working memory, where they are available for our focused attention and other cognitive processes. Their retention in working memory is short-lived and bounded: When they’re no longer actively being thought about, they’re stored elsewhere or forgotten.

Since Miller’s time, neuroscientists and psychologists have continued to study working memory and its surprisingly strict limitations. They have found that the limit may really be closer to four or five items than seven. And they have studied the ways in which people work around this constraint: We can remember all the digits of a phone number by “chunking” digits (remembering 1, then 4, as the single item 14, for instance), or develop mnemonic devices for shuffling random digits of pi out of longer-term storage.

But the explanation for why working memory starts to falter at such a seemingly low threshold has been elusive. Scientists can see that any attempt to exceed that limit causes the information to degrade: Neuronal representations get “thinner,” brain rhythms change and memories break down. This seems to occur with an even smaller number of items in patients who have been diagnosed with neurological disorders, such as schizophrenia.

The mechanism causing these failures, however, has remained unknown until recently.

In a paper published in Cerebral Cortex in March 2018, three scientists found that a significant weakening in “feedback” signals between different parts of the brain is responsible for the breakdown. The work not only provides insights into memory function and dysfunction, but also offers further evidence for a burgeoning theory of how the brain processes information.

Synchronized Humming in the Brain

Earl Miller, a neuroscientist at the Picower Institute for Learning and Memory at the Massachusetts Institute of Technology; Dimitris Pinotsis, a research affiliate in his lab; and Timothy Buschman, an assistant professor at Princeton University, wanted to know what sets the capacity limit of working memory so low.

They already knew that a network involving three brain regions — the prefrontal cortex, the frontal eye fields and the lateral intraparietal area — is active in working memory. But they had yet to observe a change in neural activity that corresponded to the steep transition between remembering and not remembering that comes with exceeding the working memory limit.

So they returned to a working memory test that Miller’s lab had performed a few years earlier, in which the researchers showed monkeys a series of screens: first, a set of colored squares, followed briefly by a blank screen, and then the initial screen once more, this time with the color of one square changed. The animals had to detect the difference between the screens. Sometimes the number of squares fell below their working memory capacity, sometimes above. Electrodes placed deep in the monkeys’ brains recorded the timing and frequency of brain waves produced by various populations of neurons as they completed each task.

These waves are essentially the coordinated rhythms of millions of neurons that become active and go quiet simultaneously. When brain areas exhibit matching oscillations, both in time and in frequency, they’re said to be synchronized. “It’s like they’re humming together,” Miller said. “And the neurons that hum together are talking.” He likens it to a traffic system: The brain’s physical connections act like roads and highways, while the patterns of resonance created by these oscillating brain waves “humming” together are the traffic lights that actually direct the flow of traffic. This setup, researchers hypothesize, somehow seems to help “bind” active networks into a firmer representation of an experience.

In their recent work, Miller and his colleagues mined the oscillation data they’d collected from the monkeys for information about how this three-part memory network functions. They built a detailed mechanistic model that incorporated assumptions about the network’s structure and activity, based on previous research: the locations and behaviors (say, excitatory or inhibitory) of specific neural populations, for example, or the frequencies of certain oscillations. The researchers then generated several competing hypotheses for how the different brain areas might be “talking” to one another — including the direction and strength of that dialogue — as the monkeys had to remember more and more items. They compared those computations to their experimental data to determine which of the scenarios was most likely. 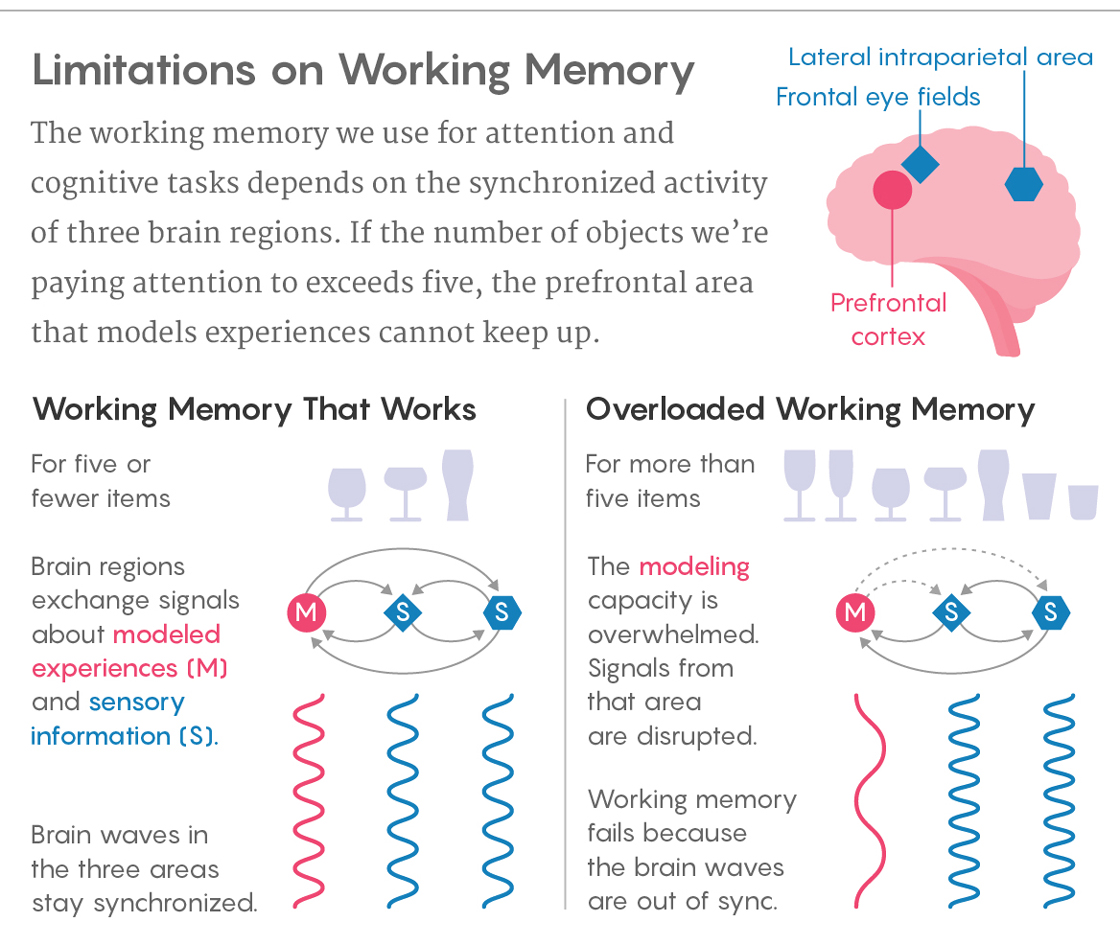 Their modeling confirmed that the three brain regions act like jugglers engaged in a complex game of catch. The prefrontal cortex seems to help construct an internal model of the world, sending so-called “top-down,” or feedback, signals that convey this model to lower-level brain areas. Meanwhile, the superficial frontal eye fields and lateral intraparietal area send raw sensory input to the deeper areas in the prefrontal cortex, in the form of bottom-up or feedforward signals. Differences between the top-down model and the bottom-up sensory information allow the brain to figure out what it’s experiencing, and to tweak its internal models accordingly.

Miller and his colleagues found that when the number of items to be remembered exceeded the capacity of the monkeys’ working memory, the top-down feedback connection from the prefrontal cortex to the other two regions broke down. The feedforward connections, on the other hand, remained just fine.

The weakening of the feedback signals, according to the group’s models, led to a loss of synchrony between the brain areas. Without the prediction-oriented communications from the prefrontal cortex, the working memory network fell out of sync.

But why is the top-down feedback so vulnerable to an increase in the number of items to be remembered? The researchers’ hypothesis is that the modeled information coming from the prefrontal cortex essentially represents a set of predictions about what the brain will perceive in the world — in this case, the contents of the items being held in working memory. “For example, as you are reading this sentence, you will have expectations about the current word, phrase and sentence,” Karl Friston, a neuroscientist at University College London who was not involved with the study, wrote in an email. “Having a representation or expectation about the current sentence means you have an implicit representation of the past and future.”

Many neuroscientists believe that the brain relies heavily on such “predictive coding” of sensory data to perform its routine cognitive and command functions. But Miller and his colleagues theorize that when the quantity of items placed in working memory gets too large, the number of possible predictions for those items cannot easily be encoded into the feedback signal. As a result, the feedback fails and the overloaded working memory system collapses.

Miller’s lab and others are working to carve out a more important role for the interplay between brain waves in scientists’ model of working memory, which traditionally places most of the emphasis on the firing activity of individual neurons. They’re also currently investigating why the upper bound on working memory hovers around four or five items, and not some other number. Miller thinks the brain is juggling the items being held in working memory one at a time, in alternation. “That means all the information has to fit into one brain wave,” he said. “When you exceed the capacity of that one brain wave, you’ve reached the limit on working memory.”

“The question now is where all this is going to take us,” said Rufin VanRullen, a researcher at the French National Center for Scientific Research who finds the team’s modeling and conclusions “powerful,” pending further experimental confirmation. “We need to actually go inside the brain and find more direct evidence for these connections.”

The potential payoff is high. Cementing a predictive coding model for working memory won’t just enable a better understanding of how the brain works and what might go wrong in neurological diseases. It also has critical implications for what we mean by “intelligence” — and even selfhood, according to Friston. As a start, having a better grasp of what the brain’s feedback connections are doing could lead to big steps in artificial intelligence research, which currently focuses more on feedforward signals and classification algorithms. “But sometimes a system might need to make a decision not about what it sees but based on what it remembers,” Pinotsis said.