Our Attitude Toward Aliens Proves We Still Think We’re Special

Why we downplay Fermi’s paradox.

One summer’s day in 1950, the great Italian-American physicist Enrico Fermi was having lunch with the physicists Edward Teller, Emil Konopinski, and Herbert York at Los Alamos when the conversation turned to a flood of recent UFO sightings all over the United States. There were also, coincidentally, reports of trashcans going missing in New York City at the time. A New Yorker cartoon connected the dots and accused interstellar visitors of the misdeed. In the relaxed atmosphere of that lunchtime conversation, Fermi remarked that the New Yorker’s solution, by proposing a single common cause of two independent empirical phenomena, was in the very best traditions of scientific methodology.

The lunchtime chat stayed on the topic of ET. While they obviously didn’t take seriously the reports of flying saucers, Fermi and his companions began to earnestly discuss things like interstellar—and even superluminal—travel. Then, after some delay—and, one might imagine, in the midst of some tasty dish—Fermi allegedly asked his famous question. Where, indeed, is everybody? Where are the extraterrestrials? 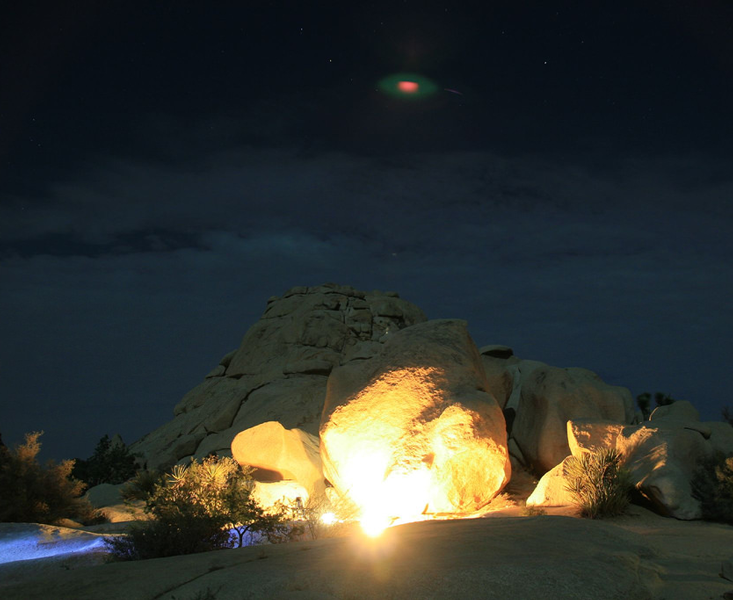 The Milky Way galaxy is about 100,000 light-years from edge to edge, Fermi reasoned, which means that a star-faring species would need about 10 million years to traverse it, even if moving at a very modest velocity of 1 percent of the speed of light. Since the galaxy is more than a thousand times older than this, any technological civilization will have had a lot of time in which to expand and colonize the whole galaxy. If one species were to fail in this endeavour, another wouldn’t. Consequently, if intelligent species were out there in any appreciable numbers, they would have been here already. And yet, we do not see them on Earth or in the solar system. For Fermi and many thinkers since, this constituted a paradox.

But, still, the paradox remains incompletely understood by science, incompletely digested by popular culture, and even actively resisted or deliberately ignored. In this sense, it has become a type of Rorschach test: Our attitudes to the paradox tell us something about ourselves.

The strong version of Fermi’s paradox (it is only proper and intellectually honest to tackle the strongest version of any particular scientific problem) doesn’t just ask why there aren’t aliens here on Earth. It also asks why we don’t see any manifestations or traces of extraterrestrial civilizations anywhere in our past light cone—that is the whole volume of space and time visible to us, extending billions of years into the past, to the epoch of earliest galaxies.

The strong Fermi’s paradox became even stronger, so to speak, in 2001, with the work of Charles Lineweaver and collaborators on the age distribution of terrestrial planets in the Milky Way. His calculations show that Earth-like planets in our galaxy began forming more than 9 billion years ago, and that their median age is 6.4 ± 0.9 billion years, which is significantly greater than the age of the Earth and the solar system. This means that a large majority of habitable planets are much older than Earth. If we believe that humans and the planet we live on are not particularly special compared to other civilizations on other planets, we would conclude that the stage of the biosphere and technology on other occupied planets must be, on average, older than the corresponding stages we see on Earth. If we humans are now on the cusp of colonizing our solar system, and we are not much faster than other civilizations, those civilizations should have completed this colonization long ago and spread to other parts of the galaxy.

We presume ourselves to be so special that the question “Where is everybody as complex and important as ourselves (or more)?” cannot be taken seriously.

Another piece of recent science amplifies Fermi’s paradox even further. Geochemical and paleobiological research has recently confirmed that the oldest traces of living beings on Earth are at least 3.8 billion years old, and probably as old as 4.1 billion. The Earth itself is only 4.5 billion years old. While the mechanism of abiogenesis (the origination of life) is still largely unknown, the evidence of abiogenesis occurring early in the Earth’s history seems incontrovertible. The consequences are rather dramatic: If life is quick to form after its host planet has formed, we get good probabilistic support for the existence of simple life on many planets in the Milky Way, and potentially complex life on some of them.

Now that we know that the Earth is a latecomer, and believe the foundations of life have the power to take hold quickly, Fermi’s paradox is more puzzling than ever. In the evocative words of physicist Adrian Kent: It’s just too damn quiet in the local universe.

In spite of all this, Fermi’s paradox is not only downplayed and ignored by a large part of the scientific community, but also mocked and even censured. Distinguished SETI researchers, like Frank Drake or Seth Shostak, claim in their memoirs that they had not heard about Fermi’s paradox until very recently and that it should not be taken seriously. Astrobiology, one of the premier journals in the field, has recently instituted a policy of not considering manuscripts dealing with Fermi’s paradox, including even short communications and book reviews. There are many scientists who, like the British astronomer John Gribbin, are happy to proclaim that there is no paradox whatsoever, since “we are alone, and we had better get used to it.”

In principle there may be several reasons for this attitude. But in my opinion one underlies all of them: We humans still think we’re special.

In 1543, two revolutionary books transformed our view of both the universe and ourselves. One, written by Flemish physician Andreas Vesalius, was titled De humani corporis fabrica (On the Fabric of the Human Body), and it laid the foundations of modern medical science by proving once and for all that our bodies are not mystical objects but physical systems amenable to scientific study—and not very different from the bodies of animals. The other, entitled De revolutionibus orbium coelestium (On the Revolutions of the Heavenly Spheres) was of even greater significance by a little-known Polish polymath by the name of Nicolaus Copernicus. It overthrew the cosmological paradigm that had reigned for almost 2,000 years and was supported by the political and religious authorities of the day. In doing so, he inadvertently redefined the very word revolution, from a purely technical term inside to a household label for any dramatic change in any field. 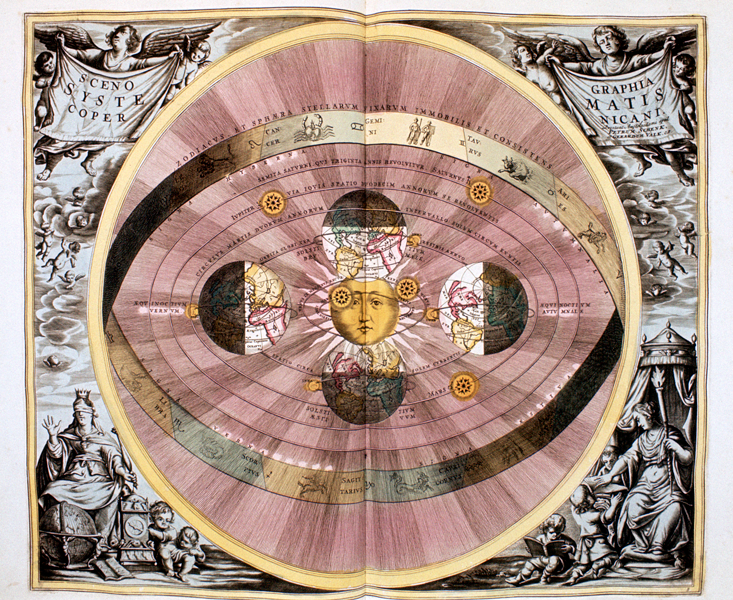 The Copernican Revolution, sometimes called the Scientific Revolution, was not only about whether the Earth rests at the center of the universe with the sun and planets moving around it. It was also about whether humans were the most important objects in the universe. In a sense, the “de-centering” of the Earth brought about by the Copernican Revolution was a consequence, rather than a cause of a new way of thinking about ourselves: We were becoming a part of nature, rather than its exalted goal. If Earth is a typical planet revolving around a typical star (and, as we learned much later, in a typical galaxy), then there is no scientific reason to assign special importance to ourselves. Copernicanism broadly understood is this assertion that humans are nothing special across space, time, and other more abstract parameter spaces. It has enabled tremendous advances in science since the times of Vesalius and Copernicus by combating unsupported anthropocentrism.

But our institutions are still profoundly anthropocentric. We deny even the most basic rights to other parts of nature, including our close animal relatives, some of which share more than 97 percent of our DNA. We pollute our environment with close to zero regard for the well-being of its ecosystems—and we fight pollution only if and when it inconveniences us. Scientific experiments on human beings are not only illegal, but are considered barbarous even when they could provide some useful information. This is in sharp contrast to our practice of experimenting on lab animals, hunting foxes, or killing bulls in the arena. Even in the purely abstract realms of knowledge, one often hears the complaint that physical sciences are “cold” and “inhuman” exactly because they are less permeated by anthropocentrism than, say, philosophy or the humanities or arts. Almost 500 years after the onset of the Copernican revolution, we have a relic belief in the exalted nature of the human mind.

Where is everybody? Where are the extraterrestrials?

These remnants encourage us to resist animal rights, and the reality of anthropogenic climate change—and Fermi’s paradox. We presume ourselves to be so special that the question “Where is everybody as complex and important as ourselves (or more)?” cannot be taken seriously. ET isn’t here, we think, because there’s no equal to us. After Copernicus came Darwin’s revolution, and then Freud’s, delivering blows to our illusions of uniqueness and grandiosity within the biological and mental domains, respectively. It’s not that Fermi’s paradox belongs in this progression—it doesn’t explode any myth of our specialness—but appreciating its full import relies on the perspective that Copernicus, Darwin, Freud, and others have given us.

That clearly is a step too far. Many of us choose to ignore Fermi’s paradox, or even fight it, because it requires too complete an acceptance of our cosmic mediocrity. We would rather secretly believe we are special than confront the real consequences of the paradox—consequences like, for example, intelligence being a maladaptive trait, or our universe being a simulation, or us living in a cosmic zoo. Some of us even go so far as to argue that we have become a navel-gazing, self-absorbed civilization, without much chance of developing a sustained cosmic presence and industrial bases all over the solar system. Destroying what Olaf Stapledon and R. Buckminster Fuller have dubbed the cosmic vision of humanity’s future lets us duck out of the Fermi’s paradox conversation. If we can’t do it, our extraterrestrial peers can’t do it either and we shouldn’t waste time and money searching for them. This subtle form of anthropocentrism leads us to a very dangerous path, since it impedes the best—and ultimately only—prospect for humanity to achieve its cosmic potential. Sir Fred Hoyle put it nicely in 1983:

Many are the places in the Universe where life exists in its simplest microbial forms, but few support complex multicellular organisms; and of those that do, still fewer have forms that approach the intellectual stature of man; and of those that do, still fewer again avoid the capacity for self-destruction which their intellectual abilities confer on them. Just as the Earth was at a transition point 570 million years ago, so it is today. The spectre of our self-destruction is not remote or visionary. It is ever-present with hands already upon the trigger, every moment of the day. The issue will not go away, and it will not lie around forever, one way or another it will be resolved, almost certainly within a single human lifetime.

The current generation is likely to live to the 500-year jubilee of De revolutionibus orbium coelestium in 2043. Let’s hope that, by then, we will have completed the Copernican revolution and embraced the hard and deep problems that modern astrobiology is posing. We are now living at the tipping point—the very moment when firm empirical resolution of our biggest and oldest puzzles is in sight. We should not miss that opportunity by fighting for an outdated vision of ourselves as pinnacles of complexity in the universe. Instead, we should reason as if we were near typical for our given epoch. Only then we shall have a fighting chance of piercing the Great Silence.

Milan Ćirković is a senior research associate at the Astronomical Observatory of Belgrade and an assistant professor in the Department of Physics at the University of Novi Sad in Serbia and Montenegro.