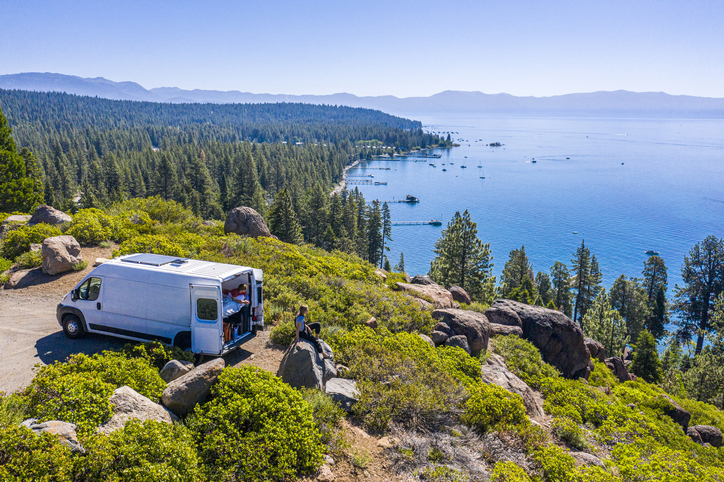 Nomadic tribalism in a car, van or RV can be a way to prevent homelessness and live more sustainably. Photo by adamkaz/Getty Images

If you look closely on city streets, campgrounds and stretches of desert run by the Bureau of Land Management, you’ll see more Americans living in vehicles than ever before. It was never their plan.

“I wasn’t prepared when I had to move into my SUV. The transmission was going. I had no money saved. I was really scared,” said April Craren, 52, bundled in blankets atop a cot inside her new minivan, a 2003 Toyota Sienna.

She flipped the camera on her phone to show me the camp stove she uses to make coffee and her view of the sun rising over the Colorado River. She has no toilet, shower or refrigeration.

After separating from her husband, April found herself homeless in June 2020, exacerbating the depressive disorder for which she receives $1,100 a month in disability benefits.

“I could have gotten an apartment but in a crappy unsafe place with no money to do anything at all,” she explained.

Last year, where April lived in Nixa, Missouri, the average rent for an apartment was $762, slightly less than the national average. Like nearly half of American renters, she would have been crippled by the cost.

It’s not surprising, then, that job loss, divorce or, say, the sudden onset of a global health or financial crisis can push so many over the edge.

“If the Great Recession was a crack in the system, Covid and climate change will be the chasm,” says Bob Wells, 65, the nomad who plays himself in the film Nomadland, an early Oscar contender starring Frances McDormand. Bob helped April to adopt the nomad way of life and change her life in the process.

Today, he lives exclusively on public lands in his GMC Savana fitted with 400 watts of solar power and a 12-volt refrigerator. His life mission is to promote nomadic tribalism in a car, van or RV as a way to prevent homelessness and live more sustainably.

Before becoming a nomad in 1995, Bob lived in Anchorage, Alaska, with his wife and two boys. He worked as a union clerk at the same Safeway where his father had worked until retirement, only to die two years later.

Bob didn’t want his father’s fate, but there he was. As days became decades, he went to a job he hated, worked with people he didn’t like, to buy things he didn’t want. By his own telling, he was the living embodiment of Thoreau’s “quiet desperation”. He knew he wasn’t happy, but it never occurred to him to live differently.

After all, this was the American dream, right?

Then, when he was 40 years old, the divorce happened. After paying alimony and child support, he was taking home $1,200 a month, $800 of which went towards rent.

One day, fretting about impossible finances, he saw a green box van for sale and thought: “Why don’t I buy that van and move into it?” The idea struck him as crazy, but with the prospect of homelessness closing in, he drained the last $1,500 in his savings account and bought the van that was just “too ratty-looking” for its previous owner. He gave his landlord notice that night, threw a sleeping pad in the back of his new home, and cried himself to sleep.

Then came the first of the month, and something clicked: he didn’t have to pay rent. As his finances improved, he installed insulation, a proper bed, even a dream-come-true PlayStation fortress for his boys. He started working only 32 hours a week, and since every weekend was a three-day weekend, he spent more time camping with his kids, which “tremendously helped” his mental outlook on life.

Finally, he was truly happy.

Realizing he had something valuable to share, he bought the domain name Cheap RV Living in 2005. He posted tips and tricks about better vehicle-dwelling, but what he was really offering was a road map to a better life.

Four years later, when close to 10 million Americans were displaced after the Great Recession, traffic to his site exploded. Finding himself at the center of a growing online community, he decided to create a meet-up in Quartzsite, Arizona. He dubbed it the Rubber Tramp Rendezvous (RTR), and in January 2011, 45 vehicles showed up. Eight years later, an estimated 10,000 vehicles convened for what was said to be the largest nomad gathering in the world.

The event’s explosive growth is undoubtedly a reflection of America’s increasing interest in van life as an answer to the affordable housing crisis, an idea made accessible by Bob on his YouTube channel, also named Cheap RV Living, created in 2015.

Whether he’s sharing a philosophical exploration, as in Why I Live in a Van, or explaining the mechanics of Pooping in a Car, Van, or RV, Bob’s videos are a prized free resource, making him a beloved celebrity in the nomad community. With 460,000 subscribers, the videos are also making him money via ad and affiliate sales. His most popular video, Living in a Car on $800 a month, has more than 4m views.

Fame, however, isn’t Bob’s jam. He doesn’t like the term “follower” and definitely doesn’t want to be thought of as a guru. Rather, he’s driven by a quieter demon-cum-angel. After the devastating loss of his eldest son in 2011, he was plagued by despair and, for the first time, suicidal thoughts.

“Why am I alive when my son isn’t?” he asked himself obsessively.

With a desperate plea to a higher power, he finally found the will to bear the pain by being of service and building a community.

“If I’m going to be alive, there’d better be a reason, and this is the reason. You are the reason,” he said to a crowd at the RTR in 2020, in what was published later as a video about mental illness for his online audience.

The culmination of this drive to serve is the Home on Wheels Alliance (Howa), a charitable 501(c)(3) non-profit he founded in 2018. With the help of his team and volunteers, Bob helps advance clients who are being squeezed out of traditional housing from a state of crisis to financial stability to finally being contributing members of the mobile community.

To date, funded by sponsors and donations, Howa has given away seven minivans, two trailers, one skoolie (a converted school bus) and too many tents, brake pads and tires to count.

April had been watching Bob’s videos for years when a nomad friend online suggested she apply to Howa for assistance.

“That’s really for someone more needy,” she replied.

At the time, she was living in her car with the faulty transmission.

“When I found out I was awarded the minivan, that changed everything,” she said.

To join Howa’s program, April had to sign a three-year contract, prove she had sufficient income to regularly maintain her vehicle, and agree to put $200 a month in an escrow account until she reached the value of the minivan, after which the vehicle title and escrow account would be released to her.

“Most of Howa’s applicants are older women. They’re disabled, or retired and divorced without sufficient SSI [supplemental security income] because they were homemakers, or simply don’t earn enough to afford rent,” Bob explained.

By learning to save money and live rent-free in their vehicles, Howa’s clients preserve their independence, self-sufficiency and dignity while also making friends within the larger nomad community.

Today, April camps on public land alongside Cliff, a veteran nomad and Howa volunteer. Together, they make runs to a nearby laundromat, grocery store and gym where she works out and showers. She’s lost 20lb and feels healthier, thanks to eating fresh foods at Cliff’s urging and living a more active outdoor lifestyle.

After Covid, she’d like to volunteer and join a caravan, a popular program Howa organized to help nomads stay safe and fend off loneliness. Howa vets establish camping locations and then members use Meetup to learn where groups are headed. Some caravans are small, while others have gotten as big as 45 rigs.

Expecting homelessness to continue rising, in part due to climate disaster, Bob’s dream for the tribe is to see the expansion of Long-Term Visitor Land (LTVA), including areas in national forests. Most public lands allow visitors to camp for only two weeks, but LTVA campers can stay for as long as seven months. These campgrounds don’t offer hookups – most nomads use solar power, anyway – though a few do have dump stations and fresh water.

“Thousands of nomads could winter in the south and summer in the forest for longer stretches of time,” he explained.

While Bob concedes the limits of his solution – it doesn’t address PTSD, mental illness or drug addiction, three main causes of homelessness – he does see it as a way to lower our carbon footprint and make ourselves more financially resilient in trying times ahead.

“I want to leave a world behind that’s habitable. For every person I’m able to help into a vehicle, that’s one less person in a house,” he reasoned.