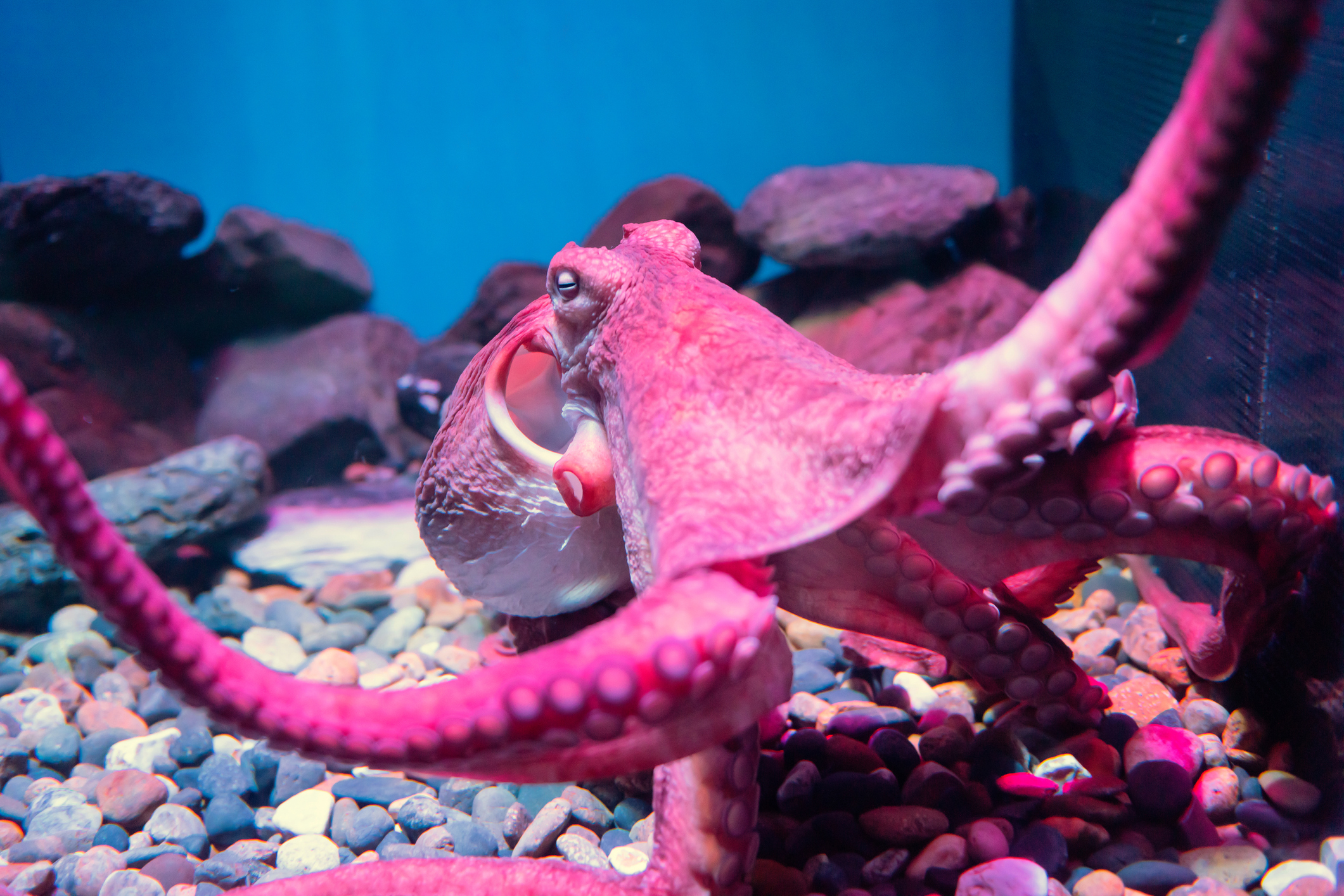 When the California two-spot octopus isn’t attempting to bring more eight-legged cephalopods into this world, it prefers to be alone. Known to scientists as Octopus bimaculoides, the alien-like invertebrate spends most of its time hiding or searching for food, asocial males avoiding asocial females until their biological clocks say it’s time to partner up. That is, until they are on MDMA. In a groundbreaking study, researchers described how octopuses on the drug act similarly to a socially anxious human on MDMA: They open up.

Gül Dölen, Ph.D., is an assistant professor of neuroscience at Johns Hopkins University and the co-author of the 2018 Current Biology paper. She tells Inverse that when octopuses are on MDMA, it’s like watching “an eight-armed hug.”

“They were very loose,” Dölen says. “They just embraced with multiple arms.”

While MDMA is known to trigger prosocial behavior in mice and humans, it has never been witnessed in invertebrates, animals that have no backbone. Vertebrates and invertebrates have wildly divergent bodies and brain structures, and for a long time scientists didn’t think the latter had the capacity to be social. They only recently realized invertebrates deserved a second look.

Because of improvements in molecular genetic analysis, Dölen explains, we’re beginning to understand the ways in which both groups evolved from a common ancestor. The findings of the study add evidence to the idea that social behaviors have a long evolutionary history — going back much farther than we ever believed. The electrifying results could significantly impact what we know about the evolution of brains and why MDMA-assisted therapy seems to be such a useful tool in treating post-traumatic stress disorder and anxiety.

“After the MDMA, it was like an eight-armed hug.”

An octopus differs from a human in ways far beyond the obvious. A heap of no bones and 33,000 genes, octopuses are believed to be Earth’s first intelligent beings. They are utterly different from all other animals, with a central brain that surrounds the esophagus and two-thirds of their neurons in their arms. They’re separated from humans by more than 500 million years of evolution. But despite the differences between octopuses and humans, Dölen and her colleague Eric Edsinger, Ph.D., a research fellow at the University of Chicago’s Marine Biological Laboratory, choose to focus on a single crucial similarity. The brain of the California two-spot octopus contains a serotonin transporter that enables the binding of MDMA — much like human brains.

This means that serotonin — believed to help regulate mood, social behavior, sleep, and sexual desire — is an ancient neurotransmitter that’s shared across vertebrate and invertebrate species. Dölen and Edsinger hypothesized this before the octopuses were ever bathed in MDMA.

“We needed to check the genome to make sure that the genes that encode the serotonin transporter, which is the protein that MDMA binds to, was still a binding site in octopuses even despite the fact that so much evolutionary time had passed,” Dölen explains.

“We performed phylogenetic tree mapping and found that, even though their whole serotonin transporter gene is only 50 to 60 percent similar to humans, the gene was still conserved. That told us that MDMA would have a place to go in the octopus brain and suggested it could encode sociality as it does in a human brain.”

That’s a revolutionary suggestion because scientists only very recently began to accept that invertebrates are even capable of being social. After all, without MDMA, California two-spot octopuses prefer to be loners. In a 2017 study in the Journal of Experimental Biology, researchers from Queen Mary University of of London wrote the possibility that invertebrates could have emotions has “traditionally been dismissed by many as emotions are frequently defined with reference to human subjective experience, and invertebrates are often not considered to have the neural requirements for such sophisticated abilities.”

But recent studies, illustrating a shift in thinking, have shown that invertebrates like sea slugs, bees, and crabs all display various cognitive, behavioral, and phsyiological phenomena that suggest internal states reminiscent of emotions.

This is why the fact that octopuses can bind serotonin is so important. Serotonin is a key mitigator of the emotional aspects of human behavior and sociality. That octopuses, one of the most advanced invertebrates, have a similar pathway geared toward social behavior despite the fact that their brains are organized very differently suggests that sociality is spread across the animal kingdom.

“There have been studies showing that serotonin is important for social behaviors for both invertebrates and vertebrates, and this really confirms to me that it’s true that serotonin is conserved across hundreds of millions of years of evolution,” says Dölen.

This became clear when she observed how octopuses acted after they were bathed in MDMA. Individual octopuses were put into the middle zone of a glass aquarium that was divided into three. From the middle zone, the subject octopus had the option to move into the zone on either side of it. On one side, there was another octopus in a cage, and on the other, there was a “novel toy object” (a Stormtrooper figurine). Sociality was measured by the number of seconds the subject octopus spent on the side with the caged octopus compared to the Stormtrooper side. Five octopuses were used in the control experiment, and four were used during the MDMA trial.

They would “push against the wall and sort of delicately touch the container that had the octopus in it,” says Dölen.

But when these octopuses were on MDMA, they were not delicate with their movements toward the caged individuals. After being placed in a bath with MDMA for 10 minutes, and then washed with saline for 20 minutes,, and they re-entered the three-zone aquarium. This time around, they spent significantly more time with the other octopus, whether it was male or female, and the eight-armed hugging commenced.

“This paper is welcomed, as the behavioral neuroscience of cephalopods is very understudied,” Dalhousie University invertebrate behavioral physiologist Shelley Adamo, Ph.D., who was not involved with the current paper, tells Inverse. Adamo also studies the interactions between behavior and physiology in invertebrate model systems. “We know little about how their brains work. This paper breaks new ground by examining the underlying molecular basis of at least one neurotransmitter system.”

But she also cautions that it’s too early to jump to conclusions because the paper’s evidence that “the octopus were engaging in ‘social’ behaviors is not especially strong.” There could be alternative explanations for all that friendliness. Maybe the drug altered their foraging behavior and the target octopus “smelled” like food (cephalopods are occasionally cannibalistic). Maybe the MDMA changed their typical hunting behavior, and being hungry could explain why both male and female octopuses were interested in the target.

“As with most interesting papers, it raises a number of questions: What would two octopus do if they were both on MDMA and they could contact one another?” Adamo asks. “The small sample size — a necessary evil for most studies on cephalopods — means that the data is not as robust as it could be.”

Dölen has two hypotheses to explain what happened. Qualitatively, it looks like octopuses on MDMA, much like humans, could just like touching in general,, and the octopus in the cage “is the most interesting object that an octopus would want to touch.” Or it could be that the drug really does make them social. The latter, she believes, is the most robust hypothesis: MDMA affects human interest in social touch as well, and that seems to be preserved in octopuses as well.

“What this says to me is that in the brain of an octopus, the neural circuits and transmitters that are required for social behavior must exist,, and they are just suppressed most of the time,” says Dölen. “Octopuses appear to suspend their asociality during important mating periods through a suppression mechanism in their brain.”

The MDMA used in the study was provided by the Multidisciplinary Association for Psychedelic Studies (MAPS), the nonprofit organization that funds the FDA-approved Phase 3 clinical trials of MDMA-assisted psychotherapy in patients with severe PTSD. This research, Dölen says, has intrigued MAPS founder Rick Doblin, and with good reason. It suggests that perhaps the best way to gain insight into MDMA’s mechanisms and therapeutic importance isn’t by taking an fMRI picture of the brain and examining the regions it activates, which has been standard practice in MDMA research. From Dölen’s point of view, the fact that octopuses don’t have the the same brain regions as humans but still carry the genes that enable MDMA binding means that molecular and cellular information is going to be more useful than anatomical data.

“Octopuses don’t have the same parts of the brain that we think are important for social behavior, a region called the nucleus accumbens,” says Dölen.

“What we’re arguing is that the brain regions don’t matter. What matters is that they have the molecules, the neurotransmitters, and some configuration of neurons. They have the serotonin transporter,, and that’s enough.”