The world seems to be getting more empathetic. Americans donate to charity at record rates. People feel the pain of suffering in geographically distant countries brought to our attention by advances in communications and transportation. Violence, seen on historical timescales, is decreasing.

The great modern humanitarian project of expanding the scope of our empathy to include the entire human race seems to be working. Our in-group (those we choose to include in our inner circle and to spend our energies on) is growing, and our out-group (everybody else) shrinking. But there’s a wrinkle in this perfect picture: Our instinctive tendency to categorize the world into “us” and “them” is difficult to overcome. It is in our nature to favor helping in-group members like friends, family, or fellow citizens, and to neglect or even punish out-group members. Even as some moral circles expand, others remain stubbornly fixed, or even contract: Just think of Democrats and Republicans, Sunnis and Shiites, Duke and North Carolina basketball fans. 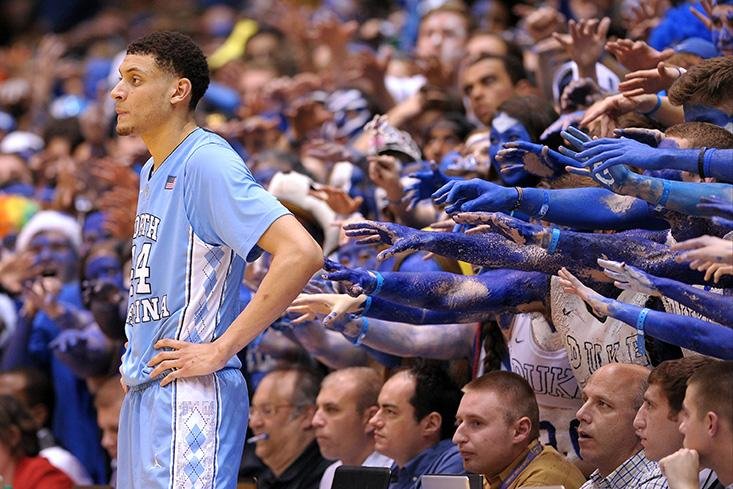 Us and Them: Sometimes, punishment of an out-group is taken to colorful extremes. Here, fans of the Duke Blue Devils try to distract Justin Jackson of the North Carolina Tar Heels during a 2016 game. This time, it didn’t work—UNC defeated Duke 76-72. Photo by Lance King/Getty Images

The endpoint of the liberal humanitarian project, which is universal empathy, would mean no boundary between in-group and out-group. In aiming for this goal, we must fight our instincts. That is possible, to a degree. Research confirms that people can strengthen their moral muscles and blur the divide between in-group and out-group. Practicing meditation, for example, can increase empathy, improving people’s ability to decode emotions from people’s facial expressions1 and making them more likely to offer a chair2 to someone with crutches. Simply increasing people’s beliefs in the malleability of empathy increases the empathy they express toward ideologically and racially dissimilar others.3 And when all else fails, people respond to financial gain. My co-authors and I have shown that introducing monetary incentives for accurate perspective-taking increased Democrats’ and Republicans’ ability to understand each other and to believe that political resolutions were possible.4

But these exercises can take us only so far. In fact, there is a terrible irony in the assumption that we can ever transcend our parochial tendencies entirely. Social scientists have found that in-group love and out-group hate originate from the same neurobiological basis, are mutually reinforcing, and co-evolved—because loyalty to the in-group provided a survival advantage by helping our ancestors to combat a threatening out-group. That means that, in principle, if we eliminate out-group hate completely, we may also undermine in-group love. Empathy is a zero-sum game.

Absolute universalism, in which we feel compassion for every individual on Earth, is psychologically impossible. Ignoring this fact carries a heavy cost: We become paralyzed by the unachievable demands we place on ourselves. We can see this in our public discourse today. Discussions of empathy fluctuate between worrying that people don’t empathize enough and fretting that they empathize too much with the wrong people. These criticisms both come from the sense that we have an infinite capacity to empathize, and that it is our fault if we fail to use it.

In 2006, then-Senator Barack Obama spoke at Northwestern University’s commencement bemoaning the country’s “empathy deficit” and urging people “to see the world through those who are different from us.” Several studies supported Obama’s concern: People in the 21st century exhibit less empathy5 and more narcissism6 than in decades past. A torrent of think-pieces have lamented and diagnosed this empathy decline.

And then the pendulum swung back. People do care, newspaper editorialists and social-media commenters granted. But they care inconsistently: grieving for victims of Brussels’ attacks and ignoring Yemen’s bombing victims; expressing outrage over ISIS rather than the much deadlier Boko Haram; mourning the death of Cecil the Lion in Zimbabwe while overlooking countless human murder victims. There are far worthier tragedies, they wrote, than the ones that attract the most public empathy.

Almost any attempt to draw attention to some terrible event in the world elicits these complaints, as though misallocated empathy was more consequential than the terrible event itself. If we recognized that we have a limited quantity of empathy to begin with, it would help to cure some of the acrimony and self-flagellation of these discussions. The truth is that, just as even the most determined athlete cannot overcome the limits of the human body, so too we cannot escape the limits of our moral capabilities. We must begin with a realistic assessment of what those limits are, and then construct a scientific way of choosing which values matter most to us.

We can and do override our moral instincts using our more logical and deliberative mode of thinking, so the in-group vs. out-group opposition is not absolute. But we have limited cognitive resources, which rapidly become depleted. For example, keeping a nine-digit insurance policy number in mind without writing it down requires working memory, and can impair our ability to recall other information, like the phone number of the insurance agent. Similar constraints cause what is known as decision fatigue: Deliberating over an initial series of decisions can inhibit thoughtfulness in later decisions, as observed in judges deciding whether to grant prisoners parole earlier and later in the day.7 Similarly, full compassion requires inhibitory control (regulating our own emotions to distinguish them from another person’s emotions), self-reflection, externally focused attention, and recognition of another person’s suffering. These faculties, too, can tire.

A data-based approach to identifying and ranking universal values calls on us to make use of the limits on morality that are inherent to all of us as human beings.

Morality can’t be everywhere at once—we humans have trouble extending equal compassion to foreign earthquake victims and hurricane victims in our own country. Our capacity to feel and act prosocially toward another person is finite. And one moral principle can constrain another. Even political liberals who prize universalism recoil when it distracts from a targeted focus on socially disadvantaged groups. Empathy draws our attention toward particular targets, and whether that target represents the underprivileged, blood relatives, refugees from a distant country, or players on a sports team, those targets obscure our attention from other equally (or more) deserving ones.

That means we need to abandon an idealized cultural sensitivity that gives all moral values equal importance. We must instead focus our limited moral resources on a few values, and make tough choices about which ones are more important than others. Collectively, we must decide that these actions affect human happiness more than those actions, and therefore the first set must be deemed more moral than the second set.

Once we abandon the idea of universal empathy, it becomes clear that we need to build a quantitative moral calculus to help us choose when to extend our empathy. Empathy, by its very nature, seems unquantifiable, but behavioral scientists have developed techniques to turn people’s vague instincts into hard numbers. Cass Sunstein of Harvard Law School has suggested that moral concepts like fairness and dignity can be assessed using a procedure he calls breakeven analysis. Do people feel that the benefits of a given course of action justify the costs? If so, the action is worth taking. For example, we may judge that invasive phone-hacking is moral if the cost of invasion of privacy is countered with the benefit of preventing one terrorist attack at some minimum frequency, say, every five and a half years.

Basing our moral criteria on maximizing happiness is not simply a philosophical choice, but rather a scientifically motivated one: Empirical data confirm that happiness improves physical health, enhancing immune function and reducing stress, both of which contribute to longevity. Shouldn’t our moral choice be the one that maximizes our collective well-being? These data sets can give us moral “prostheses,” letting us evaluate different values side-by-side—and helping us to discard those lesser values that obstruct more meaningful ones. The only wrong choice when it comes to morals is “all of the above.” 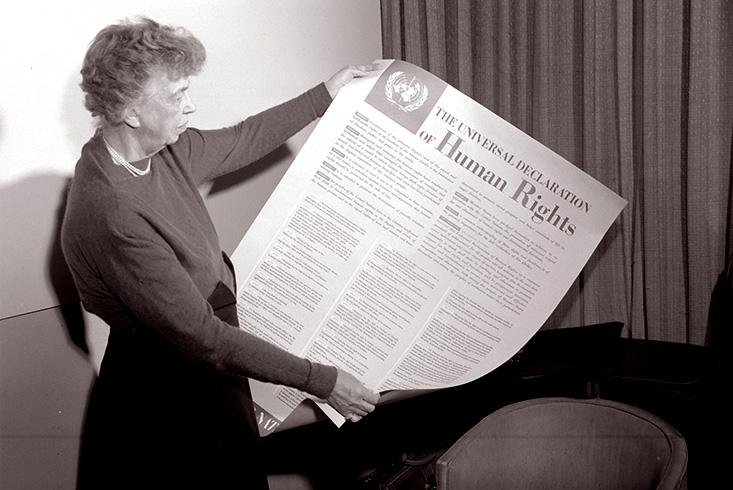 These approaches can help us create a universal moral code—something that can serve as a moral guide in all cases, even if we are not able to actually apply it to all people all the time. Indeed, numerous scientifically rigorous descriptive theories of universal values already exist: Shalom Schwartz’s theory of basic values and Jonathan Haidt and colleagues’ Moral Foundations Theory, among others. We’ve tried to create a universal code before: In 1946, the United Nations established an 18-member committee of varying nationalities to formulate the Universal Declaration of Human Rights. Two additional U.N. committees reviewed the draft before the General Assembly voted to adopt it in 1948. Still, it relied on the opinions of elites rather than of a broader populace. Today, we could take a more data-driven approach.

As a case study, take Apple’s battle with the FBI over unlocking an iPhone belonging to one of the San Bernardino shooters. The FBI requested that Apple circumvent the iPhone’s encryption that protects the user’s personal data (before ultimately doing so itself). The case pitted personal security (protection from government surveillance) against national security (determining whether the San Bernardino attack involved coordination with ISIS). The balance is a difficult one to strike, and it was largely argued in an adversarial way that magnified differences of opinion.

We could be more systematic. We could use a standardized score to examine how violations of personal security and national security affect happiness. This could allow us to state that certain values are more universal than others, and are therefore more central to human well-being. Such an effort could tell us, perhaps, that on average the anxiety people feel regarding the possibility of the government reading their text messages is greater than the distress caused by experiencing or anticipating a terrorist attack. If so, Apple would emerge as more “morally right” than the FBI (or vice versa).

A data-based approach to identifying and ranking universal values is ambitious to be sure. But, crucially, it calls on us to make use of the limits on morality that are inherent to all of us as human beings, rather than lamenting them. These constraints challenge us to focus our attention, and drive us to see that not all values are equally valid. Instead of indefinitely fighting over tradeoffs between in-group- and out-group-oriented moralities, we might find that picking among universally held values is more palatable, efficient, and uniting—providing a moral function in and of itself. In place of the usual, default concentric circles of in-groups that guide us today (family, friends, neighbors, citizens) we would have the tools to carefully engineer to whom we should extend our empathy, and when.

Think of the great progress physicists made when they acknowledged the limitations of the physical world—nothing can move faster than light, or be perfectly localized in the subatomic realm. Similarly, we will make our greatest moral progress when we accept and work within the limitations of human moral cognition, and forego an unrealistic concern for respecting difference and moral diversity at any cost.

Adam Waytz is a social psychologist and professor at Northwestern University’s Kellogg School of Management. He studies humanization, dehumanization, and the moral implications of these processes.