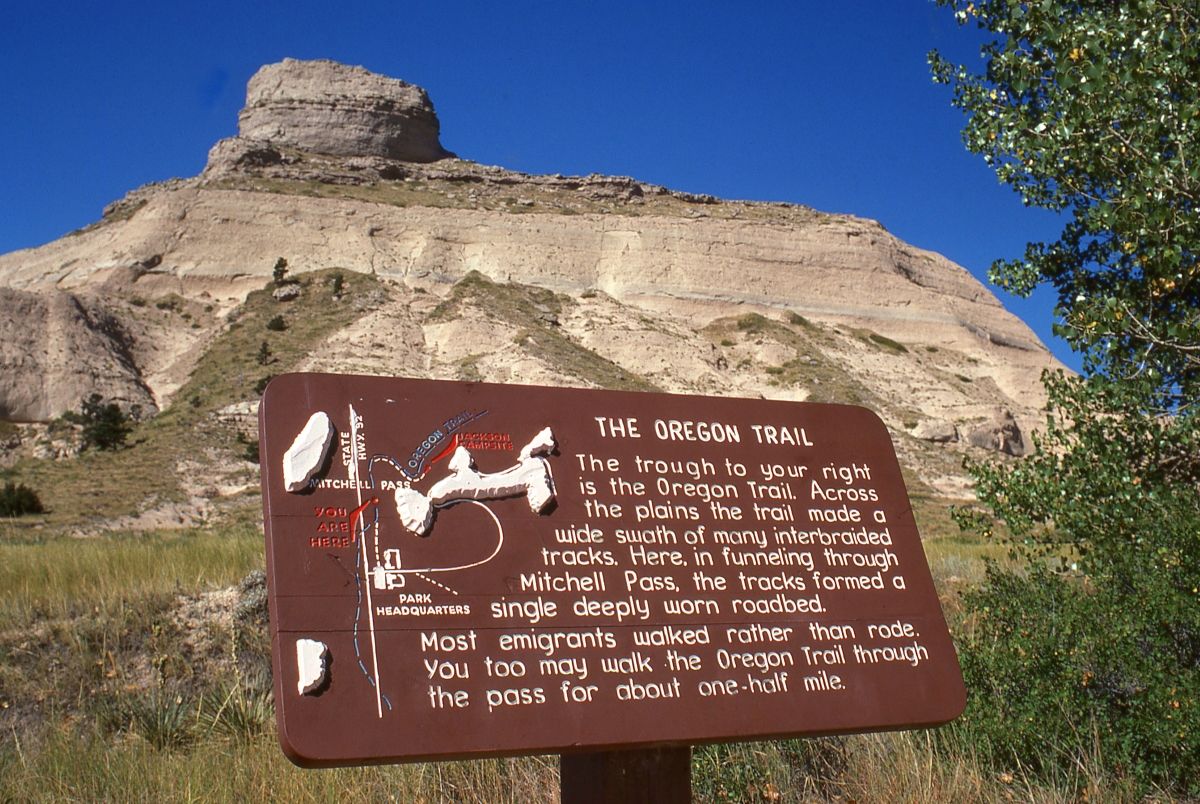 Any child of the 1980s is familiar with the basic skeleton of the Oregon Trail, from the celebrations warranted by a sight of Chimney Rock to the dangers of running a team of oxen at a grueling pace with meager rations. But even devoted players of the classic computer game, which turned 45 in 2016, may not know that relics of the trail itself are still carved into the landscapes of the United States.

The trail itself—all 2,170 miles of it—was braved by more than 400,000 people between 1840 and 1880. Weighed down with wagons and their pesonal possessions, the pioneers that dared travel the Oregon Trail slowly helped build the United States' western half. The trail began in Independence, Missouri, and continued to the Willamette Valley in Oregon, where pioneers could decide to either stay put or continue north or south and settle.

As the Oregon Trail evolved, thousands of wagons wore ruts into the ground that acted as an ad-hoc road for the settlers who followed. But they didn’t follow a single solid path. Rather, wagon wheels left ruts across the country as pioneers found various shortcuts and easier routes along the way. Many of those ruts still exist today, though some of them are in danger of destruction as municipalities push to stretch bigger and better power supplies across the region.

So caulk those wagons and get ready to ford the river. Follow this modern-day journey, stopping to see trail relics along the way—with no need to worry about typhoid fever or dysentery.

These ruts are not so obvious to the untrained eye—the site is a swale, or a sunken trail eroded into the hillside, caused by wet wagon wheels coming out of the Big Blue River. This was the first river crossing pioneers hit on the trail; they often had to camp here and wait for the river to reach the right height to cross.

This spot’s unique rock formations, waterfall, and natural spring were a favorite stopping point for pioneers after crossing the Big Blue River. Many wanted to leave their mark and carved their names into the rocks around the spring—including Edwin Bryant, a member of the famously doomed Donner-Reed Party. According to Bryant, his group actually named the area “Alcove Springs” and carved the name into the rocks and surrounding tree trunks.

Pioneers faced a hefty climb up California Hill after crossing the South Platte River. Right after reaching the other side of the water, wagons had to drive up 240 feet in a little more than a mile and a half, leaving deep ruts up the hill that are still visible today. Almost everyone on the Oregon Trail had to take this route, and California Hill was the first major climb they encountered on the trail.

Pristine trail ruts stretch 1,600 feet through the countryside here at Rock Creek Station. The spot was originally established as a supply stop and eventually became a Pony Express station. A toll bridge built specifically for the pioneers crossed a creek here—before the bridge, travelers had to lower their wagons into the creek and hoist them out. The bridge solved the problem, allowing settlers to skip the heavy lifting while paying 10 to 50 cents to cross at road level; the toll was based on load size and ability to pay.

The tracks at Guernsey are among the most impressive remnants of Oregon Trail history. Almost every pioneer had to pass through the same spot here, going over soft sandstone. Over time, each wagon wore down the rock a bit more...and more...and more. The ruts eventually became five feet deep, and visitors can walk through them for a real pioneer experience. South of Guernsey is Register Cliff, where many pioneers carved their names into the rock to document their passage.

Many pioneers passing by Independence Rock stopped here to carve their names into the granite, earning it a title of one of the “registers of the desert," given by Father Peter J. DeSmet in 1840. The landmark was christened Independence Rock in 1830 when William Sublette passed through with his wagon train, noting he’d made it there by July 4—if wagon trains didn’t make it by then, they weren’t likely to reach their final destination by winter.

Until 1852, when the McAuley Road cutoff was blazed, pioneers had to face the challenge of Big Hill. The longest, steepest climb on the Oregon Trail, the hill had an even more dangerous descent. Tracks are still visible going up the hill, and are also visible on the way back down, into Bear River Valley. They’re best viewed a bit farther away from the highway—up close you don’t see the magnitude of what the pioneers endured on this part of the trail.

Just below the modern-day National Historic Oregon Trail Interpretive Center on Flagstaff Hill—where pioneers got their first glimpse of the Baker Valley—seven miles of wagon ruts are visible across the ground. This site has what might be the first passing lanes in the west; some of the ruts run parallel to one another, implying that some wagons passed others going slower in order to get to Powder River first.

Along the freeway here, an Oregon Trail historic sign sits on a cliff face next to one of the final sets of wagon ruts along the route to Columbia. These stretch up a hill on the side of the road and go along the cliff for about a mile, leading to an impressive view of the Columbia River.

Jennifer Billock is an award-winning writer, bestselling author, and editor. She is currently dreaming of an around-the-world trip with her Boston terrier.