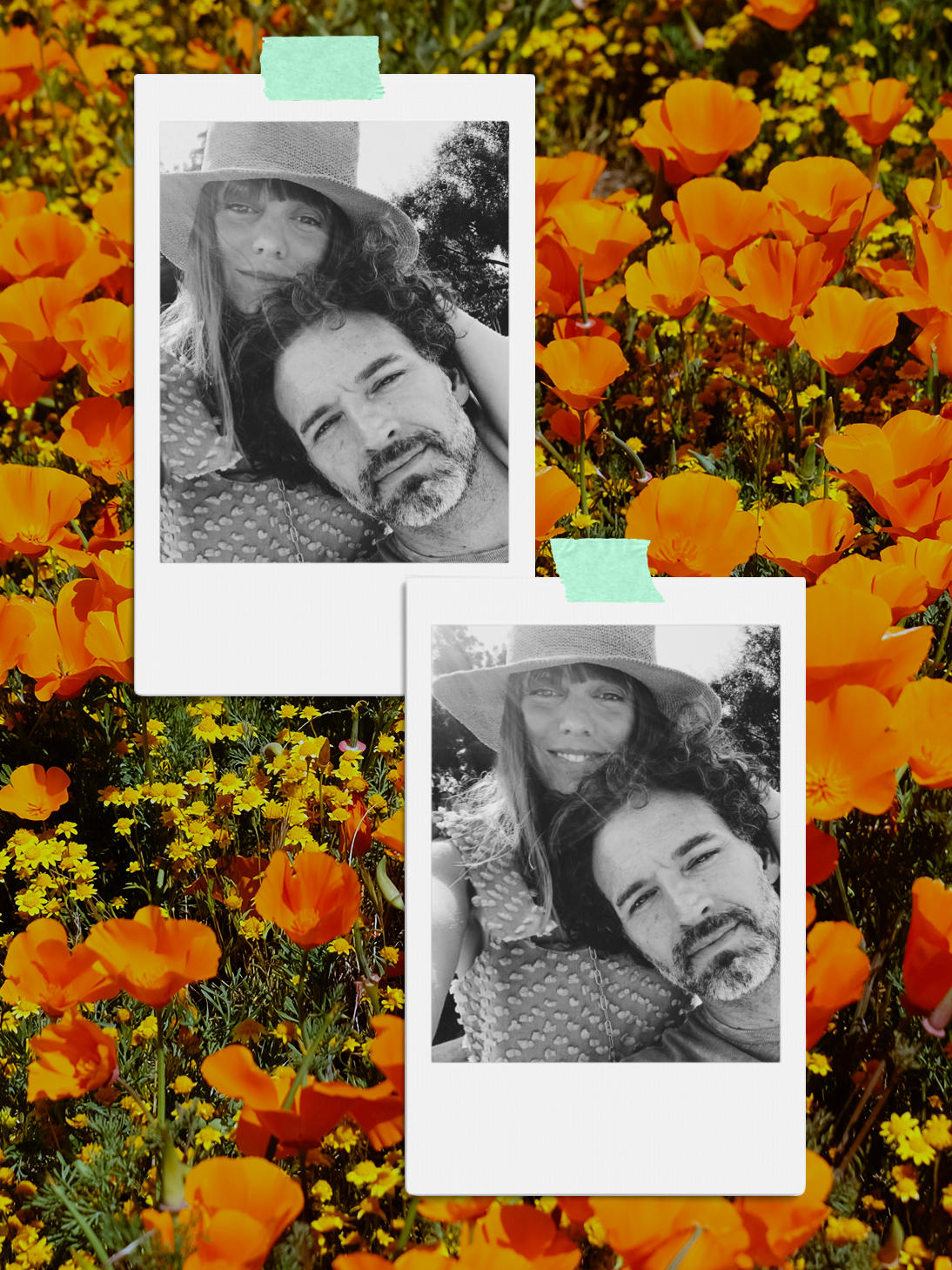 Like the rest of Tessa Neustadt’s 76,000 Instagram followers, we consider the interiors photographer’s account an ultimate source of inspiration. Recently, though, we discovered something totally different on her feed.

A few weeks ago, Neustadt took to her Instagram Stories to open up about her relationship with fellow photographer and her boyfriend of four years, Chris Nowling. The topic at hand? They sleep in separate bedrooms.

We were instantly intrigued. How does it work? Why does it work? Who gets the bigger room? Do they ever get lonely? Curious to know more, we spoke with the couple about their unique sleeping situation in their three-bedroom, two-bath house in Los Angeles’s Eagle Rock neighborhood. Here, they open up about how the arrangement came to be, a typical night at home, and the fact that spreading out has only made their relationship stronger.

On the Most Pressing Question of All: Why?

Tessa Neustadt: It’s funny. We never had a conversation about the separate bedrooms at any point. When Chris first bought the house, I was spending most of my time over here and we just never slept in the same bed. We have different sleeping patterns: He’s more of a night owl; I like going to bed a bit earlier. I also have a bad habit of falling asleep to Netflix, and he hates that.

Chris Nowling: I need darkness and silence to sleep. It’s kind of funny; she sent me a link to this projector that you connect to your phone and it projects whatever you’re showing on your phone onto the ceiling so you can watch TV while you fall asleep. I thought she was half kidding.

Neustadt: I thought it was awesome.

Nowling: It’s a short-list birthday present for sure. I guess I’ve never put a beneficial value on sweating next to somebody for eight hours.

Neustadt: It’s not that we’re not comfortable together, though.

“If you can sleep well, then you’re happier the next day, and I think that can help strengthen the relationship.”—Tessa Neustadt

On a Typical Night (and Morning)…

Nowling: We’ll usually eat dinner together, watch a show or two on the television, and walk the dogs. I like to shower before I go to bed. Tessa has her own little regimen.

Neustadt: He’s usually on his computer working and editing photos. I like to come in and hang out in his bedroom at night for, I don’t know, 10 or 15 minutes and play with the dogs. Then kind of just have a little…

Neustadt: We’ll say goodnight, and I’ll go to my little wing of the house. I think having our own bathrooms adds to the separateness. If we shared the same bathroom, his showering at night and getting out of bed early in the morning would wake me up a lot.

Nowling: Once you’re up, you’re up.

Neustadt: It’s a big thing. I can’t fall back asleep.

Nowling: It’s fun to wake up and meet for breakfast. You’re not getting out of the same space; you’re meeting in a common area for coffee or toast.

Neustadt: We text each other in the morning to see if the other person is awake. Like yesterday, I was like, “Are you awake?” and he was like, “Yeah.” So I came in and got in bed with him and the dogs.

“It never occurred to me that you have to sleep together for the relationship to be strong. For us, it’s almost the opposite.”—Chris Nowling 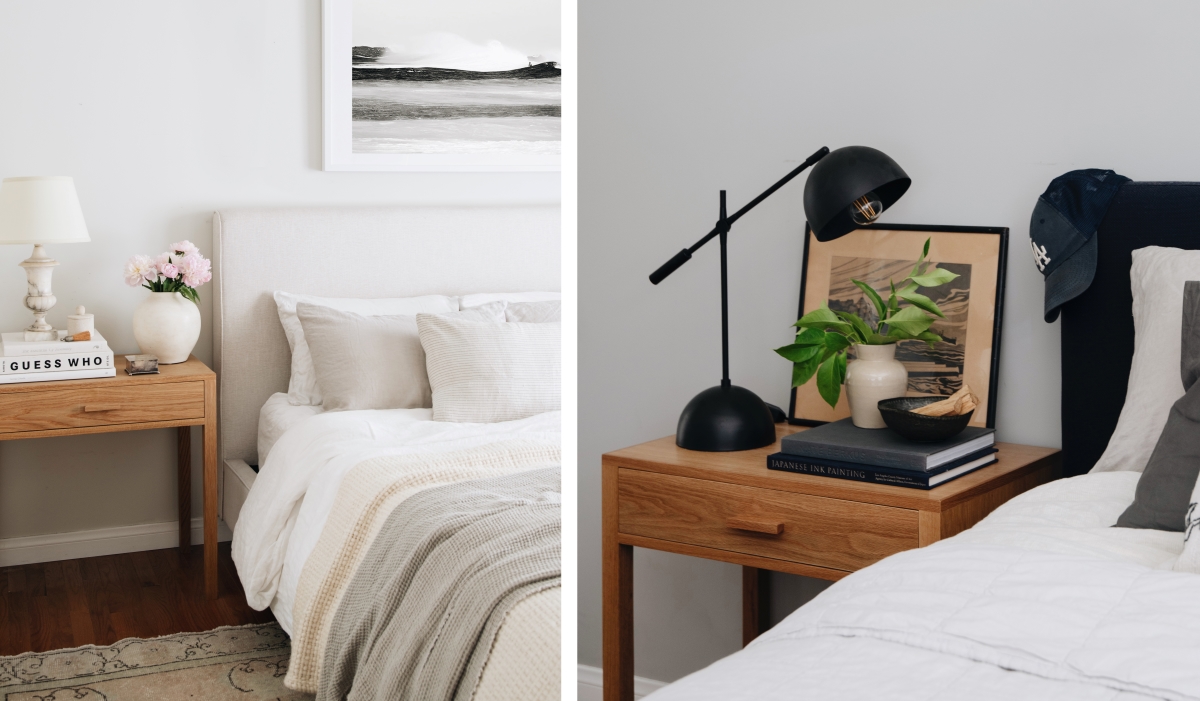 Neustadt: I furnished both of our rooms, so there’s that! I got him a navy upholstered bed frame and a dark wood dresser. In my room, I have a light linen bed frame. We both have the same nightstands, which are the ones that I designed. I would say my room is lighter and airier.

Nowling: She has the smaller room.

Neustadt: And mine typically has clothes all over it, which he hates.

“When we can share a bed and our sleep isn’t disrupted, then it’s fun. It feels like a treat.”—Tessa Neustadt

Nowling: When we go on vacation, we sleep in the same bed.

Neustadt: It has to be a king. We were actually just on a little mini vacation in Santa Barbara, and we had a king-size bed and slept next to each other for two nights.

Nowling: It was great.

Neustadt: It’s like a little sleepover. When we go and stay at his mom’s house in the summer, she has two full-size beds pushed together. That’s our dream. They’re pushed together, but if he moves or gets out of bed I don’t feel a single thing because they’re separate mattresses. When we can share a bed and our sleep isn’t disrupted, then it’s fun. It feels like a treat.

On the Mixed Responses They’ve Received From Friends (and Strangers)…

Neustadt: For the first year that we were living together, I was embarrassed that we had separate bedrooms because I would get a lot of negative responses. When I’m with Chris on set and he’s talking to guys, their response is typically, “Whoa, awesome. How’d you get that to happen?” They’re excited for him—and jealous. When I tell women, they think I’m sad or that something is wrong with our relationship.

Nowling: It never occurred to me that you have to sleep together for the relationship to be strong and vibrant and successful. For us, it’s almost the opposite.

Neustadt: It’s just a preference we both had coming into the relationship. We really value sleep. If you can sleep well, then you’re happier the next day, and I think that can help strengthen the relationship. I think that’s why I’ve enjoyed talking about it. I’ve had people write me messages, saying, “Thank you so much for opening up about this. It makes me feel like I can approach that topic with my partner.” I don’t have to feel guilty about it.

Lydia Geisel is a Digital Editorial Assistant at Domino.