Millennial Burnout Is Being Televised

How ‘Fyre Fraud’ and ‘Tidying Up With Marie Kondo’ capture a precarious cultural moment. 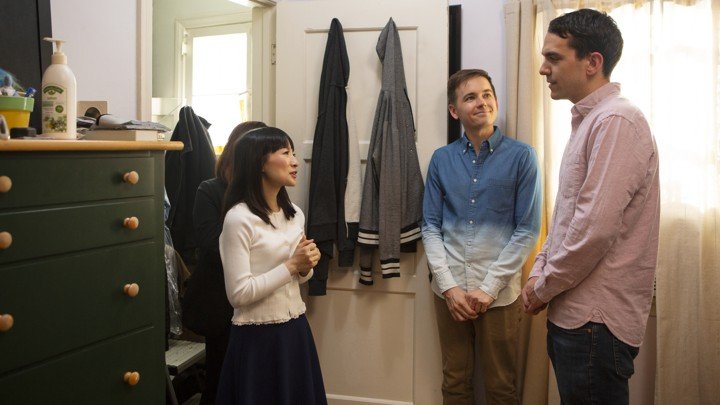 Marie Kondo in an episode of Tidying Up With Marie Kondo on Netflix. Photo from Netflix.

The fifth episode of Tidying Up With Marie Kondo, Netflix’s effervescent new reality series, deals with Frank and Matt, a couple living in West Hollywood, California. Both writers, they have a touching love story involving Tinder, a too-small apartment filled with detritus from past roommates, and a burning desire to prove their adulting bona fides. They are, in short, the archetypal Millennial couple. The dramatic hook of the episode is that Frank’s parents are coming to visit for the first time, and Frank wants to impress them, to make them see “that the life we’ve created together is something to be admired.”

Frank and Matt, in other words, want their home to reflect their identities and sense of self (as opposed to the cutlery preferences of the people Matt lived with after college). They’ve internalized the idea that the signifiers of success are primarily visual. “I don’t know that I’ve given [my parents] any reason to respect me as an adult,” Frank agonizes at one point, which is absurd, given his apparently successful career and adorable relationship. “I’m organized in some aspects of my life. Like, professionally, my email inbox is organized, I’m great. And I just get frustrated with myself that I haven’t translated that into my home life. It feels like I give it all at work and then I come home and am like, pmph.” He makes a gesture like a deflated balloon.

If the viral success of Tidying Up With Marie Kondo is anything to go by, Frank and Matt—their exhaustion, and their understanding that an adult existence is an optimized one—aren’t anomalous in their anxieties. Kondo, a Japanese organizational consultant, has sold more than 11 million books in 40 countries since the publication of her magnum opus, The Life-Changing Magic of Tidying Up. Compared to the interest in her television series, though, Kondo’s previous achievements are a relative blip. Netflix didn’t respond to queries about how many people had viewed Tidying Up, but in the U.S. at least, the show’s release has sparked a feverish curiosity about Kondo and her practices. 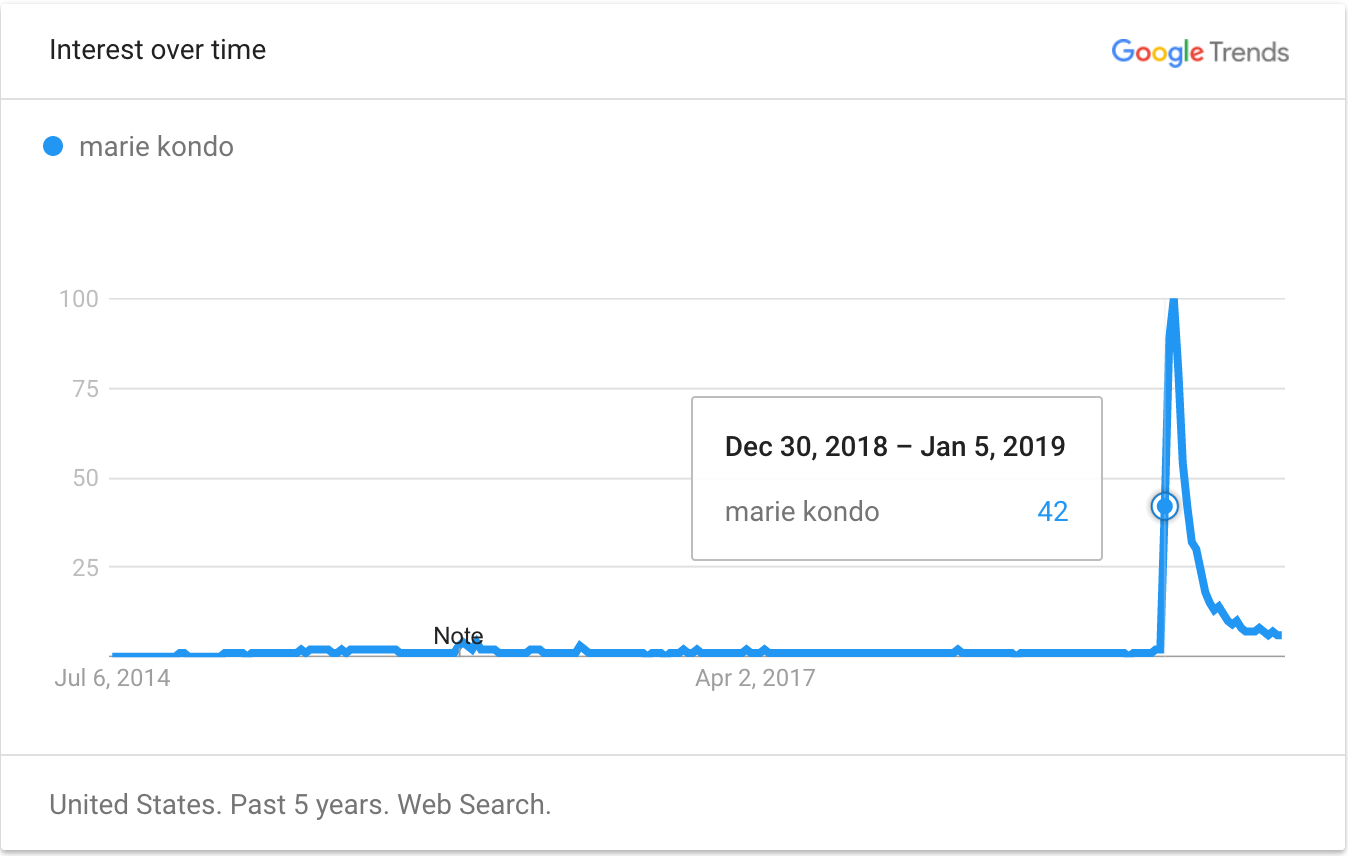 More than 192,000 Instagram pictures of color-coded sock drawers and neatly labeled mesh containers now bear the #KonMari hashtag. Thrift stores around the U.S. have reported record donation hauls as inspired Americans streamline their possessions. In barely three weeks, Kondo has gone from a best-selling author to a cultural juggernaut. In part, this is due to Netflix’s prodigious reach, particularly among young Millennials, who are five times more likely to watch a show on the streaming service than access it via any other provider. But the success of Tidying Up also speaks to how neatly some episodes of the show sync with its cultural moment, a time in which identity and achievements are visual metrics to be publicly displayed and curated, and a happy home is a perfected, optimized one.

For Millennials like me, people born roughly between 1981 and 1996, the desire to flaunt our tidying prowess isn’t just about showing off. A 2017 study by the British researchers Thomas Curran and Andrew P. Hill found that Millennials display higher rates of perfectionism than previous generations, in part because we’ve been raised with the idea that our future success hinges on being exceptional. But, as Frank suggests, we’re also struggling with what it means to really grow up. The aspirational markers of adulthood used to be relatively straightforward: graduation, marriage, children, homeownership, a 401(k). But now that Millennials are so overloaded with student debt that we struggle to buy places to live, adulthood is more complicated. It’s more performative. It’s #KonMari.

Four days after Netflix released Tidying Up, BuzzFeed News’s Anne Helen Petersen published what feels like a seminal analysis of a connected phenomenon. “How Millennials Became the Burnout Generation” elegantly and systematically documents how the malaise Frank complains about—putting so much effort into his work that he has nothing left for himself—is symptomatic of a much larger generational disorder. Millennials, Petersen argues, have been raised with the belief that they have to be exceptional, or they won’t succeed in an economy that since the early 2000s has seemed to dance perpetually on the edge of an abyss. “I never thought the system was equitable,” she writes. “I knew it was winnable for only a small few. I just believed I could continue to optimize myself to become one of them.”

This conviction is why Tidying Up With Marie Kondo has drawn so many fans in such a short time, and why your feeds might suddenly be bloated with soaring piles of clothes and arguments about whether to Kondo your books. Millennials have come to believe, Petersen writes, that “personal spaces should be optimized just as much as one’s self and career.” But the conspicuous nature of #KonMari also suggests a larger vacuum. Millennials don’t just gravitate to Marie Kondo because they don’t have apartments big enough to own things. What Tidying Up offers is both a counterpoint to the way they’ve been raised (less is more, versus more is always better) and an endorsement: The promise, at least as Millennial culture seems to have interpreted it, is that if people work to organize their lives to look just right, the rest will follow. The performance of the self has become more important than the reality. Even TV has noticed.

If Marie Kondo is the high priestess of burned-out Millennials, Fyre Festival was their summer solstice. In 2017, a large adult grifter named Billy McFarland partnered with the rapper Ja Rule to sell tickets to a festival in the Bahamas that promised to be the apotheosis of an Instagram-worthy event: megastars (Kendall Jenner, Bella Hadid); spectacular food; luxe but eco-friendly accommodations; music by Major Lazer, Migos, and Blink-182. McFarland partnered with a marketing company called Jerry Media that paid supermodels to promote the event on their social-media accounts, cultivating the sense that Fyre Festival would be the exclusive gathering for stars that any schmo could also buy a ticket to.

The seeds of Fyre Festival’s success were also its downfall: When attendees finally arrived at what turned out to be the gravelly parking lot near a Sandals resort, they documented everything they found on social media. Like the fact that the only places for people to sleep were unassigned FEMA tents with pallet mattresses. And that instead of luxurious communal bathrooms with showers, there were porta-potties. The most iconic post from Fyre Festival, in the end, was a picture of a sandwich: plain bread with two slices of slimy American cheese, accompanied by the hashtags #fyrefraud and #dumpsterfyre.

A car crash in slow motion, Fyre Festival was a catastrophe on such a colossal scale that two documentaries, released within days of each other, are trying to make sense of it. Netflix’s Fyre, as my colleague David Sims has written, takes a relatively straightforward approach to excavating the whole fiasco, accounting for not only McFarland’s crimes and the public spectacle of the festival’s monumental collapse, but also the Bahamian workers who still haven’t been paid for their efforts.

Fyre Fraud, surprise-dropped by Hulu last Monday, takes a different approach. Directed by Jenner Furst and Julia Willoughby Nason, it mines the sociological implications of Fyre Fest, and what it says about a generation of Americans that they’re so susceptible to a scammer with an Instagram account. Fyre Fraud includes parts of a taped interview with McFarland himself (who was supposedly paid for his participation), but they’re the least revealing moments in the documentary. More interesting is how Fyre Fraud uses the selling of the festival to consider the ways some Millennials understand identity, including their anxieties about affirming their existences online—literally, Pics or it didn’t happen.

Fyre Fraud posits that, for all the sloppiness of his grift, McFarland actually has a surprisingly intuitive sense of what Millennials want, and how to market it to them. Having been raised with the sense that being exceptional is the only way to thrive, Millennials can be hyperaware of their own status relative to others, and ferociously invested in elevating themselves above the pack. As preposterous as the Fyre Festival promotional video might seem now, it pings all the right dopamine receptors in an ongoing loop of stick (the acute FOMO of knowing everyone important is somewhere doing something fabulous without you) and carrot (countless Instagram opportunities for personal branding and self-curation). Influencers, the New Yorker writer Jia Tolentino says in Fyre Fraud, are people who have refined and monetized the art of this “performance of an attractive life.”

Which brings us back to the perfectionism study. Millennials, born during the Reagan, Bush Sr., and Clinton presidencies, are the first real babies spawned by neoliberalism and its overarching message of competitive individualism. Curran and Hill wanted to establish whether growing up amid these ideologies made Millennials more likely to be perfectionists, and therefore more likely to be depressed, anxious, unhappy, and dissatisfied with themselves. They concluded not only that perfectionism rates have risen, but also that Millennials’ identities have been fractured by shifting cultural values.

Even as they’re poorer, Millennials are more materialistic: 81 percent of Americans born during the 1980s say that accruing wealth is among their significant life goals, more than 20 percent higher than previous generations. As a national belief in the collective has given way to an emphasis on the individual, Millennials have had to become less inhibited about the pursuit of self-gain, and more shrewd about how they define themselves. Amplified by social media, such perfectionism urges the posting of absurdly idealized images, which, transmitted, reinforce the cycle of unrealistic physical ideals and a sense of alienation. “Neoliberalism,” Curran and Hill conclude, “has succeeded in shifting cultural values … to now emphasize competitiveness, individualism, and irrational ideals of the perfectible self.”

The messages that Millennials in the Western world were raised with, in other words, have taught them to work harder and better than ever before, in all aspects of their lives. And that work is making a generation miserable, as Petersen documents, as they strive to attain success and avoid failure, and are permanently attuned to the perceived expectations of others. They’ve constructed flimsy charades of identities based on what they think other people will want. They want to prove that their lives, as Frank says in Tidying Up, are things to be admired, and that their homes, vacations, children, closets all function as projections of their best selves: organized, attractive, authentic. Unattainable.

Sophie Gilbert is a staff writer at The Atlantic, where she covers culture.