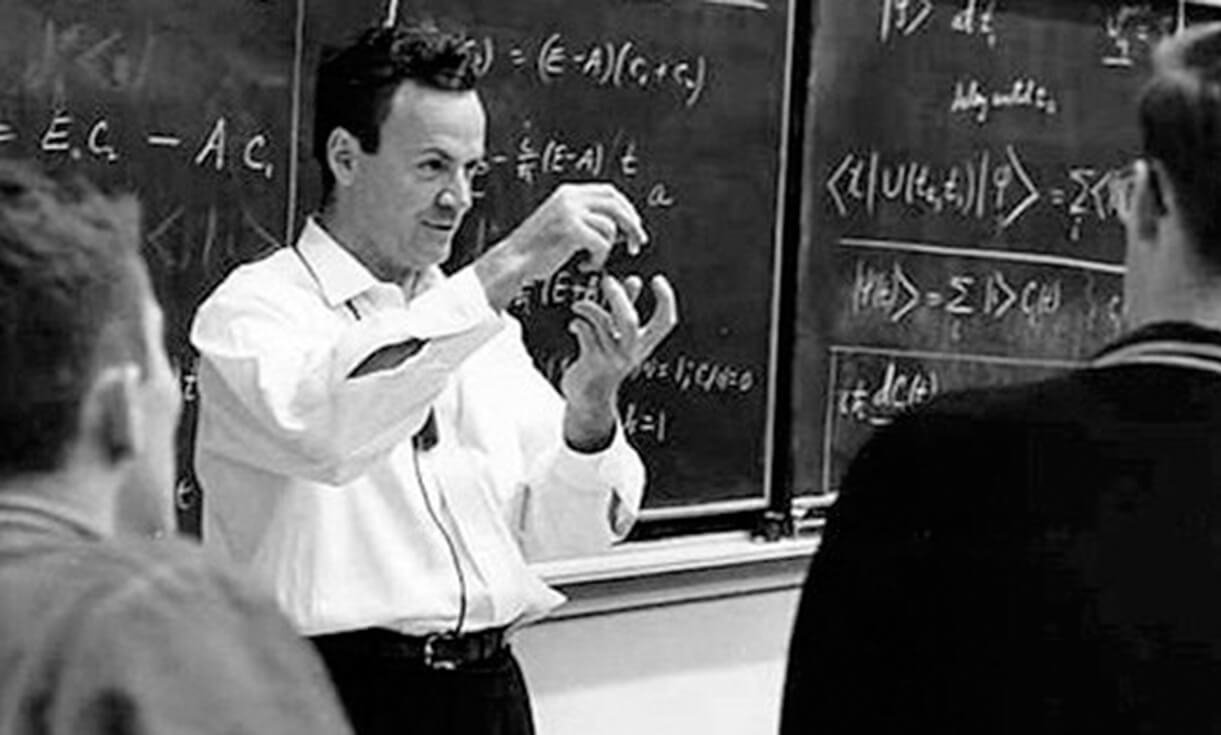 You can train your brain to think better. One of the best ways to do this is to expand the set of mental models you use to think. Let me explain what I mean by sharing a story about a world-class thinker.

I first discovered what a mental model was and how useful the right one could be while I was reading a story about Richard Feynman, the famous physicist. Feynman received his undergraduate degree from MIT and his Ph.D. from Princeton. During that time, he developed a reputation for waltzing into the math department and solving problems that the brilliant Ph.D. students couldn’t solve.

When people asked how he did it, Feynman claimed that his secret weapon was not his intelligence, but rather a strategy he learned in high school. According to Feynman, his high school physics teacher asked him to stay after class one day and gave him a challenge.

“Feynman,” the teacher said, “you talk too much and you make too much noise. I know why. You’re bored. So I’m going to give you a book. You go up there in the back, in the corner, and study this book, and when you know everything that’s in this book, you can talk again.” 1

So each day, Feynman would hide in the back of the classroom and study the book—Advanced Calculus by Woods—while the rest of the class continued with their regular lessons. And it was while studying this old calculus textbook that Feynman began to develop his own set of mental models.

“That book showed how to differentiate parameters under the integral sign,” Feynman wrote. “It turns out that’s not taught very much in the universities; they don’t emphasize it. But I caught on how to use that method, and I used that one damn tool again and again. So because I was self-taught using that book, I had peculiar methods of doing integrals.”

“The result was, when the guys at MIT or Princeton had trouble doing a certain integral, it was because they couldn’t do it with the standard methods they had learned in school. If it was a contour integration, they would have found it; if it was a simple series expansion, they would have found it. Then I come along and try differentiating under the integral sign, and often it worked. So I got a great reputation for doing integrals, only because my box of tools was different from everybody else’s, and they had tried all their tools on it before giving the problem to me.” 2

Every Ph.D. student at Princeton and MIT is brilliant. What separated Feynman from his peers wasn't necessarily raw intelligence. It was the way he saw the problem. He had a broader set of mental models.

What is a Mental Model?

A mental model is an explanation of how something works. It is a concept, framework, or worldview that you carry around in your mind to help you interpret the world and understand the relationship between things. Mental models are deeply held beliefs about how the world works.

Mental models guide your perception and behavior. They are the thinking tools that you use to understand life, make decisions, and solve problems. Learning a new mental model gives you a new way to see the world—like Richard Feynman learning a new math technique.

Mental models are imperfect, but useful. There is no single mental model from physics or engineering, for example, that provides a flawless explanation of the entire universe, but the best mental models from those disciplines have allowed us to build bridges and roads, develop new technologies, and even travel to outer space. As historian Yuval Noah Harari puts it, “Scientists generally agree that no theory is 100 percent correct. Thus, the real test of knowledge is not truth, but utility.”

The best mental models are the ideas with the most utility. They are broadly useful in daily life. Understanding these concepts will help you make wiser choices and take better actions. This is why developing a broad base of mental models is critical for anyone interested in thinking clearly, rationally, and effectively.

The Secret to Great Thinking and Decision Making

Expanding your set of mental models is something experts need to work on just as much as novices. We all have our favorite mental models, the ones we naturally default to as an explanation for how or why something happened. As you grow older and develop expertise in a certain area, you tend to favor the mental models that are most familiar to you.

Here's the problem: when a certain worldview dominates your thinking, you’ll try to explain every problem you face through that worldview. This pitfall is particularly easy to slip into when you're smart or talented in a given area.

The more you master a single mental model, the more likely it becomes that this mental model will be your downfall because you’ll start applying it indiscriminately to every problem. What looks like expertise is often a limitation. As the common proverb says, “If all you have is a hammer, everything looks like a nail.” 3

When a certain worldview dominates your thinking, you’ll try to explain every problem you face through that worldview.

Consider this example from biologist Robert Sapolsky. He asks, “Why did the chicken cross the road?” Then, he provides answers from different experts.

Technically speaking, none of these experts are wrong. But nobody is seeing the entire picture either. Each individual mental model is just one view of reality. The challenges and situations we face in life cannot be entirely explained by one field or industry.

All perspectives hold some truth. None of them contain the complete truth.

Relying on a narrow set of thinking tools is like wearing a mental straitjacket. Your cognitive range of motion is limited. When your set of mental models is limited, so is your potential for finding a solution. In order to unleash your full potential, you have to collect a range of mental models. You have to build out your decision making toolbox. Thus, the secret to great thinking is to learn and employ a variety of mental models.

Expanding Your Set of Mental Models

The process of accumulating mental models is somewhat like improving your vision. Each eye can see something on its own. But if you cover one of them, you lose part of the scene. It’s impossible to see the full picture when you’re only looking through one eye.

Similarly, mental models provide an internal picture of how the world works. We should continuously upgrade and improve the quality of this picture. This means reading widely from the best books, studying the fundamentals of seemingly unrelated fields, and learning from people with wildly different life experiences. 4

The mind's eye needs a variety of mental models to piece together a complete picture of how the world works. The more sources you have to draw upon, the clearer your thinking becomes. As the philosopher Alain de Botton notes, “The chief enemy of good decisions is a lack of sufficient perspectives on a problem.”

The Pursuit of Liquid Knowledge

In school, we tend to separate knowledge into different silos—biology, economics, history, physics, philosophy. In the real world, information is rarely divided into neatly defined categories. In the words of Charlie Munger, “All the wisdom of the world is not to be found in one little academic department.” 5

World-class thinkers are often silo-free thinkers. They avoid looking at life through the lens of one subject. Instead, they develop “liquid knowledge” that flows easily from one topic to the next.

This is why it is important to not only learn new mental models, but to consider how they connect with one another. Creativity and innovation often arise at the intersection of ideas. By spotting the links between various mental models, you can identify solutions that most people overlook.

You don't need to master every detail of every subject to become a world-class thinker. Of all the mental models humankind has generated throughout history, there are just a few dozen that you need to learn to have a firm grasp of how the world works.

Many of the most important mental models are the big ideas from disciplines like biology, chemistry, physics, economics, mathematics, psychology, philosophy. Each field has a few mental models that form the backbone of the topic. For example, some of the pillar mental models from economics include ideas like Incentives, Scarcity, and Economies of Scale.

If you can master the fundamentals of each discipline, then you can develop a remarkably accurate and useful picture of life. To quote Charlie Munger again, “80 or 90 important models will carry about 90 percent of the freight in making you a worldly-wise person. And, of those, only a mere handful really carry very heavy freight.” 6

I've made it a personal mission to uncover the big models that carry the heavy freight in life. After researching more than 1,000 different mental models, I gradually narrowed it down to a few dozen that matter most. I've written about some of them previously, like entropy and inversion, and I'll be covering more of them in the future. If you're interested, you can browse my slowly expanding list of mental models.

My hope is to create a list of the most important mental models from a wide range of disciplines and explain them in a way that is not only easy to understand, but also meaningful and practical to the daily life of the average person. With any luck, we can all learn how to think just a little bit better.