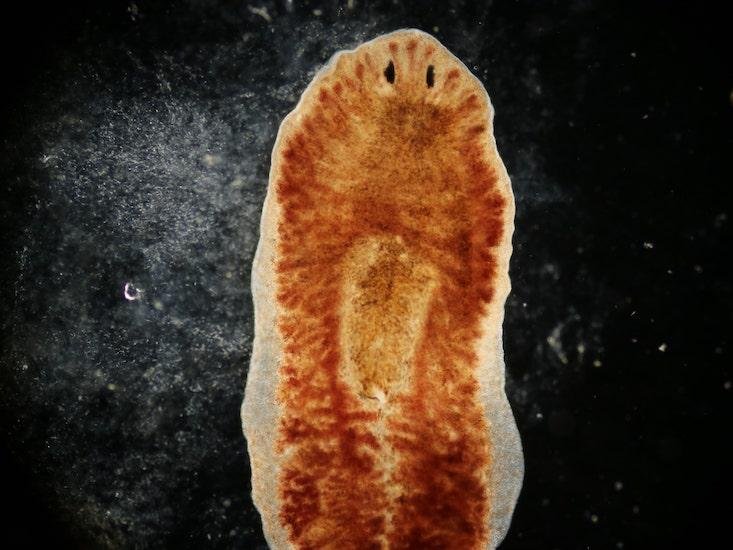 The study of memory has always been one of the stranger outposts of science. In the 1950s, an unknown psychology professor at the University of Michigan named James McConnell made headlines—and eventually became something of a celebrity—with a series of experiments on freshwater flatworms called planaria. These worms fascinated McConnell not only because they had, as he wrote, a “true synaptic type of nervous system” but also because they had “enormous powers of regeneration…under the best conditions one may cut [the worm] into as many as 50 pieces” with each section regenerating “into an intact, fully-functioning organism.”

In an early experiment, McConnell trained the worms à la Pavlov by pairing an electric shock with flashing lights. Eventually, the worms recoiled to the light alone. Then something interesting happened when he cut the worms in half. The head of one half of the worm grew a tail and, understandably, retained the memory of its training. Surprisingly, however, the tail, which grew a head and a brain, also retained the memory of its training. If a headless worm can regrow a memory, then where is the memory stored, McConnell wondered. And, if a memory can regenerate, could he transfer it?

McConnell’s work has recently experienced a sort of renaissance.

Perhaps. Swedish neurobiologist Holger Hydén had suggested, in the 1960s, that memories were stored in neuron cells, specifically in RNA, the messenger molecule that takes instructions from DNA and links up with ribosomes to make proteins, the building blocks of life. McConnell, having become interested in Hydén’s work, scrambled to test for a speculative molecule that he called “memory RNA” by grafting portions of trained planaria onto the bodies of untrained planaria. His aim was to transfer RNA from one worm to another but, encountering difficulty getting the grafts to stick, he turned to a “more spectacular type of tissue transfer, that of ‘cannibalistic ingestion.’” Planaria, accommodatingly, are cannibals, so McConnell merely had to blend trained worms and feed them to their untrained peers. (Planaria lack the acids and enzymes that would completely break down food, so he hoped that some RNA might be integrated into the consuming worms.)

Shockingly, McConnell reported that cannibalizing trained worms induced learning in untrained planaria. In other experiments, he trained planaria to run through mazes and even developed a technique for extracting RNA from trained worms in order to inject it into untrained worms in an effort to transmit memories from one animal to another. Eventually, after his retirement in 1988, McConnell faded from view, and his work was relegated to the sidebars of textbooks as a curious but cautionary tale. Many scientists simply assumed that invertebrates like planaria couldn’t be trained, making the dismissal of McConnell’s work easy. McConnell also published some of his studies in his own journal, The Worm Runner’s Digest, alongside sci-fi humor and cartoons. As a result, there wasn’t a lot of interest in attempting to replicate his findings.

Nonetheless, McConnell’s work has recently experienced a sort of renaissance, taken up by innovative scientists like Michael Levin, a biologist at Tufts University specializing in limb regeneration, who has reproduced modernized and automated versions of his planarian maze-training experiments. The planarian itself has enjoyed a newfound popularity, too, after Levin cut the tail off a worm and shot a bioelectric current through the incision, provoking the worm to regrow another head in place of its tail (garnering Levin the endearing moniker of “young Frankenstein”). Levin also sent 15 worm pieces into space, with one returning, strangely enough, with two heads (“remarkably,” Levin and his colleagues wrote, “amputating this double-headed worm again, in plain water, resulted again in the double-headed phenotype.”)

David Glanzman, a neurobiologist at the University of California, Los Angeles, has another promising research program that recently struck a chord reminiscent of McConnell’s memory experiments—although, instead of planaria, Glanzman’s lab works mostly with aplysia, the darling mollusk of neuroscience on account of its relatively simple nervous system. (Also known as “sea hares,” aplysia are giant, inky sea slugs that swim with undulating, ruffled wings.)

In 2015, Glanzman was testing the textbook theory on memory, which holds that memories are stored in synapses, the connective junctions between neurons. His team, attempting to create and erase a memory in aplysia, periodically delivered mild electric shocks to train the mollusk to prolong a reflex, one where it withdraws, upon touch, its siphon, a little breathing tube between the gill and the tail. After training, his lab witnessed new synaptic growth between the sensory neuron that felt touch and the motor neuron that triggered the siphon withdrawal reflex. Developing after the training, the increased connectivity between those neurons seemed to corroborate the theory that memories are stored in synaptic connections. Glanzman’s team tried to erase the memory of the training by dismantling the synaptic connections between the neurons and, sure enough, the snails subsequently behaved as if they’d lost the memory, further corroborating the synaptic memory theory. After Glanzman’s team administered a “reminder” shock to the snails, the researchers were surprised to quickly notice different, newer synaptic connections growing between the neurons. The snails then behaved, once again, as if they remembered the sensitizing training they seemed to have previously forgotten.

If the memory persisted through such major synaptic change, where the synaptic connections that emerged through training had disappeared and completely different, newer connections had taken their place, then maybe, Glanzman thought, memories are not really stored in synapses after all. The experiment seems like something out of Eternal Sunshine of the Spotless Mind, a movie in which ex-lovers trying to forget each other undergo a questionable procedure that deletes the memory of a person, but evidently not to the point beyond recall. The lovers both hide a plan deep within their minds to meet in Montauk in the end. The movie suggests, in a way, that memories are never completely lost, that it always remains possible to go back, even to people and places that seem long forgotten. 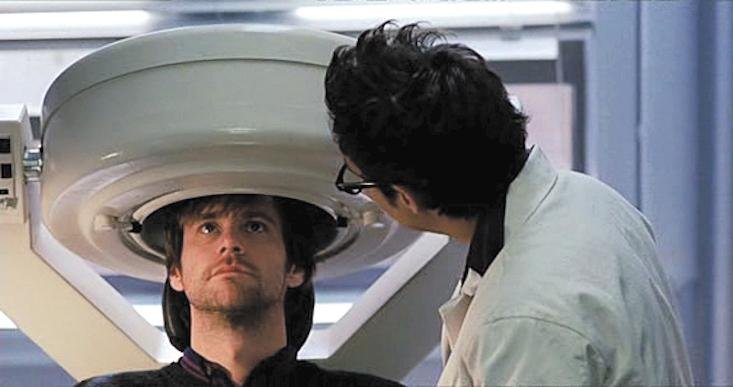 In the end, despite its whimsical caricature of the science of memory, Eternal Sunshine may have stumbled on a correct premise. Photo from Focus Features / Universal / Rosenfeld Media / Flickr.

But if memories aren’t stored in synaptic connections, where are they stored instead? Glanzman’s unpopular hypothesis was that they might reside in the nucleus of the neuron cell, where DNA and RNA sequences compose instructions for life processes. DNA sequences are fixed and unchanging, so most of an organism’s adaptability comes from supple epigenetic mechanisms, processes that regulate gene expression in response to environmental cues or pressures, which sometimes involve RNA. If DNA is printed sheet music, RNA-induced epigenetic mechanisms are like improvisational cuts and arrangements that might conduct learning and memory.

Perhaps memories reside in epigenetic changes induced by RNA, that improv molecule that scores protein-based adaptations of life. Glanzman’s team went back to their aplysia and trained them over two days to prolong their siphon-withdrawal reflex. They then dissected their nervous systems, extracting RNA involved in forming the memory of their training, and injected it into untrained aplysia, which were tested for learning a day later. Glanzman’s team found that the RNA from trained donors induced learning, while the RNA from untrained donors had no effect. They had transferred a memory, vaguely but surely, from one animal to another, and they had strong evidence that RNA was the memory-transferring agent.

Glanzman now believes that synapses are necessary for the activation of a memory, but that the memory is encoded in the nucleus of the neuron through epigenetic changes. “It’s like a pianist without hands,” Glanzman says. “He may know how to play Chopin, but he’d need hands to exercise the memory.”

The work of Douglas Blackiston, an Allen Discovery Center scientist at Tufts University, who has studied memory in insects, paints a similar picture. He wanted to know if a butterfly could remember something about its life as a caterpillar, so he exposed caterpillars to the scent of ethyl acetate followed by a mild electric shock. After acquiring an aversion to ethyl acetate, the caterpillars pupated and, after emerging as adult butterflies several weeks later, were tested for memory of their aversive training. Surprisingly, the adult butterflies remembered—but how? The entire caterpillar becomes a cytoplasmic soup before it metamorphosizes into a butterfly. “The remodeling is catastrophic,” Blackiston says. “After all, we’re moving from a crawling machine to a flying machine. Not only the body but the entire brain has to be rewired.”

It’s hard to study exactly what goes on during pupation in vivo, but there’s a subset of caterpillar neurons that may persist in what are called “mushroom bodies,” a pair of structures involved in olfaction that many insects have located near their antennae. In other words, some structure remains. “It’s not soup,” Blackiston says. “Well, maybe it’s soup, but it’s chunky.” There’s near complete pruning of neurons during pupation, and the few neurons that remain become disconnected from other neurons, dissolving the synaptic connections between them in the process, until they reconnect with other neurons during the remodeling into the butterfly brain. Like Glanzman, Blackiston employs a hand analogy: “It’s like a small group of neurons were holding hands, but then let go and moved around, finally reconnecting with different neurons in the new brain.” If the memory was stored anywhere, Blackiston suspects it was stored in the subset of neurons located in the mushroom bodies, the only known carryover material from the caterpillar to the butterfly.

In the end, despite its whimsical caricature of the science of memory, Eternal Sunshine may have stumbled on a correct premise. Not only do Glanzman and Blackiston believe their experiments harbor hopeful news for Alzheimer’s patients, it also might be possible to repair deteriorated neurons that could, at least theoretically, find their way back to lost memories, perhaps with the guidance of appropriate RNA.

Marco Altamirano is a writer based in New Orleans and the author of Time, Technology, and Environment: An Essay on the Philosophy of Nature. Follow him on Twitter @marcosien.