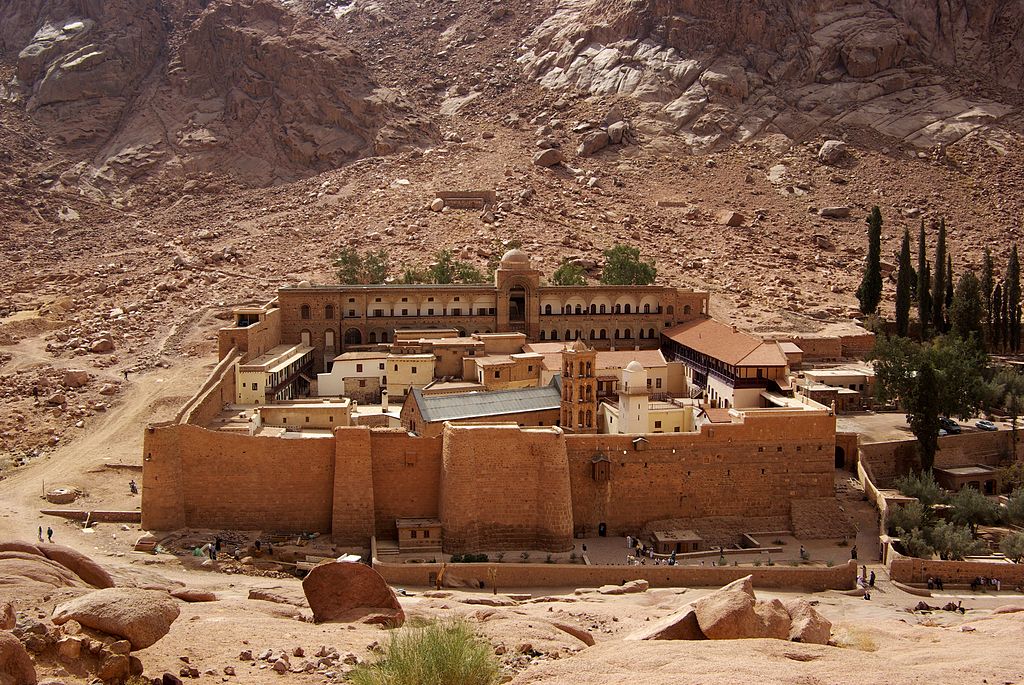 Saint Catherine’s Monastery, a sacred Christian site nestled in the shadow of Mount Sinai, is home to one of the world’s oldest continuously used libraries. Thousands of manuscripts and books are kept there—some of which contain hidden treasures.

Now, as Jeff Farrell reports for the Independent, a team of researchers is using new technology to uncover texts that were erased and written over by the monks who lived and worked at the monastery. Many of these original texts were written in languages well known to researchers—Latin, Greek, Arabic—but others were inscribed in long-lost languages that are rarely seen in the historical record.

Manuscripts with multiple layers of writing are known as palimpsests, and there are about 130 of them at St. Catherine’s Monastery, according to the website of the Early Manuscript Electronic Library, which has been leading the initiative to uncover the original texts. As Richard Gray explains in the Atlantic, with the rise of Islam in the 7th century, Christian sites in the Sinai Desert began to disappear, and Saint Catherine’s found itself in relative isolation. Monks turned to reusing older parchments when supplies at the monastery ran scarce.

To uncover the palimpsests’ secret texts, researchers photographed thousands of pages multiple times, illuminating each page with different-colored lights. They also photographed the pages with light shining onto them from behind, or from an oblique angle, which helped “highlight tiny bumps and depressions in the surface,” Gray writes. They then fed the information into a computer algorithm, which is able to distinguish the more recent texts from the originals.

Since 2011, researchers have photographed 74 palimpsests, which boast 6,800 pages between them. And the team’s results have been quite astonishing. Among the newly revealed texts, which date from the 4th to the 12th century, are 108 pages of previously unknown Greek poems and the oldest-known recipe attributed to the Greek physician Hippocrates.

But perhaps the most intriguing finds are the manuscripts written in obscure languages that fell out of use many centuries ago. Two of the erased texts, for instance, were inked in Caucasian Albanian, a language spoken by Christians in what is now Azerbaijan. According to Sarah Laskow of Atlas Obscura, Caucasian Albanian only exists today in a few stone inscriptions. Michael Phelps, director of the Early Manuscripts Electronic Library, tells Gray of the Atlantic that the discovery of Caucasian Albanian writings at Saint Catherine’s library has helped scholars increase their knowledge of the language’s vocabulary, giving them words for things like “net” and “fish.”

Other hidden texts were written in a defunct dialect known as Christian Palestinian Aramaic, a mix of Syriac and Greek, which was discontinued in the 13th century only to be rediscovered by scholars in the 18th century. “This was an entire community of people who had a literature, art, and spirituality,” Phelps tells Gray. “Almost all of that has been lost, yet their cultural DNA exists in our culture today. These palimpsest texts are giving them a voice again and letting us learn about how they contributed to who we are today.”

The Sinai Palimpsests Project, as the team’s initiative is known, has taken on new urgency in recent years, as the Islamic State’s presence in the Sinai Peninsula has made Saint Catherine’s monastery even harder to reach. Phelps and his fellow researchers are making images of the palimpsests available online, so scholars can explore the secret writings that have recently been brought to light.

Brigit Katz is a freelance writer based in Toronto. Her work has appeared in a number of publications, including NYmag.com, Flavorwire and Tina Brown Media's Women in the World.