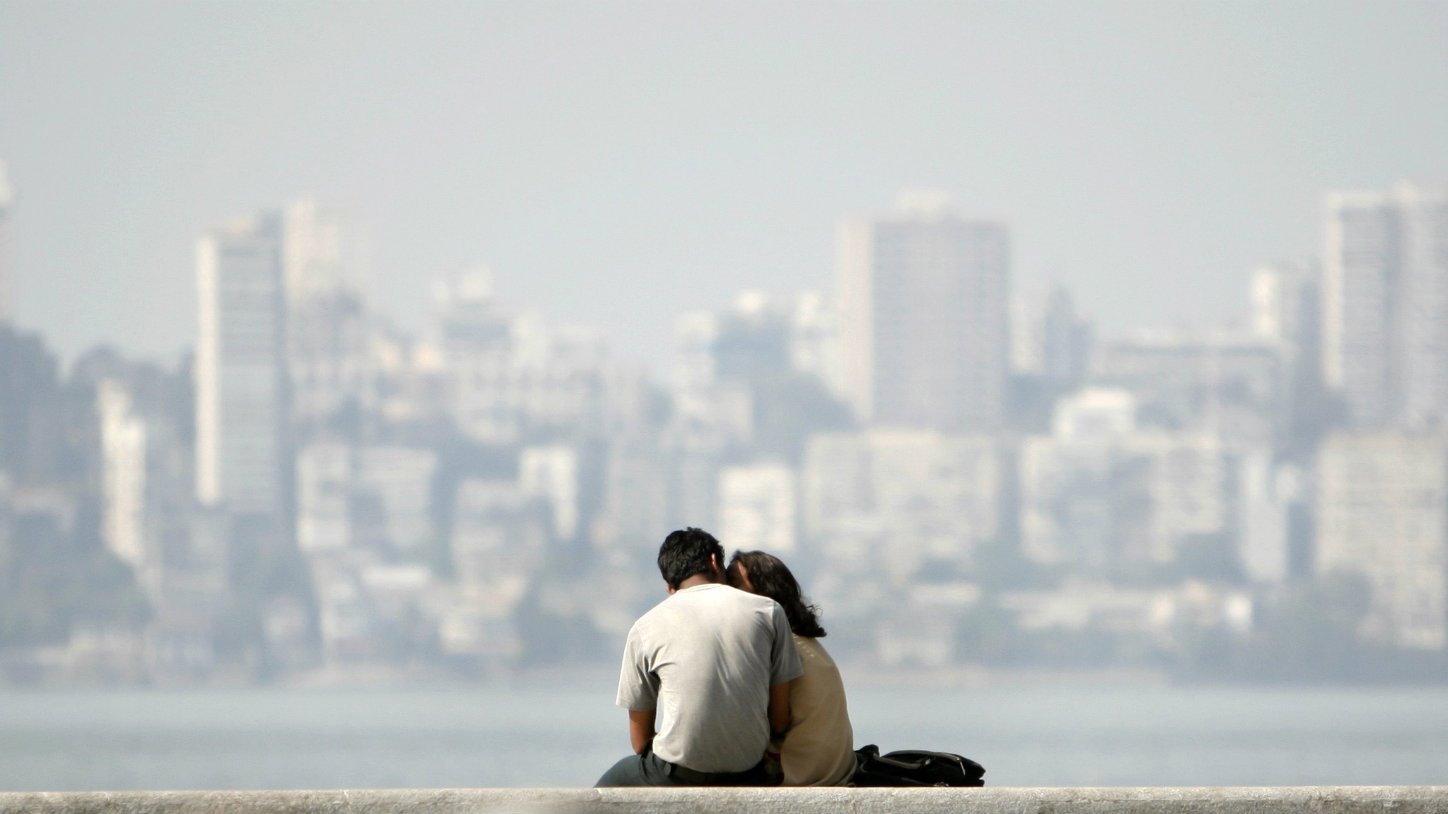 In 2008, at the age of 22, American writer Elizabeth Flock moved to Mumbai with a vague idea of working in Bollywood.

She ended up at the business magazine Forbes instead. But in the process of living and working in India’s financial capital, Flock met and befriended a number of Indian couples whose approach to love was a lot like what many Hindi films promised: a form of devotion, if not outright obsession. It was a “showy, imaginative kind of love,” she thought, but one that seemed more honest and real, compared to the failing marriages and rampant divorce she knew of in the West.

Flock went back to the US after two years, but she remained fascinated by Indian relationships. So, she decided to try and write a portrait of modern-day India through the lens of its marriages. Over the next decade, though, the country’s dramatic economic and social changes would transform life in the metropolis, and especially change the marriages she first encountered.

“When I landed in Mumbai in 2014, the city, save for its skyline—which had more malls and high-rises—looked much the same. The people I knew did not. Their marriages did not,” Flock writes in her book, Love and Marriage in Mumbai (Bloomsbury India). “They were calling old lovers. They were contemplating affairs and divorce. And the desperate attempts they were making to save their marriages, by having children, in at least one instance, were efforts I recognised from my own family.”

The book is deeply researched and gives a startlingly intimate account of three middle-class couples struggling to balance tradition and their desires in a changing urban India. Its approach is especially unconventional in a country where representations of love and marriage don’t often explore what happily ever after really entails, and many of the issues Indian couples face, such as divorce and the search for sexual satisfaction, are still taboo topics.

In the book, we meet the romantic Maya and workaholic Veer, a Marwari Hindu couple who seem to want entirely different things. Then there’s Shahzad and Sabeena, a Sunni Muslim couple engaged in a long struggle against impotence and the cultural pressure to have children, and Ashok and Parvati, Tamil Brahmin Hindus who have a relatively late arranged marriage after years of trying to find love on their own. Parvati’s previous relationship with a Christian friend, whom she couldn’t have married, weighs over her new relationship, and depression and the pain of a miscarriage add to the burden. (Flock changed the names of all the people in the book.)

In a 2018 conversation with Quartz, Flock explained why the growing agency of Indian women is changing urban marriages and how couples in both India and the US shy away from talking openly about the difficulties they face.

Why did you decide to tell the story of these three couples specifically?

Elizabeth Flock: There were other couples that I interviewed and talked to. One of them was two yogis who jumped over the walls of an ashram to be together. Then there was a woman who was a jewellery seller on the train who fell in love with a Nigerian millionaire and they ran away together. Those were both really dramatic stories, obviously, but in the end I felt like I wanted to tell the stories of middle-class, ordinary people, because I connected with those people, because they had the same experience as me in some ways. And I also just felt like so much social change and cultural change is happening that’s affecting the middle class, so what does that look like to the ordinary person?

How exactly are Indian marriages changing?

EF: It’s hard to generalise, and I hope people don’t think my book is representative of all of India, or even marriage in Mumbai. But from what I found, and anecdotally, a lot of the changes were with women, and the book became a lot more about women—the growing agency, independence, and life being different from their mothers’ generation.

If you think about Maya, part of the difficulty in her marriage with Veer is that she wanted a lot more than what her mother demanded of her husband. Maya’s mother was sort of okay with financial support; Maya was like, I also need companionship and all of these other things. Veer was like, I don’t understand. And that was a common theme. I saw really strong women who had strong ideas of what they wanted. The men were a bit more lost and a bit more behind. It was like they were living in two different worlds.

In general, there’s obviously change in terms of sex, there’s liberalisation, there are more people having affairs, more people watching pornography, more divorce. Obviously that’s putting a lot of pressure on marriages. Pornography could be a good thing (but) sometimes it can add stress. What’s really interesting is the startling intimacy in this book. We’ve a lot of social taboos in India, and affairs, divorce, sex, and pornography aren’t things we often openly talk about. How did you convince the couples to share these stories?

EF: The fact that their names were changed opened up a lot. If I had done otherwise, it would have been an entirely different process. Locations (were also) left out. We worked really hard on that aspect.

People participated for a lot of different reasons; some were excited to tell their story, others took a long time. I’m sure there are lots of things they didn’t tell me. For example, with Shazhad talking about sexuality and impotence and his religion, that was really intimate and difficult, but also once he started talking about it, he didn’t want to stop. Our interview would be scheduled for two hours, and then six hours later he’d be like, “And another thing!”

I’m not a trained therapist, but I tried as much as humanly possible to listen without judgement and write the stories that way as well.

Were you ever wary of approaching this story as an outsider, an American from a completely different culture?

EF: I’m definitely cognisant that it comes with a certain amount of privilege for me to be able to come and do this project. There’re so many bad books written by foreigners about India; I’ve read a lot of them and it’s mind-boggling to me. So I can’t imagine how it feels to Indians.

I tried really hard to work against those bad models. I think a good foreign correspondent, a good outsider writing can provide things that an inside group doesn’t see or doesn’t talk about. That’s the benefit of being an outsider. But it’s really easy to mess it up, and I’m sure I didn’t do everything well. That’s also why I didn’t put myself in it at the end. Because I had written it originally in the first-person. And I just felt like it was the omniscient narrator “I” telling you, this is how India’s changed. Instead, I wanted the couples and the people to tell you that.

In India, popular representations of love and marriage mostly tend to stop at the point where the couple gets together, especially in Bollywood. Your book begins where these representations end and it’s not always pretty. Why is this area relatively unexplored?

EF: Maybe we are all hopeless romantics! What happens after marriage is really difficult, and no one wants to read about people falling out of love. Many of us still believe in this institution and hope it works out. We often don’t talk about what is happening in marriage after marriage, not just in our representations but (even) among our friends. My friends in the US and in India, I’ll ask how’s it going with so-and-so, and they’ll be like, “Oh, it’s lovely, everything’s great.” Often, no one’s saying “We’re actually fighting every night, I’m really stressed about it.” That can make it really lonely when you do get married because you feel like you’re the only person that’s having these difficulties.

I’m curious to know what the couples think about how you handled their life stories. What kind of response did you get from them?

EF: It depended person to person. They read it before it came out in India and I gave them the opportunity to make small changes. Ashok was like, who’s going to play me in the movie! For some people reading it was like a good experience and also painful. I think that was true in the case of Parvati. Ashok and Parvati read the book together side-by-side and discussed each chapter, which I thought was very bold and amazing in a way!

As journalists we think we can parachute in and not have any impact on the people we write about. But by the very act of asking people questions about their marriage, you’re shaping their marriage.