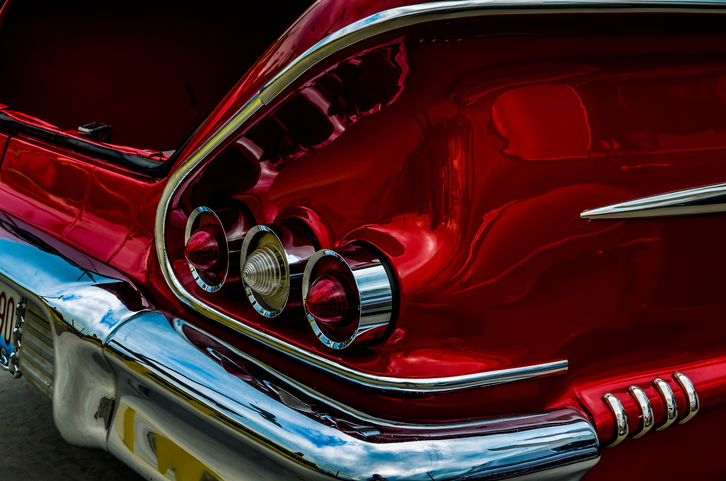 These are words that could only describe the famous lowriders belonging to L.A.’s Chicano community, which are the subject of photographer Kristin Bedford’s new book, Cruise Night. For the project, she spent five years immersing herself in Mexican American lowriding clubs in East Los Angeles, attending all of the events she was invited to—weddings, funerals and quinceañeras—where the members would display their cars. The result is a series of photos that, like the cars themselves, tell a visual story of how lowriders—the term refers to both the cars and their owners—have used customization as a means of resisting a homogenizing American society that too often suppresses the creativity and pride of its minorities.

Bedford’s interest in the nexus between art and activism originated at an early age. Growing up in Washington, D.C., Bedford’s father, political filmmaker and activist Chris Bedford, raised her with an awareness of, and appreciation for, iconic Chicano activists like Cesar Chavez and Ruben Salazar, a journalist with the Los Angeles Times from 1959 to 1970 and the first Mexican American to write about Chicanos. Despite the fact that these figures were culturally and geographically far away, they were always in “the back of my head,” says Bedford. When she eventually moved to L.A., one of the first things she set out to find was the Silver Dollar Café, the site in East L.A. where Salazar was murdered in 1970.

The roots of lowriding in L.A. trace all the way back to the 1940s, when car culture was beginning to take hold across America. This was especially true in southern California where families began purchasing cars in order to adapt to the expanded cities of the new, post-war urban landscape.

Like their white counterparts, Mexican American veterans were also purchasing cars with the money they were earning from their service in World War II. As the “hot rod” trend swept the country, which comprised mainly of vintage models like Ford Model-Ts being modernized with enlarged engines for speed, Mexican American vets, deftly employing the mechanical training they had received in the army, began to tweak their cars in their own garages as a means of distinguishing themselves both on and off the road. Tinkering with the engines, painting the exteriors and even adding weights in the back to lower the bodies, Mexican Americans were purposefully altering their cars—Chevys, which were in surplus at the time and designed with an X on the bottom that made them easy to modify were especially popular—so that, unlike the “hot and fast” hot rods, their cars would be “low and slow.”

Steve Velasquez, a curator of cultural and community life at the Smithsonian’s National Museum of American History, explains that, “lowriding is a reflection of that Mexican American post-war experience.” (The museum has a 1969 Ford LTD that David Jaramillo of Chimayo, New Mexico, converted into a lowrider he called “Dave’s Dream” in the late ‘70s.) Unlike the hot rods that were taking the country by storm, the lowriders were “about something different.”

As Mexican Americans began to collectively reimagine their identity from an empowered perspective during the Chicano Movement in the 1970s, lowriders took on a more formalized political function. Car clubs, which were forming at this time, began offering community services, like fundraising for the United Farm Workers labor union and hosting health initiatives. “Yes [they] liked talking about cars and working on cars,” says Velasquez of the clubs. “But they also started to create these community events. The car aspect was 10 percent, and the social aspect was 90 percent.”

The Chicano Movement also involved the rediscovery of pro-pueblo imagery by artists such as Diego Rivera—imagery including flowers, warriors and geometric designs that borrowed heavily from stories and myths belonging to Mexico’s Indigenous groups and eventually made its way onto the cars. “You can see changes in artistic practices, how car clubs are being created and why they’re being created. You see the shift where it’s more community-focused, and you see the [same] shift in art,” Velasquez says.

As evidenced by Bedford’s portraits of young people and their cars, lowriders are still in fashion today—it’s even possible that, with the popularity of lowriders in Japan and Brazil, lowriders are, at least on a global level, more popular than ever. Locally, they even continue to serve a public function. According to Velasquez, club members in L.A. organized to deliver food and other supplies to workers stranded in central California during the Covid-19 pandemic. Although less people are buying their own cars, the traditions continue because the cars are being passed down intergenerationally among family members.

The strategic use of style as a modality of resistance is one of the key elements that attracted Bedford to producing her collection of photos. Calling the cars “mobile canvases,” she says it was immediately clear to her that customization is a way to have a voice. “Cruising down the boulevard, in your own car, realizing your own vision, is a way of saying: I’m here,” she says.

From intimate close-ups that show Aztec figures painted on the cars’ exteriors to wider shots that showcase the Mexican flag hanging over a trunk, Bedford’s photos depict the way lowriders fold Mexican cultural symbols into their own work as a means of asserting a sense of ownership over their heritage.

Other homages to traditional customs are visible in the portraits of the lowrider owners themselves. In one notably quiet photo, a teenage girl is captured in a reflective moment as she looks away from the camera; a flower tucked behind her ear serves as a reference to Pachuca style, a trend defined by broad-shoulders, high-waist trousers, combed hair and a silver chain dangling from a waistbelt that also emerged among Chicano boys in the 1940s as a symbol of rebellion. Bedford says this is also a reference to the Zoot Suit Riots of 1943, another example of a time in which Mexican Americans in Los Angeles deployed style and aesthetics—in this particular case, fashion—to protest the systemic inequality they were experiencing in white society. Bedford believes these details contribute to the “L.A. quality” of the photographs.

Bedford’s own artistic process was entirely self-directed, and she says the book was created in isolation. Foregoing working with an editor or art director, she was the one who picked out the photos, sequenced them and selected the wonderful quotes from different members of L.A.’s lowrider community that are included as part of the oral history.

“I let the photos guide the story,” she explains. “Once I start making photos, I don’t have an agenda. I make the work and then go back to my studio and see what the photos are telling me.”

Bedford believes this is the way for her to remain honest to her project and to avoid falling into the trap of replicating work that already exists. She adds, “I live in mystery for my entire project, and I let the photos tell me what it’s about.”

Bedford hopes that her work will contribute to rewriting the public’s misunderstandings about lowriders, who are often ignorantly associated with gang activity and violence. In 1958, the state of California passed section 24008 of its vehicle code, which went so far as to outlaw any car on a public road if any of the car was “lower than the bottom of the wheel rim.” Soon after, hydraulic systems that allowed drivers to raise and lower their vehicles came into play. This is the type of stigma and racism that Bedford seeks to challenge. “What I bring through my experience and my art form is how I experienced the beauty and nuance and sophistication of this community, and of the cars they’ve created,” she states.

Estevan Oriol, noted L.A. photographer and member of the Pegasus Car Club, says that Hollywood has contributed to the negative stigma attached to lowriders, and it’s important to him to let people ask him questions so that he can help “educate and enlighten them” about lowriding’s rich history.

“No one is going to rob a bank in a car that has a custom bright yellow paint job,” he says with a hint of sarcasm. “For most guys that I know, this is their baby. The last thing they want to do is jeopardize themselves in their car.”

Oriol has been documenting lowriders from inside the community for over two decades. His work has been featured in books, exhibitions and, most recently, the Netflix documentary L.A. Originals, which he produced and directed. As an L.A. Chicano, he says that lowriding is in his DNA—and that he’s been a lowrider since before he even owned a camera.

He remembers the excitement he felt when he bought his first lowrider—a Chevy Impala SS —in the late ‘80s. It was something he had wanted for a long time because the lowrider was the “car for our culture, like our version of the Fons.”

Although Oriol enjoys showing up to parties and events in his lowrider, the best part is getting to actually experience the drive.

“The Sixth Street Bridge going from East L.A. to downtown, that’s my favorite drive in L.A.” he says. “You can see the downtown skyline. You just start your music at that stoplight at Sixth and Boyle, and then you just cruise like 30 miles an hour. You take up the whole bridge with one song, drag it out. That’s how I like to end my lowrider day. There’s no better feeling.”

Nili Blanck is a writer based in Mexico City.