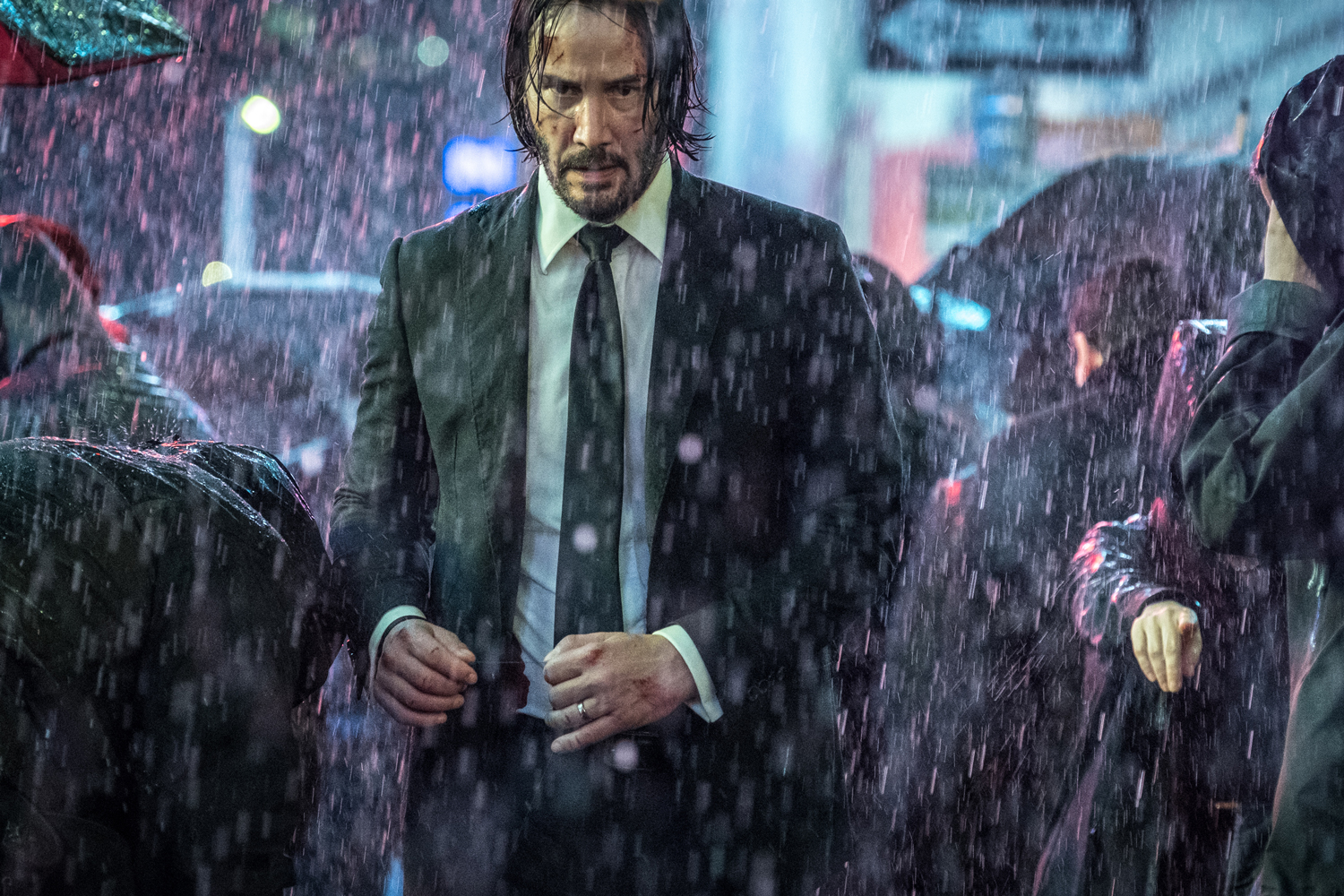 It was just a guy’s name. You could guess that he was played by Keanu Reeves, given that we’d seen laughing with a woman over a meal and kissing her against a picture-postcard vision of Manhattan’s skyline. Then we go from Sad Keanu sitting bedside in a hospital to Sadder Keanu standing graveside as a coffin is lowered into the ground. Later, he gets his wife’s posthumous gift to him: a puppy. The man and his dog, who is indeed adorable by any standard, tool around in his vintage Mustang. We know something else happened, because we’ve also briefly glimpsed Bloody Keanu, lying battered on a warehouse floor. But as far we knew, this was a movie about a gentleman — he’s called John — who lives in an exceedingly well-furnished apartment, is deep in the throes of grief and has only his faithful companion to help him move on. Maybe the pooch will teach him how to love again. Maybe he’ll meet someone nice at the dog park. The title told you nothing. It was just a guy’s name.

Let’s say a viewer was lucky enough to go in cold to John Wick back in 2014, knowing nothing else other than that it featured a movie star who had seen better box-office days. He or she might have suspected things were about to take a turn when some Russian guys start hassling him at a gas station. They like his car. Later, they pay him a visit and, well, you ever heard that George Lucas quote about the easiest way to get an audience emotionally involved is to have someone wring a kitten’s neck? It applies to other cute furry animals as well.

What folks probably didn’t know was that these young men, led by Game of Thrones‘ Alfie Allen, have just fucked with the wrong dude. The man they try to sell the hot vehicle, however? He knows it. The lead thug’s father, a Russian mob bigwig, knows it too. And once audiences watched commandos enter Wick’s house in the dead of night, high-powered guns drawn, and could see why this normal-seeming man inspired such fear throughout the toughest corners of the criminal underworld — well, now they understand as well. This isn’t a widower weepie, it turns out. It’s not even a standard revenge movie. This is the beginning of what would become the seriously batshit-crazy, go-for-broke, open-world action-flick franchise of the 21st century.

Yes, we know: “Hold my beer,” says the Fast & Furious films. But the fact that this statement no longer seems like your run-of-the-mill Reeves stanning or the result of a head injury is a testament to how this series has sold itself as a superior model of an old multiplex staple. Over three films this series has magpied the best of Hollywood stuntapaloozas and a host of hyperkinetic international subgenres, then shoved it all into one B-movie sausage skin. Bourne-style close combat, old-school car chases, Hong Kong action set pieces, Japanese yakuza honor stand-offs, gangster-film vendettas, several varieties of martial-arts fighting, knife fighting, sword fighting, point-blank gun fighting: you will find all of them seamlessly integrated here, and much of it performed by its surprisingly fit fiftysomething star. The Wick films gave Reeves a comeback and his third franchise to date. Its real currency, however, is cinematic carnage choreographed with panache, screen violence treated with a comprehensive yet bespoke sense of style. What other trilogy features a hospitality service that includes not just a wall of weaponry but a ballistics sommelier?

It’s right around the 38-minute mark of the original John Wick that our formerly retired master assassin — not the boogeyman but, per one character, “the one you send to kill the fucking boogeyman” — goes to rent a room so he can plan his attack in peace. The Continental could be any swank boutique hotel in downtown New York, but its clientele is more or less exclusive. It caters primarily to professional hit men. It’s run by Ian McShane, playing the 180-degree opposite of his Deadwood character. (Al Swearingen never did crossword puzzles.) And it’s a neutral zone, where “no business can be conducted on the premises without incurring heavy penalties.” There are codes to be followed, and consequences if you don’t, which one aspiring alpha finds out when she tries to off Wick in his room.

More importantly, it’s a brief peek through the portal of what feels like a much larger, deeper untapped sandbox, in which Wick’s vengeance-quest story is merely one among many. You don’t need a detailed universe to enjoy the primal pleasures of Reeves expertly taking down dozens of men (he’s obviously put in serious dojo hours), or the blend of creative firearm skills colloquially dubbed “gun fu,” or observing a bad guy who’s hit by a car then get shot through the vehicle’s roof as he tumbles over it. But this tiny conceptual touch makes a huge difference. It’s an expert bit of concise worldbuilding dropped into a project you might otherwise describe as “Keanu kills everyone.” It somehow places an oft-told tale of a hit man being dragged back into the game one last time into the center of an elaborate maze, where the minotaurs sport Russian-prison tattoos and the homeless guy around the hedge may be part of a deep-state criminal enterprise.

Per director Chad Stahelski, who’s helmed or co-helmed each chapter, there was never supposed to be a sequel. A stunt double and stand-in for Reeves on The Matrix, he’d initially been approached to co-ordinate some of the fight sequences on Wick; after reading David Kolstad’s script, he and his professional partner David Leitch pitched themselves as co-directors. The budget was $20 million. A box-office-gross of $88 million worldwide and the response to action sequences staged like musical numbers suggested that they’d hit upon something that struck a chord, so they went back to the well — and this is where the hint of bigger things dropped early paid dividends. Tolkien had a Middle Earth hierarchy of hobbits, wizards and orcs. Stahelski, Reeves and Kolstad had a global secret society of intramural syndicates, factions and criminal-catering industries that felt as varied as the action. A second film delivered more mix-and-match mayhem and gave us John’s Excellent Roman Adventure, not to mention this incredible paranoiac’s-wet-dream scene:

But it also posed questions: Who is “the High Table”? Where do these rockabilly secretaries responsible for assignments and accounts-payable data work, and how do you get recruited? How did Laurence Fishburne (hi, Morpheus!) establish his Bowery empire of derelicts and cast-offs? And what the hell is “excommunicado”?

It means that you’re out in the cold with a bounty on your head, which is where Chapter 3 — blessed (or cursed) with the Latin-for-“prepare for war” subtitle Parabellum — picks up, with Wick on the run and seeking sanctuary. The iceberg’s tip gets a few more inches revealed. Reeves’ fanbase will squeal at a direct Matrix shout-out and seeing this almost inhumanly in-shape middle-aged movie star absorb blows and hold his own in fights. (Say what you will about his signature monotone style of acting: This role is as perfectly tailored to his strengths as that bullet-stopping suit is to his frame.) Lance Reddick gets in on the firepower game and Fishburne returns for more prix-fixe scenery courses. Angelica Huston shows up with a borscht-thick accent and running a school for ballerinas and assassins (bullet ballets, indeed); Halle Berry pops up in Casablanca with crotch-biting dogs; Billions‘ Asia Kate Dillon plays someone called the Adjudicator and proves they have screen presence to spare. Ditto Mark Dacascos, who draws the straw for the Boss Level fight. Action-film connoisseurs will once again feel they’ve died and gone to heaven, or at least one of the Continental’s better lounges.

Yes, it’s another variation on the catch-and-release formula that’s allowed Wick to keep zipping from one highly choreographed bit of chaos to the next. Yet there’s more imagination and skill and verve and sheer star wattage in this new movie than 90% of everything else hitting screens, including blockbusters in which superheroes snap their fingers. And it’s this combo that has made this series damned near invaluable for those who like le cinema du adrenaline. It’s not even that it’s wholly original, in either concept or creative flourishes. The Bond films have given us weapons tinkerers before, and as critic Alison Willmore has pointed out, Parabellum‘s big motorcycle fight with katana swords owes a serious debt to the South Korean film The Villainess. The closest thing that the Wick series have to competition in the rock ’em-sock ’em department are the Raid movies coming out of Indonesia, and Chapter 3 co-opts two of that franchise’s players, Cecep Arif Rahman and Yayan Ruhian, for an extended Pencak Silat exhibition.

Rather, it’s that Staheski & Co’s pastiche curation has turned a star vehicle into a standard-setter for how to do big-screen-action-as-storytelling right. (It’s set to extend its universe to TV with an anthology show revolving around the comings and goings at the Continental as well.) Action films have become Big Macs. There’s a thrill in seeing someone take a recipe and add in unfamiliar yet complementary ingredients, give it an artisanal touch, put in the time to make it taste good even when served bloody rare. It’s transformed a B-movie series into A-plus genre outrageousness. It’s made one man’s name a shorthand for quality pandemonium.