How Vitamins Went From Medical Marvel to Marketing Scam

In the correct circumstances, vitamins can be extraordinarily effective, but the evidence has been marketed into oblivion. 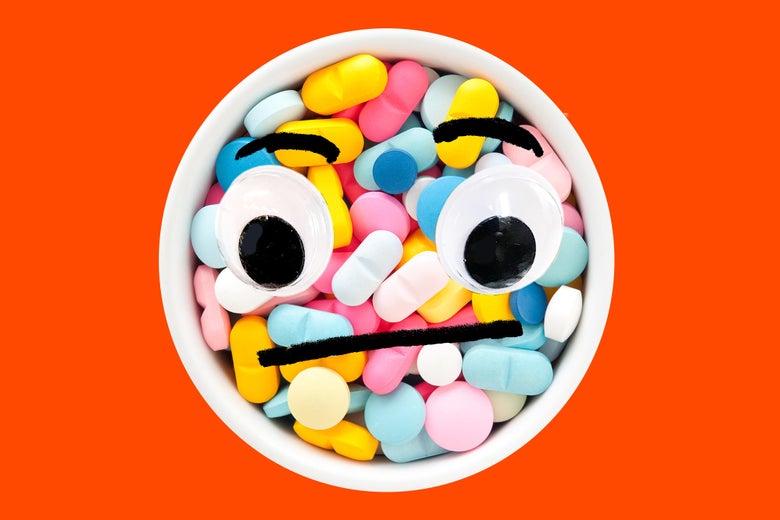 When I was in high school, I ran cross country. One fall, I mysteriously became slow. I felt like a video game character suddenly stuck on a harder setting. My coach insisted it must be mental; I tried pushing harder. Winter track season came, and nothing improved. Then, I tested positive for anemia and started taking iron supplements. By spring, I was back to running my fastest mile time yet.

Deployed correctly, vitamins can feel like magic. Their discovery is littered with stories like mine, in which these mysterious little components of food are shown to wield deep control over flesh. One of the first hints that food could contain such specific components with such specific influence over well-being came in 1816, when experimental physiologist François Magendie fed dogs a diet that was high in sugar and free of animals and plants. The dogs developed sores on their corneas and died. In the 1880s, Dutch physician Christiaan Eijkman studied a flock of chickens that had a tendency to wobble, fall over, and become unable to move; when he switched their diet from plain white rice to rice with husks (brown rice), they recovered. Lacking a modern conception of nutrition, Eijkman assumed that the white rice must somehow be toxic and that the husks were counteracting the bad stuff.

By 1912, we had learned that several diseases were caused not by germs and infection, but by a lack of crucial components of our diet. These were called “accessory food factors,” or “vitamins,” short for “vital amines” (at the time, scientists thought these mysterious things were proteins). Soon, with no evidence to support the proteins theory, there was lobbying to drop the e and to specifically recognize these products as a range of compounds that our bodies cannot produce but nonetheless need. Vitamin A, for example, is necessary for healthy eyes; vitamin B1 allows nerves to function. Iron helps transport oxygen around your body, and without enough of it, exercising is harder.

“We call them vitamins because they are vital,” says Kate Rowland, a physician at Rush Copley Medical Center. “Without them, terrible things happen.”

This reality makes vitamins extremely easy—perhaps too easy—to market and sell. Today, there’s an explosion of vitamin startups that operate on the idea that vitamins can work their wonders for most anyone. Ritual sells bottles of capsules—a reinvented multivitamin—that contain nine nutrients that are “essential for women” for $30 a month. From Goop, you can select from special blends like Balls in the Air (“for women who function at an intense pace”) and “Why Am I So Effing Tired?,” each $75 for an ongoing monthly supply. Care/of takes these concepts one step further and offers users a personal quiz that will allow them to create a personalized blend of supplements, with a price that varies based on the outcome but seems to be around $40. Essentially, a multivitamin just for you.

If vitamins themselves are, at certain times, extremely worthwhile, are the daily regimens sold by these companies worth it, too?

I start my journey to find out by taking Care/of’s quiz: I tell Care/of that I am 28 and I am interested in maintaining my general health. The quiz tells me we can set goals related to a laundry list of concerns—energy, hair, brains, bones. I tell the quiz that yes, sometimes I feel fatigued, and slumpy, particularly in the afternoon, and also that my hair is a little dry. The quiz asks me how often I eat vegetables, dairy, meat, and fish; how much alcohol I drink; if my doctor has recommended that I get more iron (which feels like cheating); and if I’m skeptical of supplements (which feels like a psychological trick). It processes my answers by, as the bubbles that appear tell me, “checking research.” And then, having apparently consulted the scientific literature, Care/of recommends I take a whopping $43 in vitamins and minerals a month, which it is, of course, uniquely positioned to sell me. Care/of’s vitamins arrive in a stylish dispenser, which gives me my daily packet. Each one greets me with a “Hi Shannon” and offers a quote, or fact, or “challenge” of the day. (Sample challenge: “Stop and smell a flower. No really, an actual flower.”)

When I first emailed Rowland to get an expert’s opinion as to whether all this is necessary, she immediately wrote me back with her main piece of advice on how to buy supplements: “in the largest containers Walgreens will sell, if you’re gonna.” There’s no doubt that supplements are less expensive elsewhere: For $11 on Amazon, about the price of two months of iron via Care/of, I can buy a supply of iron that will last me an entire year. This means no page-a-day style quotes, but it also means no hard-to-open packaging (each individual Care/of plastic packet is child-proof, because of the iron—I frequently find myself resorting to scissors to get them open).

When I talk to Rowland later, on the phone, she elaborated on her theory that the whole vitamin enterprise probably isn’t necessary for most people. Vitamins are vital, but most of us get the ones we need in our own diets, she explained. Nonetheless, about half of Americans pop supplements. Most are taken without the recommendation of a doctor, a 2013 Journal of the American Medical Association investigation suggests, and most with the goal of maintaining or improving health, rather than filling gaps in diet. I have, multiple times in my life, started furiously taking biotin in attempt to make my hair and nails stronger, even though the actual evidence for taking biotin is based on tiny studies of people who display signs of a deficiency. Because I said I wanted healthy hair, Care/of recommended biotin, too, along with a few papers—none of which provided evidence that someone with my hair type could benefit from the stuff.

The notion that vitamins could push us above and beyond the typical limits of our bodies comes from chemist Linus Pauling, argues pediatrician Paul Offit in Do You Believe in Magic? The Sense and Nonsense of Alternative Medicine. Starting in 1966, Pauling, a two-time Nobel Prize winner for his work on chemical bonds and writing against nuclear weapons, exuberantly took large doses of vitamin C. While some vitamin C is necessary for the immune system to function, Pauling incorrectly believed that if everyone took extra, the common cold could be eradicated and cancer deaths reduced, along with a slew of other wild health claims. He was wrong. Sure, iron can be critical to having energy to run, but piling extra into your system isn’t going to make you an Olympian. He took the magic, and took it too far.

Eliseo Guallar, a professor at Johns Hopkins, sees vitamins as offering most people a “false sense of protection” and marvels at Americans’ commitment to taking them despite a lack of evidence that they should. Guallar is the co-author of an Annals of Internal Medicine editorial titled, “Enough Is Enough: Stop Wasting Money on Vitamin and Mineral Supplements,” which notes that there is no evidence that, taken preventively, vitamins will help stave off disease. Most are probably neither helpful nor harmful (he says, though, that some can be iffy in high doses, like vitamin E, which might increase the risk of prostate cancer).There are also many instances of supplements containing unapproved and potentially harmful ingredients. To Care/of’s credit, it doesn’t recommend vitamins totally willy-nilly: When I retook the quiz answering all questions as an imaginary perfectly healthy person, with no specific health goals, it only recommended one thing, a $5/month shipment of vitamin D. This was based solely on the fact that I live in a Northern state, rather than the amount of time I spend in the sun, and is somewhat questionable, given the lack of conclusive evidence vitamin D deficiencies can even be fixed with a supplement. Despite this, Care/of rates the research on vitamin D as “very strong.”

In cases where vitamins are truly useful—to address a specific deficit with a supplement known to work well—the best way to determine that you need them is to consult a medical professional, not an internet quiz. Even the doctor I spoke to who recommended that most people consider supplements, Monya De, noted that she also recommends “that patients get tested to determine what their vitamin and mineral deficiencies actually are.” My own iron supplement miracle was the result of a blood test, not an educated guess. And what if I had been “so effing tired” not because of anemia but some other more serious, tricky-to-detect disease?

Care/of, ultimately, offers what any other supplement companies offer: a good feeling, a glow of being healthy with minimal effort. In a world of expensive health care and uncertain outcomes, it’s a nice idea that you could take a survey and get sent an easy plan to better yourself, one based on science (even if it’s irrelevant science). Plus, the little packets look cute and official; it’s kind of hard to believe that something designed with such attention and care won’t work. After I know the pills are probably useless, it’s hard to resist continuing to take them, even if they haven’t made me feel any different. But finally, with no evidence that this money was well-spent, I made sure to unsubscribe.

Shannon Palus is a staff writer for Slate.