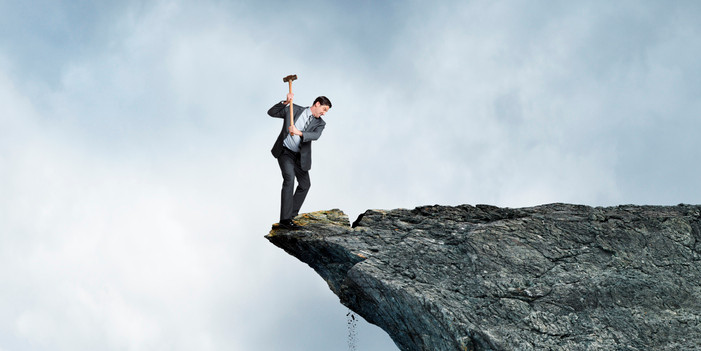 It’s finally happening. You’re about to get that big promotion. You’re on the cusp of landing that enormous client. There’s interest in your book proposal.

Then, you miss a big deadline, make a preventable mistake, or otherwise do something that could undermine all of your hard work. If you’ve ever been on the cusp of achieving something big, then done something dumb to screw it up, you might be engaging in workplace self-sabotage.

“Unfortunately, it’s extremely common,” says organizational psychologist Laura Gallaher, founder and CEO of Gallaher Edge, a leadership and behavioral science consulting firm. “Another way I look at self-sabotage is people getting in their own way.”

The triggers for undermining our own hard work aren’t always obvious, but there are some ways to recognize and stop the behaviors. Here are some things to keep in mind:

Why We Do It

Why would someone deliberately hurt their own efforts to get ahead? Sometimes, the motivation is rooted in self-protection, Gallaher says. “First and foremost, [self-sabotage is] when humans are making choices, to actually protect themselves against internal feelings about themselves that are painful and they want to avoid,” she says. “It ends up distorting how they see the world, and it makes them feel less effective in their behavior.”

Award-winning jazz keyboardist and entrepreneur Marcus Johnson, author of For the Love of…Living the Journey of Life with Intention, Love, Passion, and Happiness, says that part of the reason he sees people self-sabotage is that they were never taught to manage success. The thought that we could move on and become something more may threaten the relationships we have or the way we see ourselves, and that could cause disconnection from the people we care about, he says. That can create fear of being alone. “[You] trigger your sympathetic nervous system, into fight or flight to make you stop doing what you’re doing at a level of success, because you fear that you will be alienated from those who you care about, or those who you think that have your best interest [in mind],” he says.

Good, old-fashioned impostor syndrome can be a contributing factor, too, says organizational psychologist Katy Caselli, founder and president of Building Giants, LLC, a workforce development training firm. We fear we’re not capable of doing that thing we want to do, or we’re afraid others will think we’re unqualified. “I talk to so many people who are being stopped by fear,” Caselli says. “If they could just kind of nudge themselves through that, then those future pathways will be so much easier.”

How to Recognize It

The way we engage in self-sabotage can take a number of forms, Gallaher says. It may present in defensiveness and the physiological response that a defensive state triggers. That self-protection mode makes it difficult to hear feedback or information clearly, she says.

Caselli says it’s common for self-sabotagers to engage in negative interactions in the office, such as negative talk, badmouthing co-workers, or gossip, which can ultimately lead to negative consequences. Disengagement and procrastination are also common, she says. Being “checked out” may be a form of protection. “Maybe they got some feedback that really stings them,” she says. “And they say, ‘Well, fine, I’m not going to put my neck out there.'” By withdrawing, they may become more careless and prone to mistakes or they may seem as if they are willfully ignoring well-intentioned advice. “They have a hard time recovering from what may be a coaching moment or a feedback moment where their boss or someone else is trying to get them going in the right direction,” she says.

Self-sabotaging behavior may also be a sign of a more serious issue like burnout or depression, so be sure to examine whether the issue needs to be addressed with a mental health or health care professional, Caselli says.

How We Can Prevent It

Left unchecked, self-sabotaging behaviors can infect cultures, Gallaher says. “Anybody who’s coming into that culture, that organization, looks around and they start to think, ‘Okay, this is how it’s done here,'” she says.

Preventing self-sabotage begins with self-awareness, Gallaher adds. The more you can be honest with yourself and accept yourself the way you are, the better able you are to quiet the “mean girl” voice that can set off these behaviors, she says. Negative self-talk can exacerbate impostor syndrome and make it seem easier to withdraw and detach from accomplishments and goals.

Johnson often sees self-sabotage in the creative and business worlds. The most successful people he knows create systems and support in their lives to help them avoid such destructive behaviors. For example, having mentors or close professional colleagues who can understand the challenges or obstacle you’re facing and help you get perspective can short-circuit the tendency to avoid situations that may stretch our capabilities and help us grow, he says. Develop habits that support the behaviors and achievements you want in your life, he says. And when you do find yourself undermining your own goals, call yourself out.

“If you don’t acknowledge it, then there’s no way for you to deal with it,” he says. Then, once you do name the behaviors, explore the underlying feelings and what’s causing them. That’s when you can begin to find the people, resources, and solutions you need to stop the painful cycle.