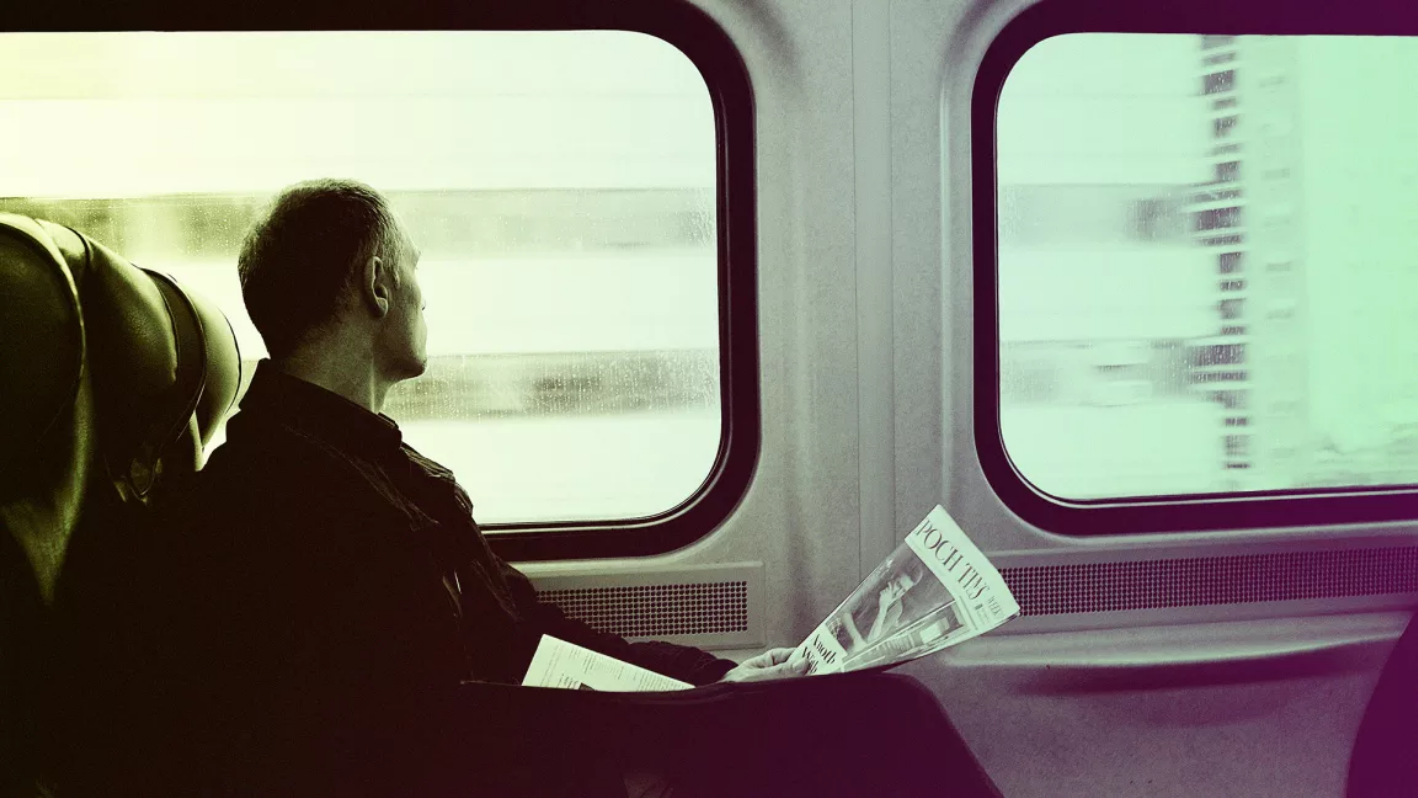 More than clickbait, more than a mobile strategy, more even than factual accuracy, what the media has needed for over a decade is a mighty subject.

That great white–er, orange–whale has arrived at last, just in time to remind the media, after the confidence-shaking earthquake of digitization, how journalism should be done. How it should be produced, and how it should be read.

A flashback: In Sister Carrie, Theodore Dreiser’s runaway 1900 bestseller about a pretty woman who uses men on her way to becoming a Broadway star, there’s a vivid account of how to read a newspaper. The troubled Hurstwood, one of the men Carrie uses, approached the evening papers this way: “He buried himself in his papers and read. Oh, the rest of it!–the relief from walking and thinking!”

Key takeaway: The news, at its best, is often an indulgence, a relief, an escape from one’s own troubles, a flight from the mundane. It can also be a chance to live in a heroic moral realm that gratifies both our greater and our lesser angels. It can be adrenaline. News is not a civic chore. In fact, to treat reading the news as a duty is to treat ice cream like mustard greens–to believe readers must be tricked into eating it, and thus guarantee that they rarely will.

I’m going to propose that we should read news sites as ice cream–not as an obligation, but for stimulation, escapism, and even righteousness. This is how newspapers have been read in their many heydays, and how they are meant to be read. At the same time we must admit to ourselves that–far from being a duty–news in heated times (and in the age of Twitter) can often represent a full-tilt compulsion, and thus a habit to be judiciously managed.

In Sister Carrie, Hurstwood’s relief comes from diverting stories, like this beaut: “Here was a young handsome handsome woman…suing a rich, fat, candy-making husband for divorce.” But soon after the divorce story, he reads a report of a strike by motormen, also in Brooklyn. This story doesn’t simply distract from his suffering, but ennobles it. It does so by lifting his life out of the commonplace and making it part of a grand master narrative.

At the turn of the last century, of course, that narrative was Capital v. Labor, and it convulsed American minds, big and little, rich and poor. Who would win? It was Lakers v. Celtics, Alabama v. Auburn, the two sides of the Force. You chose sides, and a victory for your side–a successful strike, say, or the advance of trust-busting legislation–could viscerally be considered a personal victory that you’d feel from head to toe. Of course, you lost sometimes too, and walked around soul-sick.

For Hurstwood, who once worked in management, the Capital v. Labor war is spellbinding, all-consuming.  As he reads about the strike, he’s torn. He knows–as we know now while reading about, say, the special election in Georgia that might flip Atlanta’s 6th district for the Democrat Jon Ossoff (and thus deal a blow to Trump’s dominion)–this strike represents a chance for both courage and cowardice.

Hurstwood is newly out of money and he is looking for a job as a laborer–but he’s inclined against labor since he’s from management, from the Other Side. So he’s trying to decide if he’ll scab (work) on the trollies as union motormen are striking for a pay raise. Every part of him is agitated by this moral and personal decision. He comes to believe he will either rise to the occasion, or crash on its shoals. (As it happens, he crashes.)

The literal crossing and recrossing of lines entailed by moving from management to labor, and then scabbing, is so monumental that it can be compared to other moral crucibles in our nation. What lines would Rosa Parks and other great Americans protesting segregation cross? What about a hundred years earlier, in the lines drawn between the Union and the Confederacy? When a person read a newspaper in the 1860s or 1960s, everything from the celebrity news to the want ads could seem like an entry in a holy war.

This sounds familiar. All-consuming suspense and scorekeeping on what sounds like a heroic key is back. It’s palpable. It’s personal (just spend a few minutes on social media, if you don’t believe me). If you despise Trump’s apparent ties to Russia, but also decry identity politics, have you crossed lines? What about if you supported Bernie Sanders, or skipped the world-historical women’s march? Even the minutiae of everyday decisions–to dodge a Trump discussion, or jump right in–suggest existential struggles.

The Trump presidency seems epic in the truest sense, in that it is measurably rattling the American experiment, the Pax Americana; it is testing whether our nation, dedicated to and conceived in liberty, can long endure, given that there are shadowy threats lurking: threats to our free press, threats to our constitutional set of checks and balances.

And so we read the news the way Hurstwood did–not only for diversion, but as scorekeepers. Are my warriors winning or losing? Is good beating bad? Will I morally wither–or courageously fight for others? It’s all mixed up together. If this suspense for our republic’s future doesn’t put you on the edge of your seat, and at the craven mercy of media, nothing will.

This new avidity and readerly sense of purpose began about a year ago, during the psychic upheaval of the presidential primaries, with the repeated shocks to our society’s manners, morals, and politics. The work of “being informed”–so long preached in social studies classes–now felt like the opposite of work. You didn’t have to force yourself to read the news. You had to force yourself to take a break. Every article seemed an entry to a life-or-death battle. On home pages and front pages–and especially on Facebook and Twitter, where news is  contextualized with max torque by fellow travelers who generally wear our colors–were and are numberless opportunities for agony or ecstasy.

Indeed, lately, the Trump-Russia story has offered so much intrigue that it’s common for people to treat its details not as homework but as an IMAX spectacle, with the popcorn emoji often attending a link to the latest plot twist.

Even a seeming distraction from the main event–the death of George Michael, say, in late December–now carries vast themes for humanity. The gay icon was framed by some as yet another martyr to Trump-style anti-progressivism, and it deepened the left’s grieving over Trump’s victory. Then there was the Patriots’ late-game triumph in the Super Bowl: Trump claimed Tom Brady, the team’s quarterback, as a friend, and the Patriots won against predictions. On Twitter, some Trump fans took the Patriots’ win as further proof that true patriots were taking back the nation. In the trending stories that play on Apple News, the ones about Trump or his administration read as skirmishes in the broader war, while the ones that ignore him–Time‘s recent “Why Spring is the Perfect Time to Take Your Workout Outdoors,” for example–seem like manipulative denial and distraction. Or they do to me, anyway. How can anyone talk about workouts at a time like this?

There is everything to be gained by cultivating a personal stake in the lives of others, in the future of our nation, and in the world. But reading the front section as if it were the sports pages, with every line a credit or debit, a win, or a loss, has hazards. You begin to twist what you read. For example, news that attacks on Jewish Community Centers were carried out by an Israeli could be seen as a “loss”–confirmation of Trump’s view that hate crimes can be false-flag events. The news that a white supremacist killed a black New Yorker with a sword, by contrast, can be framed, shamefully, as a win. How in the world is racist murder a win? Because it’s proof that hate crimes are up under Trump. This is a sick way to think, I know. It’s what happens when the public’s consumption of news becomes too much about sides, about winning and losing, and less about empathy for our fellow men.

So how do we combat this? By increasing our literacy. To become a better reader, we must borrow practices from higher-order reading, including the reading of fiction. Remember that the best characters and novels–and every single flesh-and-blood human and real-life event–mix good and evil. Suspend judgement, especially on the complex and sensitive matter of the Russia-Trump ties. Aim to identify with the players without projection or hope. Let yourself be surprised by evidence that doesn’t fit your hypothesis. Take breaks.

But also, keep reading. It’s quite a story. And you’re part of it.