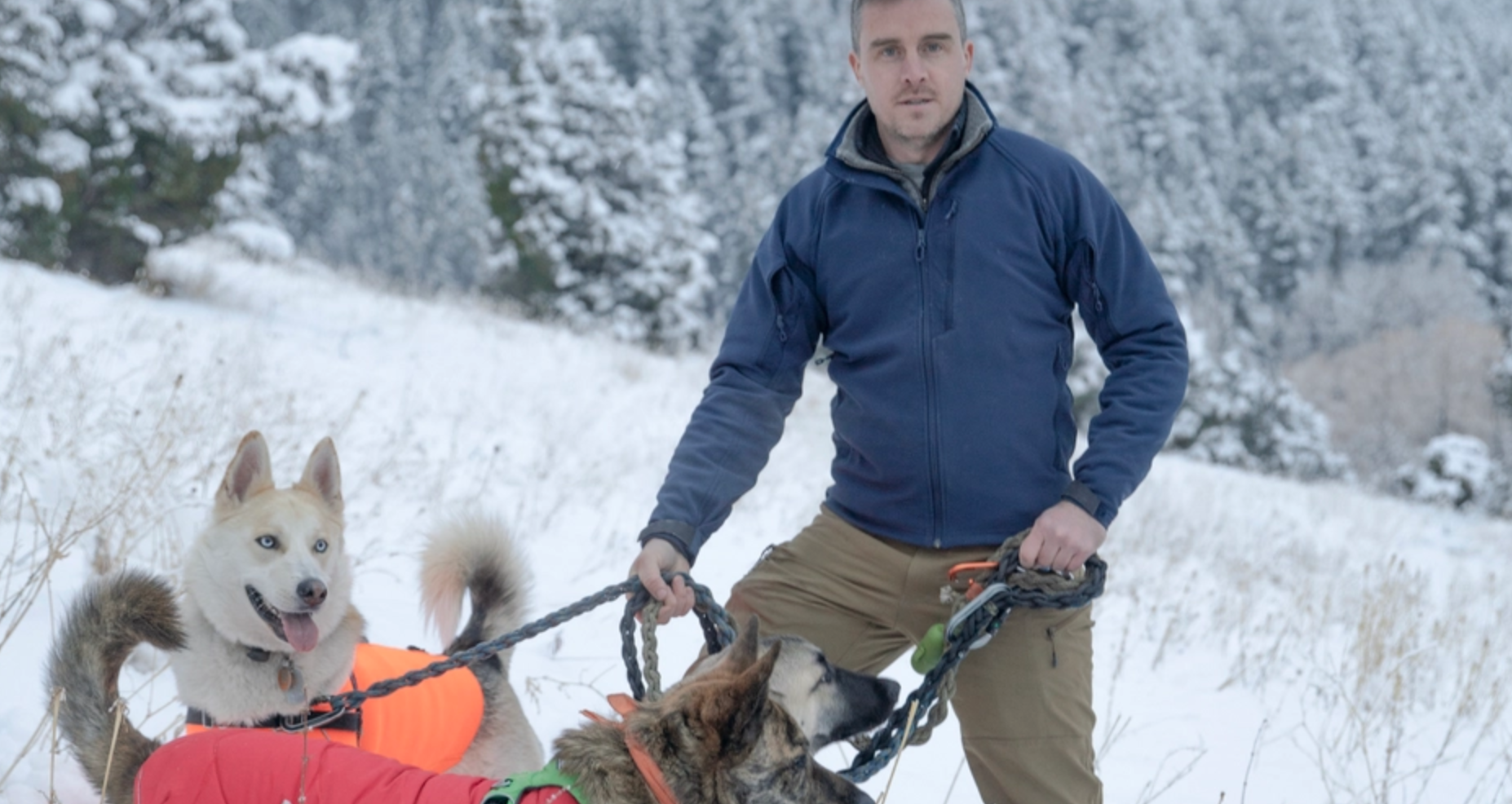 I picked out my last two dogs on the Internet, with not much more than a photo and a brief description to go off of. And I got right both times. At the request of friends and family wondering how to do the same, here’s my complete method.

Which Breed Is Right for You?

Are you a golden retriever person? Maybe you like Weimaraners. Having a preference for a certain kind of dog is totally normal and likely based on a lifetime of indoctrination that I’m not going to be able to overcome in this article. But you have to understand that the supposed merits of "pure bred” dogs are largely a case of marketing, and marketing is designed to manipulate you.

Thanks to all the brand’s ad buys, you might really identify with the rugged, all-weather ability—combined with the plucky anti-establishment vibe—of a Subaru. But I'd argue that it’d be an even better car if Honda made its motor and Audi supplied the interior. Now imagine if someone was prepared to give you such an improved car not for more money but for free…

Well, that’s exactly what you’d get if you adopted a mixed-breed dog. You can still choose a look and some alleged personality traits of a breed that speaks to you, then you can reduce its health problems, ensure that it’s sane, and make it totally unique by adopting a mix with your breed of choice in it. (If you want to read more about the health benefits of mutts, read this.)

That’s what we did with Bowie. Virginia’s always wanted a Siberian husky, but I prefer dogs that are a little larger than those scrawny little rascals and that are easier to train. So when a husky-German shepherd puppy in need of a good home popped up on Instagram, I tracked him down, we video chatted with his family, then decided to bring him home. A year and a half later, he’s proved to be the most easily trainable and intelligent dog I’ve ever had, by far the most athletic, has never had even an inkling of a health concern (not even fleas), and everyone who meets him seems to agree that he’s the most handsome pup they’ve seen. If I sound like a proud dad, well, it's because I am. That’s a way better package than any pure bred husky would have given us. 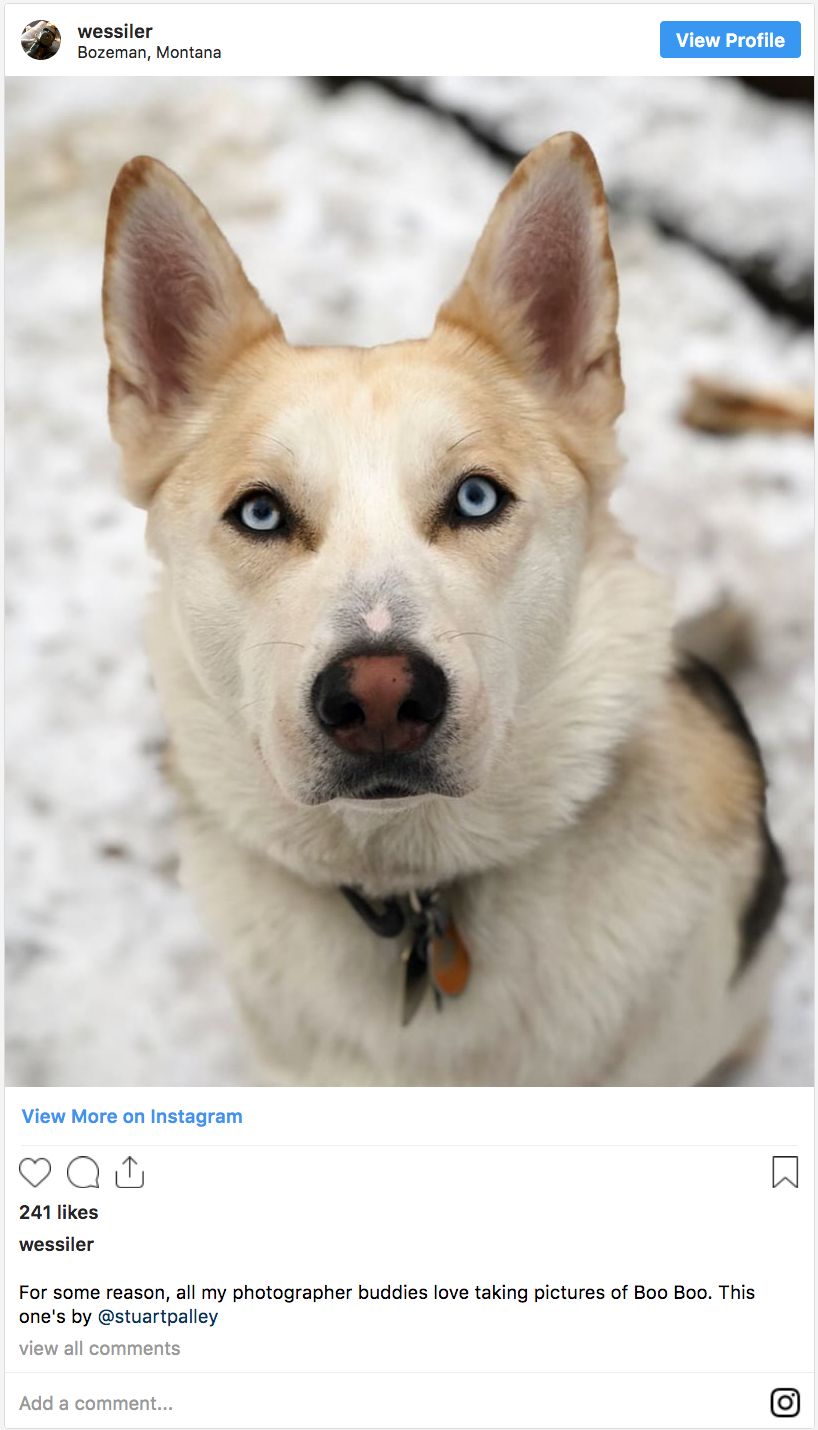 How Old Do You Want Your Dog to Be?

Adopting an eight-week-old puppy gives you the most control over the dog’s development possible, but it’s also an all-consuming commitment. You will be cleaning pee and poop, you will not be sleeping, and you will lose furniture, clothing, and other possessions to the process.

Adopting a juvenile dog (say one to three years old), still gets you in at a time when their personalities are pliable, and gets you past all that puppy hassle. But they will come with some personality traits gained from whatever they were doing before you came along.

Adopting an adult dog nets you less frenetic energy and the ability to see their mature personality and physical form before you commit. But that personality will now be largely set and training may take more time than it would with a younger animal. An adult dog is also more likely to come with some behavior issues, but you will at least likely be able to identify those issues ahead of time.

Adopting a senior dog is a noble thing to do and it means you’ll get a dog that’s going to be calm and grateful for its new home and family. But you are potentially taking on health problems, your dog’s ability to keep up outdoors may be limited, and your time with it may be short.

Teddy was about five months old when we adopted her two months ago. That’s proven to be sort of an awkward age, as she’s still going through the last throes of potty training, while also coming to us with the experience of running feral and likely being physically abused at some point. That means she shows signs of fear and uncertainty easily, and is hyper-competitive with our other dogs for resources. We’re applying plenty of patience, consistency, and nurture, but looking at her objectively, we still got kind of the worst of both worlds—a puppy level of commitment, with the personality foibles of a juvenile rescue. We’re okay with that, but she’d be a difficult dog in the wrong hands. (I’ve previously written more about socializing and training your dog.) 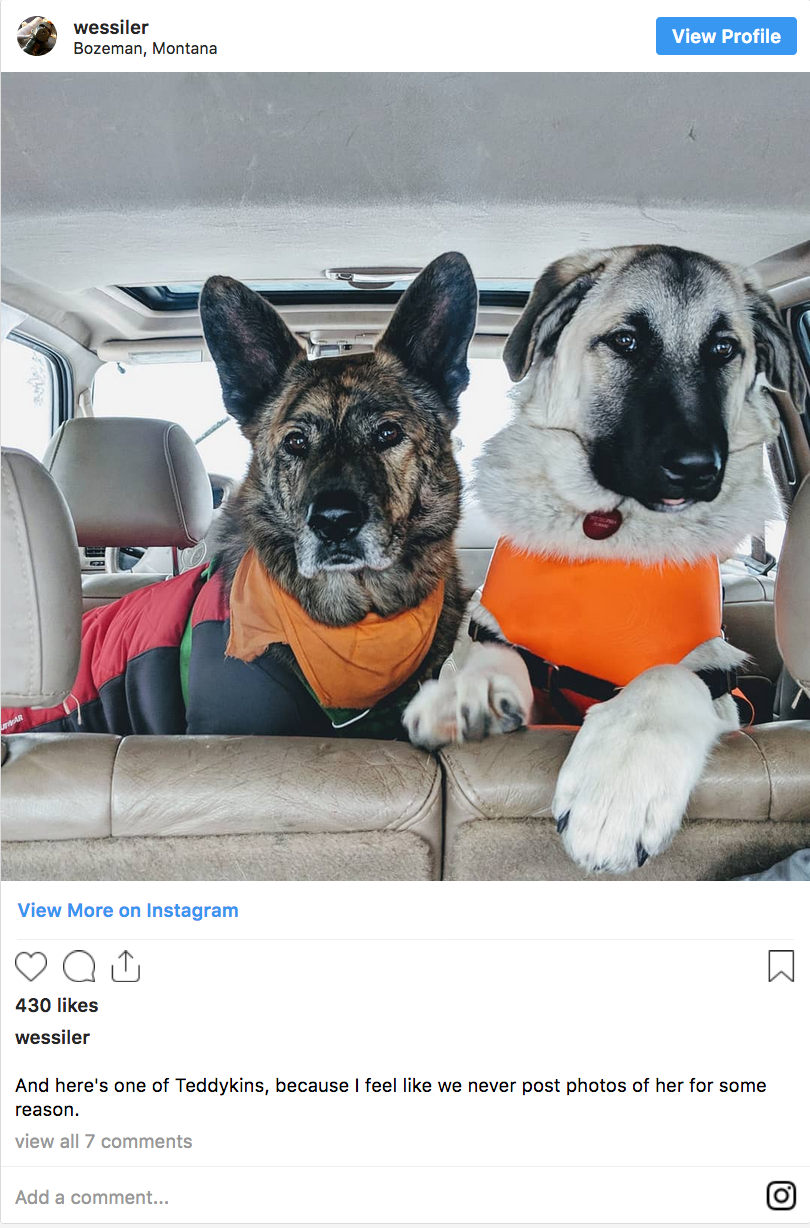 What Size Dog Do You Want?

You’re reading this in Outside, so I’m going to assume you like doing stuff outdoors. It also likely means that you live in a city. That can create problems for potential dog owners, who may be subject to size restrictions, but need a dog large enough to join them outdoors safely. If you live in or visit places with coyotes, that’s something you need to consider carefully. A coyote will have no trouble carrying off a dog weighing up to 30 pounds, and you probably want your dog to be at least 45 pounds or so if you want peace of mind on off-leash hikes and camping trips or just while your dog plays in the yard.

Because larger dogs are generally calmer dogs, they can actually make better companions if you live in an apartment or small home. Just make sure you’re aware of any potential size restrictions before getting your heart set on a new buddy.

Beyond the need to worry about coyotes and the tendency of larger dogs to be calmer, I struggle to see a practical consideration in choosing the size of a dog. Dogs can get in and out of cars themselves, so there’s really never much need to lift them up or carry them around. I guess larger dogs do eat more, but since you’ll be feeding him an affordable, healthy raw food diet anyways, that cost isn’t a huge concern. But you probably do have a personal size preference, so just go with that.

How Do You Tell If a Dog Is Healthy and Good Tempered?

This can be a difficult one, especially if you’re adopting a dog like Teddy, who had a difficult life before winding up at a rescue center. She was scrawny, dirty, and what little she had been eating obviously hadn’t been all that good for her. Her fur was matted, lacked shine, and stunk to high heaven.

But the good news was that she was a mutt and she hadn’t come from a puppy mill. Those two factors together generally result in a healthy animal.

Still, it was crucial that I made sure she was healthy both physically and mentally before deciding to bring her home. My first resource was the rescue organization itself. People who run those tend to be pretty experienced with dogs, and are invested in making sure their animals go to the right homes. So, I called up the woman who runs this one on the phone, and had a sincere and honest conversation with her about our needs and wants, and the dogs in her care.

That conversation resulted in two siblings of interest. Driving up there, I actually thought we’d end up adopting Teddy’s sister, but on initial interactions with them, it was Teddy who appeared to be more interested in and appreciative of our attention. I felt her over to see if anything felt out of place or if she reacted to any sore spots. I made sure her teeth, gums, eyes, and paws all looked healthy. I looked inside her ears for signs of infection or sensitivity. Then I looked in her eyes and saw a soul. Just to make sure, I got our dogs out of the car and let them all interact off-leash to make sure they got along. They did, and that was it: she was our dog.

Determining a dog’s physical health can be hard if you’re not an experienced dog owner. If you’re not, I’d encourage you to take one with you to the pound or rescue center for advice. But determining a dog’s personality is a lot easier. Dogs evolved specifically to be our companions, so their expressions and body language are designed to communicate with us and we’re adapted to understand them. Trust your gut, basically.

Make sure you take all members of the family, canine or human, who will be living with the dog, and observe how they all interact. Approach the dog calmly, and so long as it doesn’t appear fearful or aggressive, pet, handle, and cuddle it. You want a dog that enjoys all that. Put it on a leash, and walk it around the block, observing how it interacts with you and the world. In a fenced location, watch it interact with other dogs. Call it over and feed it a treat. Is it as interested in you as it is in other stuff? Through all that, just ask yourself if it looks like the dog you want.

As a note: Please don’t adopt a dog that shows signs of fear or aggression (the PC way to say this is “reactive”) unless you have significant experience with such animals and live somewhere that the animal won’t have to interact with strange people and other dogs every day. A lot of people bite off more than they can chew trying to rescue an otherwise sweet dog with aggression issues and that ends up not only ruining their life, but burdening other dog owners. That crazy person at the dog park screaming at you because your good dog committed the grievous sin of sniffing their dog’s butt? That’s someone who shouldn’t have adopted an aggressive dog. 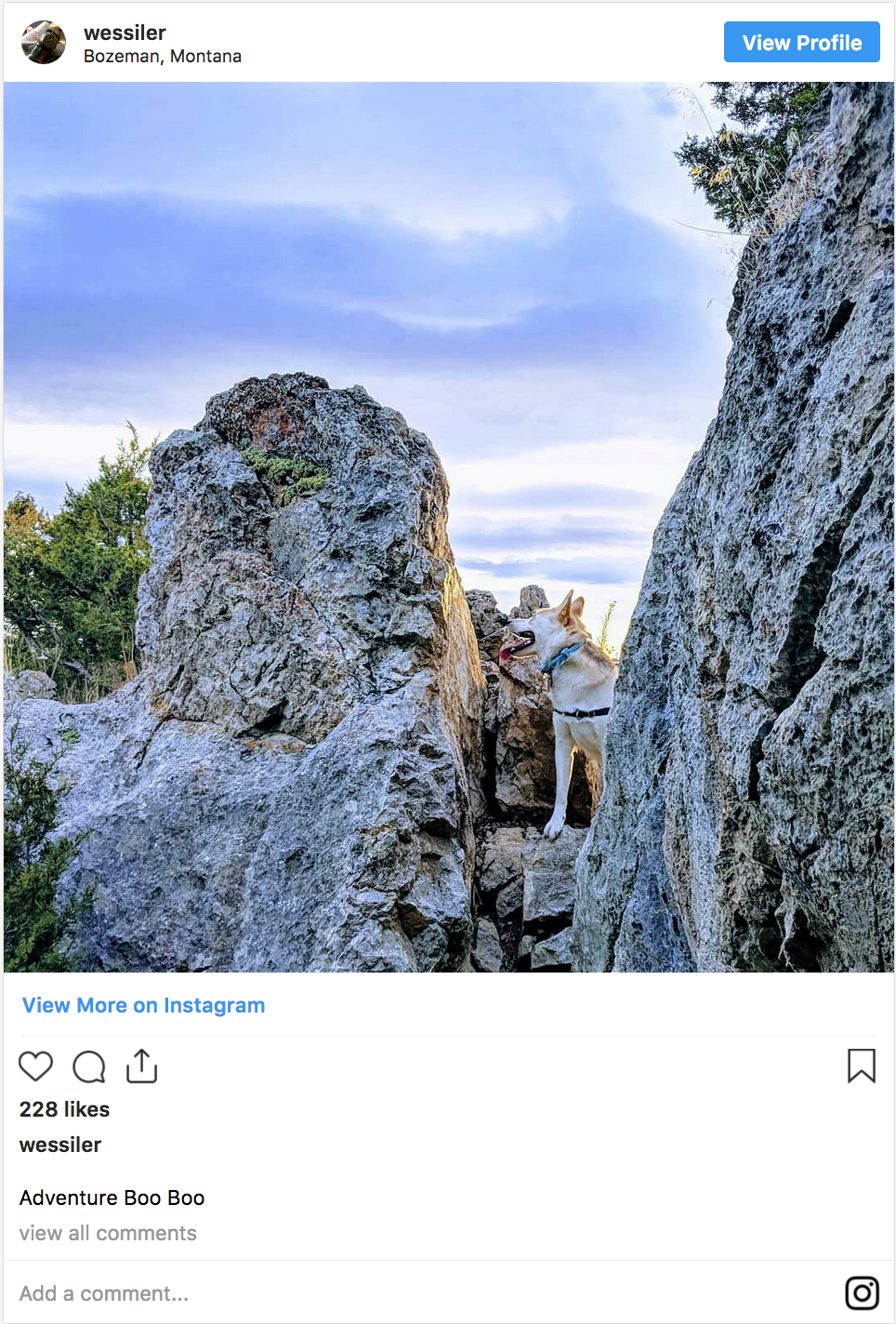 Nurture Is More Important Than Nature

Ethically speaking, there is no moral argument for purchasing a pure breed. According to the Humane Society, 3.9 million dogs enter shelters each year in America, of which 1.2 million are euthanized. Every single one of those could have been a good member of someone’s family.

Our oldest mutt, Wiley, is as good at fighting bears as a Karelian bear dog. Bowie will make a great therapy dog at my fiancée’s mental health clinic as his puppy energy continues abating. We’ve had Teddy for two months, and she’s already the sweetest, calmest dog I’ve ever had. None of that is reliant on anything inherent in their breeding (or lack thereof); it’s a combination of their unique personalities and the way in which we’ve shaped those during the time that we’ve owned them.

You should set yourself up for success by following the advice I laid out above or that of any vet or qualified dog trainer. But you also have to realize that your dog will only ever be what you make it. The right dog for you is the one shaped over time through a deliberate program of socialization and training. There is no shortcut; a good dog is not something you buy, it is something you create.