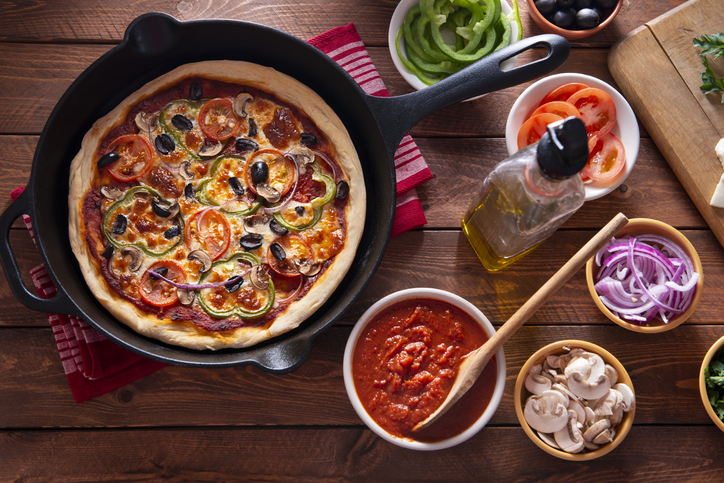 The pan-and-grill method is a vast improvement if you have only got a domestic oven. Photo by rudisill/Getty Images

Alot has changed in the past year. What has not is Britain’s love of pizza. From the spike in sales of wood-fired ovens to Pizza Express’s new home pizza kits, the nation’s appetite for hot crust continues to develop like 48-hour fermented sourdough.

According to cookware retailer Lakeland, 33% of people in the UK have made their own pizza from scratch. More than one-fifth of those who had done so own a pizza oven. There exists a coterie of foodies who, armed with portable Ooni or small clay pizza oven (both renowned for hitting the 500C required for Neapolitan-style pizza), are geekily absorbed in Italian flour grades and kiln-dried fuel options: fast-burning, hot birch wood for pizza; ash for lower, slower roasting.

Yet, says Lisa Richards, co-owner of Margate’s Great British Pizza Co, a good slice is difficult. “A couple of friends got ovens in the first lockdown and were like: ‘Yeah, we’re going to smash pizza.’ Then the ‘This is harder than it looks’ messages started. I’ve seen some disasters.”

Even if you can now knock out a passable margherita, perfecting that and then creatively combining pizza toppings requires dedication, imagination and, possibly, a complete rethink of the process.

“You can’t make what a pizzaiolo makes in a pizzeria,” insists Calvin Kitchin, owner of Cal’s Own in Newcastle. Domestic ovens are not hot enough. “People know that in Italy.” Instead, Kitchin suggest cooking so-called “grandma pizza” in an oiled baking tray.

Possibly created by expat nonnas in Long Island, this style (a thinner, unproven cousin of the deep-pan Sicilian sfincione) is a rough’n’ready shortcut using fast-acting yeast, but it’s reliable, once you nail the desired dough depth. “It’s akin to baking bread. Domestic ovens do it well,” says Jonny Heyes, owner and pizza chef at Manchester’s Common.

If you insist on trying to create soft, floppy Neapolitan-style pizza in a domestic oven – or, more sensibly, something akin to a sturdier NY-style slice or crisper, breadier, classic Roman-style pizza – the hack that experts rave about is the skillet-and-broiler method (pan-and-grill on this side of the Atlantic). You heat a steel or preferably cast-iron frying pan (do not use non-stick) until it is incredibly hot, slide the pizza base in, build the pizza in the pan, then, after a couple of minutes, place it under a similarly maxed-out grill until, supposedly, your pizza is bubbling and charred like the best professional example.

There are numerous instructional articles online. “The trick is to get it set and a quick rise before the bottom becomes charcoal, then transfer to a grill, centimetres from the element. The ideal is leopard-spotted crust and toppings just starting to catch on their edges,” says George Leigh of Otto in Birmingham. But he warns: “The first one is almost always a dud. Don’t use all your ingredients.” 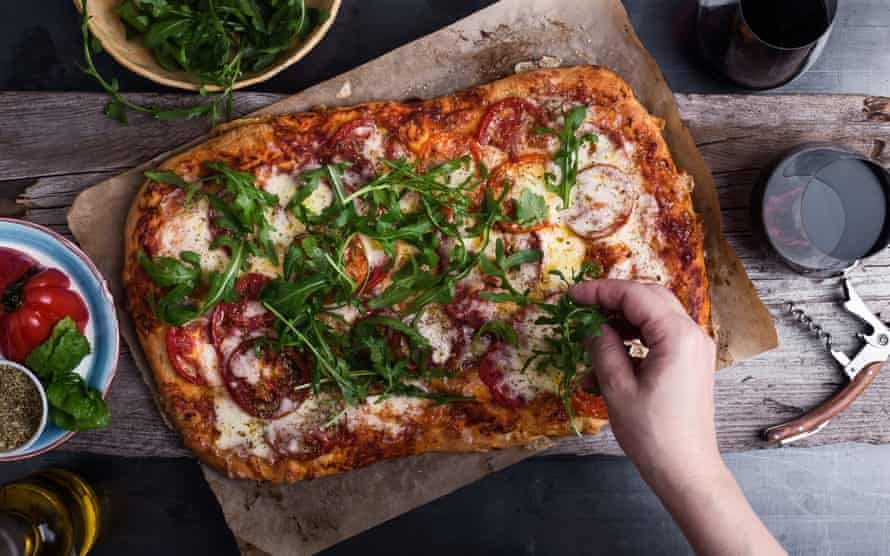 Whether using Italian 00 flour (elastic, chewy base), stronger UK bread flours (crisper, stronger base) or a mix of the two, you need a flour of 12-14% protein in order to create the gluten web that supports stretchy, aerated dough. Beyond that, however, to what extent you dilute your dough with water to soften it, the yeast you use, how long you prove it or what you add (semolina flour for bite, say) is up for grabs. For instance, you could try 5-10% rye flour, or a little wholemeal in the mix. “A more interesting flour mix adds layers of flavour, as a sourdough starter adds complexity and acidity,” says Pamela Yung, who uses heritage wheat flours at London’s ASAP Pizza.

“A little sugar and olive oil helps the dough caramelise,” says Heyes. “But the main thing is time. Make your dough the day before.”

Settling On a Sauce

Helen Collier, co-owner of Pizza Fella in Leeds, is a purist. “Don’t mess, use quality tomatoes, add salt. That’s it.” You can work wonders with tinned tomatoes and a sieve.

But, at home, Peter Gleave, co-owner of Little Furnace in Liverpool, is less militant: “When we started out, we had a secret sauce – cooked tomatoes, onion, stock and star anise, remove star anise and blend – that people went mad for.” Add in flavours, from roasted peppers to barbecue sauce, or forgo tomatoes altogether. “We had a belter in Naples, squash and fennel seed sauce with fennel salami and smoked mozzarella. Don’t be afraid to experiment.”

The rise of tomato-free white pizzas embodies that attitude. White pizzas were traditionally loaded with mozzarella, cream or béchamel sauces. But, increasingly, lighter (garlic) oil, ricotta or creme fraiche provide the necessary lubrication. “Mushrooms or seafood are better on an oil or garlic butter base,” says Gleave. “Some flavours lose subtlety when tomato is involved.”

“It doesn’t have to be dairy-based,” adds Yung. “Chickpea puree is nice vegan sauce.”

Reject the tomato-and-mozzarella orthodoxy and pizza’s creative parameters open up. Suddenly, this is a topped flatbread. “That’s the thing,” says Richards, considering her crab with samphire and lemon on a marinara base. “When does it stop being pizza and become flatbread?”

Kitchin is untroubled by such semantics. A former Neapolitan-style minimalist, he now takes inspiration from the innovative, eclectic pizza found in New York. “Pizza is just bread. Anything that went with bread previously goes on pizza, even stews, ragu, curry – spicy lamb curry on a pizza is unbelievable.” 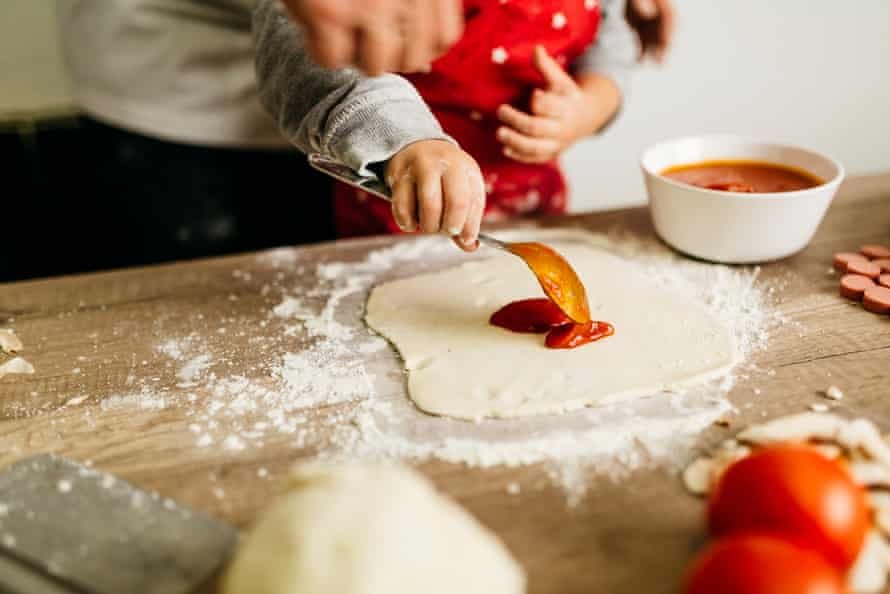 Increasingly, from hot Calabrian ’nduja sausage and honey (“sweet and spicy is an amazing combination. A lot of New York pizzerias use Mike’s Hot Honey, a chilli-infused condiment,” says Yung) to pear and blue cheese pudding pizzas, all bets are off. Or on. Depending how you look at it.

This does not mean pizza perfectionists are throwing ingredients on willy-nilly. There is still broad agreement that three or four toppings is optimal. These should be thinly sliced, in part to ensure they cook thoroughly. Delicate items should be layered under cheese or oiled for protection (undressed kale will easily turn to blackened ash); those you want to crisp up should be placed on top.

Pre-cooking ingredients, particularly those that have a lot of water (peppers, mushrooms, spinach etc) is increasingly common, both to intensify flavours and ensure the base doesn’t become too wet. New Yorkers talk of “good grease”, says Heyes. But again, you want grease spots, not quagmires. Do not add olive oil if using fatty cured meats. “Think about the amount of sauce and how, when they pool and cool, some cheeses do not have a pleasant texture,” says Yung.

Increasingly, there are no verboten toppings. It is all about how you treat that ingredient. For instance, Richards is developing a Korean-influenced chicken pizza. Crucially, the fried chicken is added just before serving to retain its glassy crunch. “We don’t go crazy-crazy, but I think, go for it,” she urges. “I am not a pizza snob.” 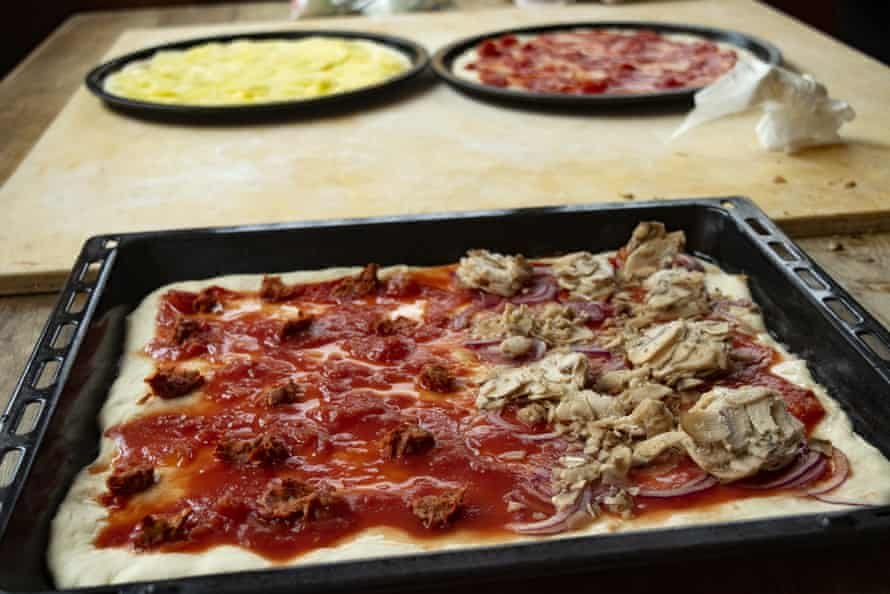 Clams “For something new, try a white base. Steam clams with white wine, garlic and shallots, then reduce the cooking liquid by half and fold it into stiffly whipped cream. 250ml will do two or three pizzas. Spread that on with the cooked, de-shelled clams and bake.” Chris Leach, Manteca, London

Pesto “A versatile base and a great change from tomato sauce. We fortify basil pesto with extra garlic and lemon juice – try some zest, too. As the heat hits, it smells incredible. Pair that with goat’s curd and marinated roast peppers.” George Leigh, Otto Pizza, Lichfield and Birmingham

Smoked mackerel “Using a white, garlic-oil base opens possibilities. Add mozzarella and pre-cooked cocktail beetroots, cook and then flake smoked mackerel and drizzle horseradish cream on top as it comes out of the oven.” Mark Wogan, Homeslice, London

Black garlic vinaigrette “Black garlic is caramel-y, almost sweet, not intensely garlicky. We make tangy cider vinegar vinaigrette out of it, paired with smoked potatoes and miso mayo – so a creamy, potato salad-dressing-type-thing on bread. It’s polarising but some love it. Carbs-on-carbs is popular.” Graham Faragher, Bertha’s Pizza, Bristol

Gochujang “To give a pizza an extra kick of heat and umami, add this Korean condiment to the tomato sauce. For the full experience, add kimchi to a margherita. But lose the basil.” Brett Redman, Elliot’s, London