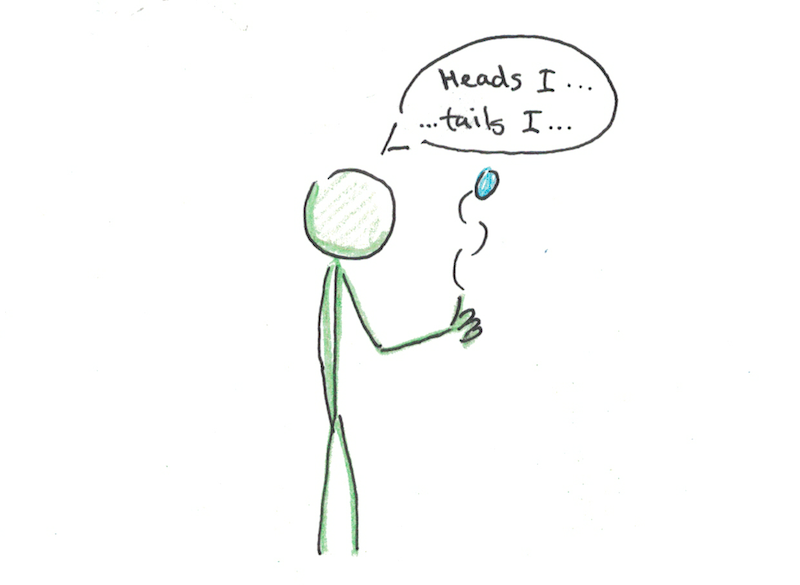 These are all hard decisions. In particular, they’re hard for a few reasons:

How to Tackle These Kinds of Choices

Unfortunately, there’s no perfect algorithm for making these kinds of decisions. If they were, then choosing would be routine, instead of hard.

In these cases, it’s often best to use a few different methods and see which choices they suggest. If you get agreement among different methods, that’s evidence that one side is the better choice (given the information available).

Let’s look at a few of those methods:

1. Find a model. Formalize the decision. 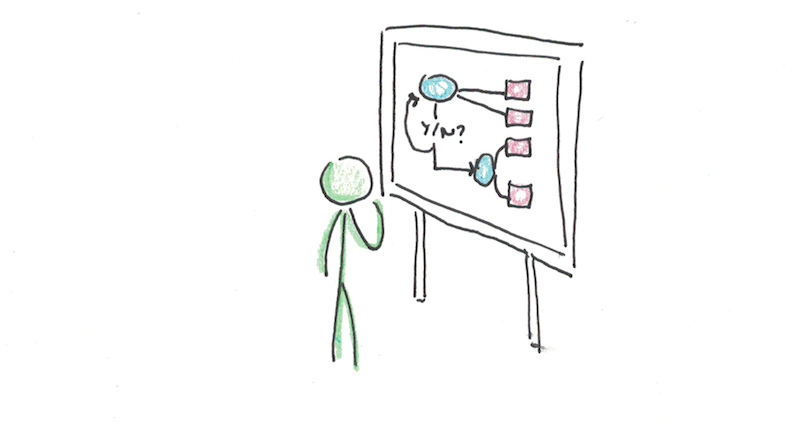 The first method is to explicitly use reason in your decision-making process. This is often valuable when your intuition is conflicted, or there are quantitative matters to consider that your intuition might not be considering.

For instance, let’s say you’re deciding what to major in school. One way of evaluating this choice is by figuring out, what your chances of passing are, what the average career earnings are for each field and adjust it based on your preference between those fields for non-monetary compensation (say from working in a more glamorous career).

This bloodless analysis won’t always yield the correct answer. However, by looking starkly at the numbers, you can get a better sense of whether it’s actually so bad to go into engineering rather than botany.

Your model will leave a lot out. That’s okay. That’s why this is just one decision-making method, not the whole decision-making method. For instance, you may weigh the costs and benefits of having kids right now based on the costs and disadvantages and see if those are ones you can bear. That won’t calculate the love for your future children, but it will make you aware of any sacrifices required.

2. Go with your gut. Then double-check it.

Going with your gut sounds like a lazy decision-making strategy. However, there’s some sophisticated psychology behind making intuitive guesses.

One reason this works is that our intuitions encode our past experiences. Thus we often reason from sophisticated patterns that aren’t consciously visible to us. Intuitions also help us avoid problems of self-conscious signaling, so we may pick the option we really “want” more, even though we can’t rationally justify it.

One way to check it is through what’s informally called a “Freudian Flip.” This technique says to assign each decision to a flip of a coin (or dice, if there’s more than one option). Then flip it. Once the decision has been “made,” ask yourself whether you regret not being able to take another. If you feel relief, that’s the direction your intuition points. If you feel regret, it points in the other way.

3. Simulate the decision. Do your research. 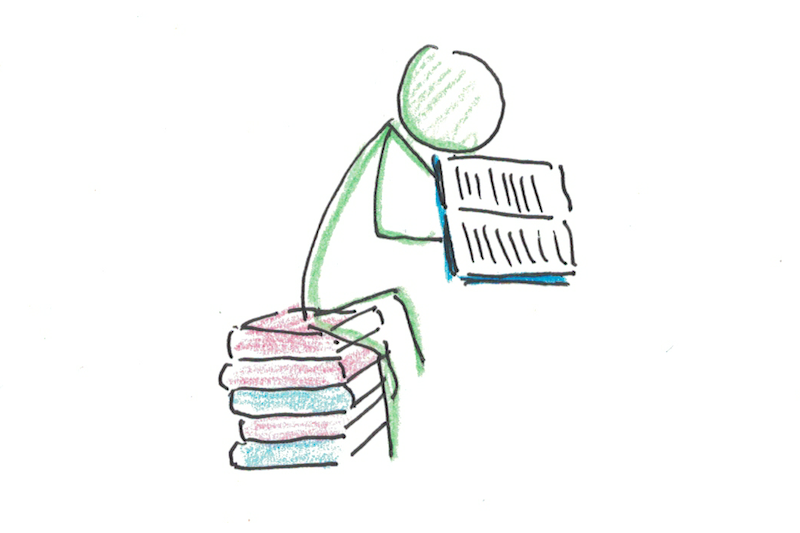 Hard decisions may not admit trial-and-error, but they often allow for research.

Say you’re deciding what career to enter. Have you tried talking to people who work in those fields? Asked them if you can shadow them for a day, to see what the working life is like?

Have you gathered information on salary, benefits and informal assessments of typical working culture and expectations? Have you considered interning in each potential field for a couple months, to get a better feel for each?

Obviously, the cost of increasing research can eventually outweigh the potential difference in choices, but I’m often amazed at how little research and investigation people do for the difficult questions in their lives. It’s only after years of preparation do they realize they don’t actually want the life they have been pursuing.

4. Would the person who made this decision do it again? 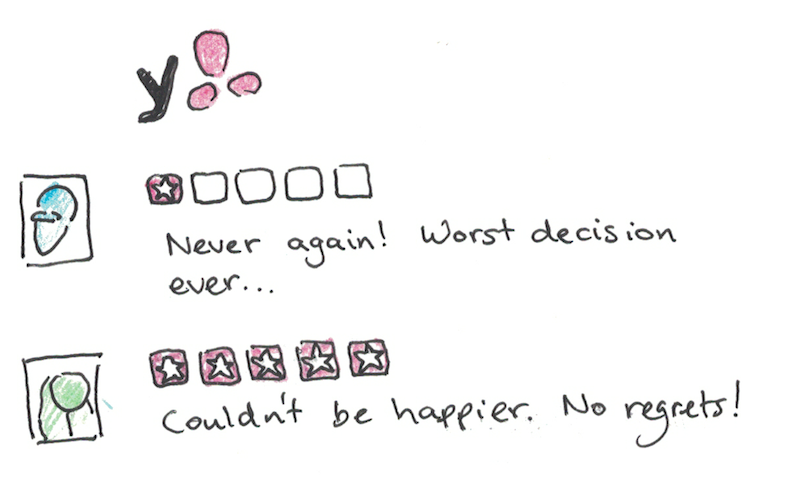 We like to think we’re different. That we have our own preferences, which separates us from other people and makes our choices unique.

The reality is more banal than that. We’re mostly the same. Yes I may like science fiction and you like romantic comedies, but we all like water, breathing, food, sunshine and much, much more. Our commonalities bind us more than our differences make us unique, so we can leverage this to imagine the outcomes of our decisions.

Ask people who made the decision you’re contemplating whether they would do it the same way again? Best of all, ask people on both sides. Most people intuitively justify their past decisions, but you can see differences between, “it turned out okay…” and, “it was easily the best decision of my life!”

When I ask most people if they are happy they had kids or got married, for instance, reports are 80%+ positive. That means, for most situations, these are probably good decisions (at least for the people who were in a position to seriously consider both choices), unless there’s massive bias to be self-deceptive in this direction.

Sometimes decisions are hard, not because one choice isn’t clearly better, but because the hard choice is also the right one. Human beings are short-sighted, so sometimes the easy choice is tempting, even though it’s not the one we wish we will have pursued later.

This procedure asks you to consider both options and ask what your future self will think, five, ten, maybe twenty years down the road. Although this is also a simulation, the advantage is that by zooming out, you naturally avoid the myopia that comes from thinking too much about what would feel nice right now.

Far-mode has its own flaws. Namely, when you zoom out, you ignore the complex reality, and tend to think in terms of idealized decisions. So this zooming out has its own biases. But since this zoomed-out picture aligns with how we feel about our lives generally (and thus, how we evaluate our decisions in retrospect) this kind of protocol avoids making decisions you’ll later regret.

How to Apply These Five Different Methods

Each of these methods will give different answers. My advice is to try out all five. If all five point in one direction, you’ve got a strong signal that one choice is the best.

If four of the five point in one direction, that’s also probably a strong signal, although you may have some reservations.

Formalizing, for instance, works better when the model you make captures most of the things you care about. Might be good for choosing a career, but bad for choosing a spouse.

Intuition works well when the main choices are emotional, but perhaps less well when numbers are involved. Good for choosing where to live. Bad at choosing when to invest.

Ultimately the Decision is Yours to Make

There’s a common view of psychology that states that our rational faculties are mostly rationalizing faculties. This suggests that all this analysis is mostly not to make better decisions, but to better justify the ones you were already going to make.

I’m not sure whether this is completely true, but I do think that, regardless of how you decide, the decision needs to be your own. Owning the choice and the outcomes it generates is the only way to be in control over your life. Surrendering all judgement to society, friends, family or an algorithm, may feel like it absolves you of responsibility, but you still need to live the outcome. Better to own that decision and choose bravely, then shy away and hope the outside world will make it for you.