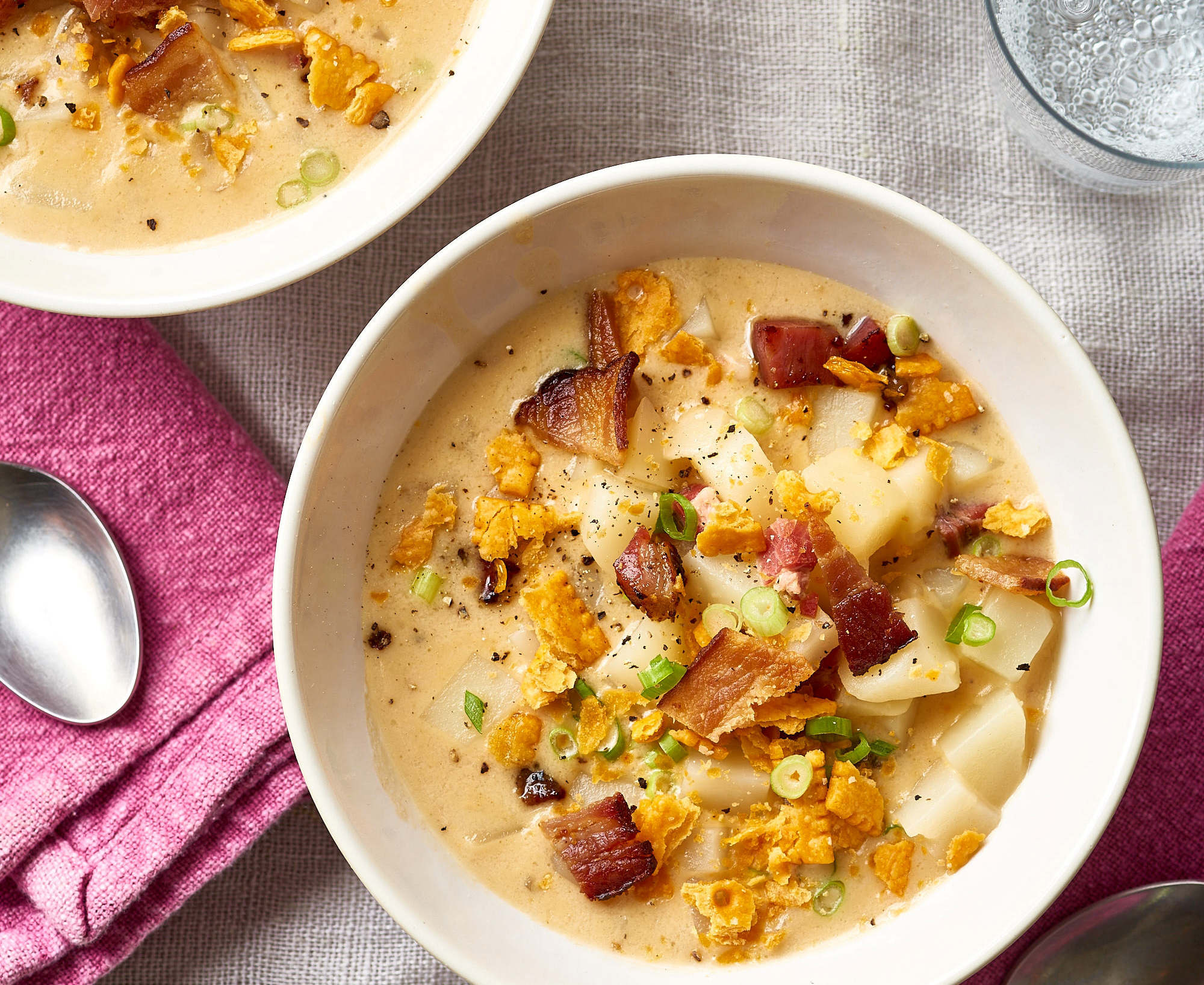 Potato soup is such a fall classic. Tender pieces of creamy russet potatoes mingle with onions, garlic, and salty pancetta for a bowl of soul-soothing solace. The only possible upgrade to this classic is to make it easier with the help from the slow cooker. And let’s be real — this soup is one hundred times better when it’s made in the slow cooker.

To make the absolute easiest potato soup, this recipe relies on pantry staples to create a bowl of creamy, comforting soup that’s as easy to make as it is to love. Here’s how it’s done. 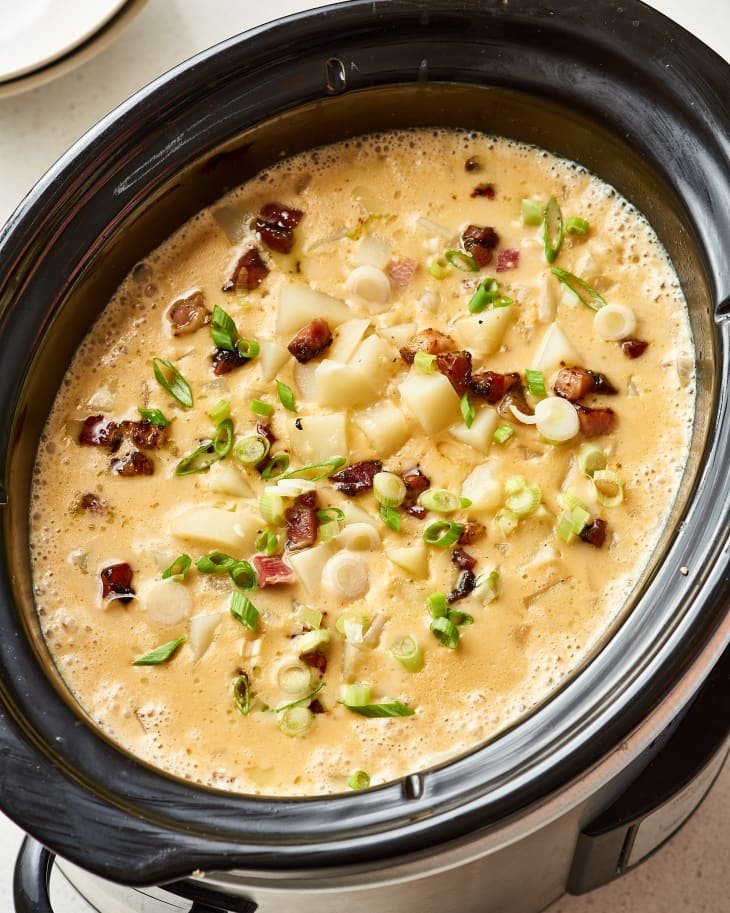 This Cozy Soup Is All About the Potatoes

First, this is not a chowder; there’s no celery or carrot to get in the way of the potatoes. What we have here is a chunky potato soup flavored with onions, garlic, and cubed pancetta and made creamy with a can of evaporated milk (yup, no cream here!). Thanks to the slow cooker, the warm and comforting soup is waiting for you when you come home. 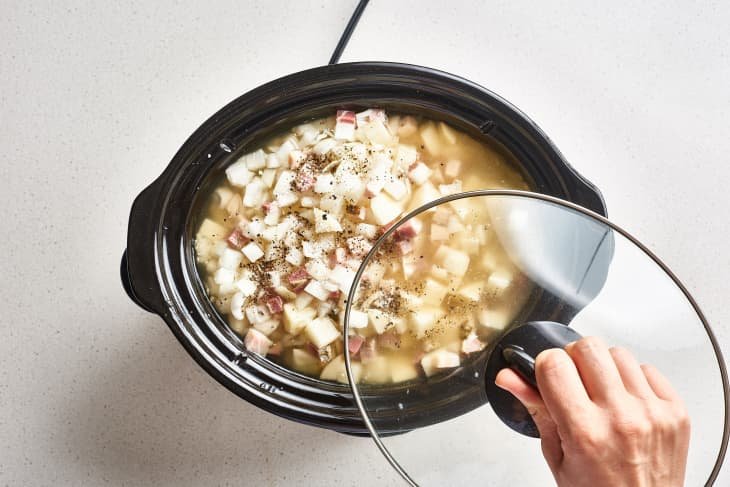 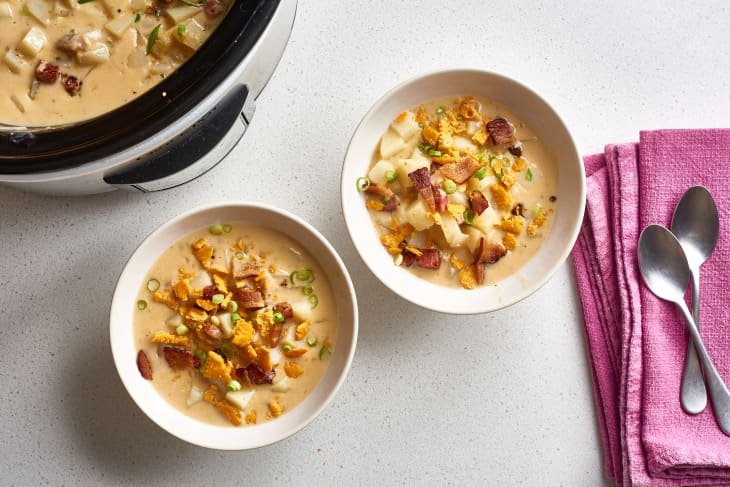 Classic potato soup is often served with a generous flurry of grated cheddar cheese and some crisp bacon, but let me offer a personal suggestion: crumbled cheese crackers. You’ll get the salty, cheesy flavor of the cheddar with the crunch of the bacon. Heck, you could even do all three. Once thickened, the soup will hold well in the slow cooker for about an hour-and-a-half. After that, transfer it to the fridge or freezer for long-term storage.

There’s nothing better than a creamy, potato soup from the slow cooker, which is why we’ve combed through your comments and retested and rewritten this recipe for greater success. Instead of a using a single potato type — russets — we’ve updated the recipe to call for a combination of russets and Yukon gold potatoes. Russets break down in the broth to lend creaminess, while the Yukon potatoes hold their shape for a chunkier texture. We’ve also increased the amount of broth from 1 quart to 2 quarts. Adjusted cooking times also reflect those changes.

Lastly, since many readers had trouble with the milk curdling during cooking, we’ve moved to adding it at the end as part of a thickening slurry.

Storage: Leftovers can be refrigerated in an airtight container for up to 5 days.