Research has found that having clarity about your goals is essential to having motivation to achieve those goals.

If you're not clear on what you're doing, it's hard to be motivated. Which is why seemingly easy tasks, like sending a fax, could end up taking months. There's a lack of clarity on how to do it, so you don't — until either you have to or it's too late.

Unfortunately, having a lack of clarity is why so many people settle for less than their dreams. Said Robert Brault, author of Round Up the Usual Subjects, "We are kept from our goal not by obstacles but by a clear path to a lesser goal."

You want clarity so bad that you're willing to settle for lesser goals, simply because the path to getting your true goal is less obvious. 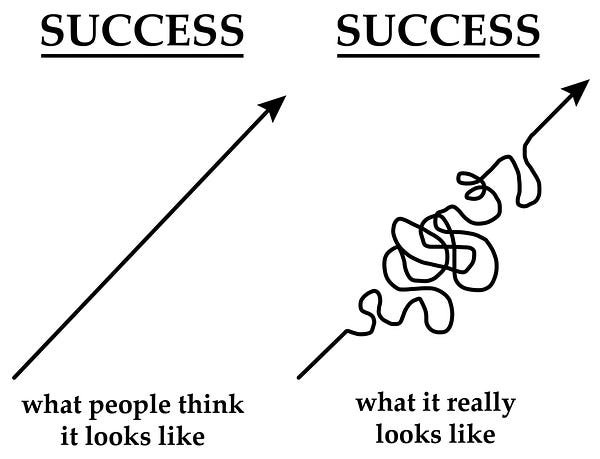 When you're trying to accomplish something big, you have the why but rarely the how. The path to achieving your goals is far from obvious.

You have no clue how you're going to do what you want to do.

According to some scholars, fear of the unknown may be the foundation of all other fears. In order to avoid the unknown, most people bail on their dreams.

"It's a dangerous business, Frodo, going out your door. You step onto the road, and if you don't keep your feet, there's no knowing where you might be swept off to." — J.R.R. Tolkien

When you experience the unknown, what is your emotional experience?

Most people perceive the unknown as threatening, signifying a low tolerance for ambiguity. However, some people are more open to the unknown.

Interestingly, researchers have found that children generally have a higher tolerance for ambiguity than adults. Children are often more willing to accept murky conditions — situations where the likelihood of winning or losing is unknown. As you get older though, your desire for surety and security keep you safely protected in your comfort zone.

Research has found that the more satisfied you are with your work, the higher will be your tolerance for ambiguity. In other words, if you enjoy and believe in what you're doing, you'll take-on the emotional discomfort of the unknown. Said Bill Walsh, former 49ers Head Coach, "If your why is strong enough you will figure out how!"

Get Clarity as Quickly as Possible

It's settled then. If you want to achieve big things, your path will be unclear and hazy. The emotional need for clarity and fear of the unknown leads people to abandon their dreams for more straight forward pursuits.

Having goal clarity is essential to motivation. Consequently, in order to get motivated to achieve your big dreams, you need clarity. However, this does not mean you have "it all" figured it. It means you're clear on the next step or two.

You're on a treasure hunt and you're finding clues and guides along the way. This is the process and emotional experience of pursuing a big dream.

Here's what you need to move forward right now:

If you have these four things, you'll have enough clarity — and thus enough motivation — to move forward. You'll be stretching, growing, and moving while most other people are overwhelmed by the distance between mile marker 1 and 50. While they're staring at the forest from a distance, you're winding your way through the trees. And soon enough, you'll be on the other side.

With this backdrop, here's the most effective way I've found to getting just enough clarity to continuously move forward.

How the Mormon church trains their young missionaries to speak foreign languages so efficiently has garnered lots of attention. When an 18 or 19 year old enters the "Missionary Training Center" (MTC), they enter something of a language learning boot camp. Students at the MTC learn in a few weeks what takes most college students three or four years.

Many universities have applied the MTC's methods to their language learning curricula. The U.S. Military has also studied and teamed with the MTC for decades to better understand how to efficiently train their soldiers. As a result, the Army's Intelligence Brigade, based in Utah, draws on former Mormon missionaries to fill their ranks.

So what are some of the MTC methods?

Primarily, the MTC uses what is called, "Context-based learning." They start by reciting a phrase and working on the pronunciation. Once the student has a basic grasp, they are put into groups of two to role-play real world scenarios. Role-plays make up approximately 70 percent of learning at the MTC — learning while doing — with a teacher standing by to individually coach when needed.

The system is simple:

In our digital world, simulation training — based on role-playing real world scenarios — is becoming increasing popular.

Additionally, research has found that getting consistent feedback is essential to effective learning.

How to Apply Context-Based Learning

"If you want lasting change, you've got to give up this idea of 'trying something.' You've got to decide you're going to commit-to-mastery. Most people dabble. They say, 'I'd like to change my body,' or 'I'd like to make my relationship better.' These people don't have enough detail to follow-through." — Tony Robbins

If you want to learn something quickly, you need to immerse yourself in that thing and immediately implement what you're learning.

The fastest way to learn Spanish, for instance, is by immersing yourself in a Spanish culture. Flash-cards for 15 minutes a day will eventually get you there. But you'll make deeper connections with a few days fully immersed than you would in months of "dabbling."

You need enough clarity to have high motivation to move forward. The more clarity you have of the path set before you, the higher will be your motivation to go down that path. Thus, rather than trying to motivate yourself, your goal should be to clarify the next few steps ahead of you.

When you move beyond dabbling to full commitment, you'll want to learn quickly. So, you'll need a teacher. Someone who can help you take the next few steps.

This teacher can be in the form of a book or an online course. Or, it can be an actual person. The benefit of a real person is getting immediate and relevant feedback and direct answers to your questions.

Recently, I hired someone to help me learn software for my online business. I wanted an immersion-type experience. Turns out, he lives seven hours away from me. So I drove down to his house and spent two days straight with him. I slept on his couch in my jeans and t-shirt.

In these two days, I learned more than I could've learned in six months on my own. My teacher could quickly assess where I was. I was able to ask him questions. On an easel board, he would explain to me the software and how it worked.

After explaining the concepts and answering my questions, he would have me immediately apply my learning. This exposed the true gaps in my understanding. Being able to apply something, after all, is the difference between knowing something and understanding it. Hence, Napoleon Hill has said, "Knowledge is only potential power. It becomes power only when, and if, it is organized into definite plans of action."

2. Repetition Until Your Learning Becomes Unconscious

While implementing what I learned, my teacher would watch me from a distance. He let me struggle as I tried to remember what he had just shown me.

The first time applying what he taught took a lot of time and effort. So we did it again, and again, and again. Overtime, I become competent and thus also and confident.

Learning something new is all about memory and how you use it. At first, your prefrontal cortex — which stores your working (or short-term) memory — is really busy figuring out how the task is done.

But once you're proficient, the prefrontal cortex gets a break. In fact, it's freed up by as much as 90 percent. Once this happens, you can perform that skill automatically, leaving your conscious mind to focus on other things.

This level of performance is called "automaticity," and reaching it depends on what psychologists call "over-learning" or "over-training."

The process of getting a skill to automaticity involves 4 steps, or stages:

1. Repeated learning of a small set of information. If you're playing basketball, for instance, that might mean shooting the same shot over and over. The key here is to go beyond the initial point of mastery.

2. Make your training progressively more difficult. You want to make the task harder and harder until it's too hard. Then you bring the difficulty back down slightly, in order to stay near the upper limit of your current ability.

3. Add time constraints. For example, some math teachers ask students to work on difficult problems with increasingly shortened timelines. Adding the component of time challenges you in two ways. First, it forces you to work quickly, and second, it saps a portion of your working memory by forcing it to remain conscious of the ticking clock.

4. Practice with increasing memory load — that is, trying to do a mental task with other things on your mind. Put simply, it's purposefully adding distractions to your training regimen.

Essentially, you want your understanding of something to be fluid and flexible. You want to be able to apply your learning in different contexts and for different purposes. Thus, you learn your skill in-and-out.

"Inevitability Thinking is thinking and acting as if what you are doing is a forgone conclusion because you set up the conditions for it to happen." — Eban Pagan

Once the "training" is complete, you need to take it into the real world. You do this by setting huge goals requiring you to use the knowledge you've just acquired.

Just before leaving my teacher's house, we set goals together. Although the goals seemed overwhelmingly big, I felt confident I could achieve them because I now had clarity.

The time-line to achieve my goals was three months. At the end of those three months, I'd be back at his house for more training. We were on each other's Google calendars and I paid him in advance for our next immersion learning experience.

Having these three are essential for rapid progression and learning.

If you're not tracking your daily behaviors, you are undoubtedly doing worse than you think you are. For example, most people have no clue where there money goes, because they don't track their expenses.

According to research, self-regulation is the psychological process that detects inconsistency between your goals and your behaviors. It is the ignition of your motivational forces helping you get from where you are to where you want to be.

Beyond tracking, research has found that accountability improves performance. When you report your performance to someone, particularly someone you respect, it adds external and relational motivation to succeed.

During your accountability sessions, you can get coaching and feedback on where you can improve.

Striving to accomplish big goals is not easy. Most people will give-up on their dreams in order to have a clear path to lesser goals.

If you want to move quickly toward your big goals, you'll need to become proficient at acquiring clarity for the next few steps of your journey. The best way to do this is through context-based and immersion-style learning.

The deeper and wider your clarity, the bigger your goals can be. In order to ensure you achieve those goals, you'll need to daily track your behaviors and have an intense accountability system in place.

It's all in the set-up. When you set up the conditions effectively, you make the achievement of your goals inevitable.