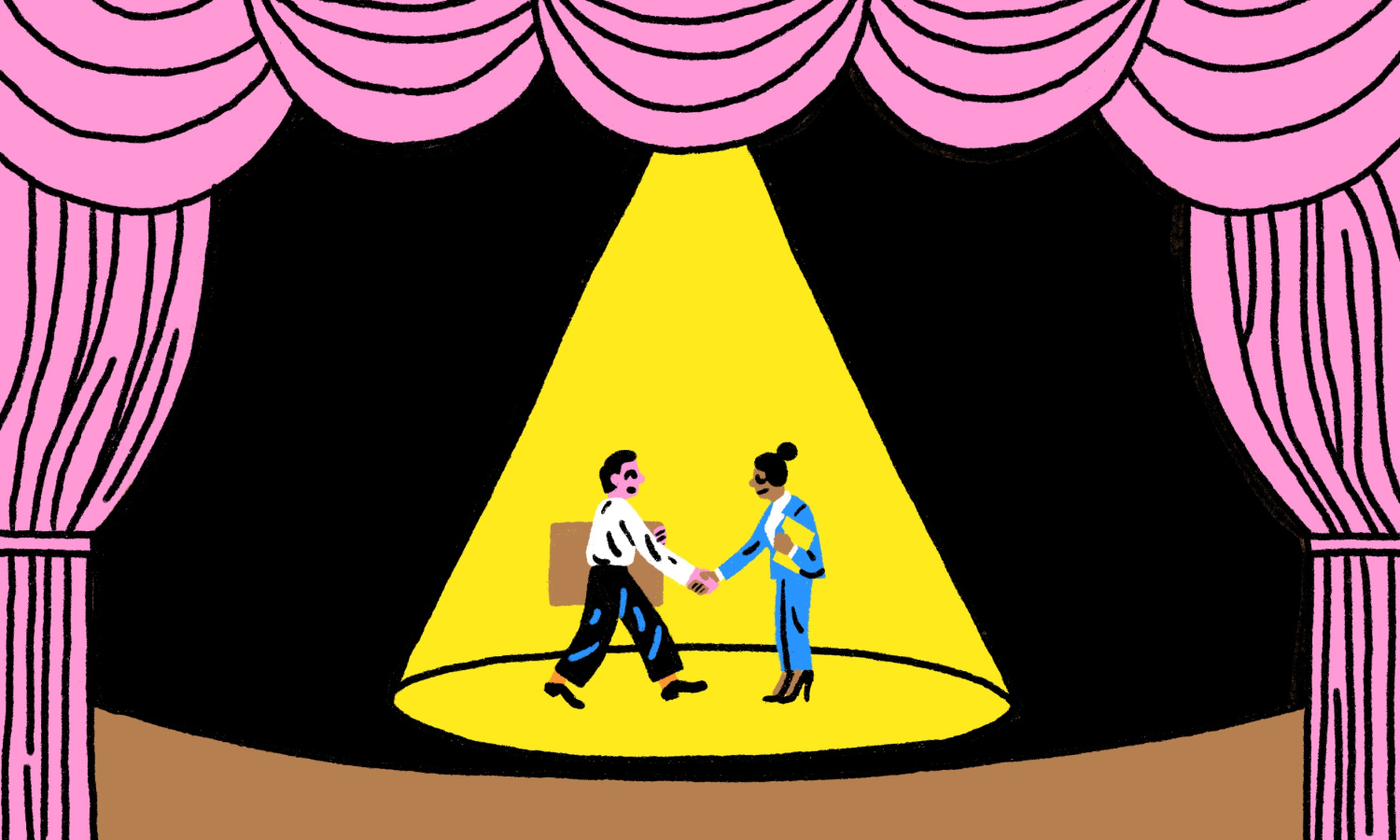 When was the last time you performed? Was it in a college play? A middle school talent show? Karaoke with your coworkers? Or was it the time you met with your supervisor to negotiate a salary increase?

While that last question may not seem to belong with the others, it does to Michael and Amy Port, two trained actors turned speaking coaches. Most of us need to perform all the time, even if we don’t see ourselves as performers, they say in a TEDxCambridge talk. “In our personal and professional lives, we’re called upon to make toasts, give eulogies, nail a job interview, or win a negotiation, and they’re all high-stakes situations,” says Michael.

Please note: Using acting techniques isn’t the same thing as manipulating people, or being phony or fake . Instead, it’s about communicating in a way that moves others to see your point of view and, at times, act in your favor. When you go to the theater, the most convincing Juliet is able to make the audience understand — or, better yet, feel — why she simply has to marry Romeo despite all the obstacles.

Essentially, this comes down to being intentional — with yourself and with others — about what you’re trying to achieve. Whether you’re attempting to persuade a landlord of the urgent need to replace your stove or connecting with another parent at your child’s school to set up a play date, “all day long, we try to affect people and … we make people feel things,” says Amy. “The difference is if we’re trying to get what we want and we don’t consciously choose our objectives, we’re still making people feel things — we’re just doing it unconsciously or even thoughtlessly.”

An actor always performs with a clear purpose or motivation in mind. When you’re thinking about your next high-stakes situation, ask yourself the same question that actors ask when developing a character: “What’s my end goal?”

What this means: Think about your long-term objective, not just the immediate one. For example, when Michael met Amy’s parents for the first time, he went beyond thinking how he could impress them in that meeting and focused on how he wanted to achieve a harmonious, integrated family in the long run. This helped him make choices that were in line with his larger purpose.

2. Think About How You Want the Other Person to Feel

The choices made by an actor during a performance — in speech and movement — are in the service of attaining their goal and achieving a specific impact on their audience. Actors call this “playing an action.” Take, for example, a job interview. If you want the employer to feel that you’re someone who is open and collaborative, your action could be be speaking about how excited you are to working with members of your prospective team and bringing up specific names. Or, if you want them to feel that you’re someone who can work independently and won’t require any hand-holding, you might tell them about the courses you’ve taken in project management and the systems you’ve set up at previous jobs to get things done efficiently.

Of course, “not everything you say or do is going to work,” says Michael. “People don’t always respond exactly the way you want them to but if you can fluidly play one action after another in pursuit of your objective, it gives you this ability to improvise in the moment and be flexible.”

“Being comfortable with discomfort is a principal characteristic of being a performer,” says Michael. One of the primary kinds of discomfort that we experience — whether you’re a professional actor or someone whose last role was Camel No. 2 in the kindergarten pageant — is fear of other people’s negative reactions, in the form of rejection, ridicule or criticism.

As a result, many of us stick to playing it safe, but that’s “the killer of any great performance,” says Michael. After all, it’s hard to win people over to your perspective if you’re busy trying to calm the alarm bells going off in your head.

While there’s no magic trick for dissolving fear, you can manage it. First, know that “fear is completely human. It’s normal,” says Amy. So, when you feel your palms sweat and your stomach churn as you’re about to, say, walk into a job interview or presentation, this just means that you’re alive.

Then, before you go into a situation that matters, take some time to identify your greatest fear or fears. Be as specific as possible. Instead of simply thinking “I’m really scared,” name exactly what it is. Maybe you’re scared of being disliked, of people hearing your voice shake, of letting other people down — you name it. This practice of pinpointing your precise emotional state is what psychologists call emotional granularity, and people who exhibit greater emotional granularity have been shown to be more able at regulating how they’re feeling and responding appropriately.

Then, go for it. Bargain down the price of a new car, pitch that new client, or address a community board meeting. Often, “to be high-level performers both on and off the stage, we need to take great risks and not worry that we’ll be criticized for doing so,” says Amy.

Using these acting techniques will (probably) not turn you into Meryl Streep or Michael B. Jordan. But they can help you speak and act with care and take greater control of your interactions, rather than letting stressful situations toss you around like a salad. “When you see yourself as an everyday performer, you are the one who creates your reality,” says Amy.

Daniella Balarezo is a Media Fellow at TEDx. She is also a writer and comedian based in NYC.