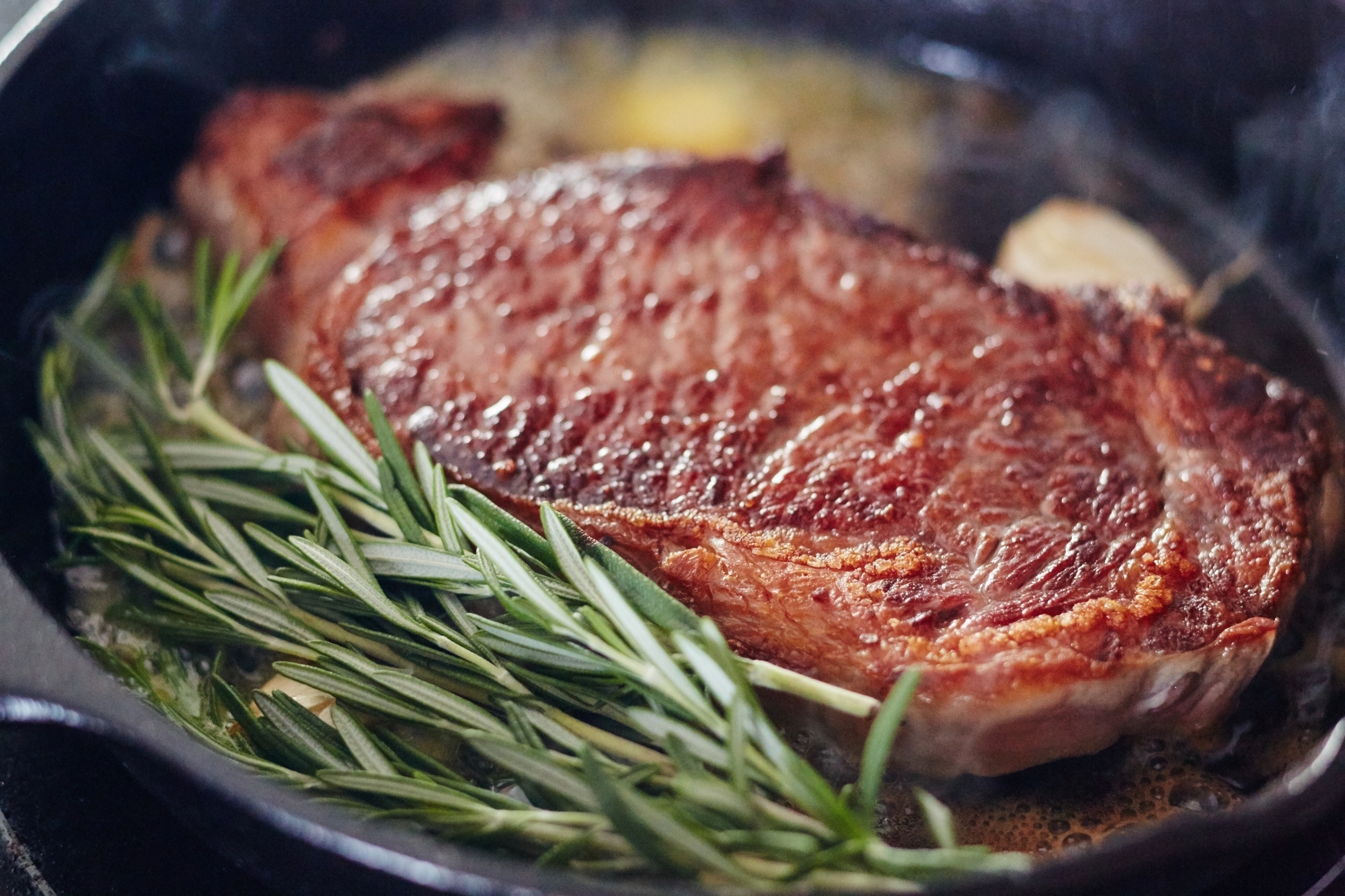 What if I told you the very best stovetop steak of your life can be enjoyed in as little as 45 minutes, with only four extra ingredients and 15 minutes of hands-on cooking? It’s true! Busting conventional steak-cooking wisdom makes for better steak.

When you really want a straight-forward, no-fuss steak with a crisp crust and juicy center, I can say without question that the most fail-proof way to cook it on the stovetop only requires three steps. Partnered with a few essential tips, this simple three-step method will give you a perfectly cooked stovetop steak with a tender buttery flavor, cooked just the way you like it, every time.

Cooking a very good steak on the stovetop goes like this: Buy the best steak for pan-searing (boneless NY strip or rib-eye), season it very well with kosher salt for just 30 minutes before you plan to cook it, and finally cook it hot and fast with no oil to start and some butter to finish. What about the steak resting step? Well, it turns out resting might not be as important as we all once thought. More on that juicy tidbit below.

1. Buy the best steak for pan-searing.

The best steaks for cooking on the stovetop are boneless steaks that are between one and one-and-a-half inches thick. Thicker cuts like a New York strip steak or a boneless rib-eye work best for this method. Look for a steak with plentiful marbling (the white fat that runs throughout the meat) and don’t be afraid to ask your butcher to cut a thicker steak if needed. When a steak has enough fat, it tends to remain juicy during the cooking process and has the meaty flavor and texture you want from a steak.

Buy the best steak you can afford. It will cost you more than stew meat or burgers, but cooking steak at home — even with a decent bottle of wine, appetizers, and sides — will still cost less than the cheapest steakhouse steak.

Do Other Cuts Work?

This method of pan-searing a steak would work with steaks that fall under one inch (flank, flat-iron) although the overall process of cooking these cuts happens much faster. Be ready with your digital thermometer after the two-minute mark to begin testing for doneness.

Bone-in steaks are more difficult to properly pan-cook and can lead to uneven cooking. They’re better suited for cooking in the oven or on the grill.

Personally, I never have the forethought to season my steaks the night before; I’m usually picking up a steak to cook that evening when the craving strikes.

Steer clear of ground pepper, steak seasoning, or other rubs for these pan-seared steaks. The extremely hot pan will burn these spices before they can flavor the steak. 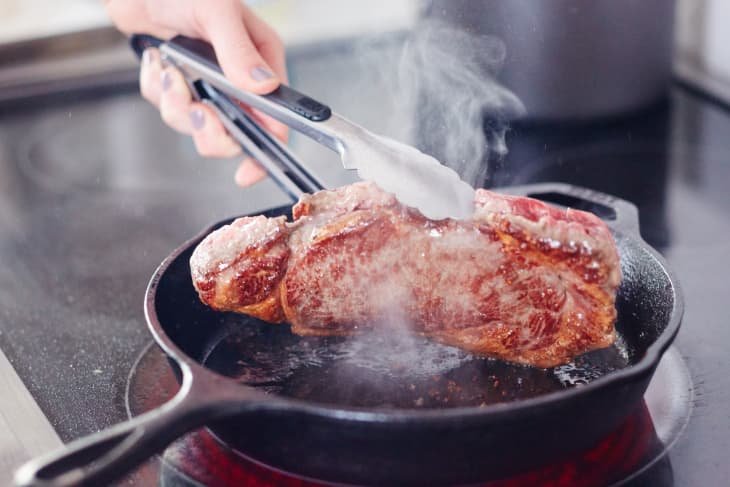 Here’s where I’m going to ask you to trust me. Put your heaviest pan, preferably cast iron, over high heat and let it get so hot it smokes a little before adding the steaks to the pan. The hot, hot heat is essential to a creating a nice crust on your steak. Searing isn’t about keeping moisture in (research has proven that to be a false theory) — it’s about creating a crisp crust on the outside that adds a ton of flavor to the finished steak.

Keep the steaks moving, turning or flipping every minute or so to create a thin, even crust on the outside. About halfway through cooking, add a few tablespoons of butter, herbs, and aromatics to make a hot baste for finishing the steak. Use a large spoon to bathe the steaks in the hot butter and continue flipping until the steaks reach your desired doneness.

You’ll notice this recipe doesn’t call for any oil on the steaks or in the pan to prevent sticking. Oil can inhibit browning, which slows searing. As long as you’re using a very hot cast iron pan, sticking shouldn’t be a problem.

The best and easiest way to determine the doneness of steak is with a probe thermometer. There are so many factors at play — the steak, the pan, the oven — and the only way to ensure you’ll end up with the doneness you want is by taking the temperature.

Begin to check the steak’s temperature with a probe thermometer about halfway through cooking, at about four minutes, as a guide for how much longer to cook it.

Don’t worry — the butter-basting step helps ensure that even the most well-cooked steak is moist and flavorful.

I once believed that even a short rest between cooking my steak and cutting it made a world of difference in the quest for a juicy steak. And I know I’m not alone — this is cooking wisdom that gets passed along unchecked pretty easily. But Kitchn’s Food Editor, Hali, sent me a link to an article that argued (pretty convincingly) that resting steaks wasn’t nearly as important as serving a hot steak. Reading this theory from Meathead over at Amazing Ribs countered everything I thought I knew about steak. After our convo, I ran a side-by-side test in hopes of proving the theory wrong.

A steak is a relatively small piece of meat compared to a brisket or roast, so it heats and cools quickly, allowing only for a few degrees of carryover cooking, if any. In between the resting, slicing, and moving to the plate and table, most home steaks get pretty cool before we actually eat them. The pleasure of eating a hot steak is manyfold: the crust is still incredibly crisp, the butter from cooking is still warm and dripping, and the juices pool on the plate into a playground for dipping.

In a side-by-side taste test of a rested steak and a steak that was cut just moments out of the pan, I barely noticed a difference in the tenderness and juiciness in the hot steak. It was just more pleasurable to eat! Side by side, I’d pick the hot steak every time.

If you need a few minutes to make a pan sauce or to sauté some spinach in the still-hot pan, go ahead and let your steak rest. If you followed the other three hallmarks of this recipe — buy a great steak, season it well, and cook it hot and fast — then you already did all the important stuff to make a perfect steak. Now you’ll have a perfect steak with really good pan sauce!

How To Cook Steak on the Stovetop

Storage: Leftovers can be stored in an airtight container in the refrigerator for up to 4 days.