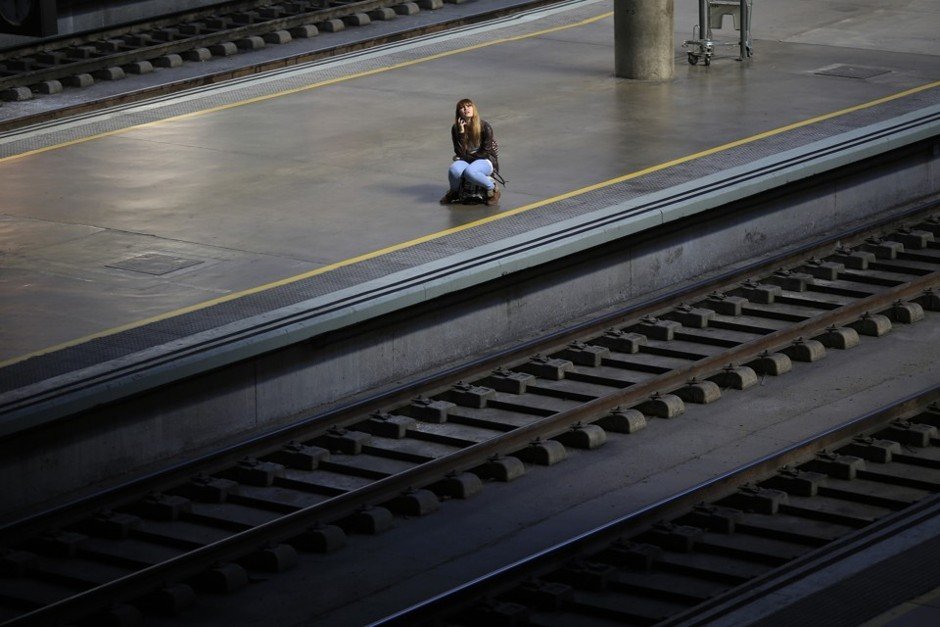 “I’m clearly a textbook case of the silent majority of middle-aged men who won’t admit they’re starved for friendship, even if all signs point to the contrary,” wrote Billy Baker in his exploration of male loneliness in TheBoston Globe.

Perhaps one reason the piece made so many internet rounds is just how many people could relate: In 2016, Surgeon General Vivek Murthy warned that Americans are “facing an epidemic of loneliness and social isolation.”

Though “I’m going to die alone” is the common grumble among single people, scientifically, it’s more like, “I’m going to die if I’m alone.” A lack of social connections can spark inflammation and changes in the immune system, so lonely people are far more likely to die prematurely.  Loneliness is more dangerous than obesity, and it’s about as deadly as smoking.  The threat is considered so serious that England has created an entire “ Campaign to End Loneliness.”

But in a cruel twist, the loneliest among us are set up to get lonelier still. People with few social connections experience brain changes that cause them to be more likely to view human faces as threatening, making it harder for them to bond with others.

To learn more about this conundrum, and how to resolve it, I recently spoke with John Cacioppo, a psychologist at the University of Chicago who wrote a book on loneliness and has researched the phenomenon extensively. An edited transcript of our conversation follows.

Are people getting lonelier, and if so, why?

When you look across studies, you get levels anywhere from 25 to 48 percent [of people reporting being lonely]. I’ve seen some out of London that suggest 50 percent of Londoners feel lonely, but that’s not a longitudinal sample, so take that with a grain of salt.

The longest subsample is the Health and Retirement Study in the United States. That’s a study the federal government has been running for decades now, and those are the data I base our own estimates on. When we look at that survey, it looks like loneliness is around is around 27, 28 percent. Our best estimates based on that means it’s increased anywhere on the order of 3 to 7 percent over the last 20 years.

That’s not huge, but is there an explanation for that uptick? Is that just that people are getting older, and older people tend to live alone?

First of all, let me qualify something. Living alone, being alone, and the size of your social network is only weakly related. Think about patients in hospitals: They aren’t alone, they have all the support they could ask for, but they tend to feel very lonely. There’s a difference between being alone and feeling alone. People in marriages tend to feel less lonely than people not in marriages. However people in marriages can feel extraordinarily alone when they feel alienated from their spouse and family. They’re so weakly correlated, we need to take objective isolation and perceived isolation and separate those two.

In animals, it’s not separating a monkey from any companion, it’s separating them from a preferred companion. When we do that, we see the same effects in those monkeys that we see in humans; they feel lonely.

So why the slight uptick in loneliness?

We know that there’s a number of cultural factors and environmental factors. For instance, the internet has increased connectivity. But if you ever find yourself [looking at] your texts and emails at an event with your family, you may realize that those digital connections don’t mean that you feel more connected.

If you use those [digital] connections as a way station—kids tend to do this; they use Facebook so that they can then meet up somewhere—it’s associated with lower levels of loneliness. If it’s used as a destination—and ironically, lonely people tend to do this, they tend to withdraw socially because it’s punishing, and interacting digitally perhaps as a non-authentic self, makes them feel more like they’re accepted. But it doesn’t actually make them feel less lonely.

If the only acceptance you can get of yourself is a fake representation on the web, that’s not going to make you feel connected. But if you look at online dating, there you’re using it to meet other people, so not surprisingly, that tends to be associated with lower levels of loneliness.

Why do people who are lonely interpret social situations more negatively?

There’s two ways to think about it. One is what’s going on pre-attentively, and one that's going on consciously. [For example,] when you get hungry, you can feel it, you want to have some food. Its purpose is to motivate you to seek food before you are so low on fuel that you can no longer have the energy [to do so].

And loneliness motivates you to repair or replace connections that you feel are threatened or lost. So people pay more attention to social information because they’re motivated to reconnect.

So in hunger, you are [much] more sensitive to bitter than to sweet tastes. The reason for that development is that bitter tastes, evolutionarily speaking, were associated with poisons. What that means is if you’re really hungry, you’re going to spit out palatable, bitter food even though you’re trying to find something to keep you alive.

Same thing with loneliness. If you look at early humans and other hominids, they were not uniformly positive toward each other. We exploit each other, we punish each other, we threaten each other, we coerce. And so it isn't that I want to connect with anyone, I need to worry about friend or foe. Just like bitter versus sweet, poison vs. non poison, if I make an error and detect a person as a foe who turns out to be a friend, that's okay, I don’t make the friend as fast, but I survive.

But if I mistakenly detect someone as a friend when they're a foe, that can cost me my life. Over evolution, we’ve been shaped to have this bias.

That sets up an expectation, because what I expect is often what I see. If I think you're going to be hostile, I'm going to answer questions very differently than if I trust you.

You’re motivated to connect. But promiscuous connection with others can lead to death. A neural mechanism kicks in to make you a little skeptical or dubious about connecting.

Some studies have found that creating more opportunities for social interaction, or even improving social skills, doesn’t really help reduce loneliness. Why not?

Social interaction is sometimes called social engagement, basically the idea there is that loneliness can be cured by putting people together. As in, if they're not alone, they wont feel lonely. Colleges think this, which is why they have mixers. You remember mixers in college? They don't work.

A new mother with a newborn she loves—loves playing with the baby—that does not mean the husband shouldn’t give her a break, let her go off and regenerate, have some time to herself, so that she can return and continue to be absolutely generous and loving and adoring. That time alone enhances social connections, it doesn’t contract it.

What is social support, then?

There are programs like this for highly lonely elderly people. They provide social support, they bring them food, they might meet with them for once a month. Doing that is actually helping these people. Their biggest fear is they're going to die and no one will ever know it. And that their body will sit and rot, which is a pretty horrific thought. And the fact that they're visited once a month provides solace to them.

That’s a different issue than making them feel less lonely. They are getting social support, it is addressing a serious problem, but it's not going to do very much for their level of loneliness. It just solves the existential fear of no one ever knowing not only that they were ever on earth, but that they even perished.

How would you do therapy to try to help people who think they’re lonely but are nonetheless wary of connecting with people?

So how do you verify? You’re open but you’re watchful, you're vigilant. You test hypotheses. So if you're at that party, you might talk to others and you give them a chance.

The other thing we’ve shown is that loneliness, interestingly, is related to an increase in egocentrism. Self-preservation depends more on your attention to your outcomes when you’re lonely than when you have lots of connections. [Sometimes] if you talk to a lonely person, they'll start talking to you and you can't get away. So, how do you share rather than just barrage? It’s about interactions, it’s about synergy, it's about mutuality.

What advice do you have for people who feel lonely? Are there any practical steps they can take?

One of the biggest misunderstandings is what loneliness is. They equate it with being alone, and that leads to attempts to solve the problem that don’t solve the problem at all. And if you try enough times, you start to feel like, “Well, I’ll never be able to solve this, I’m just a worthless person.” And that's when you start getting social withdrawal.

One notion that people intuitively have is it's just about being with other people, and we've already talked about how that’s wrong. The other thing is that it’s just about social support—“I need more support.” And that doesn’t work very well because the logic of that is it's not mutual. Just getting support doesn't actually make you feel very good. This is one of the reasons why when we do something for others, we tend to feel good. If you go cook at a soup kitchen, all of a sudden you start finding out that people can actually be pretty nice, they're responding with gratitude.

The third common thing is that it’s social skills, that people with poor social skills are the ones who are lonely. Well, guess what? That's not the case. If you have really bad social skills, you’re more likely to be lonely, that's true. But lots of people feel lonely who have great social skills. Millionaires, billionaires, tend to feel lonely. A lot of athletes often feel lonely. Lots of people want to be their friend, but how would you feel if all the people who want to be your friend, you had the alternative interpretation that they want material or social benefits that you could give them.

This is why you see some [famous] athletes from [poor] neighborhoods not severing those ties, even though it's clearly to their benefit if they were to do so. Those are the only relationships they know are real, are authentic.

Is there something lonely people should be doing proactively, like going to a book club or soup kitchen?

Do volunteer service in something that you enjoy. I've developed the acronym EASE—ease your way back into social connections. The first E stands for “extend yourself,” but extend yourself safely. Do a little bit at a time.

The A is “have an action plan.” Recognize that it’s hard for you. Most people don’t need to like you, and most people won't. So deal with that, it's not a judgment of you, there's lots of things going on. Ask [other people] about themselves, get them talking about their interests.

The S is “seek collectives.” People like similar others, people who have similar interests, activities, values. That makes it easier to find a synergy.

And finally when you do those things, “Expect” the best. The reason for that is to try to counteract this hyper-vigilance for social threat.