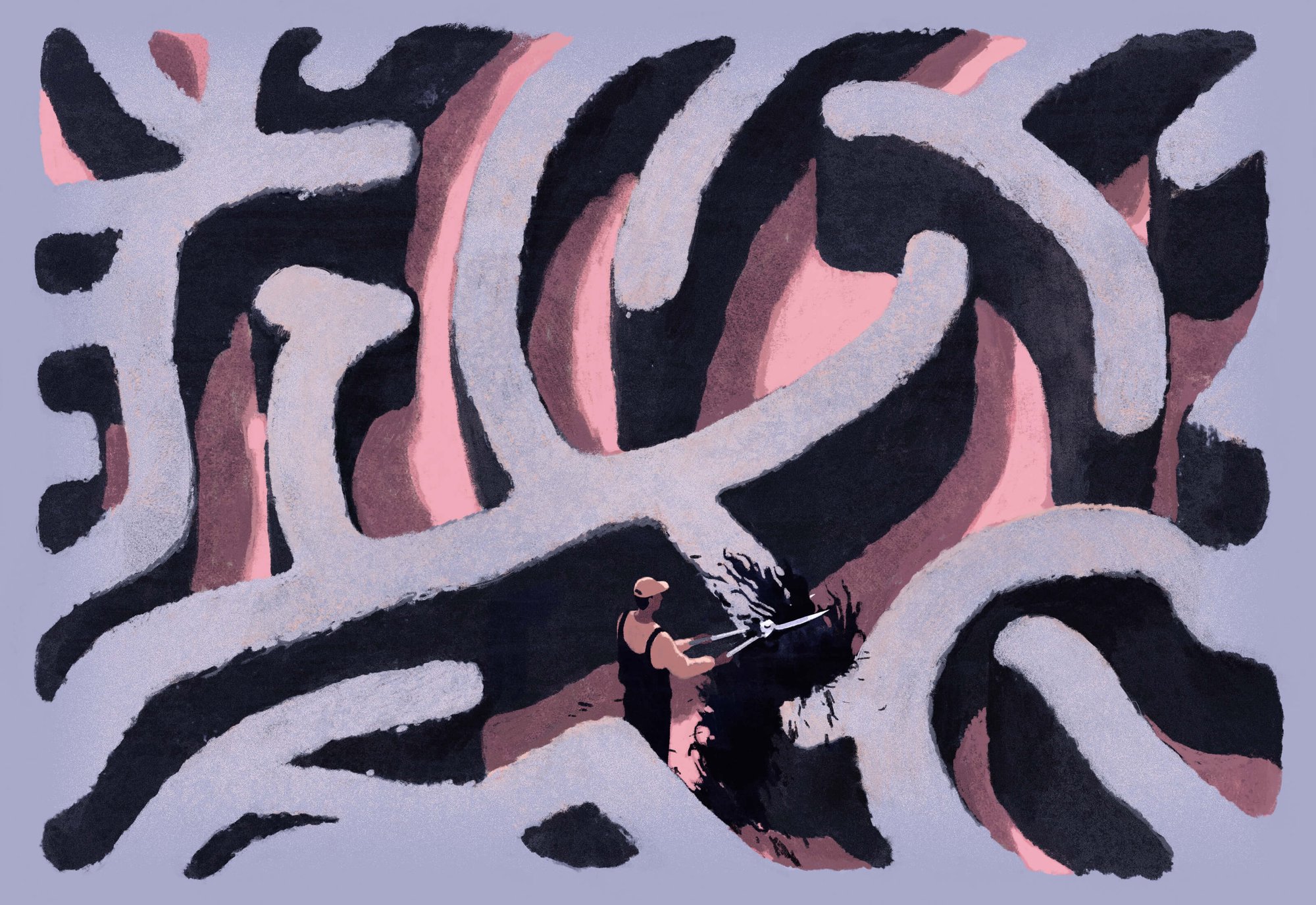 For most, the brain constantly adapts and even thrives under new conditions. Photo by Hokyoung Kim for Quartz

The brain is a well-designed machine. If it’s working well—like when it’s reading the words on this page—we don’t notice it at all. At night when we sleep, the brain takes our consciousness offline so it can start its real work: sorting through the day’s information, storing the important parts, and cleaning out the gunk that accumulated.

The brain is so well-designed, in fact, that we hardly even notice when it’s breaking down.

Like the rest of our organs, the brain undergoes its own aging process. And yet the majority of adults don’t experience major cognitive decline—the kind that severely limits their ability to live independently—over time.

That’s because the brain is one of the most resilient organs in the body. Yes, dementia affects about 5.6% of the world’s population, a share that includes the devastating burden of Alzheimer’s disease. But in normal aging, even as parts of the brain shrink and neurons lose connection with each other, those changes only have a minor effect on our daily lives. It may be frustrating to forget where you put your keys, but you can still learn that you’re prone to forgetting them, and pick up the habit of writing notes for yourself.

For adults who remain neurologically healthy into their later years, the brain constantly adapts and even thrives under new conditions. But how it pulls it off is a mystery scientists are still trying to solve. The hope is that if researchers can understand how healthy brains stay resilient, they can identify what’s happening when these systems fail—often, leading to dementia.

The brain’s incredible resilience comes, at least in part, from its plasticity. The rest of the body’s organs carry out roughly the same job from the moment we’re born—albeit on a larger scale as we grow. The heart pumps blood, the liver and kidneys filter, and the stomach churns food.

Babies’ brains are equipped with billions of neurons, but they have to be warmed up and molded to be useful. Over as many as 25 years, neurons form hundreds of thousands of connections as we learn and make memories. Some of these connections are cropped as they’re not needed; others grow stronger as we learn to reason in the abstract, mitigate impulsive and risky behavior, and plan ahead for the future.

Shortly after the brain finishes fully forming, though, it starts to wear down.

“Aging is a lifelong biological process,” says Kristin Kennedy, a neuroscientist at the University of Texas at Dallas who studies healthy cognitive aging. There’s some disagreement about exactly when the brain starts to show signs of wear and tear. Some of the limited research available suggests it happens around middle age, some suggests our 30s, and some even in our 20s. But the consensus is that some shrinkage is inevitable and normal. Specifically, the prefrontal cortex and medial lobes—areas involved with high-level functions like planning, emotional processing, learning, and memory—get a little smaller, says Elizabeth Zelinski, a neuroscientist and gerontologist at the University of Southern California.

Research hasn’t shown that brain shrinkage causes those mild memory changes, though. And on the whole, the physical changes in the brain barely affect our daily lives. Take, for example, the results of the Long Beach Longitudinal Study, which Zelinski started in 1978 to track the cognitive health of hundreds of healthy adults. One of its findings was that people forget roughly one tenth of a word per year. In other words, Zelinski says, if you could remember a series of 17 words in one year, it’d take a full decade for you to only be able to recall 16—a decline most people wouldn’t even notice. The brain’s plasticity, on average, keeps our memories delightfully intact.

Only about 5% to 8% of adults go on to develop dementia, which is characterized as severe cognitive decline that inhibits everyday function. Scientists still aren’t sure what goes wrong in these cases, and why these individuals’ brains are vulnerable in ways that normal, healthy brains are not.

Resistant or Resilient? The Great Debate

Advances in neuroimaging have both helped and hindered the study of aging in the brain. It turns out, even when older adults carry out the same tasks as younger adults, their brains may be functioning completely differently. “The functional changes are wild,” Hakun says.

When we complete mentally stimulating tasks, we engage neurons all across our brains. Distant neurons talk to each other through axons, which extend, tentacle-like, from the body of one neuron to tickle another with an electrical signal. Scientists refer to the network of axons in our brains as “white matter,” while the bodies of neurons and other cells in the brain are “grey matter.”

Starting in the early 2000s, imaging tools like MRIs gave scientists the insight that some cortical shrinking is common in older adults. But they uncovered another change in older brains, too: Imaging showed the structural integrity of the white matter in brains was a little weaker. In order to send electrical signals across brain regions, these neurons had to work harder than they would in a younger brain.

This phenomenon is called “hyperactivation,” and it’s not clear that it’s pathological—it could just be a normal part of aging. Practically, hyperactivation across older neurons means that they could get tired out faster than younger neurons. It may be why some healthy older adults experience gradual cognitive decline over time; their neural networks just can’t communicate through axons the way they used to.

But other older adults with hyperactivated brains can complete tasks just as well as younger brains. “That’s a functional reorganization effect,” says Hakun. Somehow, the brain has been able to reconfigure itself to carry out the same task despite its changes in white matter.

With the advent of the PET scan shortly after the MRI, researchers gained another insight into older brains. PET scans show scientists which proteins are present in different areas of the brain. Normally, brains keep themselves pretty clean, flushing out waste proteins that result from day-to-day cellular activities.

But some get a little messier over time—unbeknownst to their owner. Researchers have found that some perfectly healthy individuals have higher levels of a protein called amyloid-beta in their brains than others. It’s not clear why. It could be that their brains are making more amyloid than they should, or that their brains aren’t cleaning it out properly. In either case, extra amyloid usually isn’t great; it can inflame and eventually kill neurons, and it’s one of the main culprits of Alzheimer’s disease.

And yet having having higher levels doesn’t necessarily mean a person will go on to develop the disease. Some brains have gotten used to operating at the same level with more amyloid around, or have found ways to cope with its accumulation.

Which brings up an interesting question: What does “resilience” in the brain actually mean? Should scientists say resilient brains are those that seem to be able to cope with hyperactivation or buildups of protein that should impair their function, but don’t? Or should the resilient ones be those that are somehow resistant to these changes in the first place?

In a way, it doesn’t matter how the brain stays healthy—just that it does however it can. “The brain has a lot of redundant systems,” says Zelenski. “So basically, if one system gets knocked out, other parts will compensate over time.”

Scientists aren’t sure how, but it appears that experiences earlier in life that involve connecting more networks of neurons—classroom learning is a classic example—make it easier for brains to adapt to physical changes that occur later in life. Frustratingly, though, not knowing how these cognitive reserves form and keep the brain resilient means it’s difficult to harness this capacity into a treatment for dementia.

There is one other route that researchers could go to try to understand normal cognitive aging: the so-called Super Agers.

According to Emily Rogalski, a neuroscientist at Northwestern University, Super Agers are those who are at least 80 years old, but perform on cognitive memory tests the same way you’d expect someone in their 50s or 60s. Rogalski and her team have spent over a decade recruiting Super Agers to her lab and studying them over time. To date, she’s had about 80 participants, some of whom have passed away but donated their brains to the research team.

It’s hard to say how many Super Agers are out there. Rogalski’s lab merely advertises for them, and in some cases recruits them; it’s impossible to do a population estimate based on the people who come to her. However, she suspects they’re rare—which, for her research, would ultimately be a good thing. “It’s easier to see if they have some features in common,” she says.

Superficially, Super Agers aren’t a homogenous group. Rogalski’s set spans socioeconomic backgrounds, education levels, and ethnicities. Some have gone through significant trauma; one is a Holocaust survivor, and others have lost children at a young age. Some drink alcohol, some exercise regularly, and some need walkers or wheelchairs to get around.

They share some deeper features, though. For one thing, brain scans have shown that the front part of their brains, the cortex, is a lot larger than their normal peers. It still appears to shrink—but at a much slower rate than normal agers. They also seem to have more of a specific type of neuron, called von Economo neurons. Little is known about these cells, but they’re less common in people with severe mental illness, like schizophrenia—it could be that they play a role in social connections, Rogalski says. Super Agers tend to have stronger social networks than their peers, too.

This last trend is the most actionable for adults worried about their cognitive health. Scientists don’t know why having social connections would contribute to the brain’s resilience, but loneliness and social isolation can be early signs of  dementia.

Given the complexity of the brain however, there’s likely not one secret to its success. And each redundant system to keep it functioning is an opportunity for dementia researchers to someday find a successful treatment.

Katherine is a health reporter for Quartz based in Washington, D.C. She holds an M.A. in journalism from NYU's Science, Health and Environmental Reporting Program (SHERP 33), and her undergraduate degree is from Georgetown University's School of Foreign Service, where she studied science, tech and international affairs.